Spirituality is driven by the desire to maintain the feeling of being in control, whether it is in the act of connecting yourself to a god, divination to find answers you need, or rituals to attract what you desire. Conceptualizing that you create your own reality through your perception of life conflicts with the devotion to one spiritual expression because of its ability to alter that world view. The physical connection to nature in spirituality is encouraged by the creation of 15 hand-ground pigments crafted into a natural paint and anchored with pre-made acrylic.

“Power in Perception” follows the narrative of a figure approaching religion for the first time without a spiritual upbringing; because of this struggle of identity they desire to feel committed and whole by being dedicated to something larger than themselves. The three figures in this piece function as a representation of an individual exploring the duality of purpose in a higher power and the fear of commitment to a singular world view. The figure on the left portrays the Jungian concept of your “shadow-self”; the person inside you who is created by your deepest wants, desires, and coping mechanisms created by trauma (which developed the practice of “shadow work” in witchcraft). The figure in the middle is the present self, the part of you that is consciously revealed to the world. The present-self is physically holding down their idea of their “highest self,” the person they want to be and can grow into through spirituality. The relationship of three different entities within one person divides their ability to express who they are and what they want to become. The ultimate goal of this work is not to define your own beliefs, but to create a conversation with the viewer of questioning what we may never know. This piece asks an important question, rather than presenting the viewer with an answer, “who am I, and what should I believe in?” 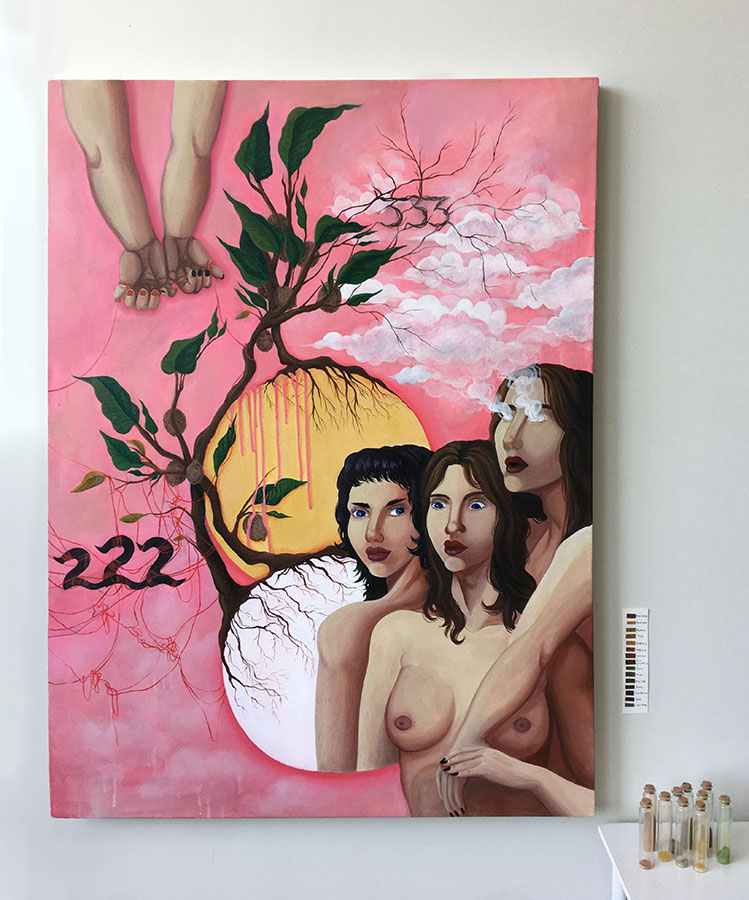