I don’t cry a lot, and it’s something that I definitely used to be concerned about, but it also led me to a certain level of dissatisfaction. Growing up I was eventually always told that crying is good and it lets you release everything emotionally pent up inside of you. When emotions became particularly overwhelming, I always tried to cry because I was told it would relieve me of all those stressful negative feelings, but no matter how hard I tried, crying never came naturally to me. I didn’t understand why it was so difficult, especially when I hear my friends say how they cry three times a day “just because that’s how it is.” I wanted to take this thesis as an opportunity to try and visualize this bodily occurrence for myself and others. Not being able to cry reminds me of the stiffness in an unnatural motion, so I decided to transfer that stiffness through elements of moss and metal. The moss reminds me of something being stuck in place for a long time, so it reduces the sense of normal bodily movement, and the metal specifically focused around the spinal cord area is meant to emphasize the rigidness throughout that area of the figure. While representing stiffness, these materials are also meant to represent build up. Trying to cry is a forceful movement for me, so the metal and along with that the pearls double in representation of an attempt to cry being forcefully blocked buy the dominating presence of the moss. The final important compositional decision is the golden skeleton. What I’m trying to show in this piece is something I want the viewer to interpret as an out of body or almost dissociative experience, so I decided to visualize that through showing the skeleton on top of the figure. I decided a skeleton would be the best way to represent this because while they are associated with the word “human”, they alone still have a very unnatural and unnerving appearance. The figures appearance is overall meant to help visualize this very stagnating and upsetting scenario for the viewer in a way that helps them understand how it feels physically, while also aesthetically presenting in a way that shows it’s okay and natural and some people just don’t “cry” how others do. 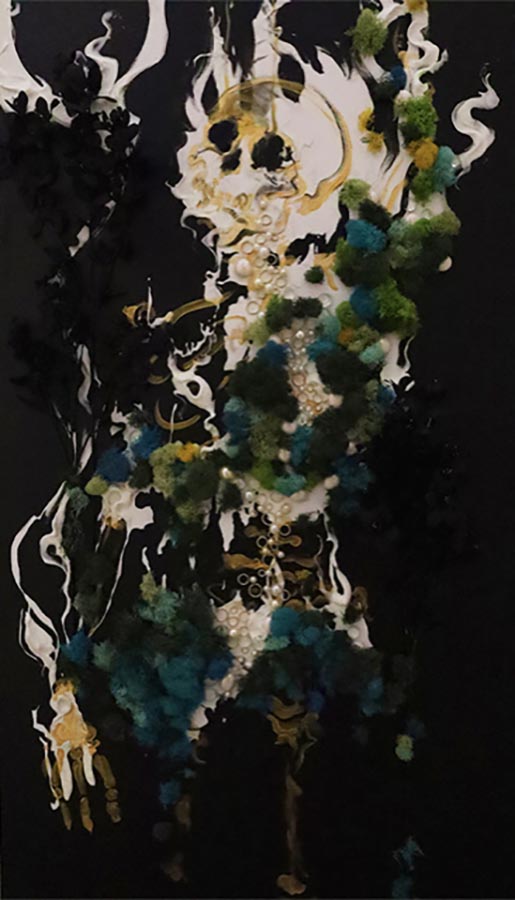