Theophobia, often referred to as Lord phobia, is the fear of God and religion, specifically those of the Christian faith such as Catholicism and Evangelicalism. It is more than just about the fear of God, but more specifically the fear of power and the wrath God could bestow upon you at any given time. Typically within many religious art pieces, the main focus is on Jesus’ face, typically depicted as holy and beautiful because Jesus is one of the main focuses around Christianity. But what happens to the power the figure holds within the religion when the figure has no face? For this piece, I wanted to make a religious-themed headdress without a direct connection to the over-barring presence of God that is oftentimes seen in art. By taking the normal concepts of Christianity out of my headpieces, the figure is not in a holy space but outside within a neutral environment and seems more connected to the environment around them overall. Along with this they are on the same eye level as the viewer, disconnecting the idea that religious beings are higher up physically and within the importance. Even though the piece is decorated in gold, it has elements that are tangled in and layed in such a manner that the being feels aged, which artistically is associated with wisdom, almost as if it has been on earth with us the entire time watching. I want the viewer to feel as if they are in the presence of a higher power but not feel scared or threatened; something that they do not need to fear and dread speaking to. God is supposed to be a symbol of love and acceptance, and because instead so many people now equate him with fear and rejection, I redesigned a religious symbol that I feel safe around and believe others might too. 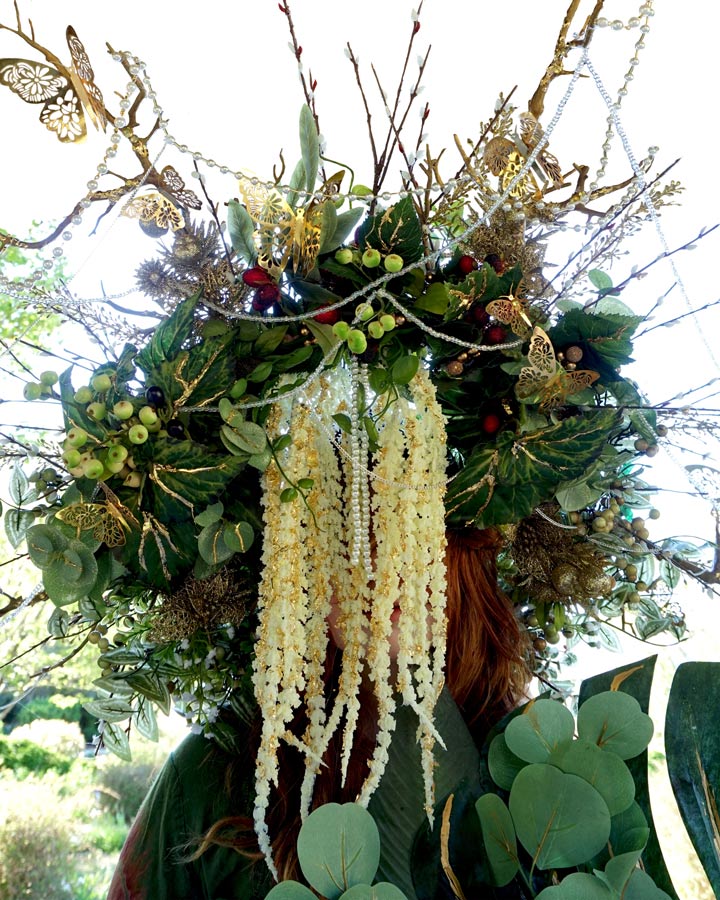