When Ryan Wineinger was 12 years old, he left his childhood home in Albany, New York, and headed with his family to Walt Disney World for the first time. While there, he experienced two performances at Epcot’s Millennium Celebration that made quite an impression on him. The shows told ambitious stories about connectivity, suggesting that mankind could be united over the next thousand years.

“While watching the final show, a lot of happy tears and warm feelings were shared among strangers. As a young kid who always felt a little different, this moment changed my life,” Wineinger said. “I left Epcot that night saying, ‘I don't know how, but when I grow up, I want to make things that connect people like this.’”

Wineinger, a 2009 graduate of the School of Design & Production’s undergraduate Scene Design program, is fulfilling this childhood wish at The Walt Disney Company, where he works as a Creative Director with Walt Disney Imagineering (the design and development studio for all of Disney Parks, Experiences and Consumer Products). For the last four years, he was a part of the Creative Studio team that helped bring Toy Story Land to life at Disney’s Hollywood Studios theme park.

Toy Story Land, which opened at Walt Disney World in June 2018, is inspired by the popular “Toy Story” movie franchise and its lovable characters, including Woody, Jessie and Buzz Lightyear. Visitors of all ages feel like a toy as they wander through an oversized version of Andy’s backyard and get to play with the larger than-life-toys and games that Andy left behind.

During a recent interview, Wineinger talked at length about his multifaceted duties at Disney, where he has worked for seven years. (Before Disney, he worked in professional theater for three years.) He also illuminated UNCSA’s impact on his career and his current role at Disney.

How did UNCSA help prepare you for your dream job at Disney?

The School of the Arts was the first place I learned how impactful a designed environment could be within any form of entertainment. I learned how essential it was for scenery, lights, costume and sound to respond to the live performance onstage by emphasizing a feeling or isolating a moment.

The School of the Arts was the first place I learned how impactful a designed environment could be within any form of entertainment. I learned how essential it was for scenery, lights, costume and sound to respond to the live performance onstage by emphasizing a feeling or isolating a moment.

Design can give an audience a sense of place and mood before a single word is spoken onstage. In designing our theme parks we maintain that same level of theatricality, but we often do this without actors performing a story for you. Instead, we infuse our environments with an immense amount of detail so the guests know upon arrival what world they’ve walked into, how they’re supposed to feel and what might happen.

Talk about some your principal responsibilities for Toy Story Land.

When developing a large land like this, my team and I spend the necessary time up front “writing our own script.” Besides learning about the films, who our primary audience was and the needs of the resort, we also studied the opportunities a new immersive land brings. We thought about how to stage our characters authentically, how to give them exciting things to do, and how to couple them in compelling ways, just like in theater and film. We documented this brainstorming in concept drawings, previsualization studies and physical models. 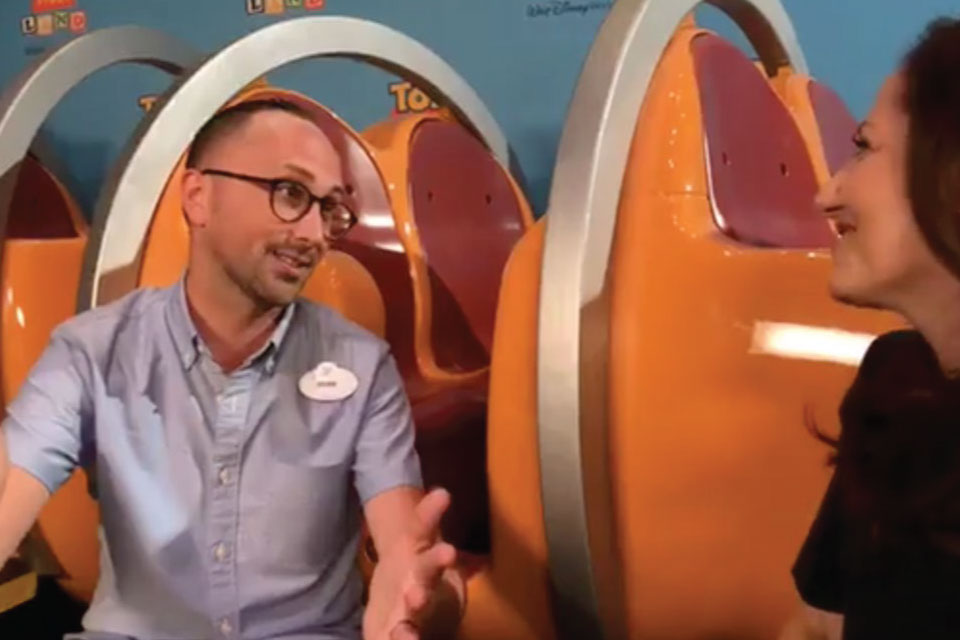 Once we knew that our ideas for the land would surprise and delight our guests on paper, we collaborated with designers, color artists, sculptors, show fabricators, construction managers and many other disciplines to bring the land to life. The construction phase is the most complex, including hundreds of individuals working on details throughout the land at the same time. I could be reviewing a lighting cue one minute and a sprinkler head location the next. The creative team reviewed every last detail so that the land looked and felt like a real, oversized backyard filled with toys.

Almost 10 years have passed since you graduated from UNCSA. What about your experience there still resonates with you?

It’s easy for an artist to feel insecure about their abilities, so the insanely talented community at UNCSA inspired a lot of healthy competition. And though the work ethic I learned trying to keep up still sticks with me today, it was my teachers and mentors who championed the most valuable advice. They reminded me to focus my competitive spirit inward, not outward, so I could both celebrate my present achievements and push myself to be a little bit better tomorrow. I attribute a lot of my success to this healthy, compassionate perspective, because it allows me to feel inspired by my peers and my industry, not intimidated by them.

You had a very clear idea of what you ultimately wanted to accomplish after UNCSA. But such certainty isn’t necessarily the norm among current or prospective students. What career advice would have for them?

Take advantage of the countless hands-on learning opportunities at the School of the Arts. Outside of school, you’ll find these experiences will fuel the momentum that will set you up for the rest of your professional life.

Take advantage of the countless hands-on learning opportunities at the School of the Arts. Outside of school, you’ll find these experiences will fuel the momentum that will set you up for the rest of your professional life.