With only months to go before graduation and no concrete plans for his future, Garrett Parker stopped in his tracks when he saw a notice from the Kenan Institute for the Arts posted in the School of Dance last spring.

The Institute was advertising a competitive, student-centered initiative for rising seniors, graduate students and recent alumni interested in designing their own internships with arts organizations or professionals in the U.S. Recipients of the newly established Kenan Portable Internship could receive up to $5,000 in support.

Never before had Parker heard of such an opportunity.

“Create your own internship experience — it was my dream. It almost seemed too good to be true,” he said. “There were three days left to the deadline. I was really busy, but it seemed very important, and it came at a pivotal point in my life.”

Parker graduated from the University of North Carolina School of the Arts in May with a BFA in contemporary dance. Shortly thereafter, as one of three artists chosen for the inaugural Portable Internship, he headed north to begin work with prominent choreographers Sidra Bell and Elia Mrak. 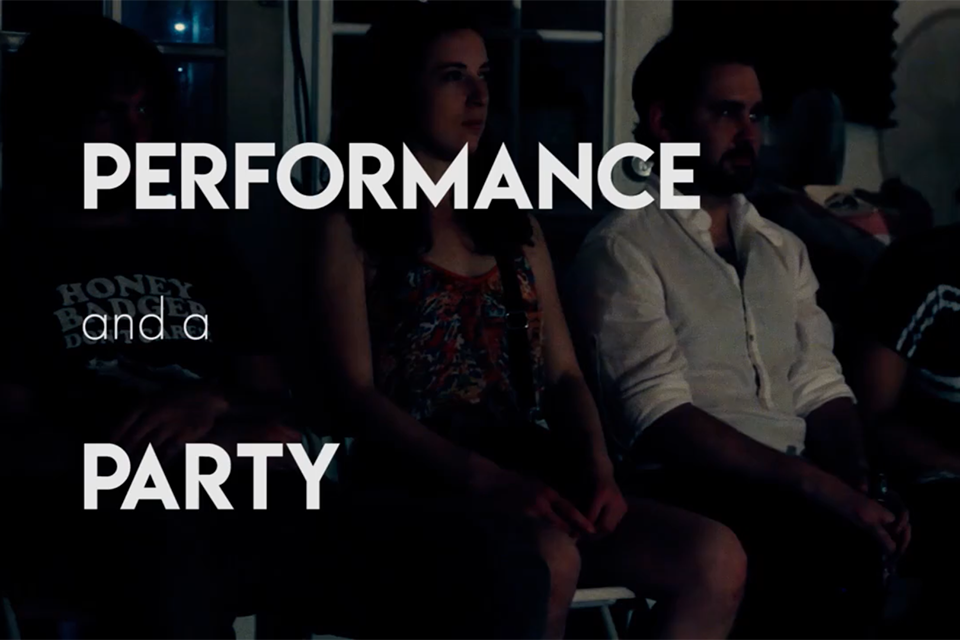 Garrett Parker performed in Performance and a Party, a collaboration with Hannah Wendel, Yiannis Logothetis and Elia Mrak and Garrett Parker during his Portable Internship.

Parker’s first stop: the New Jersey Dance Theatre, where Mrak had invited him to collaborate on a new work with a group of artists during their 2017 residency. Next up: New York City to work with Sidra Bell Dance New York and its summer intensive collaborations. In addition to assisting Bell and other faculty in classes that focused on risk-taking, creativity and the development of improvisational skills, Parker took charge of sharing the dancers’ experiences through social media and promotional documentation.

“From all these experiences I learned about the process of other choreographers and how they work, how they interact with their dancers and how they tell their stories. A lot of that rubbed off on me,” said Parker, who plans to stay in New York City and further develop the connections he has made.

“It’s been very fulfilling, and I am learning how I like to create my own art.”

The Kenan Portable Internship is part of the Career Pathways initiative of the Thomas S. Kenan Institute for the Arts and the UNCSA Office of Career Development and Community Engagement. The internships can run up to 10 weeks and are designed to support a range of activities, including experiential learning in a specific arts field, field research and experience to advance knowledge on a particular topic, and professional training and development.

“Over the past year, the Kenan Institute for the Arts has been evaluating the current Career Pathways program, and was very interested in creating a unique way to connect directly with current students and recent alumni to provide extraordinary opportunities for them to research, create and design their own internships,” said Lynda Lotich, associate director of the Institute. “This process allows them to gain significant professional development for continued learning in their field of study.”

The new internship gives emerging artists the opportunity to expand their skill sets and networks, Lotich said. Developing new relationships with arts organizations and professionals will give them needed support in the working world.

Violinist Yasha Borodetsky is working on a post-graduate Professional Artist Certificate in Music Performance at UNCSA. A native of Latvia, he earned dual degrees in violin performance and chamber music in Austria.

Borodetsky recently began his Portable Internship with a residency in Williamstown, Massachusetts, with United Solo, an annual international theatre festival for solo performances held in New York City. In the coming weeks, under the guidance of Omar Sangare, the creator and artistic director of the festival, he will create a one-man violin show to present at the festival in 2018. It will be anchored by a concept or story and will connect music making with other art forms, such as readings and a possible video installation.

I have never done anything on such a level of creativity — this is really outside my box. ... I think it will really open some doors and lead me to other artists and people from that industry ...

“I have never done anything on such a level of creativity — this is really outside my box,” Borodetsky said before heading to Massachusetts. “It makes me realize there are so many other opportunities outside standard classical performance. I think it will really open some doors and lead me to other artists and people from that industry who I might get new ideas and concepts from.”

While committed to excellence on a performance level, classical musicians tend to be traditional in their work, he said.

“It never crossed my mind to do anything of this kind. We don’t think so much about how else we can express ourselves or what else we can do. For my life course, I think it might actually be life-changing. And that all starts with the Kenan Institute.”

Borodetsky also will spend time in New York City networking with festival artists and seeing other shows for inspiration, feedback and advice as well as working with the festival’s general manager to learn about contracts, copyright and censorship issues, promotion and the like.

Composer and guitarist Nicholas Rich, who earned a master’s degree in composition from UNCSA in 2014, recently finished the internship he designed with the contemporary folk band Stray Local, based in Wilmington.

“I called and pitched the idea. They were really, really interested. On their end it was like a cover project, which they enjoy doing. For me it was like working with this really fine ensemble.”

Rich hails from a long line of musicians — his grandparents were folk, bluegrass and country musicians; his aunts and uncles leaned toward country and folk rock; his father played bass in a rock band.

As for Rich, his specialty is bluegrass guitar, but he’s into all kinds of music — from classical to old time to electronic and experimental. For the Kenan Institute project he wanted to return to his family’s folk roots.

He began writing in February, recorded draft demos in March and began rehearsing with the band in the spring. In late June, the musicians recorded the EP length album in Wilmington. The Kenan Institute program allowed Rich to hire an engineer and rent a studio for a few days.

“I sing a little bit, but hearing these real singers, hearing their voices join together on this music, it was absolutely chilling,” he recalled.

Rich, who performed his new piece with the band this fall at a conference during the National Folk Festival in Greensboro, called his experience “the perfect confluence of people and institutions and ideas at the right time.” He plans to continue songwriting and pushing the boundaries of classical and folk music.

I feel like I’ve gone from being a person caught between genres and musical roles to being an artist who has synthesized those roles into a distinctive voice.

“Having this experience of being a legitimate songwriter — and having this finished product to add to my repertoire — I really feel like a multi-disciplinary artist now,” he added. “I feel like I’ve gone from being a person caught between genres and musical roles to being an artist who has synthesized those roles into a distinctive voice.”

Each of the interns said that the opportunity encouraged them to be wildly creative without having to worry about finances. The program covers all expenses related to the internship.

“It may sound cliche, but it’s true that we do create so much better when there is no burden of financial difficulties,” said Borodetsky, who plans to become a university professor and continue exploring creative projects on the side.

“This is not your standard summer internship where you just do your thing and then go home. This internship gives you an opportunity to create from beginning to end — the whole concept,” he said. “You just have to be creative and come up with a good concept, and the world is yours.”