As she was completing her masters degree in folklore at the University of North Carolina at Chapel HIll, Stefani Priskos began to look ahead to what was next. The answer came in the form of a Creative Catalyst Fellowship in Diversity, Equity and Inclusion at the John C. Campbell Folk School in Brasstown, N.C., supported in partnership with the Thomas S. Kenan Institute for the Arts at the University of North Carolina School of the Arts.

As someone with a deep interest in folklore and traditional arts — and a growing desire to dig deeper into issues around diversity, equity and inclusion (DEI) — the sixth-month fellowship seemed like a natural next step.

The Folk School established the role to facilitate discussion among its staff and board of directors with an aim of identifying what diversity looks like at the institution, with the ultimate goal of producing recommendations on a Diversity Statement and goals moving forward.

As Priskos began her work, that focus quickly evolved, says Folk School Executive Director Jerry Jackson. "In reviewing staff responses to Stefani’s independent and group discussions," he says, "it was immediately obvious that Stefani’s work was conducted during a time when staff needed additional support due to the ongoing struggles of COVID. Stefani expanded her listening sessions beyond the DEI focus to allow staff to express their ideas for making the Folk School a better place to work, create and live a productive life." 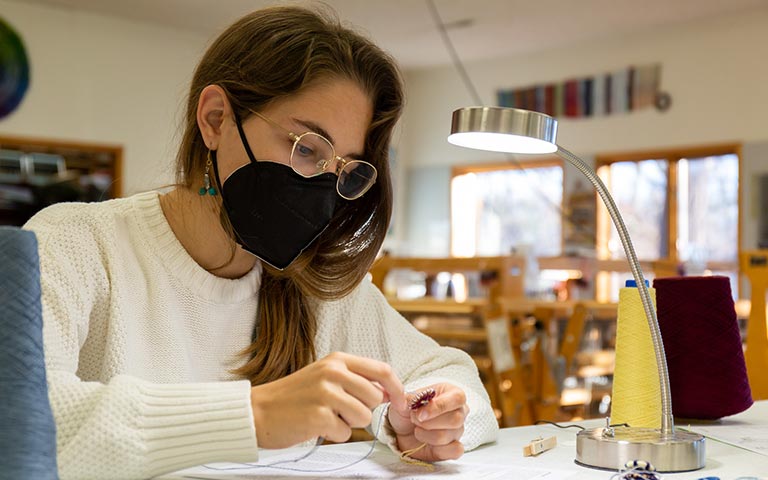 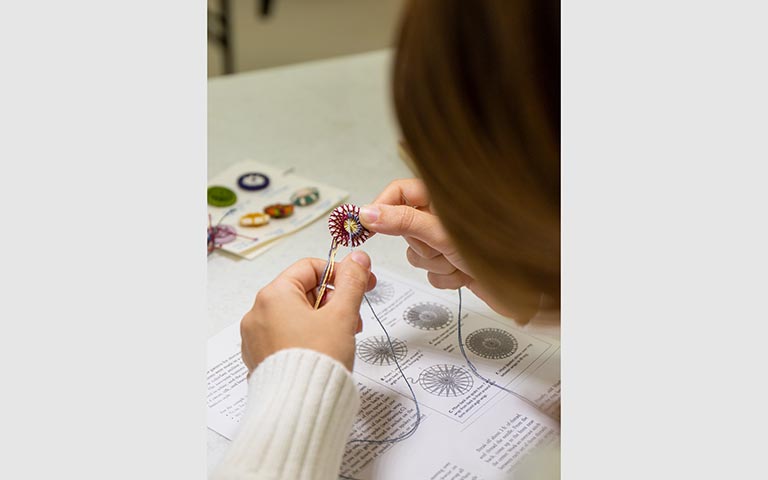 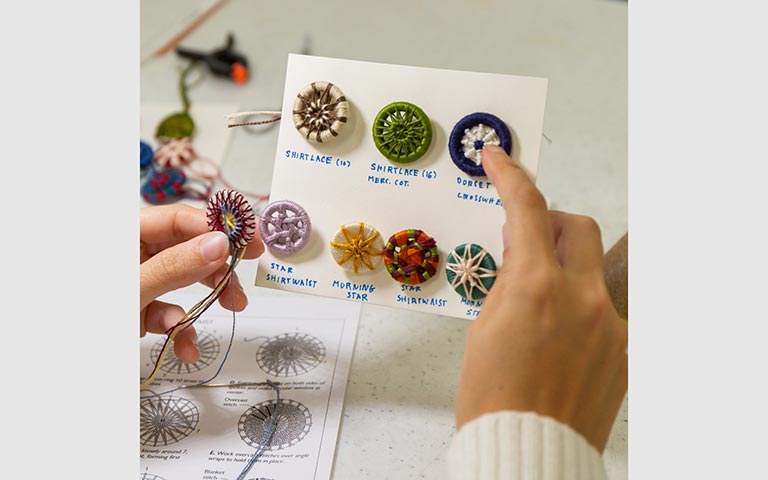 Priskos lived on campus during the Fellowship and, in addition to the listening sessions, she engaged in a two-day staff retreat and a staff satisfaction survey, all of which were geared for staff onboarding, making, history and DEI.

For Jackson, the fellowship and Priskos' work helped confirm the mission and work of the school and establish new guideposts. "Throughout the engagement process with Stefani, staff learned a great deal about themselves while exploring the complexity of DEI and how it fits within the Folk School model," he says. "Stefani’s work helped shape a path for management to advance staff needs and DEI education and provided the groundwork for upcoming management coaching, a new community engagement facility, staff development and data for the staff/board DEI Committee."

Can you describe your work during the Diversity, Equity and Inclusion Fellowship?

I’m not an expert in diversity, equity, and inclusion (DEI) or the Folk School, so my priority has been listening, participating, observing and reflecting back. I’ve had several tangible projects I’ve worked on, but what has been most exciting for me has been working with folks to hopefully lay the groundwork for the progress they want to see in the organization. It’s exciting to be at an organization where people care so deeply about its mission and are committed to values of kindness, creativity, togetherness and stewardship.

What this has looked like on a practical level is holding a lot of one-on-one and group conversations across the staff to answer the question, “Who do we want to be?” One of my main goals has been to make sure everyone — at all levels, and from all corners of the organization — is invited into and involved in this conversation.

It’s my belief that a diverse, equitable, and inclusive environment affects everyone and is everyone’s responsibility on some level, so the more it can feel like an 'us' issue rather than a 'them' issue, the better.

This all may sound very touchy-feely, but the idea is that by asking ourselves “who do we want to be” as an organization, we then can thoughtfully and strategically approach the question, “Okay, so what are we going to do about it?” It’s my belief that a diverse, equitable, and inclusive environment affects everyone and is everyone’s responsibility on some level, so the more it can feel like an “us” issue rather than a “them” issue, the better.

How does the fellowship help meet your goals professionally?

Throughout grad school, especially following the events of summer 2020, I was thinking a lot about what it means to be a socially engaged folklorist. As studiers of traditional culture, I think folklorists are uniquely equipped to think about how powerful forces like tradition, group identity, nostalgia and authenticity shape our lives, and the ways they can incite, support, and/or hinder meaningful change. My time at the Folk School has helped me think more deeply about these issues, as well as given me the chance to try out turning some of these thoughts into actions.

My background as a folklorist is in ethnography — which is just a fancy way of saying that you’re working with a group of people (say, old-time fiddlers) by observing, participating, documenting, and reflecting; then processing all of that information and looking for common threads, patterns, and meaning; and finally, communicating that information in some way, whether it’s a book, a festival, or a documentary film. Since ethnography is what I know, that’s the approach I’ve taken to the fellowship. This fellowship has helped me refine my process, especially in terms of how to make it as collaborative as possible. It’s also been cool to see how this method can be translated to a different purpose – in this case, helping an organization think through its approach to diversity, equity, and inclusion.

This fellowship has also helped me along my goal of getting to know my community, state, and region on a deeper level. I’m leaving the Folk School with a richer and more nuanced understanding of North Carolina as a state and Appalachia as a region. The Folk School has been an amazing place to connect with tradition-bearers of all sorts. More than anything, I am infinitely grateful for the incredible community and meaningful relationships I’ve found here.

Can you talk about your other work or projects, particularly your interests in folklife and cultural arts? What's next?

Sure! I’ve always been interested in traditional culture — music, rituals, language, superstitions, foodways, family traditions, all of it. But honestly, I didn’t know what a folklorist was or did until a few years ago.

I grew up in Alabama, went to college to study linguistics, and then lived and worked in New York City for a few years. Two things happened during that time that led me to switch paths: One was that I got very involved in shapenote (or Sacred Harp) singing, a type of four-part, a cappella, hymn singing that has origins in 18th century New England and strong roots in my home state of Alabama. I loved being part of this living tradition and getting to know singers from all over the country. 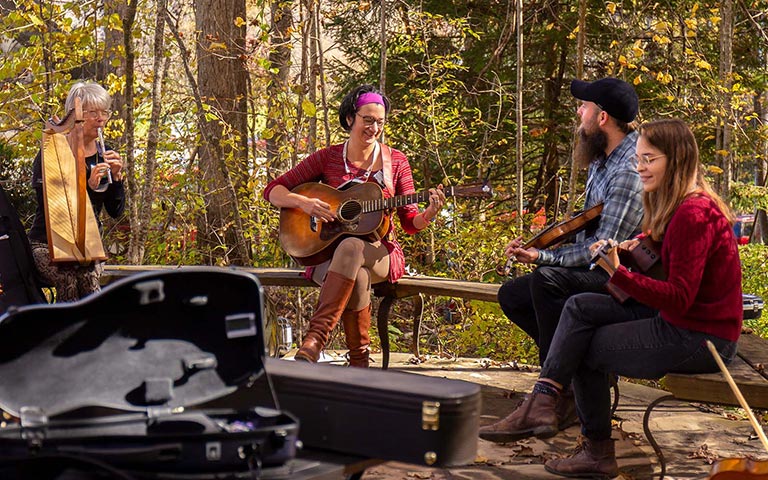 Shapenote singing also reintroduced me to my home state in a meaningful way. At the same time, I had started volunteering for the Queens Public Library as an oral history interviewer. It was so precious to get to witness people’s life stories, and I started to realize that this was the type of work that I cared about and wanted to do full time. One of my shapenote friends’ mom is a folklorist, and she was like, “Hey have you ever considered…?” And the rest is history!

My folklore master’s thesis project was a collaborative ethnography of the Triangle Threshold Singers — a volunteer group that visits and sings with dying individuals and their families in the Triangle region of North Carolina. They stay and sing soft, calming songs with families as their loved ones “cross the threshold,” so to speak. I joined the group, sang and made visits with them, and interviewed the singers about their experiences. In a period that was marked by communal grief and isolation, working with the singers consistently reminded me of the power of calling on creativity to find comfort, strength, and meaning in times of pain or uncertainty.

It was an honor to learn from the singers and to get to share the important work they do in their community. In addition to a written thesis, most of my conversations with singers are publicly available to listen to on the StoryCorps Archive website.

I can be interested in almost anything that has a good story, so I’m excited to see what comes next. My current dreamy idea is to produce a podcast on the songs we sing to our pets. If you have a song or a story, reach out!