The production will include excerpts from “Napoli,” one of August Bournonville’s most enduring ballets; George Balanchine’s “Symphonie Concertante,” performed to Mozart’s music of the same name; “Mass,” by Robert Battle, with a score by John Mackey; and Ming-Lung Yang’s "Convergence” (working title).

Tickets are $20, $15 for students with a valid ID, at www.uncsa.edu/performances or by calling the box office at 336-721-1945. The Stevens Center will be open at full capacity on the orchestra level. Audience members are required to wear masks.

"This year's Winter Dance pays homage to iconic works by some of classical ballet's most impactful choreographers," said School of Dance Dean Endalyn Taylor. "Their works have not only withstood the test of time but have provided significant opportunities for our students to demonstrate refinement within their artistic, kinesthetic and intellectual abilities.

“At the same time, Battle’s ‘Mass’ and Yang’s original work, ‘Convergence,’ offer the students a deep immersion into process that benefits greatly from everyone’s investment in the work and the world each piece creates.

“For the audience, this program is a chance to see the School of Dance at its creative best: diversified, enthusiastic and exceptionally skilled.”

Elisa Clark, who is staging Robert Battle’s “Mass,” studied at Juilliard and was a founding member of his Battleworks Dance Company from 2001 to 2006 before Battle became artistic director of Alvin Ailey American Dance Theater. Clark has assisted Battle on several commissions, including “Juba” and “Love Stories.”

The genesis for “Mass,” Battle has said, came to him from seeing Verdi’s “Requiem” at Carnegie Hall. He became absorbed in seeing how the choir moved and began creating movement by deconstructing the chorus.

“I believe that Robert is one of the most masterful choreographers of our time,” Clark said. “His craft in creating work is rooted in some of the greats who came before him – Martha Graham, Alvin Ailey and Paul Taylor – and he knows how to move bodies in space.”

Clark said that she tries to help young artists see that beyond the steps in Battle’s dances are how the dancers move in relationship to one another and in relationship to the space that they are in. She also teaches them that the process of making the dance is just as important as the end product.

“Part of the process in me coming in to stage the work and the process of their learning it is that it requires 100 percent of their presence,” Clark said. “It’s an opportunity for the students to value process as a practice.”

Working with two casts of 16 dancers, plus four understudies, Clark said, “As an educator, I’m always happy to provide an opportunity for them to learn transferable skills.”

In addition to having danced with Mark Morris Dance Group, the Lar Lubovitch Dance Company and at the Metropolitan Opera, Clark is an adjunct professor at several colleges and universities in the New York City area. 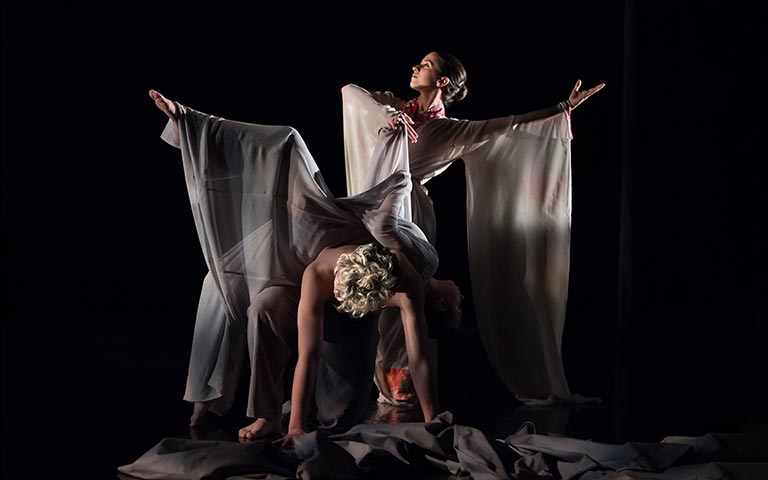 Dayna Fox, a faculty member at UNCSA, is staging “Napoli.” She assisted Raymond Lukens, the artistic director of American Ballet Theatre’s National Training Curriculum, when he staged the ballet for Spring Dance in 2015.

“It’s always challenging to teach a work that has a particular style,” Fox said. “The Danish style is unique in its intricate footwork and lots of jumping, and interesting use of upper body and torso with restrained arms.

“The three male variations are challenging and exciting, and our students are doing a great job. Whatever you give them, they just dig into it.”

Bournonville, who was ballet master of the Royal Danish Ballet, created “Napoli” while he was in exile from the court of the Danish king for not bowing to him at a performance.

“After his travels to Naples, Italy, Bournonville had been so impressed by the local color and the vibrancy of ‘a city in constant movement’ that he strove to capture that brightness and dynamism in his work,” Fox said in her program notes for the concert.

“The vibrancy and energy of the work is contagious for both the performers and audience alike, especially the grand tarantella to close the piece,” she concluded.

Ming-Lung Yang, who has been on the UNCSA School of Dance faculty since 2013, said that as a choreographer, he works slowly and that in the process of creating a piece, it can change.

“I don’t want to limit myself to one direction,” he said. “I prefer to have more options in my hands and experiment and see what is coming out and let the piece name itself.” The working title of his piece is “Convergence,” a revised excerpt from his "Feng Yun," which premiered at Tropentheater Amsterdam in the Netherlands and was a Best of 2011 Taishin Art Award finalist.

“For the past 20 years, some of my choreography has been contemporary, and some of it has more traditional Chinese and Eastern elements in it. I am trying to pull these styles together and see what comes up.”

Yang is working with two casts of 12 dancers, and the School of Dance Costume Shop is designing the costumes that fuse contemporary and Eastern styles.

He is using music written 300 years ago —Ting-Yui Liu’s "Ambushed from Ten Sides"— edited with layers of Western piano and percussion music.

“At times, it works in great harmony, and at times it works in dynamic collision, which creates huge tension,” he said. “The choreography and music are moving in the same direction. They both have equal position.”

Nilas Martins is staging George Balanchine’s modern ballet “Symphonie Concertante,” which was scheduled for Spring Dance 2020, canceled due to COVID-19. Martins has been a repetiteur for the Balanchine Trust and a principal dancer with the New York City Ballet.

In “Symphonie Concertante,” the large, three-movement work bears a very close relationship to its music, Sinfonia Concertante for Violin, Viola and Orchestra, by Mozart. The two principal ballerina roles correspond to the solo instruments — violin and viola, but they do not represent the instruments in any literal sense, Balanchine noted.

The School of Dance season will continue with Spring Dance, featuring a brand-new reimagining of "The Seven Deadly Sins" by guest artist Gina Patterson, April 21-24, 2022.