Ellen Rosenberg is about to complete her Narrative Medicine Certificate from Columbia University — the culmination of a two-year journey of teaching, learning and listening. Rosenberg, who teaches humanities, creative writing and theater history in the UNCSA Division of Liberal Arts, has been studying the practice of Narrative Medicine for five years and has seen a profound shift in her personal relationships and across all of her teaching roles.

Narrative Medicine was founded as a way to encourage medical practitioners to cultivate active listening skills and empathy for their patients. Rosenberg came across the practice through her work with the Wake Forest University Humanities Institute and School of Medicine and immediately saw the application to her work with artists, whose work is rooted in narrative.

"In the arts we're taught to have our critical eye out, but most of us don't really do it in a fully intensified way," Rosenberg says. "Narrative Medicine is a sharpening of the skills that creative people are already using. The practice of it has the capability of changing the way people relate to and open up to one another, with respect and without judgment." 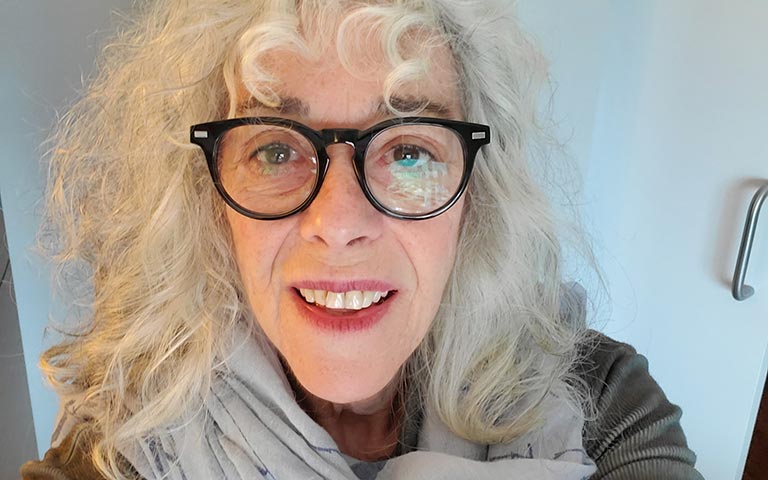 With the support of a Faculty Leadership Grant from the Thomas S. Kenan Institute for the Arts, Rosenberg was able to complete the Narrative Medicine Certificate this spring at Columbia, where the practice originated. Faculty Leadership Grants are awarded semi-annually to UNCSA faculty to explore new approaches to creative learning challenges; impact student learning outcomes; and produce creative ideas, among other goals.

Her certificate work has allowed her to deepen her practice, broaden the range of tools she uses and influenced her work with UNCSA students in courses like "Narrative Medicine as Performance/The Body," which incorporates her own theater background with this relatively new discipline.

What is Narrative Medicine?

The practice of Narrative Medicine was developed in the early 2000s at Columbia University, with the work of healthcare professionals in mind. Rosenberg explains, "Narrative Medicine is the application and deepening of skill sets borrowed from the humanities and the arts in all disciplines and applied to the work of healthcare providers. Conceived by literature Ph.D. and M.D. Rita Charon about 20 years ago, the practice works to break the intentional training of detachment given to doctors, clinicians, nurses and other health care providers as they learn their disciplines. Using all of the arts, Narrative Medicine helps practitioners to arrive at a fuller capacity for understanding our own stories and the stories of others."

While the practice was initiated for medical practitioners, the application is broad. "In my case, dealing with artists and craftspeople, their whole stock and trade is in telling stories," Rosenberg says of her Narrative Medicine work at UNCSA. "So, how do you hear a story and how do you tell a story?"

A class or workshop often starts with an icebreaker — perhaps something as simple as "Tell me the story of your name" — a quick writing prompt that encourages participants to contemplate and open discussion. Participants can then share what they wrote or reflect on their writing process with the group.

The bulk of a session is based around a chosen text, which can be anything from a poem to a film. Rosenberg's texts have included song lyrics, ballets, operas, music without visuals, movement without sound, film clips and works of art. She gives the example of Dante Gabriel Rossetti's painting "How They Met Themselves." 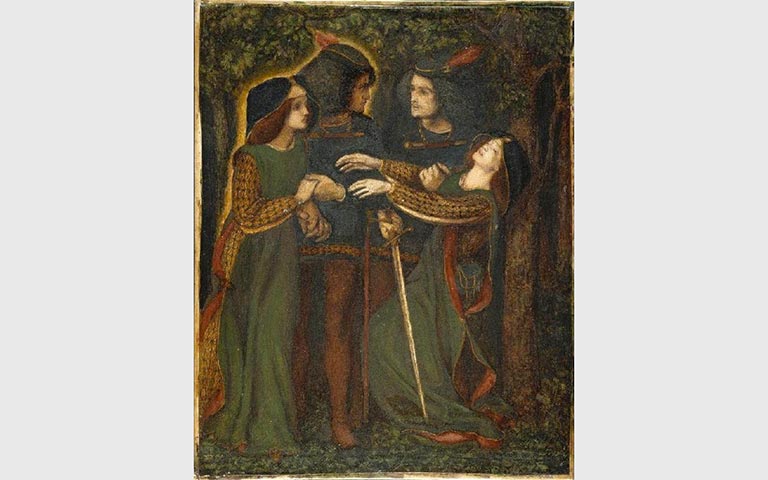 Dante Gabriel Rossetti's "How They Met Themselves"

The Narrative Medicine protocol includes a series of prompts that can be applied to any text, questions like "Whose perspective is being told?", "What's happening in the frame? Outside of the frame?" and "How is time handled?"

The details and themes of the painting (or song or video) begin to unfold and help facilitate internal reflection and dialogue with others in the group. "You're in a group. You come from different backgrounds, you have different political points of view, different life experiences and here's something non-threatening that creates shared ground," Rosenberg says. "It begins to teach you that you can talk to people with other points of view without making assumptions or judgments and by offering respect to someone else's experience."

Narrative Medicine, performance and the body

Over the last several years, Rosenberg has facilitated workshops for the Winston-Salem community through Wake Forest University, for faculty and staff at UNCSA, and at conferences across the country, most recently for the 2022 HEARTS Conference for Samuel Merritt University.

She first became interested in the ways Narrative Medicine could be applied in her classes several years ago when she had a student coping with juvenile diabetes. "I began to think about students across the years that had dealt with a variety of illnesses, medication issues, gender transition trials, gender and race-based emotional injuries and other damaging issues," she says. "I wanted to create a course for them to empower them with skill sets they can use to address injurious issues that arise for them. I knew there might be students who would enroll that might not immediately relate to issues of illness or injury, but everyone has a body."

With her own background in theater, she also knew that performance could go hand-in-hand with the Narrative Medicine practice. With that in mind, she created the "Narrative Medicine as Performance" course, subtitled "The Body," which she's now taught for three years.

At the end of the course, students choose one of their writings and create a corresponding performance. Students also choose their mode of performance, whether reading aloud, acting, or creating a work of art. That work has had its own outgrowth over the last few years and has resulted in STAR: Storytelling Through the Arts and Reflection, a community that is now open to the entire UNCSA campus. 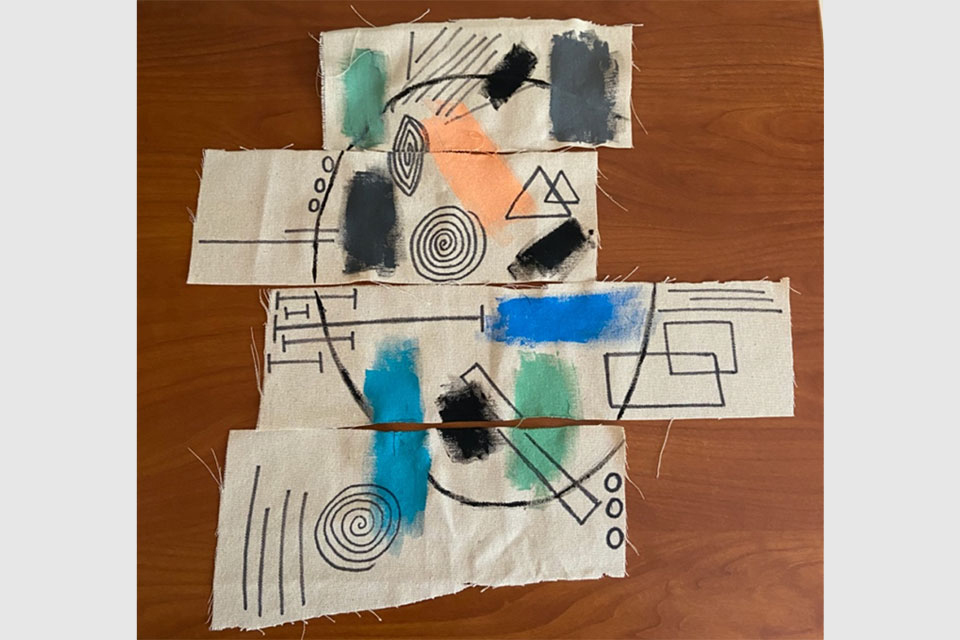 "Inside the Mask" by Julia Shoffner, a piece created for STAR: Storytelling Through the Arts and Reflection.

The completion of the Narrative Medicine Certificate has helped fortify Rosenberg's work of the last several years.

"I felt that if I was going to offer this to the school and the community, I should complete the certificate so that people felt confident I had the appropriate training," she says. The certificate courses themselves are led by Charon, Narrative Medicine's founder, and her small coterie of founding professionals. The program has solidified her training, while widening the scope of usable texts and opening up a network of other practitioners.

It's also helped lay the groundwork for her to expand her own practice. In addition to conducting multiple workshops over the past year, she also hopes to develop programs for people in hospice and those isolated by the COVID-19 pandemic.

The support of the Kenan Institute's Faculty Leadership Grant, which were used to help cover tuition expenses, helped make that possible.

The Kenan Institute has given me an amazing opportunity for growth and has helped me extend that to the whole school ... All of the grants that I've received have put me in a position of opening doors for students, faculty and the community, as well as opening doors for myself.

"The Kenan Institute has given me an amazing opportunity for growth and has helped me extend that to the whole school," Rosenberg says. In her more than 20 years at UNCSA, she has received multiple grants from the Kenan Institute, including one that funded the Kenan Encounters Visiting Writers Series (which Rosenberg ran) and another that supported interdisciplinary travel and research for faculty members to Scotland's Isle of Iona.