The Kenan Gallery, a two-level exhibit space in the library of the University of North Carolina School of the Arts, will exhibit work this fall by artists with deep ties to the campus and community. Work by high school alumna Ingrid Matthews will be displayed on the second floor, and art by former faculty member Jim Moon will be on the third floor.

Ingrid Matthews spent the first two decades of her professional career as a baroque violinist, performing extensively around the world while pursuing an eclectic education in the visual arts. In 2013, she began to devote more time to painting after stepping down from a 19-year tenure as music director for Seattle Baroque Orchestra, which she co-founded. 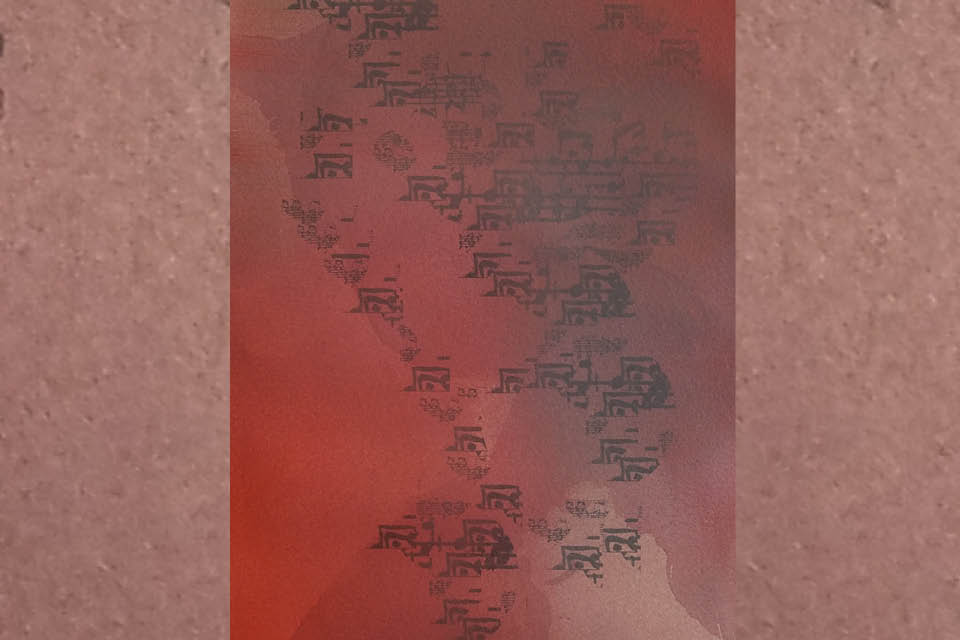 From "Resonance" by Ingrid Matthews

Matthews’ work explores the overlapping processes governing both music and art. “In my work as a visual artist, I have always found inspiration in music -- rhythm, line, the layering that creates harmony,” she said. “Resonance,” her show at UNCSA, explores “a more overt reference, using musical notation in the hand of J.S. Bach. The excerpts used are all from the Sonatas and Partitas for unaccompanied violin. 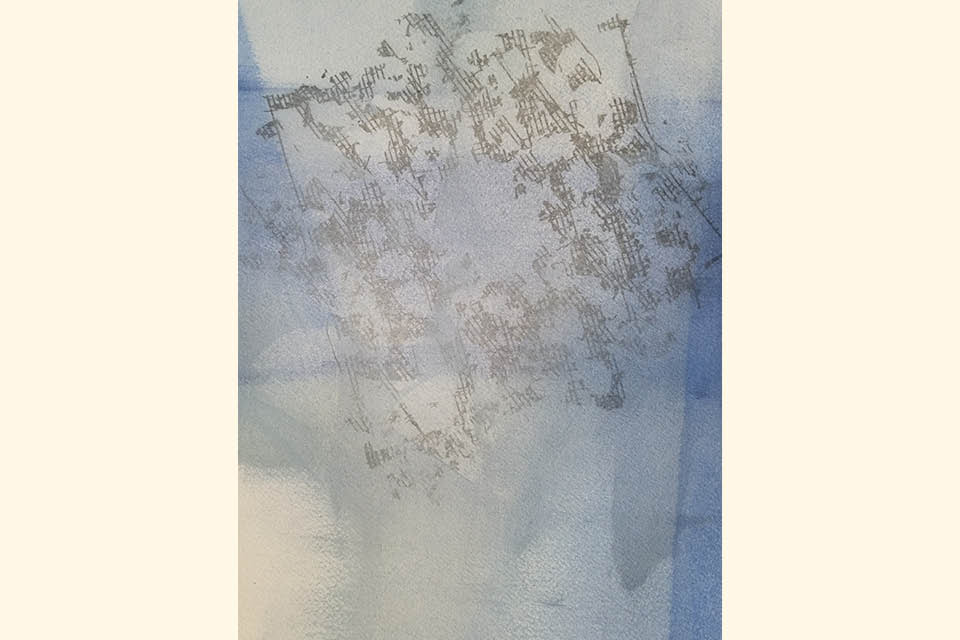 From "Resonance" by Ingrid Matthews

“This is music I have loved, studied, recorded and performed for over 30 years; working with it visually in this way is an extension of that intimacy,” she continued. “Some of these works reflect my feelings about the specific colors of different harmonic keys; in some I sought to translate the evocative character, gesture or affect of a particular movement; others arose simply as meditations on the graphic beauty of Bach’s notation and the mystery of written language.”

Born and raised in Winston-Salem, she is the daughter of Clifton Matthews, who retired in 2011 after teaching piano in UNCSA’s School of Music for 43 years. She studied piano at UNCSA as a high school student and then received her Bachelor of Music from Indiana University.

A reception honoring Matthews will be held in the second floor gallery on Tuesday, Sept. 11, following a concert with fellow alumnus and baroque musician John Lenti. HIP (Historically Informed Performance), the first offering in this year’s Alumni Artist Series by the School of Music, will be at 7:30 p.m. in Watson Hall. Matthews and Lenti will perform music of the 17th and 18th centuries using period instruments and techniques. The reception will begin at approximately 8:45 p.m.

Jim Moon, a North Carolina-based artist whose career has spanned more than half a century, founded Asolare Fine Arts Academy in Lexington and has mentored countless artists over the years. A native of Graham, he was instrumental in establishing North Carolina Dance Theater and the Alamance County Arts Council.

His work is included in public collections across the United States including the Museum of Modern Art in New York City; the New York Public Library; the Northwood Institute in Midland, Mich.; and Georgia Academy of Fine Arts in Calhoun, Ga. His  work can also be seen around the world in locations including the Art Gallery of Hamilton in Ontario, Canada, and the National Gallery of Macedonia; as well as throughout North Carolina, including the North Carolina Museum of Art, Duke University Museum of Art, UNCSA, and the president’s home at Wake Forest University. 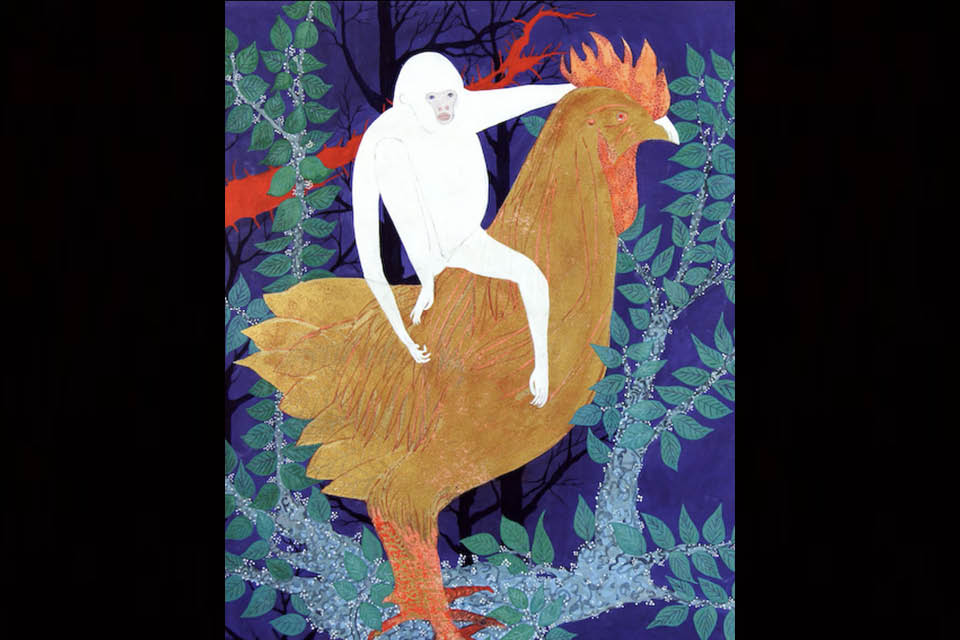 From "Caprices" by Jim Moon

The exhibit at UNCSA – his first local exhibit -- will include the eight remaining mixed media pieces of a collection he calls “Caprices,” created during the 1980s and previously shown in the Gallery of the American College in Paris; the Galleria Regina Cornaro in Asolo, Italy;  and the Calvert Collection in Washington, D.C.

Moon said the images started out as  a set of serigraphs, but he became bored with the process and started experimenting by hand painting on the images with tempera paint, sometimes completely painting over the original rooster to make it into another animal, or turning it upside down for a more bizarre image.

Moon studied at New York’s Cooper Union Institute of Art and Science; at the University of North Carolina-Chapel Hill; Accademia Pietro Vanucci in Perugia, Italy; and Richmond Professional Institute of the College of William and Mary. He did additional graduate study at Mexico City College, Boston Museum School and Columbia University. 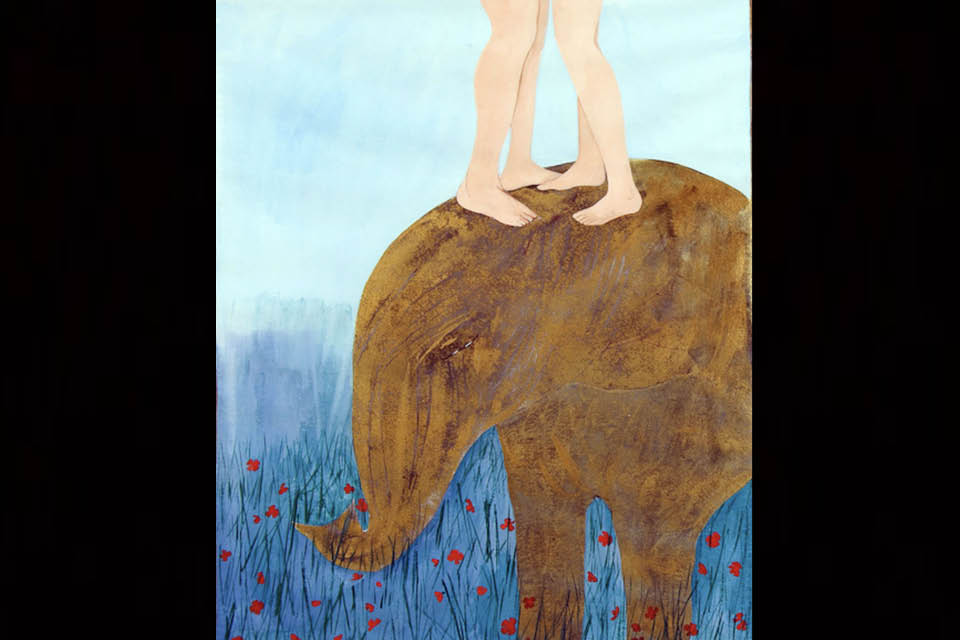 From "Caprices" by Jim Moon

Now in his 90s, Moon still runs the nonprofit Asolare Foundation, which is dedicated to the training and support of artists.

A reception honoring Moon will be in the third floor gallery from 5:30 to 7 p.m. on Wednesday, Sept. 26.