This performance has been suspended.

The University of North Carolina School of the Arts Symphony Orchestra concludes its season on Saturday, March 28, with a concert featuring three renowned guest artists in a program that includes a new double concerto by a Grammy-nominated composer that was co-commissioned by UNCSA.

"This is one of the most exciting concerts of the year,” said Interim Dean of the School of Music Tony Woodcock. “The School of Music is delighted to support the creation of new work by a composer of Christopher Brubeck’s caliber, and it’s even more meaningful that the composition celebrates the unique musical and personal partnership of Jamie Laredo and our alumna, Sharon Robinson. It’s critical that our students have the opportunity to perform exciting new works by contemporary composers along with the traditional repertoire. They will remember this concert throughout their careers.” 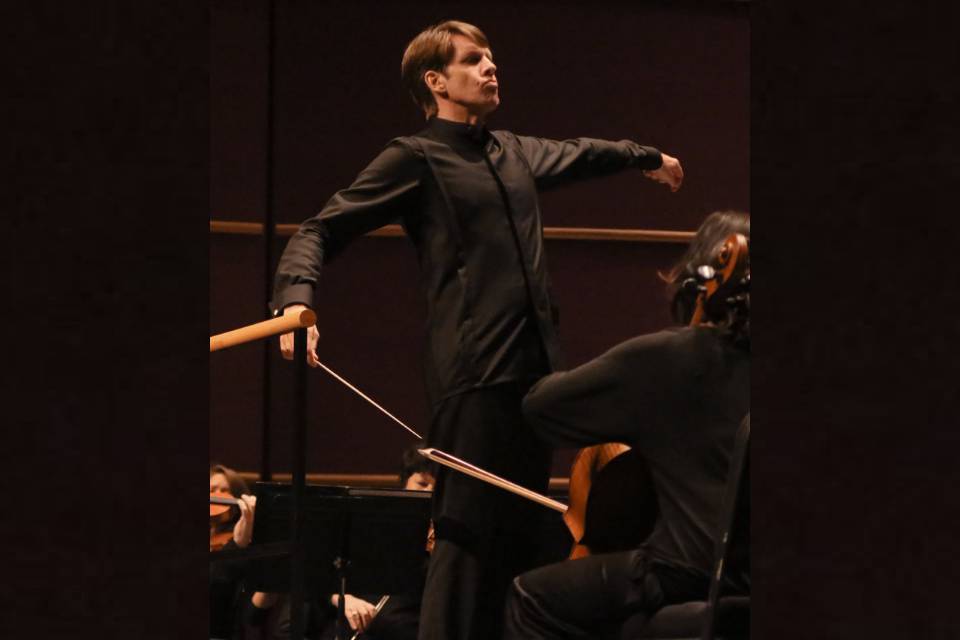 Butterman, who has been guest conductor of the Winston-Salem Symphony,  is currently the music director of the Boulder Philharmonic, Shreveport Symphony and Pennsylvania Symphony Orchestra. Recognized for his commitment to creative artistry, innovative programming, and audience and community engagement, Butterman has conducted many of the country’s preeminent ensembles, including The Cleveland Orchestra, Philadelphia Orchestra, National Symphony, Detroit Symphony and Houston Symphony.

“Michael Butterman is considered to be one of the most brilliant young conductors on the circuit,” Woodcock said.

Called “the foremost husband‐wife team in concert music,” Laredo and Robinson perform as the celebrated Laredo-Robinson Duo and the Kalichstein-Laredo-Robinson Trio (with pianist Joseph Kalichstein). The Laredo‐Robinson Duo has long been a champion of new works. In addition to a recent Andre Previn Double Concerto that has delighted audiences on both sides of the Atlantic, they have premiered and recorded double concertos by Richard Danielpour, Daron Hagen, David Ludwig, Ned Rorem and Ellen Zwilich. They continuously bring a fresh approach to double concertos by Brahms and Rosza and duos by Ravel, Handel‐Halvorsen, Schulhoff, Mozart and Kodaly. 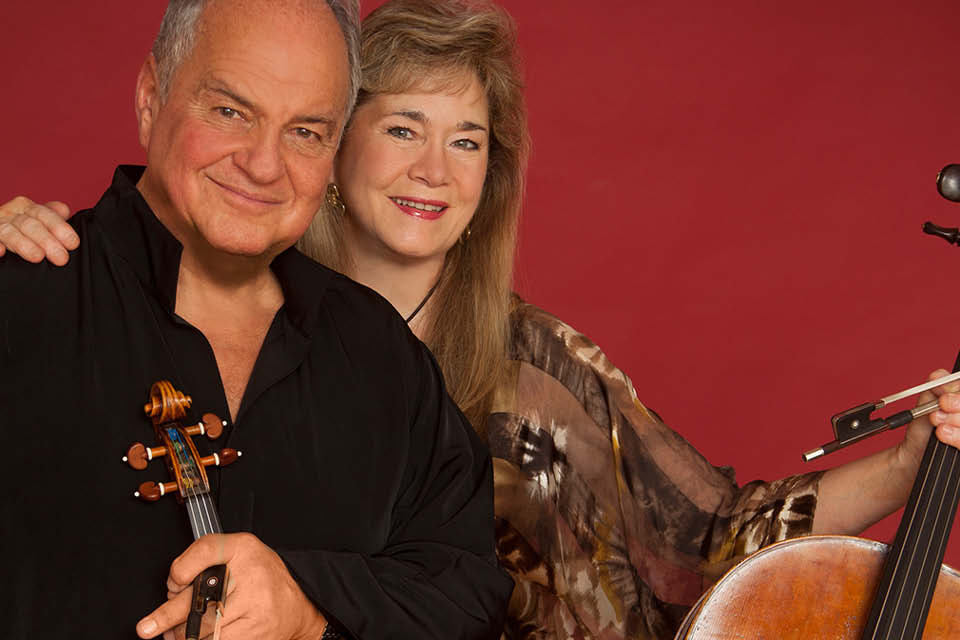 In 2016, Laredo conducted The Vermont Symphony Orchestra in a performance of  "Affinity: Concerto for Guitar and Orchestra” by Brubeck, a jazz musician from one of America's most famous musical families and a classical music composer whose works have been played by orchestras all over the world. Brubeck co-wrote with his father the Grammy-nominated "Ansel Adams: America," a tone poem.

Taken by Brubeck’s unique style of writing, Laredo proposed that Brubeck compose a double concerto featuring himself on violin and his wife on cello. The UNCSA School of Music was part of a five-member consortium to bring the work to life.

The program for March 28 will also feature an orchestral composition by Mexican composer Arturo Márquez, “Danzon No. 2,” and a multi-movement suite consisting of music from Sergei Prokofiev’s ballet, “Romeo and Juliet.”

About the guest artists

Michael Butterman has led the Boulder Philharmonic Orchestra to national prominence, resulting in an invitation to open the Kennedy Center’s inaugural SHIFT Festival of American Orchestras in 2017. He was principal conductor for education and community engagement for the Rochester Philharmonic Orchestra for 18 seasons and completed a 15-year tenure with the Jacksonville Symphony, first as associate, and then as resident conductor. 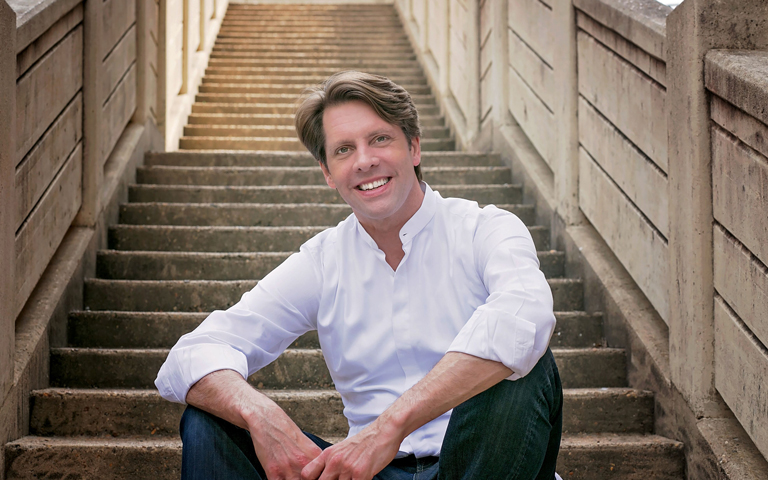 Butterman gained international attention as a diploma laureate in the Prokofiev International Conducting Competition and as a finalist in the prestigious Besançon International Conducting Competition. As the recipient of the Seiji Ozawa Fellowship, he studied at Tanglewood with Robert Spano, Jorma Panula and Maestro Ozawa, and shared the podium with Ozawa to lead the season’s opening concert. Earlier, he was sponsored by UNESCO to lead the National Philharmonic Orchestra of Moldova in a concert of music by great American masters.

Butterman’s work has been featured in six nationwide broadcasts on public radio's “Performance Today,” and can be heard on two CDs recorded for the Newport Classics label and on a new disc in which he conducts the Rochester Philharmonic and collaborates with actor John Lithgow.

The storybook romance of the Bolivian-born violinist Jaime Laredo and American cellist Sharon Robinson has, for nearly 40 years, been expressed in every facet of their lives. Joyous and sophisticated music-making, both separately and together, has earned them many devoted fans the world over. As much-in-demand solo artists, as the Laredo-Robinson Duo, and as members of The Kalichstein-Laredo-Robinson Trio with pianist Joseph Kalichstein for 35 years, Jaime Laredo and Sharon Robinson are among the busiest and most respected musicians in the world. In 2012, the husband-wife team joined the esteemed instrumental and chamber music faculty of the Cleveland Institute of Music.

Performing for over five decades before audiences across the globe, Laredo has excelled in the multiple roles of soloist, conductor, recitalist, pedagogue and chamber musician. Since his stunning orchestral debut at the age of 11 with the San Francisco Symphony, he has won the admiration and respect of audiences, critics and fellow musicians with his passionate and polished performances. His education and development were greatly influenced by his teachers Josef Gingold and Ivan Galamian, as well as by private coaching with eminent masters Pablo Casals and George Szell. At the age of 17, Laredo won the prestigious Queen Elisabeth of Belgium Competition, launching his rise to international prominence.

For 15 years, Laredo was violist of the piano quartet consisting of renowned pianist Emanuel Ax, celebrated violinist Isaac Stern and distinguished cellist Yo-Yo Ma, his close colleagues and chamber music collaborators. Together, the quartet recorded nearly the entire piano quartet repertoire on the SONY Classical label, including the works of Beethoven, Mozart, Schumann, Fauré and Brahms, for which they won a Grammy Award.

Laredo has recorded close to 100 discs, received the Deutsche Schallplatten Prize and has been awarded seven Grammy nominations.

In demand worldwide as a conductor and a soloist, Laredo has held the position of music director of the Vermont Symphony Orchestra since 1999. Laredo began his tenure as principal guest conductor of the Westchester Philharmonic in 2014. In 2009, Laredo and his wife were named the artistic directors of the Linton Chamber Music Series in Cincinnati, Ohio. As former artistic director of New York’s renowned Chamber Music at the Y series, Laredo created an important forum for chamber music performances and developed a devoted following. His stewardships of the annual New York String Orchestra Seminar at Carnegie Hall and the International Violin Competition of Indianapolis have become beloved educational pillars of the string community. A principal figure at the Marlboro Music Festival in years past, he has also been involved at Tanglewood, Aspen, Ravinia, Mostly Mozart and the Hollywood Bowl, as well as festivals in Italy, Spain, Finland, Greece, Israel, Austria, Switzerland and England.

Cellist Robinson is the winner of the Avery Fisher Recital Award, the Piatigorsky Memorial Award, the Pro Musicis Award and a Grammy nominee. Recognized worldwide as a consummate artist and one of the most outstanding musicians of our time, she is “a cellist who has simply been given the soul of Caruso” (Indianapolis Star). Her guest appearances with orchestras include the Philadelphia and Minnesota orchestras; Los Angeles Philharmonic; Boston, Baltimore, Cincinnati, Dallas, Houston, National, Pittsburgh, St. Louis and San Francisco symphonies; and in Europe, the London Symphony, Helsinki Philharmonic, Zürich’s Tonhalle Orchestra and the English, Scottish and Franz Lizst chamber orchestras. Robinson is the recipient of the Governor’s Award for Excellence in the Arts from the state of Vermont.

She previously taught at the Indiana University Jacobs School of Music. Highly sought after for her dynamic master classes, she brings insight to her teaching from the rare combination of her lifetime experiences as member of the Houston Symphony Orchestra, Ciompi String Quartet of Duke University and Kalichstein‐Laredo‐Robinson Trio, plus countless solo recitals and concerto performances.

Committed to the music of our time, Robinson works closely with many of today’s leading composers, including Ned Rorem, Leon Kirchner, Arvo Pärt, Stanley Silverman, Ellen Taaffe Zwilich, Joan Tower, David Ludwig, Katherine Hoover, Richard Danielpour and André Previn. She is admired for consortium building, putting together multiple presenters as co‐commissioners of both chamber music works and concertos with orchestra. For the Kalichstein‐Laredo‐Robinson Trio’s 35th anniversary, she gathered 12 presenters to commission Ellen Taaffe Zwilich’s Quintet, and for the 35th anniversary of her marriage to Laredo, she compiled eight co‐commissions for Richard Danielpour’s Duets.

In 2015, Robinson established the Cleveland chapter of Music for Food, which has raised funds to provide over 3,000 meals for area residents.