Water the Band has many UNCSA Music connections

When the members of Water the Band came up with the name for their first album, “Everyone’s Home,” well over a year ago, little did they imagine the title resonating quite the way it does at its release in 2020.

The title “Everyone’s Home” is an homage to the creation of the songs on the album by sisters and UNCSA School of Music students (and alumni) Madelyn Ward, Bella Ward and Alexis Ward, with brother-in-law Hadrian Pollard. The songs were written while the foursome was gathered at the Ward parents’ home in Chapel Hill, North Carolina, during summers and breaks from school over the last several years.

This album was a long time in the making.

It runs in the family

The Ward family home has always been a hub of creativity, says Bella. “We grew up playing music and come from a big family of artists. When we were bored in the summer, my dad made us do talent shows,” she laughs. “Whoever wrote the best song won.”

Both Ward parents, Matthew and Kailani, are artists. Kailani moved to the United States from Indonesia to pursue ballet, “so she knows the sacrifice involved in the arts,” Madelyn says. Older sister Rohima Ward is a graduate of the ballet program at UNCSA (HS Dance '16).

Madelyn and Bella write poetry. In fact, Madelyn is currently working on her own compilation of poems, and publishes poetry on her Instagram account.

Although their tenures at UNCSA have overlapped at various times, it was in returning to their parents’ home over the years that they were able to truly combine their various musical talents and poetry. All three sisters credit Hadrian as the catalyst to putting their words and music together in a coordinated fashion as songs and, eventually, an album. 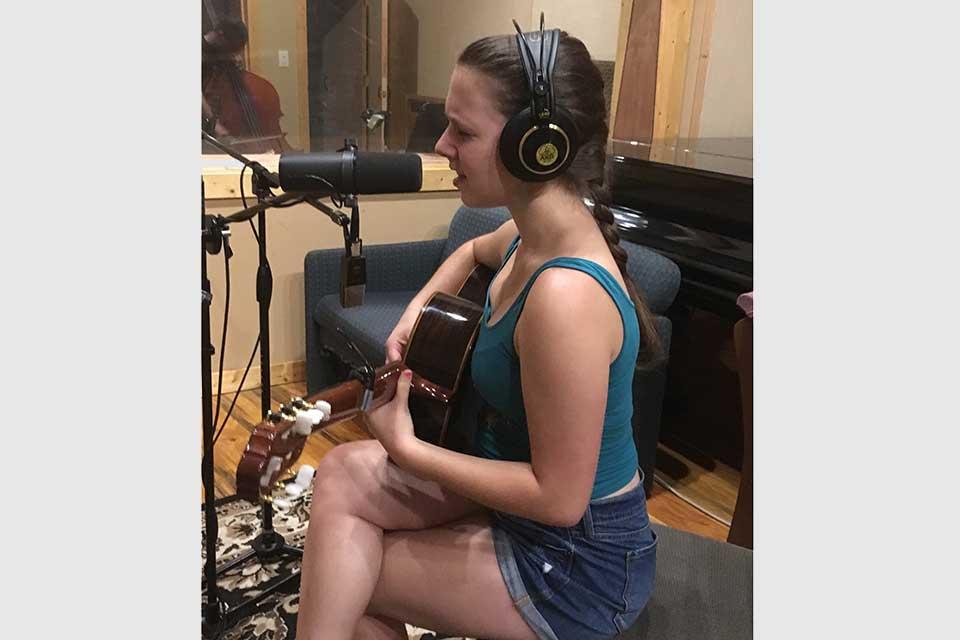 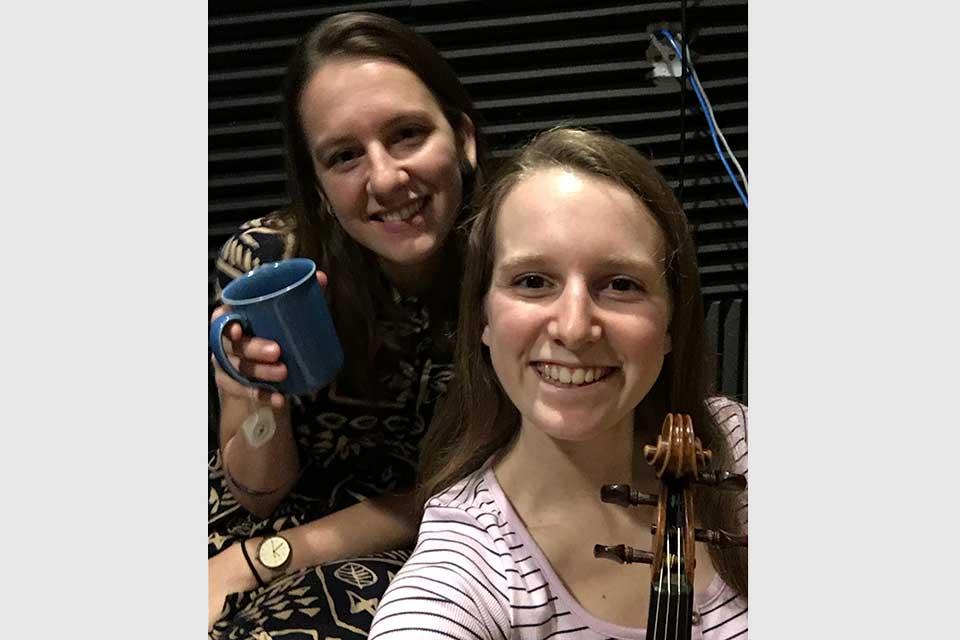 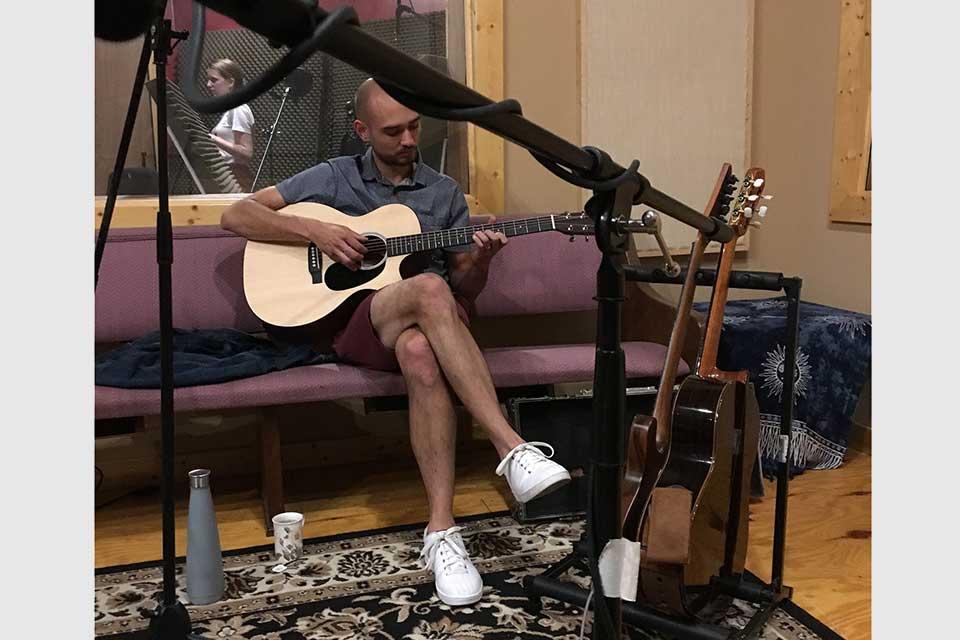 What started out as living room jam sessions grew organically into an album, with the encouragement of their parents, although that was never the original intent. “We eventually caved to the pressure,” Bella laughs, and they began the process of recording the album in the summer of 2019.

“Everyone’s Home” was recorded at Ovation Sound in Winston-Salem, with percussion and bass by UNCSA alumni Bobby Thomas (BM Music '19) and Solomon Caldwell (BM Music '20). It was released in August 2020.

“The album is really four unique voices that are complementary to one another,” Madelyn says, with different songs written or directed by different band members. The songs reflect the time and diversity of their lives and experiences. “There is a lot of personality, the album is dynamic.”

For the Wards, working with family has meant many different things—combining their individual talents into a cohesive project, learning from one another and working through challenges.

“One thing I’ve learned from this is that we can get through anything,” Alexis says. “Our family bond really feels unbreakable.”

“The release of ‘Everyone’s Home’ celebrates several years of working together,” Bella says, “and I think we have gotten to a place where we look up to each other as individual artists each in our own right, and have learned to harness our differences for productivity rather than butting heads.”

And, says Hadrian, creating an album as a family allows for a different pace and timeline. “This album was born from just hanging out over the summers and winter break,” he says. “Over the course of a few years we had a whole body of music that we patched together into a cohesive album. With friends, I’ve often had these intense creative bursts, but with family we’ve been able to slowly reel the music out and as a result are really proud of the final products.”

As members of Water the Band, Madelyn, Bella and Alexis have seen different (and sometimes subtle) ways that the UNCSA community has influenced their music and songwriting.

For Alexis, the choice to attend college at UNCSA is a recent one that presented its own challenges and reflections. “I was choosing between the New England Conservatory of Music and UNCSA and it was a difficult decision,” she admits. “But a big part of why I chose UNCSA is because of the freedom—financially and, as an artist, creatively.”

We’re not writing classical music, but we do have classical training. Being students at UNCSA has helped all of us expand our genres. And, personally, I would never have discovered other inspiring artists out in the world if not for my peers at UNCSA.

Their classical training has also found its way into Water the Band’s music. “We’re not writing classical music, but we do have classical training. Being students at UNCSA has helped all of us expand our genres,” Madelyn says. “And, personally, I would never have discovered other inspiring artists out in the world if not for my peers at UNCSA.”

Because of that classical training, Bella says, she has the technique to draw from for her songwriting. “On the flip side, I would never be satisfied writing songs and poetry if I was not also studying classical music. At UNCSA I feel I have the support and inspiration from the community to do both.”

We asked each member of Water the Band to choose a favorite or meaningful song on “Everyone’s Home.” Here are their picks:

Madelyn: “Passing Fear”
“I’ve just always really liked that song. Whenever we play it, there are no hiccups, no mistakes. It’s always a satisfying experience.”

Hadrian: “Let Them Do The Clearing”
“A lot of the songs were tough to finish. They needed reworking and instrumentation and layers of harmony to feel done. This one seemed to write itself. The violin part just slid right in. And the process of recording it was just as smooth and easy. It was the last song we did after a long day in the studio, and the whole thing just clicked into place. Now when I listen to it, I get that smooth, easy feeling that’s been with the song since it was first written.”

Alexis: “Salmon Song”
“This is one of our older songs. I’ve just always thought it was so beautiful and it’s close to all of us. When we’d have salmon at a meal, our dad would always wax poetic about the righteousness of the salmon. But it really is righteous. There’s just this incredible connection to the animal and our family through storytelling.”

Bella: “Shanti”
“My favorite song changes a lot, but currently I’m going with ‘Shanti.’ The imagery is strong for me. I hear a call to adventure, a pull to the West. It has nostalgia for a vast and free American landscape. I see myself running among wild horses through the desert or lying on my back and gazing up at thousands of stars, twinkling throughout the canyons.”

Listen to the entire album on Spotify or any of the platforms listed on Water the Band's website.