In the wake of the COVID-19 pandemic, many drama schools have shifted their auditions to the virtual space, a move that comes with its own unique set of challenges and opportunities. In the UNCSA School of Drama, Director of Recruitment Quin Gordon says it's important to the school to give each applicant a live audition experience through video conferencing. This kind of audition blends the interactive experience of an in-person audition with the parameters of being on camera.

"It is a long-held core value in the School of Drama that every candidate that wishes to apply, receives a live audition slot regardless of their competitiveness for our program," Gordon says. "Even as the pandemic has forced many peer institutions to lean more heavily on pre-screens, we attempted to replicate the traditional audition day on Zoom this past cycle."

While the content of video auditions is obviously critical, it can often be the details of an actor's presentation that stand out. The audition is usually the school's first impression of applicants' acting techniques and personality, so it's important to minimize distractions — and make sure the focus remains on the actor.

With that in mind, Gordon shares a few acting tips, with an eye on the details, that can help optimize the experience for actors and auditors alike.

1. Make sure your eyes are connecting with the viewer

One of the main keys to a live video audition is the actors' eyes. "You want to have the viewers' eyes directed to you," Gordon says. "So anything that impedes your eyes is doing you a disservice."

He recommends framing yourself from about waist up, with your eyes about two-thirds of the way up the screen. Nothing should be blocking or covering your eyes. 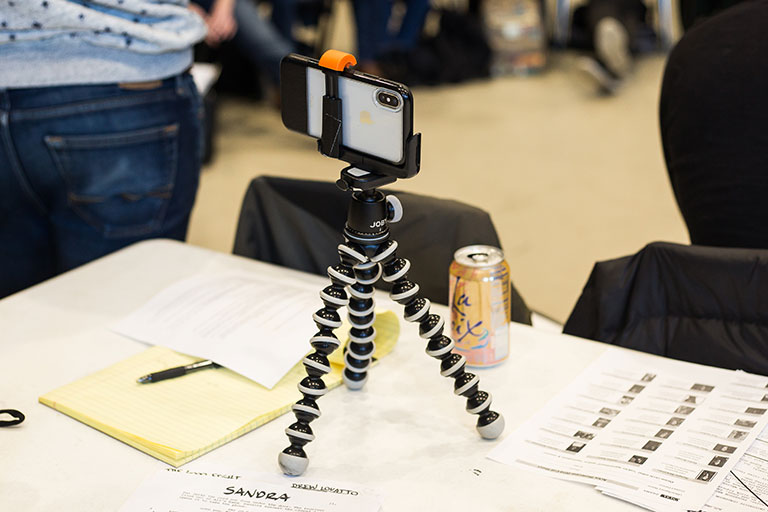 Try using a tripod (or stack of books) for your recording device to make sure your video is stable and that you're eye level with the viewers. / Photo: Roxanna Peykamian

Finally, don't look directly into (or "spike") the lens, but keep your eyes just to the left or right of the camera.

2. Know where you are within the frame

One of the simplest and most effective acting tips Gordon shared is for actors to be aware of how and where they appear on camera. This can be difficult to monitor in the middle of a live video conference, but there are several things you can do ahead of time to prepare.

"I suspect some applicants might feel stuck in their space," Gordon says. "You can still have free range of movement." In fact, auditors want to see you move — in this case, within the depth of the space (toward and away from the camera). "Depth is important on camera."

The key to knowing where you are on camera can be accomplished with a simple technique. Set up your camera in a stationary position ahead of time (on the tripod or box, as mentioned). Move around within the frame of the camera, and set marks on the floor when you leave the frame, so that you'll know when you are no longer visible.

3. Think about what's behind (and around) you, too

Think carefully about what appears on camera — and how.

"Position yourself on a neutral background," he says. Make sure there are no distractions behind you. Bookcases, artwork on the wall and busy prints all distract the viewers' eyes away from the actor.

Backdrop colors are trending dark, he adds, typically gray or blue. Anything too bright or busy will overpower you and become the most dominant thing in the frame. Likewise, make sure your clothing complements the background, while still allowing you to be the focus.

And place your light source behind the camera so that you're front lit, instead of behind you, where the lights might create a glare on screen.

4. Borrow acting tips from the professionals

None of this requires you to be in a fancy space, Gordon adds. In fact, if you follow some of the techniques of the professionals, you need just a few basic resources, like the stack of books mentioned above.

"Many professional actors have a 'self-tape wall,'" he says. If your resources (or spaces) are limited, you can pin a sheet up over an empty wall. Having a consistent or dedicated space aids with setup and adds a sense of familiarity while participating in auditions or recording self-tapes.

Another vital element, particularly for auditioning students, is to make sure the space you choose is somewhere you can be alone and don't feel restricted or restrained in any way. "We want you to feel completely uninhibited in your work," Gordon says.

5. Embrace the opportunity to be yourself

At UNCSA, the School of Drama works to create an environment where auditioners feel comfortable and have the ability to connect as people.

"Everyone performs at their best when they feel relaxed, so it doesn't do us any favors to create an environment that is intimidating or unfriendly," Gordon says. "We always end every audition with a quick interview to get to know that candidate better. We want to know the things that a candidate nerds out about — hobbies, favorite novels/movies/music — we're genuinely curious!"

It felt like [they] were trying to get to know me as a person and an artist and that they genuinely wanted me to succeed ... I felt safe to put my true self out there.

For Emma Fagin and Julia Ott, both of whom were accepted to the School of Drama’s undergraduate program, that audition environment made a difference and allowed them to open up and take risks. "It felt like [they] were trying to get to know me as a person and an artist and that they genuinely wanted me to succeed," Fagin says. "It was very open and conversational and I felt safe to put my true self out there."

"Even though we were not physically together, I still felt a genuine connection with Scott [Zigler] and Quin, and was able to bring my authentic self and voice into the space," adds Ott. "In the UNCSA audition, being on Zoom did not matter because the welcoming environment allowed me to transcend the screen, take risks and just have fun!"

6. Put your best effort into your entire application

While this doesn't necessarily fall into the category of "acting tips," it's important to make sure you don't neglect the other pieces of the application process. Now, more than ever, the School of Drama is looking closely at all components of the application. "We are really weighing all aspects of a candidate's file very closely this year," Gordon says.

Accepted student Deanna Hennelly says the fact that Zigler and Gordon read her essay was an important part of her audition. "Scott and Quin read my college essay beforehand and we had a very enlightening conversation about the specifics in it," Hennelly says. "[They] took the time to know me as the person I was before I auditioned so we could use our interview time to the fullest and talk as if we had known each other for longer than 20 minutes."

Auditors are aware of the limitations of the modified audition process. At the same time, the acting skills and ability to adapt they look for in typical years remains largely the same.

We're looking for actors that aren't viewing the audition as a limitation and are finding ways to make the camera their friend.

"We're looking for actors that aren't viewing the audition as a limitation," he says, "and are finding ways to make the camera their friend."