Disney's latest blockbuster, "Jungle Cruise," features sweeping Amazonian landscapes, elaborate set pieces and supernatural visual effects — all of which were brought to life with the help of UNCSA alumni throughout all aspects of the filmmaking process.

The film, inspired by the Disneyland attraction of the same name, is set in the 1910s and follows scientist Dr. Lily Houghton (Emily Blunt) as she journeys down the Amazon River in search of a legendary tree with mystical healing powers. Houghton is guided on her adventure by skeptical riverboat captain Frank Wolff (Dwayne Johnson). 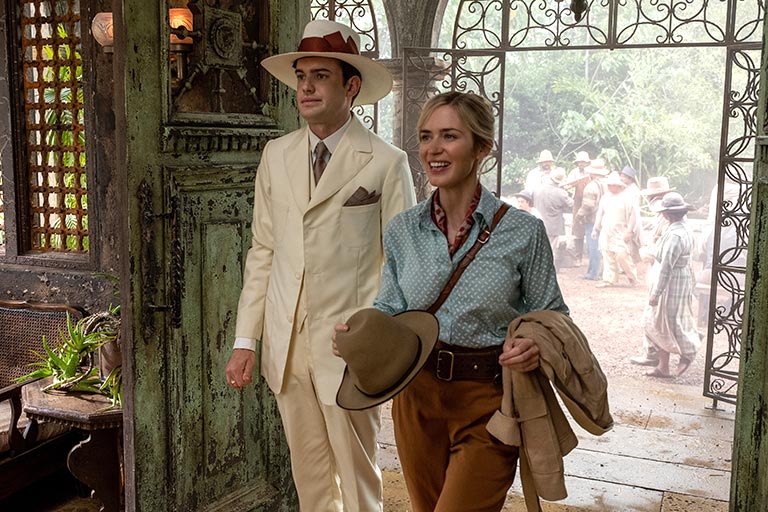 "Jungle Cruise" was shot largely in Atlanta, where many UNCSA graduates now go to work their way into the city's burgeoning film industry. We caught up with several School of Filmmaking alumni as they reflected on their work on the film and what it's like to work side by side with fellow Pickles on the job.

"The sheer scope of 'Jungle Cruise' was enormous," Krochmal says, "which added to the complexity and excitement of all of these moving parts. One day I could be working alongside model makers building a treehouse set, and the next day directing the construction team to place carved styrofoam boulders the size of cars on the finale set. This dichotomy of the ever-changing day to day is what makes me excited to come into work each day."

The role of set decoration buyer, which Cornell has now held on several major projects, has its challenges and rewards. Buyers are assigned the task of sourcing items for particular sets by the decorator or assistant decorator. "You begin research, compare prices and order samples. This could include tasks like shopping local vendors or taking pictures and measurements to catalog for the decorator. Then you present items for approval," Cornell says. "Pieces are drawn to scale in a floor plan or elevation to check that they will fit and calculate quantities before they are purchased."

As a set decoration production assistant, Craver worked closely with Cornell and on other tasks for the set decoration team. "Some tasks like getting lunch, taking checks to vendors and picking up printed graphics were a great way for me to get to know Atlanta since I’m originally from North Carolina." That tactic seems to have worked — Craver just wrapped her first buying position on an ABC pilot and is now set dressing for a new Hulu show.

Joseph Blankinship VI (B.F.A. Filmmaking '14) worked as the Libra head technician for the film's second unit. The Libra head is a stabilized camera mount, used to attach camera systems to various platforms and able to be controlled remotely. In this case, Blankinship says, the Libra head was primarily used on telescoping camera cranes.

Blankinship, who has been working on the upcoming "Black Adam" film (also directed by Jaume Collet-Serra and starring Johnson), says a typical workday on the "Jungle Cruise" set was anything but. "A typical 'day' was more than likely a hard overnight — we did a lot of night work for a scene with a lot of fire," he says. 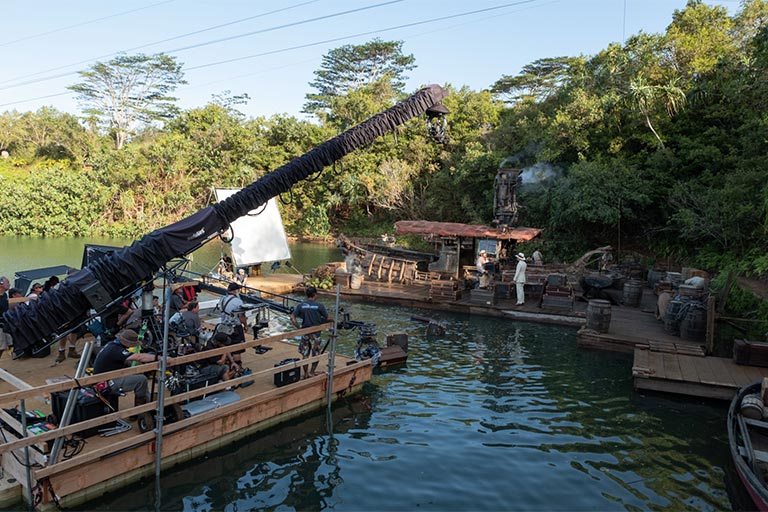 Filming on the set of "Jungle Cruise." / Photo: Disney News

Despite the challenges of the massive production, he found himself impressed with the film's technology. "For Édgar Ramírez’s character, Aguirre, we used an infrared camera system to track markers that were painted on the actor's face with a special paint that aids visual effects with face tracking," he shares. "The markers are invisible to the naked eye, but the camera is able to read the infrared paint. It created a bit of a challenge with the camera rigging, but was really cool to see the final product."

Krochmal, Cornell and Craver crossed paths frequently during the making of "Jungle Cruise."

"It was fantastic working with a fellow Pickle everyday," Cornell says of Craver. "I think UNCSA Production Design alumni really have skills that make them incredibly valuable to an art department or set decoration team."

Krochmal has spent plenty of time on film sets in recent years, including as art director on the upcoming "They Cloned Tyrone" for Netflix and the film adaptation of the hit Broadway musical "Wicked." Working with Cornell helped contribute to the success of the filmmaking process on "Jungle Cruise," he says.

I always enjoy working with alumni on projects, as they are always on top of their game and give 110% effort every single day to make the project the best it can be.

"Amanda was sourcing amazing pieces of period set dressing that played throughout the film. Many of the sourced dressing pieces were used as inspiration for portions of the set as well, which helped add to the overall realism," Krochmal says. "I always enjoy working with alumni on projects, as they are always on top of their game and give 110% effort every single day to make the project the best it can be."

Those efforts also contributed to an overarching sense of appreciation for the film itself. "Visiting completed sets never gets old for me," Craver says. "I’m always in awe at what the film industry can imagine and the massive scale on which it can be built."

That awe was shared by Cornell. "I really enjoyed the challenges of building set dressing on 'Jungle Cruise' — buying parts and pieces that turn into ancient scrolls, sourcing marbled paper and buying leather to create ancient books — it’s a puzzle and a craft project rolled up into one," she says. "The decorator, assistant decorator, leadman and crew on this movie were incredibly talented people. It’s honestly awe-inspiring to see what they accomplished day to day."

In addition to Krochmal, Cornell, Craver and Blankinship, many other alumni helped bring "Jungle Cruise" to life. Among them, are:

How to watch: "Jungle Cruise" was released in theaters and for streaming on Disney+ Premier Access on July 30, 2021.