The moment Amelia Bay stepped foot on the UNCSA campus, she knew it was the school for her. The Iowa native was impressed by the fact that she could concentrate in Wig & Makeup—UNCSA is one of only a handful of schools that offer that option.

Now Bay, who completed her undergraduate degree in 2014, is the Assistant Hair and Makeup Supervisor for “The Book of Mormon” on Broadway. We talked with her about her time at UNCSA, the craft of wig making and how she uses the skills she learned at school to get Broadway stars ready for the show.

I was a cheerleader all through junior high, and that’s what I thought I wanted to do. I broke my arm the day before tryouts for high school, and didn’t get to try out. I saw a flyer for a production of “Charlie and the Chocolate Factory” and signed up to do makeup for that show. As soon as I worked on that show I knew I wanted to do makeup for Broadway. I wrote a paper called “My Big Break”—breaking my arm was the best thing that happened to me because it started me on this path.

Why did you decide to attend UNCSA?

I was looking at a few schools. When I toured UNCSA, I thought, “This is the only school for me.” The facilities were so amazing and it was cool that I didn’t have to major in theater tech, but could specifically get a degree in Wig and Makeup.

Describe your experience at the school:

I went in as a freshman, just wanting to do makeup. The first year we were exposed to everything, from costumes to scenery to lighting. This gives you a well-rounded exposure to a number of things and helps you to make sure you have selected the right major, because you’ll focus on that for the next three years.

I thought I would be more interested in the makeup aspect of this work, but when we took our first wigs class I thought, “This is what I want to do.” I really fell in love with the wigs.

Who taught that first wig class? How did that person inspire you?

Is there a production from your time at UNCSA that really stands out?

During my fourth year, I was the hair and makeup designer for a production of “King Hedley II.” It was such a great production; with it was a small cast and an intimate theater setting. I really had the opportunity to craft each character and got to build three custom wigs for that show for each of the actors. I made things like a full bald cap and a hand-laid beard. It was really cool to use the skills I learned in my classes for production. 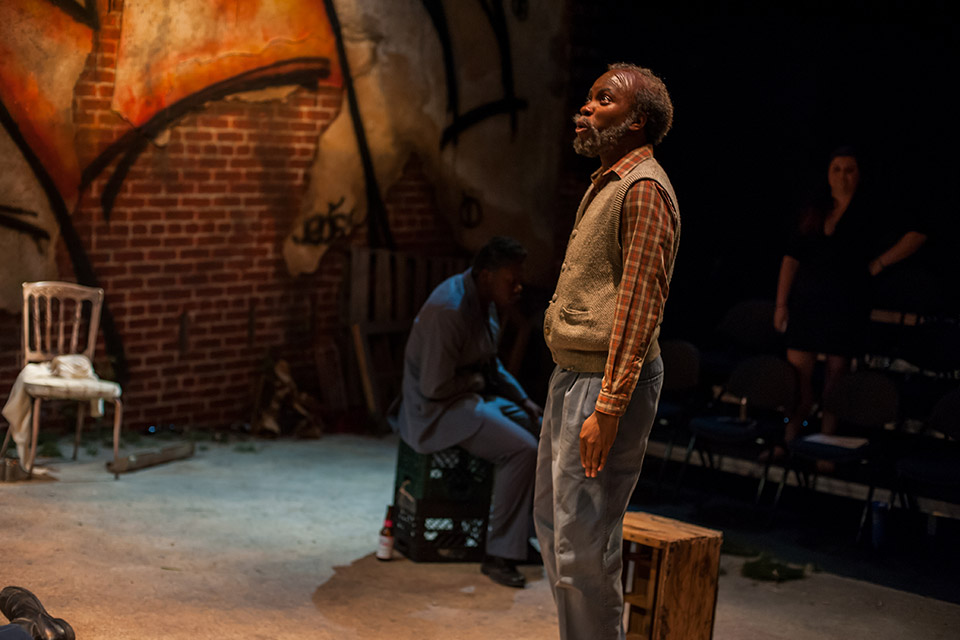 Amelia Bay was the hair and makeup designer for UNCSA's production of "King Hedley" in 2013. / Photo: Steve Davis

What did you do after graduation?

I did a Bard SummerScape in upstate New York and worked on several operas, then toured with “Flashdance the Musical” for seven months, before moving to New York. I’ve worked on “She Loves Me,” “Sunset Boulevard” with Glenn Close, “School of Rock,” “Phantom of the Opera,” “Aladdin,” “Jersey Boys,” “Matilda,” “American Psycho,” “Warpaint,” “Charlie and the Chocolate Factory” and “The Rockettes NY Spectacular.”

Tell us a bit about your recent work with “Book of Mormon.”

For “Book of Mormon,” like most Broadway shows, we don’t build the wigs from scratch—we have a wig builder. We take the measurements for the actors and send them off to be built. But I do know how to build a wig, and have worked on that side as well.

On Broadway, I do haircuts and get the actors’ wigs ready. My day-to-day involves touching up the wigs, putting them on the actors, quick changes backstage and taking care of the wigs and washing and roller setting them. We’re very hands-on with the actors.

Happy 3,000 shows @bookofmormon !!! I love getting to work on this hilarious show everyday with this guy ❤️ Let’s eat cake about it! #thatisacake

Some finger waves I did for a photo shoot this week with the lovely @eloisekropp. Shot by the amazing @susanstriplingphotography and makeup the talented @rachelestabrook such a fun glam shoot ❤️

So very excited to announce that tonight I'm officially opening my first big show as the Wig Supervisor in New York City. I'm so proud of this incredible show and stellar cast and crew! Come see First Daughter's Suite at The Public Theatre, you don't want to miss this one! #FirstDaughterSuite #thepublictheater #wigs

When you tell people that you work with wigs, do you get questions? Are people familiar with the craft of wigs?

People generally know very little about wigs, sometimes even people in the theater community. Just last week one of our actors was asking questions about how the hair is attached to the wig, and was baffled that we often tie every hair in individually. It’s so funny because the actors wear these wigs every day and it sometimes doesn’t cross their mind how they’re made. A lot of people have no idea what goes into each wig.

Do you stay connected to UNCSA alumni?

Absolutely. It’s really nice to have a group that has your back and is willing to recommend you for positions. A lot of my fellow alumni are my closest friends here in New York. For instance, I’m getting ready to work on the “Adult Swim” television show, and Blair Aycock, who graduated from the Wig and Makeup program in 2013, recommended me.

At “Mormon,” we were looking for a swing and I recommended Jill Haley (M.F.A. Wig and Makeup ’15), who became a great swing for us. It’s nice to not only have people recommending you and vouching for your skills, but also to be able to recommend others who received the same training.

I also work alongside my boyfriend, Dave Thomas Brown (B.F.A. Acting ’10). He stars as Elder Price in “Book of Mormon.” It’s so fun to get to work together and to style his hair for the show every day.

What are some of your goals?

My short-term goal is to work on a television show for a season or two. I’ve worked as a swing on “Law and Order SVU,” “Bull” and on “Iron Fist” for Netflix. I really enjoyed my experience on set and am interested in doing that permanently, maybe after “Mormon.”

Television is so different from Broadway. With Broadway, you know exactly what you are getting day to day. With television, it’s a little more unpredictable.

What was the best part of your UNCSA education?

UNCSA gave me such a vast knowledge of wig building. I feel like a lot of schools or intensive programs don’t teach the skills I learned at school. For instance, many people I work with don’t know how to ventilate, which is okay because on Broadway we’re not building the wigs. But, it is really helpful that I know in case a mustache falls apart or a wig starts balding.