Dwayne Burgess builds a diverse career as a concept artist

The Maine native, who currently works as a full-time concept artist in television and film, said that he always has been interested in art and was a big fan of movies and television growing up.

“My grandmother worked at a store across the street, where they rented movies, and she would babysit me all the time. She would let me rent whatever. I probably watched some things I definitely shouldn’t have watched at that age, but I got to see so many different genres,” Burgess said.

“I grew up watching ‘The Wizard of Oz’ almost every day, and I remember watching a show called ‘Movie Magic,’” said Burgess. “They went behind the scenes on how they did all kinds of special effects, model inking and stuff like that. I remember being so engrossed by it. It was such a faraway thing, especially growing up in Maine, that I think I just never let myself believe that it could be a career.”

During his first year at the Maine College of Art in Portland, Burgess realized he wasn’t into the Graphic Design program he was majoring in and decided to look into schools that offered programs in set design.

“[Set design] had always been in the back of my mind, but I just never knew how to pursue that,” he said. “I started looking at colleges that had options for set design majors, and came up with a couple of options, but UNCSA always stuck out in my mind.”

Burgess came down for an interview and “fell in love with the campus, the layout and the whole structure of the school,” transferring his sophomore year.

“It was a pretty quick decision. I’m the kind of person that likes to do a lot of research on the front end, so by the time I went down to visit and interview, my mind was pretty much made up. I think I was only considering one other school, but I didn’t even go visit the campus because once I went to UNCSA, it felt right to me,” he explained.

Burgess said that once he got to know the school better, he appreciated the work ethic that was instilled in the students.

“I tell people how many productions we would do in a year or how much time we would spend in the shop working and crewing the shows in the evening after a full day of academic and studio classes… it blows their mind,” he said. “I meet a lot of people now who are trying to go into the same field, and they have to learn all of that stuff on set, so it takes them years and years to learn the stuff that we knew coming out of school.”

I meet a lot of people now who are trying to go into the same field, and they have to learn all of that stuff on set, so it takes them years and years to learn the stuff that we knew coming out of school.

Burgess has become fast friends with many other UNCSA alumni, including his husband, Jeremy Grant, a graduate of the School of Filmmaking.

“I think all five of the different schools were very much in their own bubble. There are so many people that I’m like ‘gosh, I wish I knew you back in college’ because we’re such good friends now, but our paths never crossed.”

A concept artist in L.A.

After graduation, Burgess found his way to Los Angeles for a portfolio review at UCLA. While there, he decided that the city melded more with his personality and he made it his home.

“I think the end goal for a lot of people, especially as a set design major in design and production, is to go to New York or to pursue the Broadway thing. I love Broadway, and I love New York, but I never really could figure out how my life could fit into moving to New York. I’m glad I made the decision to come out here.”

Burgess has made all types of “magic” in L.A. since graduating. He spent his early years designing for theater, drawing on-air project sketches for HGTV and illustrating sets for promotional shoots. In 2012, he began working at NBC Universal, where he quickly climbed the ranks to become Supervising Art Director. However, in the leadership role, Burgess found himself wrapped up in meetings and paperwork rather than the creating he had hoped to be doing.

In 2018, he began pursuing work as a full-time concept artist. Most notably, he worked on shows like “Mad Men,” “America’s Got Talent: The Champions,” season 12 of “American Ninja Warrior” and as Senior Illustrator on season four of FX’s “Fargo.” 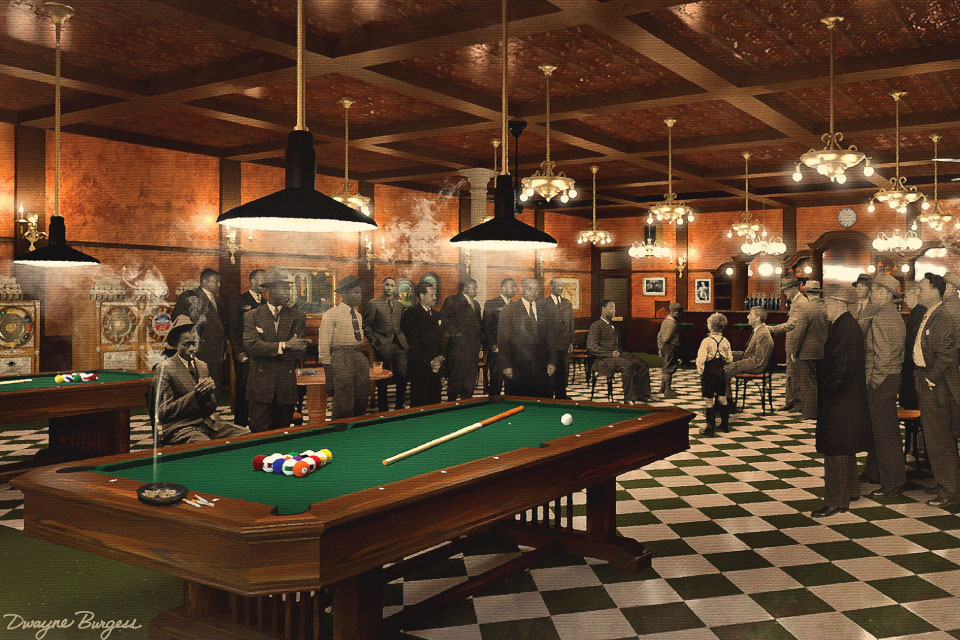 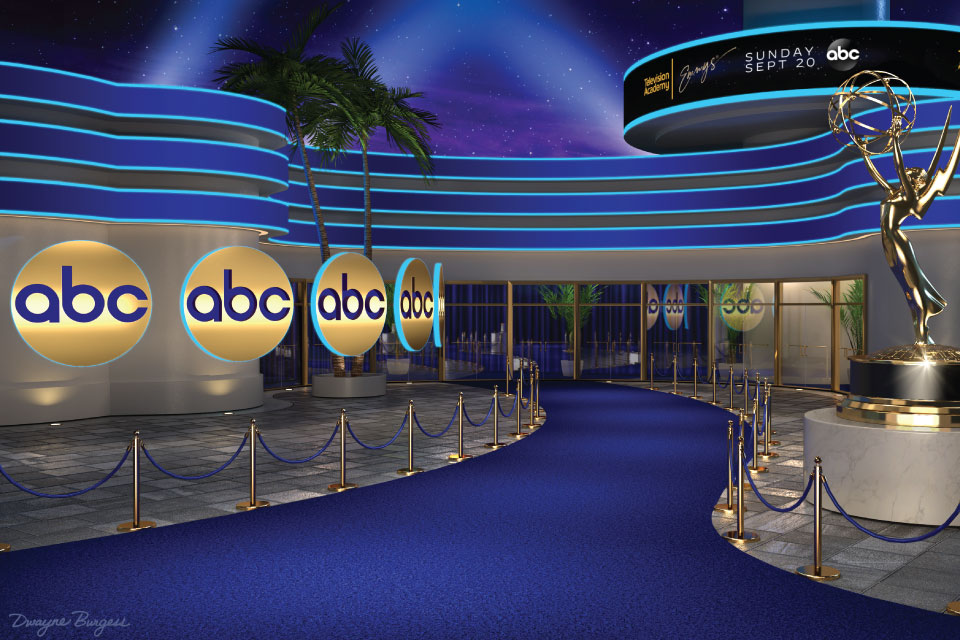 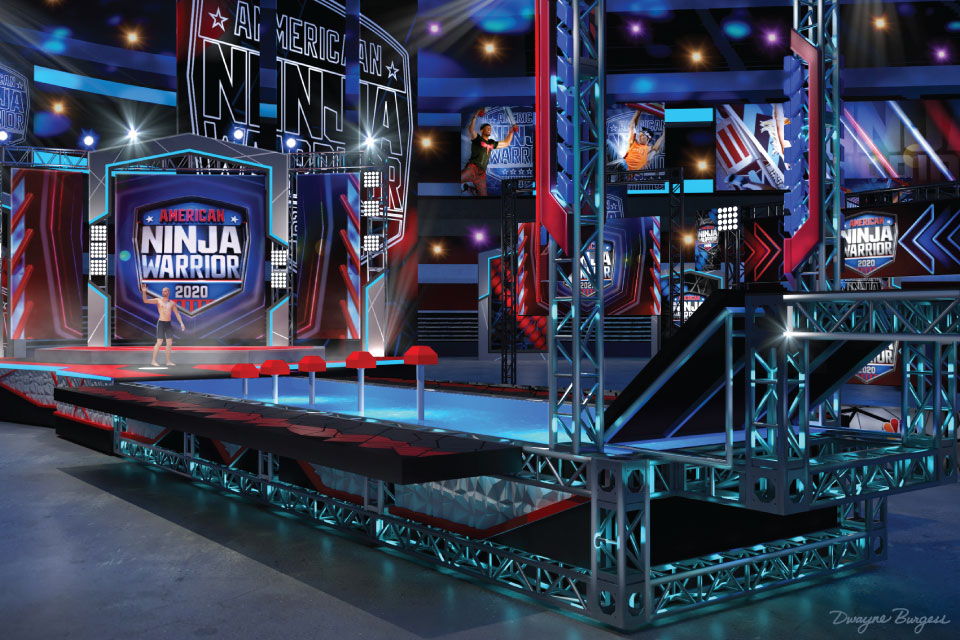 “For the first year, it was great. I worked on a few big shows as a concept artist which was really exciting,” he said. The second year, however, was impacted by the Coronavirus pandemic, which shut down the television and film industry until recently. Burgess has spent most of that time at his home in Joshua Tree honing his skills and working on a few personal concept art projects.

“In mid-March, everything shut down in the industry. In the fall, all the unions passed a back to work agreement. It took six months for everyone to get on the same page about safety protocols. It seems as if things are slowly starting to ramp back up, which is good.”

Burgess said that when reflecting upon his career trajectory, he would remind students to be open to taking any kind of job that will allow them to learn and grow in their area of expertise.

“You’re not getting into a marriage; you’re just getting a job. When you are just starting out, it is great just to take some of the first things that come to you. If you knock it out of the park, you will make great connections and you never know where those will lead in the future. If it is a miserable job, there’s nothing that says you have to stick with it forever.”