From the Olympics to U2 concerts, an electronics engineer finds global success 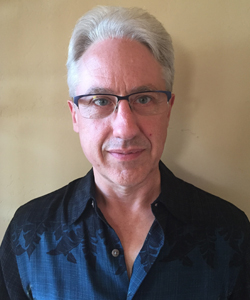 In every great performance, there are the performers and there are those who, as Milton Davis ('83) puts it, free the artists and help them carry out their creative vision. He speaks from the perspective of a theatre industry veteran with more than 30 years of experience.

Davis’ degree in lighting from the School of Design and Production has garnered him a successful career and allowed him to move from the technical side of performance to where he is now, an electronics engineer of entertainment lighting at Doug Fleenor Design in Arroyo Grande, California.

Throughout his career, Davis has helped make possible all kinds of high-profile events for all kinds of high-profile artists and occasions. He designed the lighting system for the opening and closing ceremonies of the 2000 Sydney Olympics. He provided much of the lighting system design for the Universal Studios Islands of Adventure, helped revamp San Francisco’s War Memorial Opera House, and brought to life every Cirque du Soleil show on the Vegas strip since the mid 1990s.

In more recent years, his engineering work at Doug Fleenor has appeared on the stage of U2, the Blue Man Group, Elton John and Billy Joel, the Glee Tour and just about every Country Western artist you can think of.

According to Davis, people turn to Doug Fleenor Design for what he calls “unusual solutions.” Fleenor and his team combine vast engineering knowledge with the understanding of the effect an artist wants to have on the audience.

“I don’t do the same thing two days in a row – ever,” he says. “There is always something unusual coming down the pike. My favorite phone call is the one in which someone says, ‘Milton, I have this completely whacked out idea, so I thought of you right away.”

Davis’ tremendous experience in lighting control networks and distribution has made him a popular speaker at trade shows and a valuable contributor to industry trade journals. It also is why Davis is known as an “engineer extraordinaire.”

If you don’t have an engineering mindset, it can be difficult to understand what he does and how he does it. What’s more important, however, is why -- what excites him about the industry and how he got to where he is today.

Surprisingly, much of his engineering ability is self-taught. From the age of 7, he soldered objects together and understood how to fix things. When he chose UNCSA over an engineering degree at N.C. State University, he discovered how the arts could give purpose to his technical ability.

My education at UNCSA helped me become an interpreter between technology and artist. I learned how to apply my technical ability to help free artists to carry out their creative vision.

Together, he believes, the two have the ability to make magic.

A high point of Davis’ educational experience? Working on two shows that celebrated the opening of the Stevens Center. He served as lead sound designer for one and master electrician for the other.

“The whole experience of opening that facility was an astounding, amazing thing. Name a celebrity, they were there. I fitted a body microphone onto Gregory Peck. I had drinks with Leonard Bernstein.”

Theatre consultant Nan Porcher was his lightning designer. “Working with an honest-to-God Broadway lighting designer as a student was incredible. She asked my advice and we had a good working relationship. She treated me like another professional. She trusted me -- a student -- to work with her, and that was really refreshing.”

Davis experienced the same level of trust from the faculty at UNCSA. He credits much of his success to Assistant Dean Scott Templin, whom he recently saw at a reunion for the first time in more than 30 years.

“That man is astounding. Scott was a terrific mentor who took me under his wing and guided me. He demonstrated a continued belief in me, a faith and trust that allowed me to do a lot with my education.” Templin entrusted Davis to teach part of his Sound and Electronics class. He even allowed him to help develop the curriculum for a Recording Studio Technique course.

“He was a father figure, and I wanted to make him proud. He displayed a professional respect to me all the time.”

There were others as well. The late English professor Bill King was “a wonderful human being.” John Snow, who taught contour drawing, modeled compassion for Davis. “I was in that class with very talented scenic designers. Snow was supportive despite my shortcomings as a visual artist. That encouragement is something that I try to maintain even today as I support my own team and my crew.”

It was within UNCSA’s supportive, arts-focused learning environment that Davis received all of the training he needed. “As I left college, I immediately had about 10 different job offers.” The best one came from a former classmate, who wanted to Davis to join her at the Dallas Theatre Center. As master electrician, he spent more time on stage than he does now. Often, the work would be grueling.

“At one point, I was 40 feet up in the air on top of a ladder, with pneumonia, and hadn’t slept in 36 hours. On top of that, I had a crew of 50 people working for me, no roof on the building and no Certificate of Occupancy – and we were supposed to have a Paul Simon concert in 12 hours. We pulled it off, and that part of my career was great, but that was the moment when reality set in that I couldn’t do this for the rest of my life.”

Davis made his move toward manufacturing – the research and design side of the business that he loves even more.

“I’ve always known that the School of the Arts was the right place for me, but it wasn’t until a few years ago that I realized fully the role I was fulfilling and unknowingly refining there, and that is this connection between the technical side and the arts. I enjoy using my knowledge to free the artist to live out who he or she wants to be creatively.”