When one door closes, another opens for alumna Alex Hairston

Alumna Alex Hairston has been busy on Broadway, performing across the country and teaching since graduating from the high school drama program in 2009. After attending Western Carolina University for musical theatre and dance, Hairston spent time performing with Norwegian Cruise Lines and in regional theatre productions. In 2019, she made her Broadway debut in the hit jukebox musical "Beautiful: The Carole King Musical" as Janelle Woods.

Most recently, Hairston was on the first national tour of "Summer: The Donna Summer Musical" as Disco Donna, the character that represents the disco era of music legend Donna Summer. After the tour was cut short due to the COVID-19 pandemic, Hairston transitioned to directing, virtual teaching and creating art for racial justice. 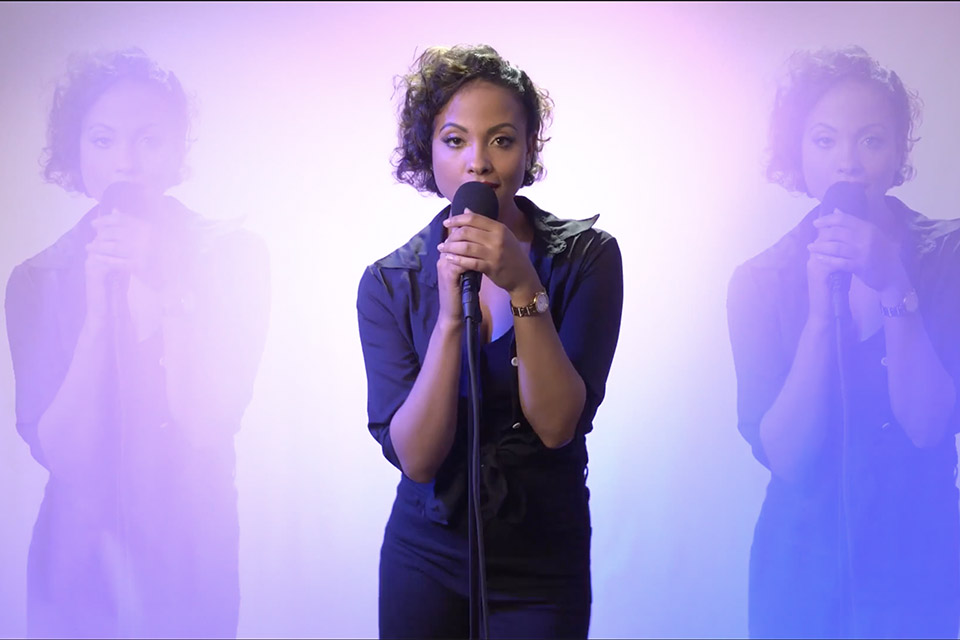 We caught up with Hairston to learn more about her time at UNCSA and her journey since graduating.

COVID-19 has permanently changed your industry. How have you been staying creative over the last several months?

My sister and I learned to sew growing up, so together we've made about 1,500 face masks throughout the summer. I also started teaching virtually for a dance studio, giving virtual masterclasses, and I had the honor of teaching Musical Theatre Dance during the UNCSA Drama Summer Intensive. I like to believe that when one door closes, another opens, and that's exactly what happened when quarantine hit. It was tough dealing with the Summer tour closing early, but it presented an opportunity to teach that I didn't have before. I was surprised by how much I really enjoy it and I've become really passionate about sharing what I've learned with young performers.

I also recently finished a project called "The Dream Unrealized: The James Baldwin Project," which is a virtual performance that was recorded and soon to be livestreamed on Broadway On Demand. It's a collection of monologues, and each monologue is a section from James Baldwin's 1965 debate and call for racial reform in America; "The American dream at the expense of the American Negro."

Being a part of this project was a great creative outlet, as well as a way for me to work through my feelings and dealings with the racial injustice in America, and a way to contribute to young black artists and the Black Lives Matter movement. Art is designed to make us feel, and therefore inspires change. Although it is difficult to be an artist during these times, I've also never been more honored.

Tell us about any current and/or upcoming projects you’re working on:

With Broadway, and the industry in general, on pause I recently relocated to the Chicago area to work at a Performing Arts Academy. I just finished directing a socially-distant, fully-masked production of "Rent" with a group of high schoolers. It was a strange, challenging, amazing experience. I don't have much experience directing yet, but I've always felt a little knack for it, mostly thanks to my acting training.

Theatre in a time of coronavirus is interesting on all fronts. The biggest challenge was figuring out how to create intimate, personal moments between characters without having physical contact. As challenging as that was at times, it was equally as rewarding. Seeing the kids adapt so easily to such an unknown, and sometimes uncomfortable, situation was inspiring. One of them said "If we can dance and sing all of 'La Vie Boheme' in a mask, then people can wear them to go to the store." We underestimate the brilliance of kids sometimes.

Why did you choose UNCSA for high school?

I originally wanted to go to the School of the Arts for Dance. I was a late-comer to the world of dance, however, and had only been training for about three years when I first auditioned. I was always a go-getter, evidently. Not surprisingly, I was nowhere near ready for the Dance program, but in the whole process my mom recommended I look into the Drama program... something I was more familiar with. I didn't realize until after I was knee-deep into my first semester as a drama student, how special it was to have been chosen for the program. It was one of those moments when one door closes and another one opens; and it was the perfect door.

I didn’t realize until after I was knee-deep into my first semester as a drama student, how special it was to have been chosen for the program. It was one of those moments when one door closes and another one opens; and it was the perfect door.

Studio 634 is the home base for the drama kids. It's our happy place, our frustrating place, our safe place, our difficult place and the spot on campus I could never forget. I was homeschooled from 6-11th grade, so 634 IS high school to me.

One of my favorite memories was our circus class performing at Brenner Children's Hospital. We all only knew about five tricks or skills each, but the kids still thought we were the coolest. It felt good to make them feel better, even if just for a few moments.

What advice can you share with current or prospective students:

Be a vulnerable sponge. I experienced so many new things in the program; yoga, circus, improv, acting and voice techniques. The eclectic structure of the program is one of the things that makes it so special. It's a place that provides you the platform and tools to find who you are and want to be, instead of forcing you into a mold of what someone else thinks you should be. Take advantage of that freedom. Prospective students, show your willingness to learn and take risks. Current students, open yourself up to new things and soak up all the different bits you can. It'll make you a better performer and better human.

My top career moments so far would definitely include making my Broadway debut, booking "Summer" and playing Disco Donna and meeting Jenifer Lewis. My dream for so long was to be on Broadway. Then it happened, and people started asking, "What’s your dream role?" My dream then was pretty much just to play a lead. Then I saw "Summer," and immediately knew that was the one. It was a life-changing experience to be a part of a show with not only an incredibly talented, mostly female and mostly black, cast, but then to also work with a Tony Award-winning creative team on a show about the fierce, trailblazing, talented powerhouse that was Donna Summer. It was a dream come true.

The tour performed for three weeks at the Pantages Theatre in Los Angeles - another "wow, I can't believe this is happening" moment. One night after the show a friend introduced me to Jenifer Lewis, the Mother of Black Hollywood. We chatted for a few minutes (well, she talked, and I fangirled) and she told me she loved my work and saw something special in me. I don't know if she was just being polite or not, but it is and will always be a highlight of my career.

How do you apply what you learned at UNCSA in your career?

For years I've been a triple threat, but I never really thought of myself as an actor first. The longer I'm in the business, however, I find that it's my acting training that sets me apart and gets me further in the business. UNCSA was the first time I studied specific acting techniques. It made so much sense that I assumed it was something that everyone who was trying to be an actor was learning. I found out quickly that wasn't true. I'm so grateful to have a strong acting foundation and feel comfortable taking risks in my craft. I built that foundation at the School of the Arts.

For years I’ve been a triple threat, but I never really thought of myself as an actor first. The longer I’m in the business, however, I find that it’s my acting training that sets me apart and gets me further in the business. UNCSA was the first time I studied specific acting techniques.

I caught the travel bug very quick after my first cruise contract, and I can't wait to travel again. Specifically, I really want to go on safari in Africa and I want to see whales, up close and personal in their natural habitat. I also want to eat as much delicious food around the world as possible.