UNCSA Associate Professor Christal Schanes reached the pinnacle of her profession in 2012 when she brought home an Emmy for her work on “Saturday Night Live.”

A 2003 graduate of the School of Design and Production at the University of North Carolina School of the Arts, Schanes leveraged her MFA in wig and makeup design into a thrilling, seven-year run building wigs and styling hair for the stars of NBC’s award-winning variety show.

These days it is the work she does on the side — creating wigs free of charge for medical patients experiencing hair loss — that inspires her the most. And last fall, Schanes landed another big award that helped the artist leverage her passion for serving others into CHRISTALine Studios LLC.

“Working on ‘Saturday Night Live’ was extremely exciting, but the more profound work that I do is with the medical clients,” says Schanes, who now teaches an elective medical wig class at UNCSA in addition to her regular classes. “It resonates with me on such an emotional level. Just seeing the smile on their face when the wig goes on — they tell me how much it means to have their hair back and their dignity back. They look in the mirror and they look like themselves again.” 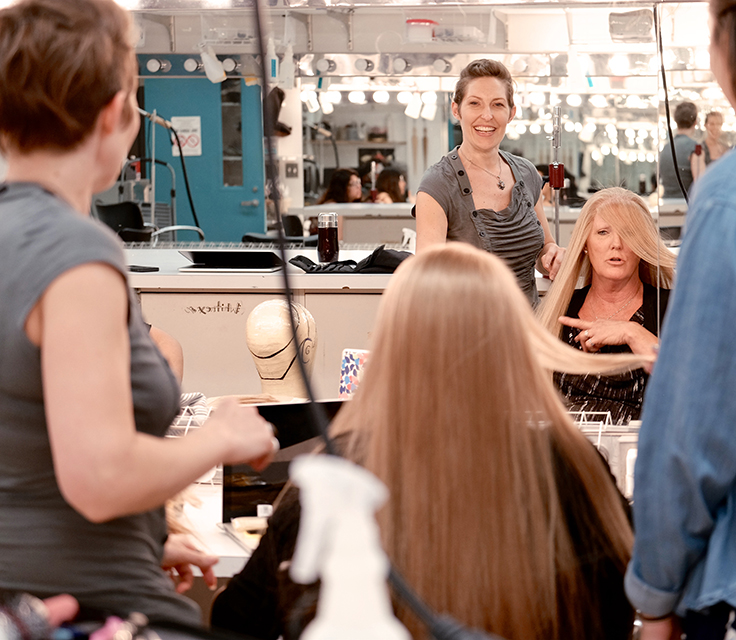 Christal Schances, UNCSA alumna and professor, fits a client with a medical wig. Her Artpreneur Grant has helped her launch her medical wig service.

Schanes and Tonya Sheffield, a 2008 graduate of the University with a BFA in filmmaking, are recipients of the inaugural Chancellor’s Creative Startup Artpreneur Grants at UNCSA. Over the past eight months, the two artists have received business consultation, networking services and funding totaling $25,000. Made possible in part by the Thomas S. Kenan Institute for the Arts in partnership with the Chancellor’s Artpreneur Initiative, the grant is available to UNCSA-affiliated individuals who complete the Creative Startups Accelerator in Winston-Salem and agree to locate their enterprises in Winston-Salem for at least a year.

Sheffield, founder and executive director for The Dream School, has used the grant money to purchase 15 new Dell laptop computers and four iPads for the nonprofit’s after-school and summer programs that use podcasting, digital video and coding to help low-performing students improve their skills in language arts. A group of students who completed an eight-week podcast workshop on Saturday mornings in Yadkinville premiered their work April 7 at the Yadkin Cultural Arts Center. 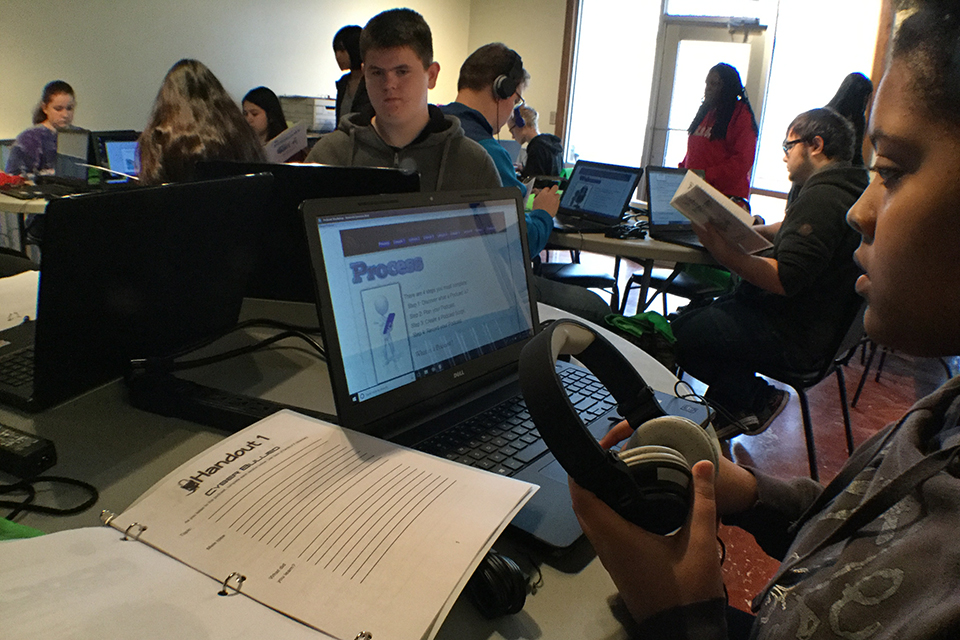 Schanes used the money to register CHRISTALine Studios, to create strategic partnerships and to enhance the brand identity of MEDwig, a philanthropic brand within the social enterprise. Her goal is to one day open a brick-and-mortar shop locally, where UNCSA students can pursue a career in medical wig building and, perhaps eventually, even prosthetics.

The Artpreneur grants support a strategic initiative of UNCSA and the Kenan Institute to catalyze arts-based community and economic development.

“The Kenan Institute and the University are working collaboratively to incubate creativity and power creative industry,” says Corey Madden, Executive Director of the Institute.

Artists are innovative, brave and visionary. They have grit. They are using their creative and leadership skills as artists to define how to help people in a way that is practical, life-affirming and filled with all the values that the arts represent. We want to make sure that we power the creative potential ... to make a difference in society.

“Artists are innovative, brave and visionary. They have grit. They are using their creative and leadership skills as artists to define how to help people in a way that is practical, life-affirming and filled with all the values that the arts represent. We want to make sure that we power the creative potential of our students to make a difference in society as a whole.”

“These are values-driven, creative solutions to very significant community challenges,” she says. “I was so taken by their passion to use their artistry to make a difference in the community — Tonya with students who are struggling in school and Christal with people who have medical challenges.”

UNCSA Chancellor Lindsay Bierman announced the inaugural winners of the Artpreneur grants during the second annual Creative Startups Winston-Salem, an eight-week business-development program hosted by the Center for Creative Economy in collaboration with the Kenan Institute, a primary partner. Customized for creatives, the Accelerator ended in a five-day “Deep Dive” the week of Sept. 24, 2017, at Wake Forest Innovation Quarter where entrepreneurs worked one-on-one with mentors and creative leaders to develop business plans for their start-up companies.

Schanes and Sheffield were among 10 creative entrepreneurs and companies who participated in the Accelerator, competing for a share of $50,000 in seed funding. Sheffield placed third in the competition, netting an additional $10,000 for The Dream School. 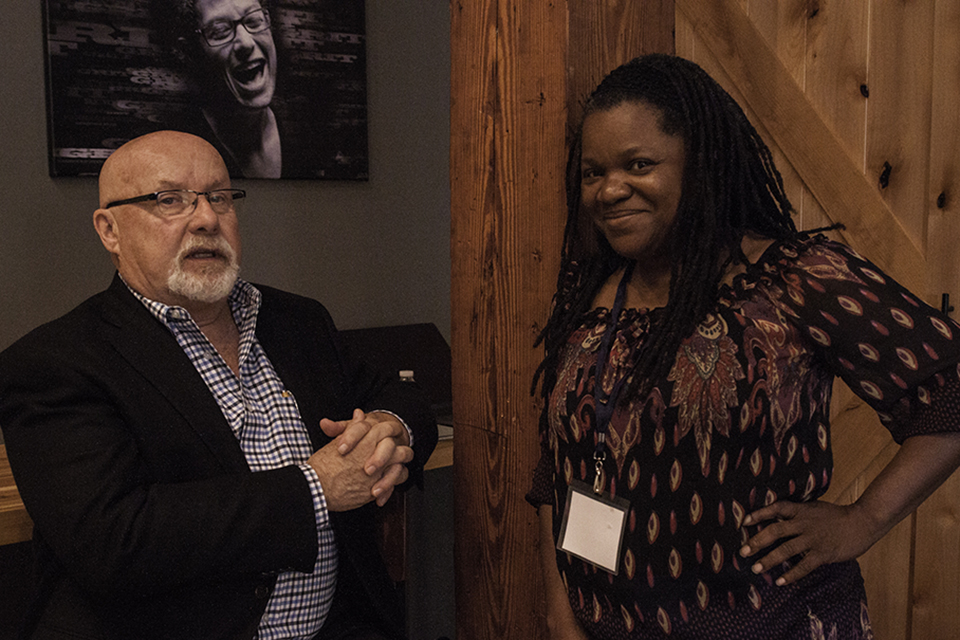 Tonya Sheffield with a Creative Startups mentor during the Winston-Salem Deep Dive in September 2017.

Sheffield’s success was particularly sweet given that she applied twice before securing a spot on the Creative Startups cohort.

“We didn’t get in last year, but it was the spark that got me to understand what we needed to do to focus our business model,” says Sheffield, a U.S. Army veteran originally from Goldsboro. “The application process alone made me realize that I had a lot of work to do. So, in 2016, that’s what I did.”

Shayla Herndon-Edmunds, founder of Oh My Goodness Herbal Bar based in Winston-Salem, won the top award of $25,000 for business improvements and operations. Her online boutique specializes in natural and holistic products and services aimed at enhancing health and well-being.

Second place, and $15,000, went to Jenni Earle, a company founded by Jenni Earle Hopkins that designs hand-dyed bandanas inspired by tradition, Southern culture and courage. Actually, much of the inspiration comes from her grandfather Earle, a coal miner in West Virginia who always encouraged Hopkins to live her dreams.

“He is the voice in my head when I think I am too tired or I can’t do this. He is saying, ‘Of course you can — get up and get to work,’ ” says Hopkins, who sold her first bandanas at a small crafts show in Winston-Salem and recently made a deal to sell to highly regarded, handmade marketplaces in New York and Chicago.

“He always had a bandana in his pocket. When I was growing up, I would hold it, smell it and put it in my back pocket. When I touched it, it felt like magic, like I could do anything.”

Like textile mills in North Carolina at the turn of the century, Madden says, creative businesses have powered places like Winston-Salem for many years, but remain severely underfunded.

By creative, we mean architecture, culinary, fashion, media as well as the fine arts. If we get behind this new wave of creative industry and stay behind it, we could see something happen in 10 years in Winston-Salem that we cannot even imagine today.

“By creative, we mean architecture, culinary, fashion, media as well as the fine arts. If we get behind this new wave of creative industry and stay behind it, we could see something happen in 10 years in Winston-Salem that we cannot even imagine today,” she says.

“We aim to do nothing short of that. What we need is more people to come to the table and get behind it with us.”

Opportunities like Creative Startups Winston-Salem — the exclusive site in the Southeast for the global accelerator program — already are making a difference in the city’s entrepreneurial ecosystem. The 2016 cohort has generated nearly $500,000 in revenue and more than $250,000 in investment, according to Margaret Collins, the Executive Director of the Center for Creative Economy.

“That is in one year, so we are just beginning,” Collins says. “They have taken the knowledge gained during the accelerator program and really put it to work, and they are seeing results. There is no accelerator of this level in the country that services creatives like this, and they are hungry for it. We look forward to year three and growing even bigger.”

Schanes and Sheffield say they are proud — and grateful — that their alma mater is playing a key role in empowering local creatives.

It’s wonderful to see a university as cutting edge as UNCSA be able to venture into entrepreneurial ideas and relationships, and create pathways for their students.

“It’s wonderful to see a university as cutting edge as UNCSA be able to venture into entrepreneurial ideas and relationships, and create pathways for their students,” says Schanes, who now takes graduating students to New York City to connect with alumni and other professionals in the wig and makeup industry. Not surprisingly, those trips include tours of SNL’s wig and prosthetics shops.

“I am extremely proud to call myself a professor at UNCSA. It’s the only institution where I would have wanted to teach.”