By any measure, Krisha Marcano has enjoyed a successful career as an artist. First a modern concert dancer in New York City, she performed with the Martha Graham Dance Company and The Alvin Ailey American Dance Theater. Then she transitioned to Broadway and found steady work in musical theatre, including scoring the role of Squeak in the original cast of “The Color Purple.” While touring with the cast of “Fosse,” she even earned an MBA in entrepreneurship.

These days Marcano teaches theatre dance at the University of North Carolina School of the Arts and runs her own small business, The Artistry Center Network. She coaches performers on how to overcome the “Starving Artist” mentality.

It proved to be a popular topic at the inaugural Artivate summit Aug. 12-13 at Milton Rhodes Center for the Arts in Winston-Salem, where Marcano addressed a group of fellow creatives on the art of the “pivot.” A quick glance at her resume proves that she’s got the pivot down pat. 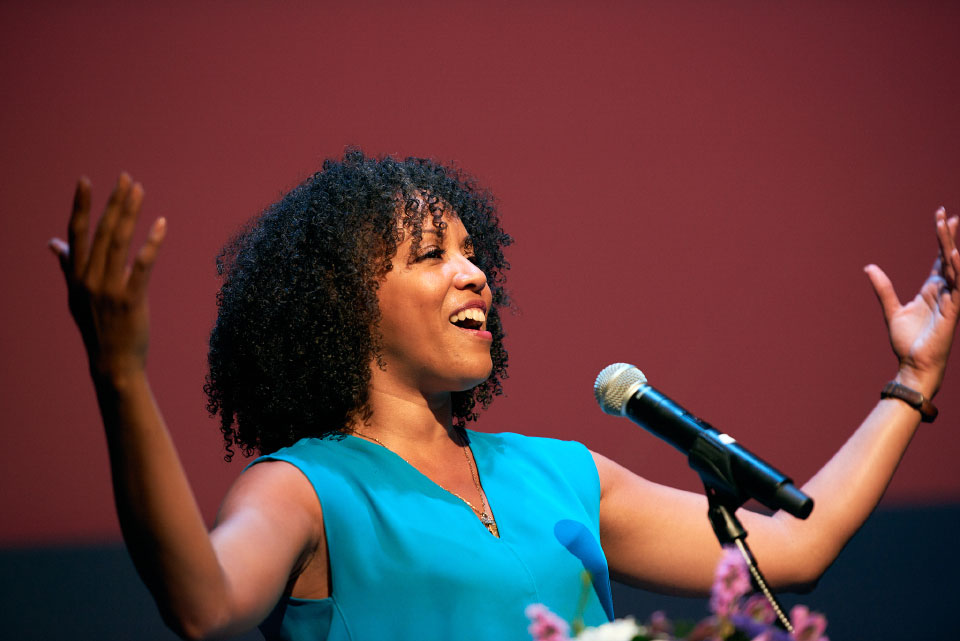 UNCSA Assistant Dean of Student Affairs and Entrepreneurship and professor of Musical Theatre Dance Krisha Marcano talks about the art of the "pivot" at the Artivate summit. / Photography by Wayne Reich

“As a dancer, there is a point where you have to ask yourself, ‘How do I continue to be an artist and a contributor?’ When I was coming up, if you pivoted at all, especially early on, you were considered a failure. It’s so not true,” she says.

“We have to give our young artists permission to have that kind of conversation to open up the possibilities of what success can look like over the course of their careers. It’s a marathon.”

Presented by the Thomas S. Kenan Institute for the Arts at UNCSA, the conference drew about 150 creatives to the City of Arts & Innovation to learn first-hand how artist leaders not only are thriving in new and innovative ways but also contributing to the economic and social well-being of the diverse communities in which they live.

Artists like Iris Cole, a classically trained flute player and founder of Do Good Artist, which specializes in facilitating social change through multi-sector collaborations. Cole spoke about her most recent project, “Unseen,” an innovative virtual reality experience designed to raise awareness of human trafficking. The project evolved through a collaboration of partners from the tech, nonprofit, government, academic and arts sectors.

Or Christina Soriano, the director of Wake Forest University’s dance program and the creative force behind IMPROVment®, an integrative method of dance that can improve brain health in older adults with neurodegenerative diseases. A 2019-2020 Kennedy Center Citizen Artist Fellow, Soriano’s work with Parkinson’s Disease patients is transforming research and practice in medicine.

These and other presenters at Artivate are prime examples of creatives who are leveraging their unique skills and training as artists to build sustainable careers that can make a difference in their communities.

We want to give artists and creatives a more diverse and broader and inclusive image of what they contribute — their creative ideas, their values and their deep commitment.

“We are trying to center artists in community as people who can make an impact in lots of ways,” says Corey Madden, Executive Director of the Kenan Institute. “We want to give artists and creatives a more diverse and broader and inclusive image of what they contribute — their creative ideas, their values and their deep commitment.”

An annual destination summit, Artivate is one cornerstone of the Kenan Institute’s ambitious Creative Catalyst Initiative, a five-year strategic plan that aims to organize and engage the creative community in the Southeast and equip its next generation of artists for careers of all kinds. Opportunities for paid fellowships that provide support and practical experience for emerging artist leaders based in the Southeast is another integral component of the initiative, as is a groundbreaking online certificate program that delves into leadership — of self, of others and of change.

Latesha Smith, a native North Carolinian and lover of art who studied history at Williams College, is among the first cohort of Creative Catalyst Fellows. As a Fellow, she is working as Community Engagement Coordinator with Spoleto Festival USA, one of the premier performing arts festivals in the country, and recently began the new online certificate program created by the Kenan Institute and UNCSA. 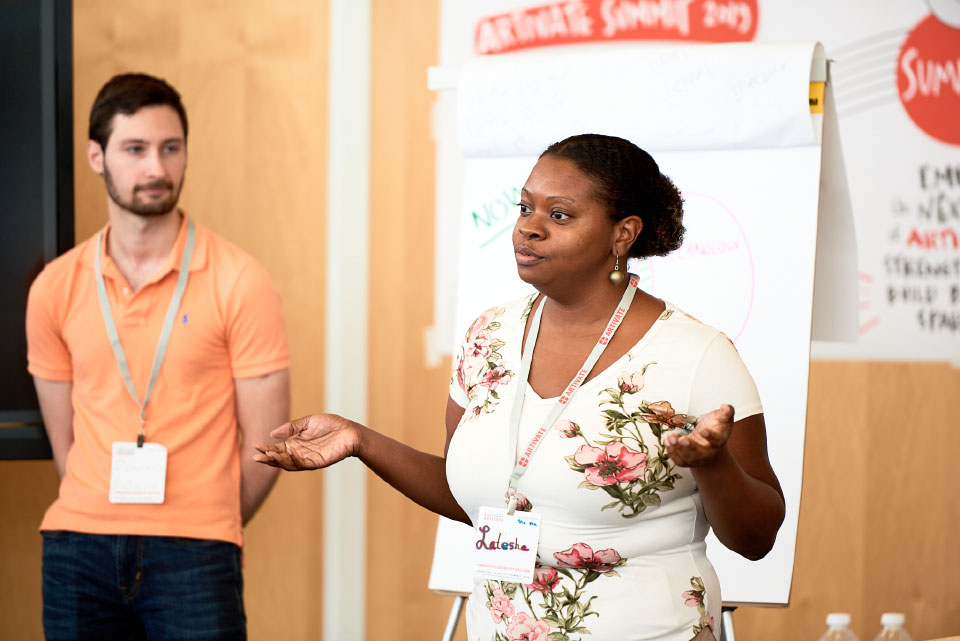 Latesha Smith, Community Engagement Coordinator with Spoleto Festival USA, is among the first cohort of Creative Catalyst Fellows—whom she met for the first time at Artivate.

Smith met the other Fellows for the first time at Artivate — and she said that’s when the dots began to connect for her.

“I think the highlight for me was the downtown walking tour, because we saw all these unconventional partnerships and everything started to make sense,” she said. “I was feeling like I’m not an artist — I don’t paint, I don't sing or dance. Why was I selected? Then it was like, ‘Aha!’ ” The excursion included visits to Bookmarks, a literary nonprofit, independent bookstore and gathering space; a/perture cinema, an art house theater with innovative programming; and Canteen Market + Bistro, a gourmet market, bar and restaurant inspired by creative entrepreneurs.

“I was able to see first-hand that art doesn’t have to be static. It can transform in various ways and in different types of spaces,” Smith says. “I began to feel the job of an arts administrator is to make sure that artists have a place and space to do their work.” 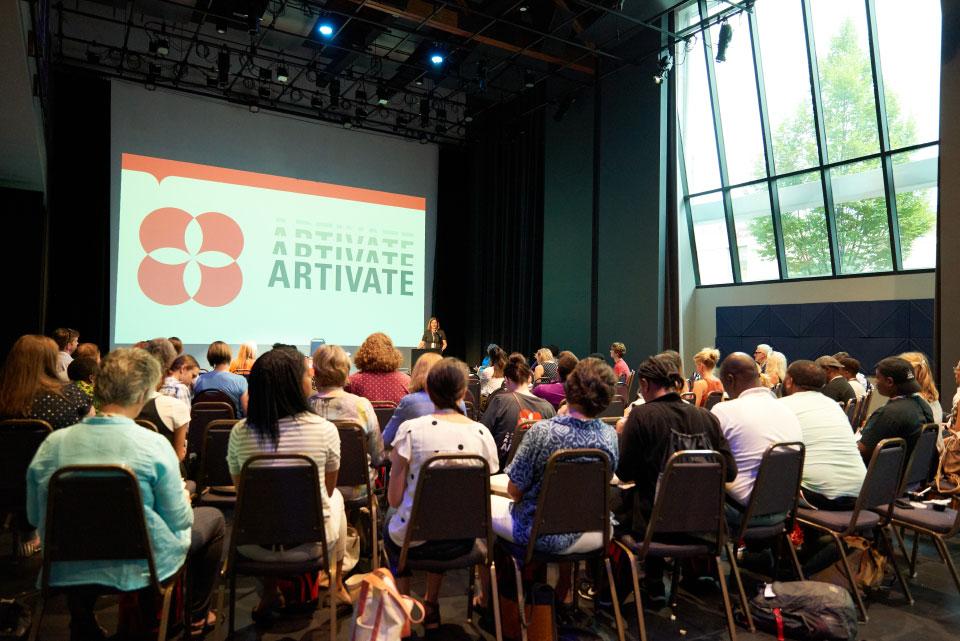 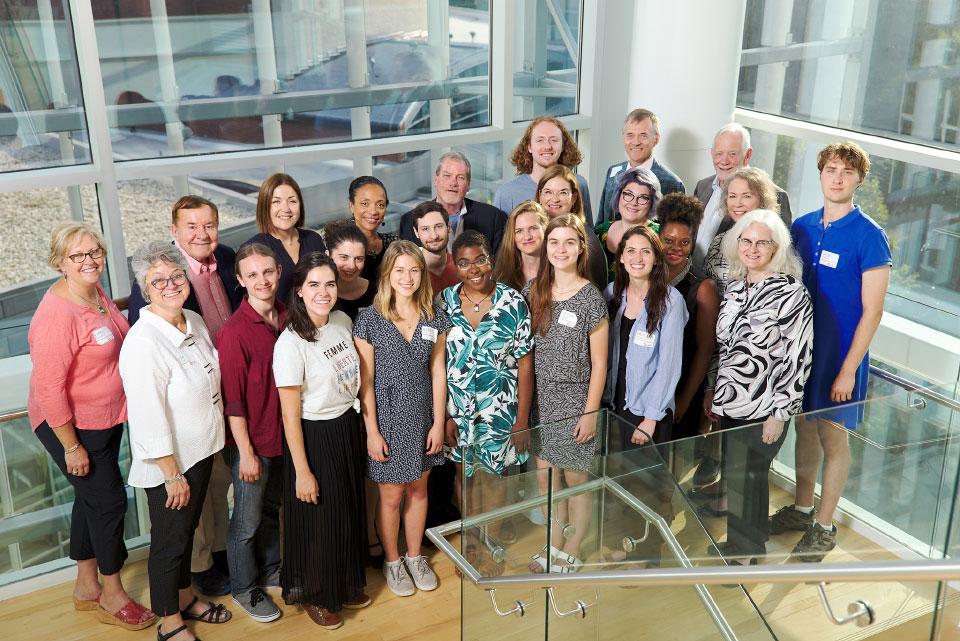 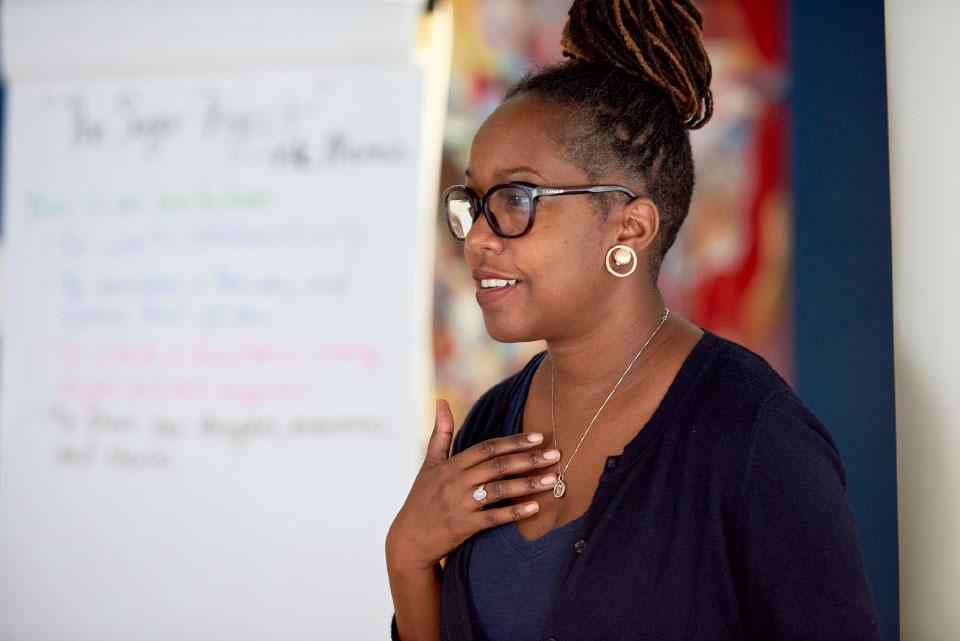 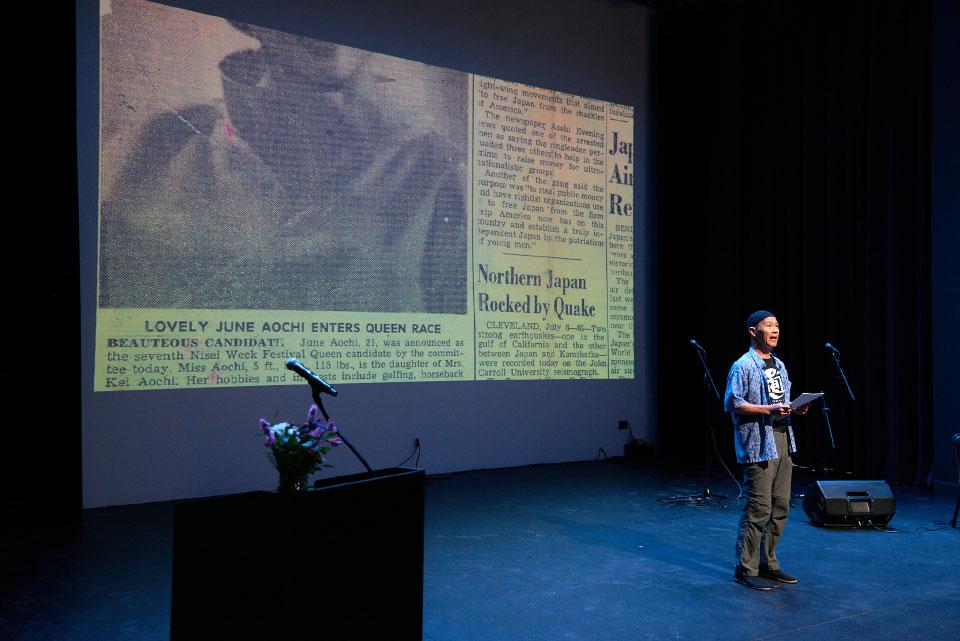 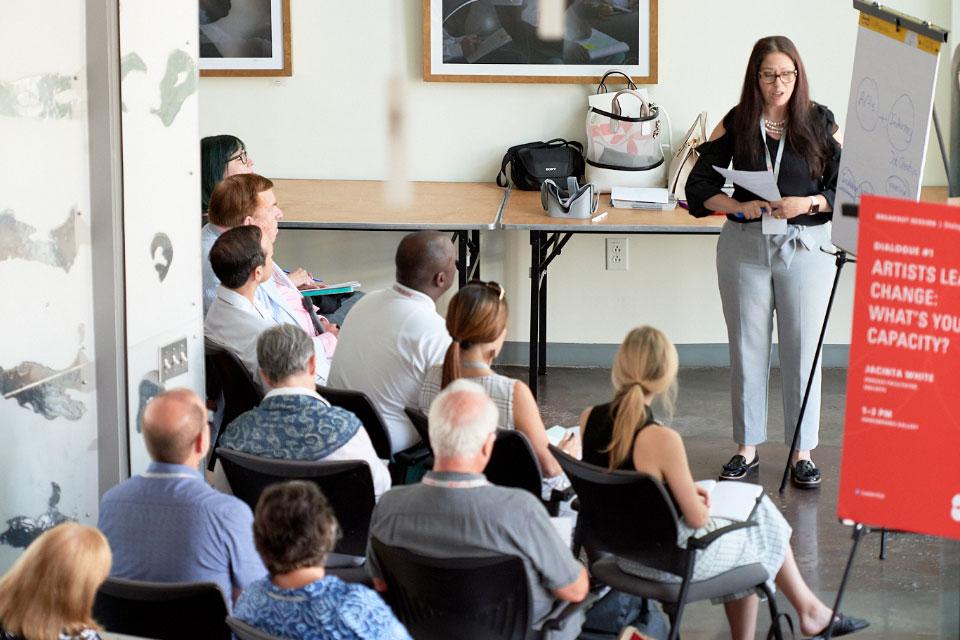 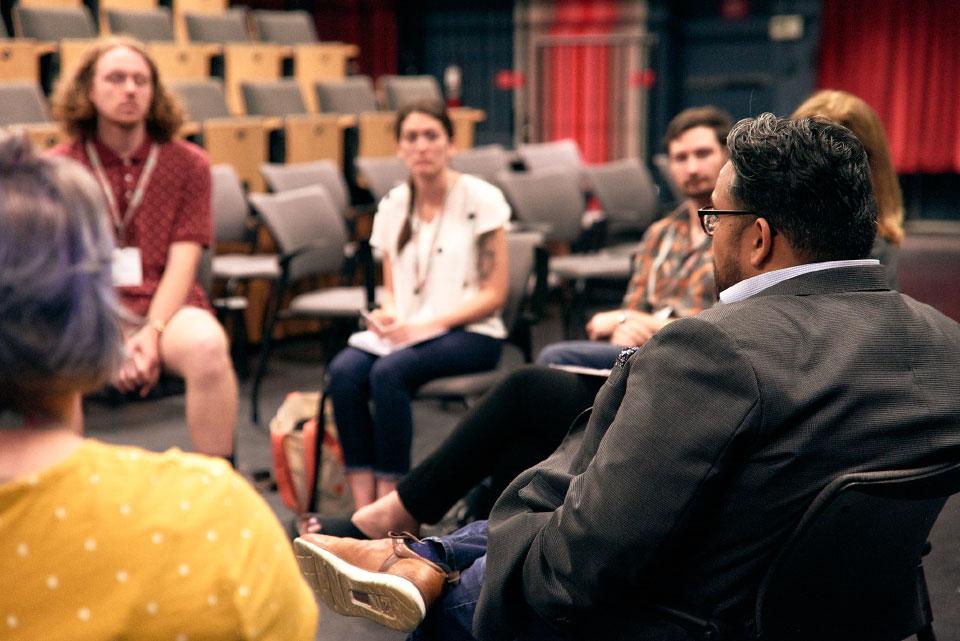 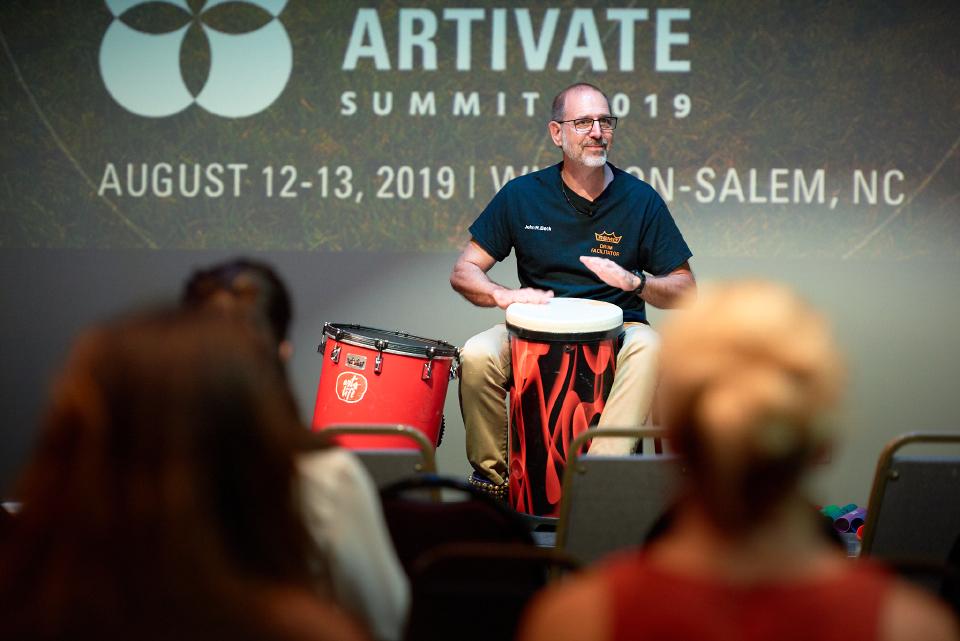 Cheryl Harry believes the Institute’s Creative Catalyst Initiative will broaden the scope of how communities view and value artists. Harry is Founding Director of Triad Cultural Arts Inc., which provides culturally immersive programming to preserve, interpret and exhibit the heritage of Black Americans.

“I’d say the Kenan Institute has slung the door wide open for people to come in. I think of myself now as an artist leader. They’ve expanded the definition of creatives to people who may not be the makers of the arts, but are actually trying to provide platforms for the artists,” she says.

The arts summit inspired Harry to refocus her priorities. In one hands-on session she learned drawing techniques that helped her create a fresh plan. “I am a visual person so this aligned perfectly with my learning style. Through my own personal illustrations — we were taught how to draw in 15 minutes — I was able to chart a path to immediate and long-range goals. The session was very refreshing, and allowed reflection and creative introspection.”

For Cole, Artivate provided an opportunity to see other creatives “in their zones of genius.” She believes artists are hungry for that and Winston-Salem could become a hub for the creative community in the Southeast.

“This city has the most arts assets per capita that I’ve ever seen. We brand ourselves as the City of Arts & Innovation, but I think we are in the very early stages of realizing the economic potential that the arts can have in our community,” she says.

“For a long time, the arts have been seen as something that make it a nice place to live. But that conversation is changing to where the arts are a critical part of our economic development.” 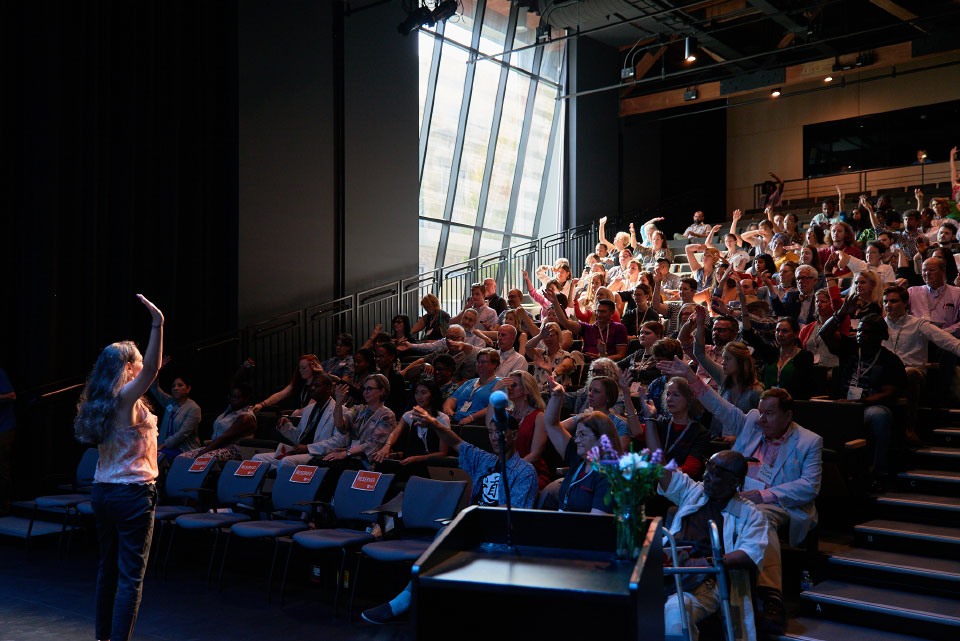 Christinia Soriano, director of Wake Forest University's dance program and Associate Provost for the Arts and Interdisciplinary Programs, talks about the intersection of art and medicine.

Soriano, the professionally trained dancer and choreographer, hopes that her new work eventually will open doors to new careers for artists. She knew nothing about science in 2010 when she was first invited to participate in a research study involving people living with Parkinson’s Disease. Today her No. 1 priority is advancing arts-based interventions in neuroscience. Her research team recently received funding from the National Institutes of Health to conduct a clinical trial testing her dance method in a community of adults living with mild cognitive impairment.

“This is my life’s work now. It’s too important and it’s too big not to devote 110 percent of myself to it,” says Soriano, who in 2018 was named a Next Avenue Influencer in Aging.

“Artists have tools that are just as powerful, if not more powerful, as agents of social change, as community leaders, as powerful synthesizers and collaborators among and between other disciplines. It’s more than just being creative thinkers, it is being creative doers and translating what we learn in our dance studios, on performance stages and in painting studios to solving real problems in the world. For me, the dance studio has become the lab.”

Donovan Livingston’s lab is the classroom. A spoken-word artist and Ph.D. candidate at the University of North Carolina at Greensboro, he’s worked for years helping minority students and their families navigate the transition from high school to college. 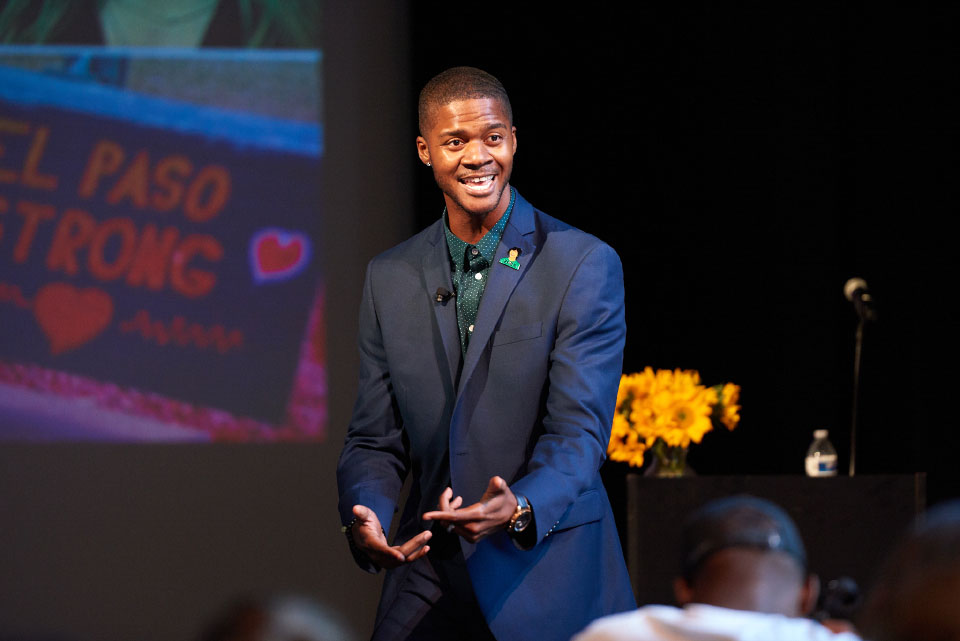 Keynote speaker Donovan Livingston talks about the power of hip-hop as an artform.

Livingston delivered a rousing lunchtime keynote peppered with his chosen mode of expression: hip-hop. He fell in love with the musical genre as a child.

“For me, hip-hop has always been a form of rebel music, a disruptive force for good. A lot of folks, when they hear hip-hop, they only hear the misogyny, the hyper-masculinity, the materialism. A willingness to listen and go deeper has informed to the work I do,” he explains.

“For my students, hip-hop is often a way to navigate those feelings of discontent, of injustice, of imagining a world that does not yet exist. Hip-hop has created that imaginative space for me to grow as both a creator and an educator.”

Livingston was pleased to see diversity in the audience at Artivate — in age and race, walks of life and profession. Next year he’d like to see even more diverse artists taking center stage.

“It’s important that we expand our definition when we say art. It’s important that we make room for the tattoo artist, the barber, the people who do rap and hip-hop. It’s when you have marginalized voices that are front and center, there is much progress to be made,” he says. “When we make room for artists like that, only then will we be able to build the creative community that we desire so deeply.”

“Clearly there is an interest to make the city into a hub for the arts and innovation. I feel blessed to even be here while it is all happening,” she says.

“We should all start to answer that call to be in service of that vision. If we do it right, and are diverse and inclusive in how we do it, Winston-Salem will be a beacon for the United States of America, not just the Southeast.”