Creative Catalyst Mayra Rodas builds a chessboard in the Wood Studio at Mixxer.

How does one do the work of creating a nonprofit and then reach the communities that might most benefit from its services? It's been a challenge for Alan Shelton since 2018 when he opened Mixxer, a community makerspace, near downtown Winston-Salem.

For Shelton, the answer lies in part in the art of storytelling. To that end, Mixxer has partnered with the Thomas S. Kenan Institute for the Arts on a 2020 Creative Catalyst Fellowship in Community Engagement. The fellowship, supported by the Kenan Institute with additional support from the Institute for Emerging Issues (IEI) at North Carolina State University, began in August and runs through February 2021.

Filmmaker and UNCSA School of Filmmaking alumna Mayra Rodas (B.F.A. '20) is the Creative Catalyst Fellow at Mixxer and has been working to connect with members of the nearby Boston Thurmond neighborhood, as well as exploring ways to use her medium to share the Mixxer story with the community.

Building an organization to serve

From the outset, the concept of Mixxer was formed with the needs of the larger community in mind. "The way Mixxer got started was I had a very profound need for tools and a place to use them. And I realized others have the same need," Shelton says. He began doing research and learned that such places existed and had a name — makerspaces.

The space opened to the public in 2018 and includes tools that allow members to accomplish everything from repairing a lawnmower to building wood furniture. Tools include basic equipment as well as top of the line laser cutters, 3D printers, commercial sewing machines and a computer lab with design software — along with resources like workshops to help members learn how to use them. 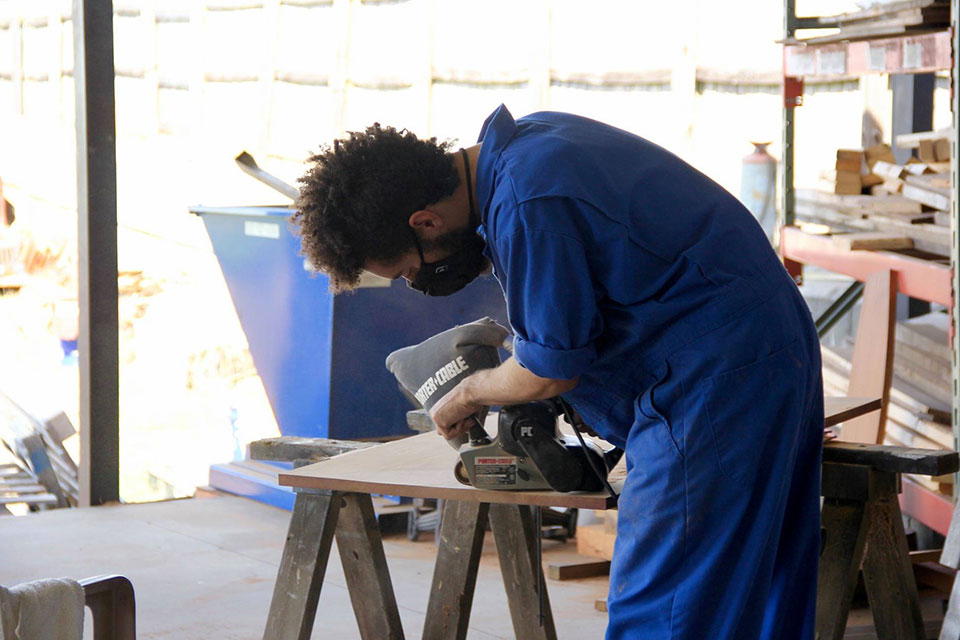 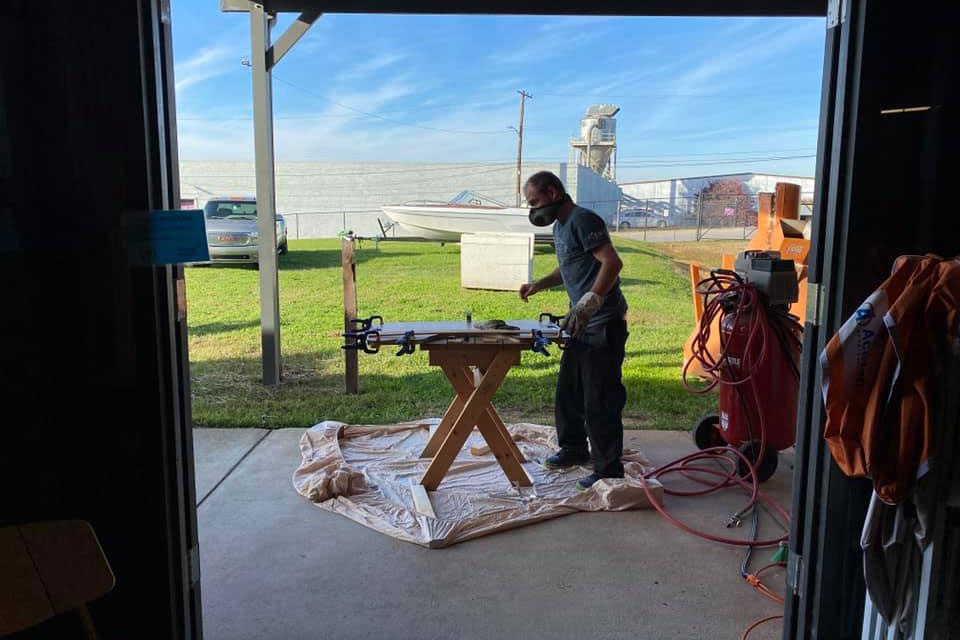 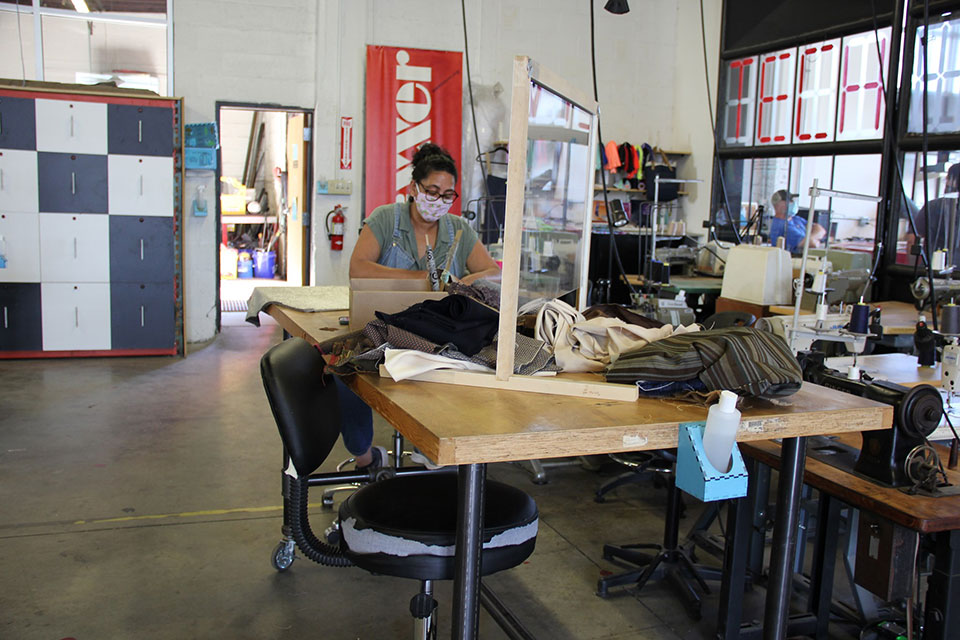 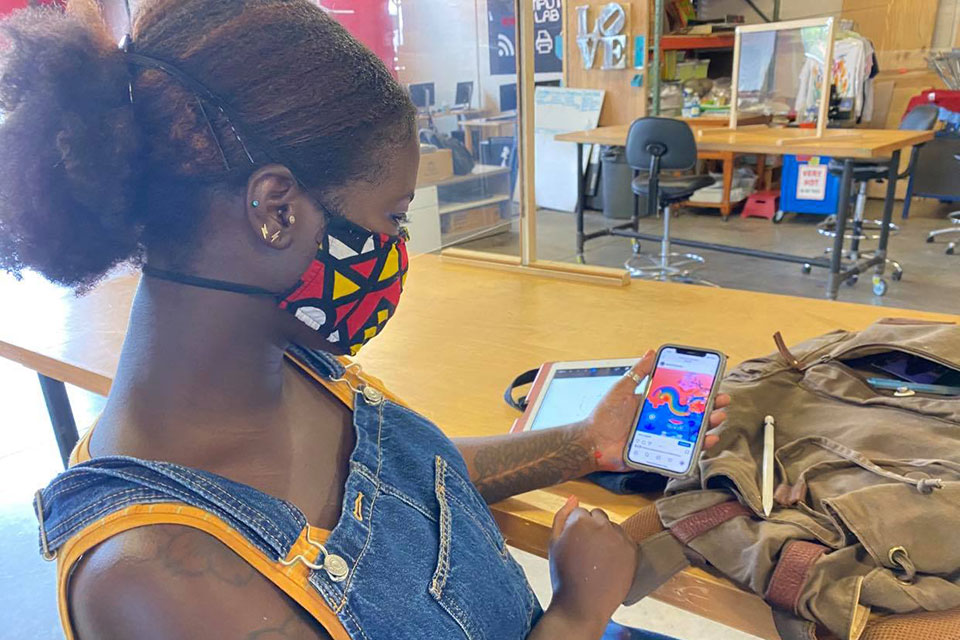 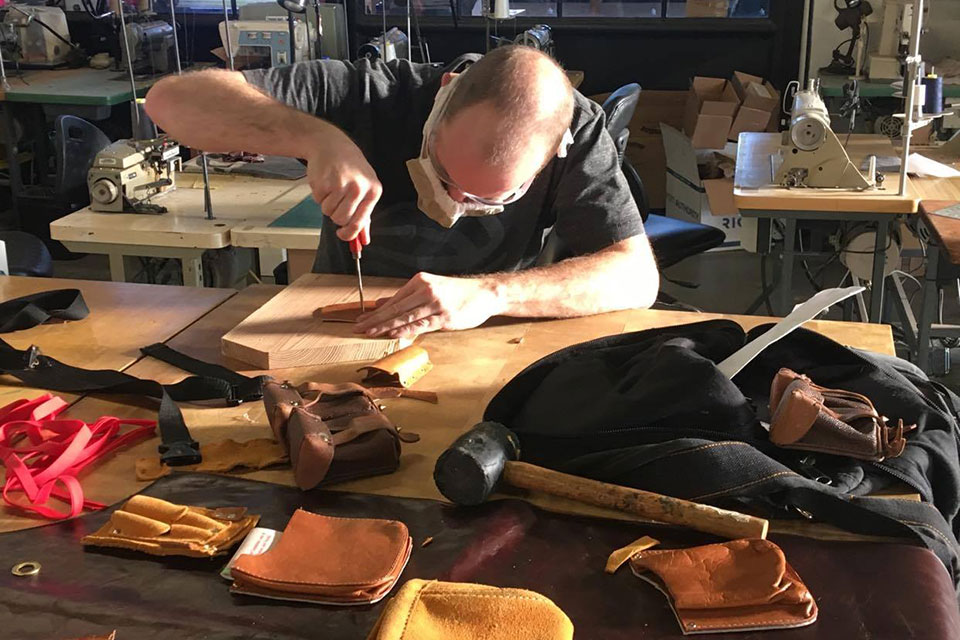 Participation in Mixxer is membership-based, around $50 per month for an individual, with discounted rates for students and families. And while the Mixxer community is stronger than Shelton could have hoped for, he realized there was a need to serve those who may not be able to afford the monthly fee.

"I thought, 'How can we live up to our mission and make Mixxer accessible to everyone?' One problem that our organization, and organizations all over the country, face is that there's a population of people that are traditionally left out," Shelton says. "It can be hard to reach them, but I don't want to just say what I think they need. We want to be inclusive, not exclusive. And it can be hard work to figure out how."

Pursuing a passion in the arts

As a film student, Rodas first heard about the Creative Catalyst Fellowship through a class she took in partnership with the Institute. "Two of the fellowships caught my attention because they were related to working in the community," she says. "I was really drawn to the mission of helping the community. It's something I want to do with filmmaking."

Rodas has been drawn to the idea of combining her pursuit of art while simultaneously helping others since she was a kid.

"I grew up in Venezuela in a poor area, where the arts were not really something realistic or sustainable to pursue," Rodas says. "But my parents never told me I couldn't be an artist." Her family moved to the U.S. when she was 15 and in high school she was able to further explore what a career in the arts might look like. "I took a class in digital imaging," she says. "And I realized how much of an impact you can make behind the scenes."

The Creative Catalyst Fellowship has given her the space to explore that passion and the ways in which storytelling through film can be interwoven with community engagement initiatives.

Rodas' fellowship work at Mixxer has been two-pronged — finding ways to connect meaningfully with the surrounding community and exploring how best to tell authentic stories about Mixxer that capture its spirit and the opportunities it offers.

"I get to meet different artists every day and people are always willing to teach you their craft," Rodas says. "Mixxer is a place where you'll get to learn what you want to learn and everyone is doing something for the first time. I learn something new every day."

One such story occurred when she saw a fellow Mixxer member building a chessboard. "I asked him how much he'd charge to make a chessboard for me," Rodas says. Instead of selling her a board, though, he offered to help her make one for herself. "It's one of the best things I've ever made." Her goal is to create videos that capture that ethos and share it with the broader community. 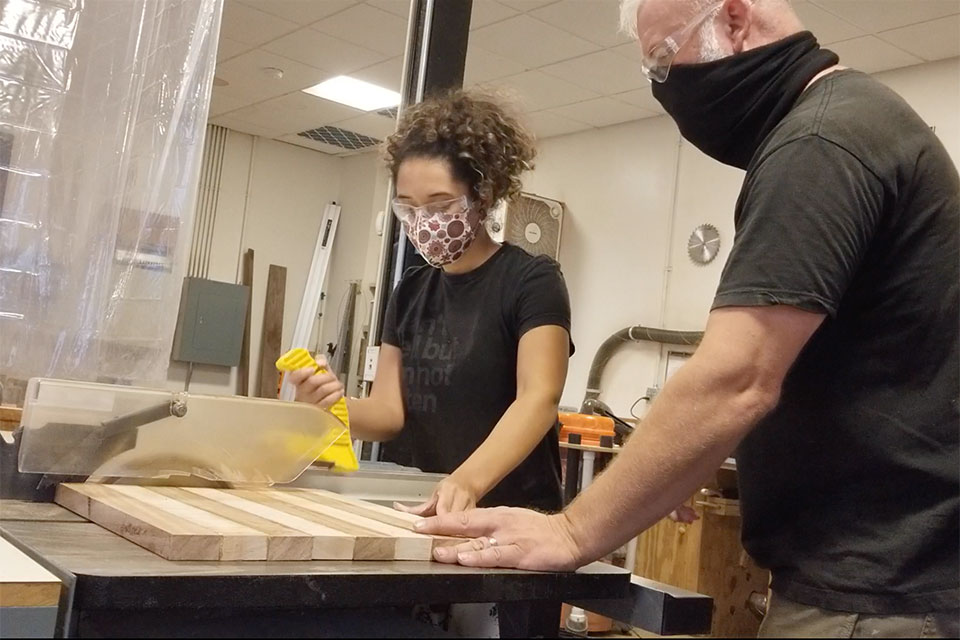 Building a chessboard in the Wood Studio at Mixxer.

She spent the first part of her fellowship filming member stories to be be shared via Mixxer's social media channels. She's also working on a video tour of the space that will be available in English and Spanish. "It's hard to grasp all of the things Mixxer has without being in the space," she says. A video tour accomplishes that, and in a socially distanced way. She's now completing the time-intensive post production work.

In addition to the challenges of social distancing during the pandemic, it's been somewhat difficult to get the message out among so many other organizations doing the same. "It's been a challenge because of the pandemic," Rodas says. "There's so much going on, it can be hard to get peoples' attention."

She has visited the Boston Thurmond neighborhood, where she distributed fliers door to door (with safety measures) and collected feedback through conversation. "It's important to find out what the community needs," Rodas says; instead of simply telling people what the space offers, she wants to know how Mixxer can meet existing needs. "For example, they have a lot of ideas about starting businesses. And I ask them how we can meet that need."

Partnering within the community

Shelton agrees with Rodas, the pandemic has increased the number of organizations trying to reach people and made it difficult, in some ways, to be heard. "We are a nonprofit, but we aren't providing a basic need like food or shelter," he says. "As an organization that provides tools, how do we connect with people and offer this opportunity to those who can't afford it?"

Instead of trying to vie with organizations working to meet essential needs, Mixxer is partnering with them through a program called Thrive, which began in October. They canceled a planned open house, and instead invited a smaller group of representatives from organizations like Habitat for Humanity and the Positive Wellness Alliance to hear a panel of guests, tour the Mixxer space and have a meal.

The idea is that those organizations can then identify people they serve who could benefit from Mixxer's resources. To those who are interested, Mixxer offers one-on-one mentoring sessions where participants can build something from a "menu" of projects to familiarize themselves with the space, tools and services. It also gives Mixxer the opportunity to engage in conversation and find out more about the community's needs and roadblocks.

Taking the next step as an artist

The fellowship at Mixxer has offered Rodas plenty of lessons of her own. "I've learned that nothing is easy in the artistic field," she laughs. "If there's a problem, you solve it and move on to the next one … it's always a learning process."

She's also enjoyed the other components of the Creative Catalyst Initiative, completing the Certificate program and attending the annual Artivate Summit. "It's great being in this group of fellows and hearing that we are all in the same space, trying to figure out what's next and how we're navigating through these times," she says.

The Creative Catalyst program helps you figure out who you really are as an artist. You may already know what you want, but in writing it down, you begin to see the patterns and learn how to communicate them.

"There is a lot of self-reflection. The Creative Catalyst program helps you figure out who you really are as an artist," Rodas adds. "You may already know what you want, but in writing it down, you begin to see the patterns and learn how to communicate them."