Jazz vocalist, composer, songwriter and collaborator Becca Stevens (HS ’02) came to the University of North Carolina School of the Arts her junior year of high school to study classical guitar. Her time at UNCSA changed her life’s trajectory. The Becca Stevens Band has been featured on NPR and has toured the world. She’s collaborated with jazz greats like Brad Mehldau, Esperanza Spalding, Snarky Puppy, Jacob Collier, Alan Hampton and others like David Crosby. She’s part of what JazzTimes magazine labeled a “vocal supergroup” called Tillery. She is a featured vocalist on “The Confession” on Billy Childs' Grammy Award-winning record “Map to the Treasure: Reimagining Laura Nyro." Her life, like her voice and music, has many layers that all blend into the wonderful artist she’s become. 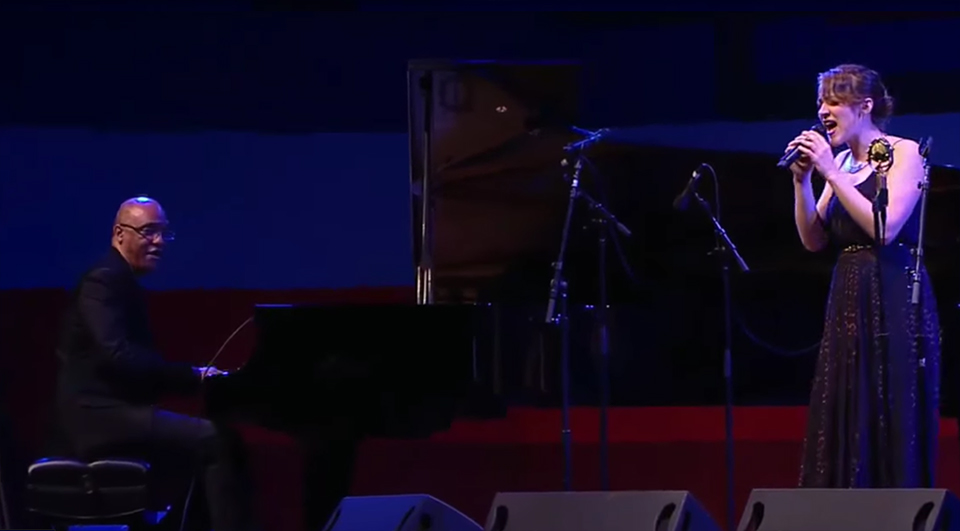 Becca Stevens performing "The Confession" with Billy Childs at the Monterey Jazz Festival in 2014.

Growing up in a musical family, Stevens performed at area festivals and in local performances with her family’s band The Tune Mammals. She also performed in musicals, sang opera and played works composed by her father. To her, performing was a place of comfort. Though both her parents are classically-trained singers, they exposed Stevens to the richness of folk, Irish and Appalachian musical styles that reverberate in North Carolina. There was always great singing in her home, so one could say she had her early vocal training by osmosis.

The Winston-Salem native was introduced to UNCSA early through the Preparatory Dance program. Her mother graduated from the school with a master’s degree in Opera. For her high school junior year, Stevens knew she wanted to come to UNCSA, then known as NCSA. Though she danced, she said she didn’t feel she was the caliber to be a dancer at UNCSA. She always sang, but didn’t want to study opera. She toyed with trying out for the acting program, but wasn’t old enough to audition. Her mom suggested she audition for the Classical Guitar program for she had been playing guitar for several years. She played songs from her father’s classical and folk compositions, pop songs and her original compositions. She didn’t think she’d make it, but she did.

It was like a gift for the rest of my life because it was at that point during my studies I realized I wanted to just be a musician – and not a part of the musical theater world anymore.

“It was such a perfect fit,” Stevens said. “It was like a gift for the rest of my life because it was at that point during my studies I realized I wanted to just be a musician – and not a part of the musical theater world anymore. It was a huge turning point in my life because after that is when I fused the classical guitar technique with my guitar music and the rest is history.”

Stevens finds her voice in jazz

Following a gap year where she played locally in a band with her brother, Stevens headed to New York’s New School of Jazz and Contemporary Music to study voice.

“It’s funny,” she said. “I wasn’t ever much of a piano player, but I managed to place out of a lot of the early ear-training, theory and piano classes (in college) because of studies I had in just those two years at (U)NCSA. I just had an understanding on the guitar rather than the piano.”

Her plan in going to New York was to collaborate and perform her way through the city. She collaborated with musicians and sang with known and rising jazz greats. By the time she graduated, she had been working a lot in the city and made Brooklyn her home.

I was excited to be in New York, to meet as many people as I could and to have as many collaborations and musical experiences as I could, which I really think made my time there fruitful.

“I was excited to be in New York,” she said, “to meet as many people as I could and to have as many collaborations and musical experiences as I could, which I really think made my time there fruitful.”

Two people Stevens collaborates with are jazz vocalists Rebecca Martin and Gretchen Parlato. The three formed the trio Tillery, and offer workshops and masterclasses while also performing together. The group’s name comes from one of Stevens’ favorite lyrics is in the song “Tillery.” She spent a couple of years writing and composing a song to honor the life of Winston-Salem musician Kenya Tillery, a film composer and songwriter who died from cancer in 2008 at age 36. Tillery (M.F.A. ’98) received a Master in Music in Film Music Composition from UNCSA School of Filmmaking.

“I had come up with all of the instrumental pieces and lyrics to half of a song, but it still felt like something was missing. I had written more of a warmer season of poetry like summer and spring – the letting go of the heaviness.  I was searching for something else to finish the story when I opened a book that my Dad gave me for Christmas that was called 'No One Can Stem the Tide' by Jane Tyson Clement,” Stevens said. “I opened it right up to a page that was exactly the numbers of beats per line and exactly the subject matter that I was looking for but couldn’t put into words.”

Clement had died, but her publishing company and family allowed Stevens to use Clement’s poem. The poem’s stanza, “So may we shout, so may we sing, O blessed thaw, O holy spring,” finished her song. 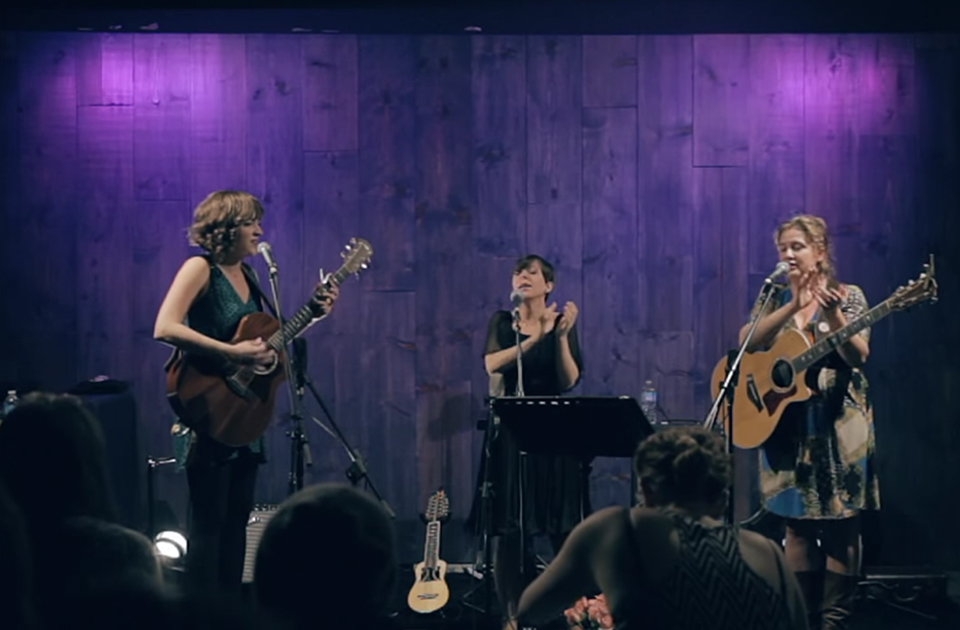 The three main instruments Stevens plays in her band are the guitar, ukulele and the charango, which is a small 10-string lute. The back of the South American instrument is traditionally made from an armadillo shell.

I just fell in love with (the charango). The nylon strings are harp-like, like a classical guitar, but each string is doubled. It gives this percussion almost mandolin-sounding quality.

“I just fell in love with (the charango). I fell in love with the sound,” Stevens said. “The nylon strings are harp-like, like a classical guitar, but each string is doubled. It gives this percussion almost mandolin-sounding quality.”

As a composer, Stevens uses songwriting software like GarageBand. But whether it be software or a soft paint brush, the process of layering ideas, sounds or images is the same.

“I have all these ideas in my head and I layer them to find the perfect balance before teaching it to my band.”

Her songwriting process involves creating complex demos of the songs she’s written at home. She layers her guitar parts, all the vocals, some keyboards and perhaps percussion and then brings it to her band.  In the band sessions, they try out different layers on the song.

“They’re not just hired guns,” Stevens said. “They are part of the palette that makes the ending product.”

With the 2015 release of the “Perfect Animal” album, she not only wrote the songs, but she delved into the technical aspect of studio work to help produce the album. For music videos, Stevens maps out the story she wants to layer visually with the song. In the video for “Weightless” from the 2011 album with the same name, the opening shot is of a girl on a swing and you see it from the girl’s perspective as if the viewer is swinging weightlessly too. The opening shot of the video for “Imperfect Animals” from the album “Perfect Animal” has her dressed as a classic 1950s housewife character with a monkey. 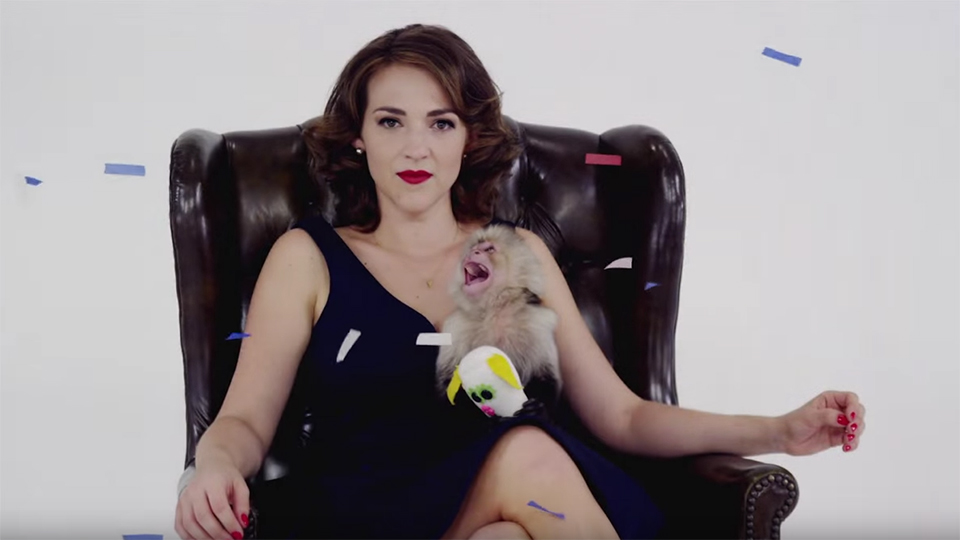 “With ‘Imperfect Animals’ I was trying to play around with some parodies in the lyrics,” Stevens said. “(The character) is striving for this unattainable version of herself. There is an intensity building up and you can feel that the idea of perfection is going to crack and maybe blossom into something better than what you had in mind.”

And how does the monkey fit in?

“Maybe her husband is a monkey,” Stevens said with a laugh. “Like not only does he not appreciate (the perfection) but it’s not even on his radar. Then at the end of the video we live in harmony after the need for perfection is released.”

Stevens’ life is infused with art whether she is composing, touring, collaborating or teaching music in workshops or even to prison inmates through Musicambia.

“They bring music into this world where people are seen only by what crimes they’ve committed. They aren’t used to being able to be open or trust one another. They have to keep to themselves,” Stevens said. “They bring in these music programs where finally they are judged based on who they really are and what they are creating together. The focus is not on what you did, but what you are creating. They are given something that makes them feel worthy. When they get out of prison they have something to work towards, something to show their families. I believe so strongly in the healing power of music and how the power of music brings people together and to form communities.”

How does she manage so many things?

“I think it is a constant process of adding things on and taking things away,” Stevens said. “It’s finding a balance between working a lot, touring a lot and then figuring out when I need to be home to recoup. It is a lot like spinning plates, and the nice thing is that it is all connected.”

When she’s on the road with the Becca Stevens Band or with Tillery, or working on a new collaboration, she said it still feels like a constant forward motion of learning the big picture of who she is as an artist and as a composer.