The truth about women: UNCSA production celebrates strength and wisdom

A play about women and their relationships with each other, The Women, by Clare Boothe Luce is an assignment tailor-made for costume designer Michelle Pflüg, a senior in the School of Design and Production, and is a great fit for guest director Giovanna Sardelli.

A cast of 16 women from the sophomore, junior and senior classes of the School of Drama will present The Women at 7:30 p.m. Thursday through Saturday, Feb. 25-27, and at 2 p.m. on Sunday, Feb. 28, in Freedman Theatre of Alex Ewing Performance Place. Tickets are $18 regular and $15 for students with valid ID, and are available at uncsa.edu/performances, or by calling the box office at 336-721-1945.

Set among Manhattan socialites during the height of the Great Depression, Luce’s dark comedy tells the story of Mary Haines, a well-mannered wife who learns that her wealthy husband, Stephen, is having an affair with Crystal Allen, a distinctly less well-behaved sales clerk. Mary’s relationships with her friends, her mother and her young daughter are developed through acid-tongued dialogue set in locations such as beauty parlors and women’s clothing stores.

Sardelli says the play runs the gamut from broader physical comedy to tender mother-daughter moments. “It has seeds of truth planted throughout,” she said. “Clare Boothe Luce has crafted a world -- quite a remarkable world -- that revolves around very specific women. Yet in her portrayal of more than 40 women, she reveals so many different points of view and different circumstances.”

Luce’s 40 female roles for 18 cast members (16 UNCSA students plus two young girls splitting the role of Mary’s daughter) meant a lot of costumes for Pflüg to design. She created 70 costumes, including shoes and undergarments, for a total of more than 600 costume pieces. 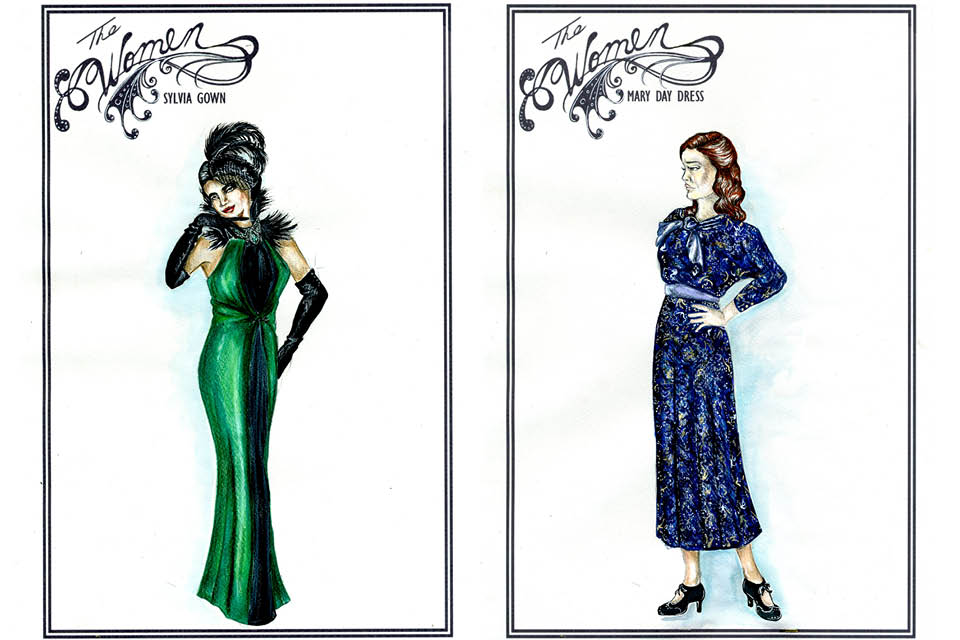 Costume design for "The Women"

“The costume shop is building 10 looks for the play, and the rest of the items have been found though local costume shop rentals, local and online purchasing,” she said.

Pflüg said the costumes are crucial to the play. “The show is very big and there are a lot of actors on stage that have to be considered,” she said. “It is very important that the eight main socialite women (Mary and her friends) stand out on stage. This allows you to best follow them through the different scenes in the show,” she said.

Pflüg created a color palette for each of the main characters and then designed the remaining costumes to complement and define their roles. “There are many different characters, each with an important story to tell, and each one has to be made readily identifiable for the audience.”

Sardelli said most of the women’s stories, like the plot of the play, revolve around men “as did everything at that time - but the play is about the women. We are treated to seeing women in their private surroundings where they are free to talk and behave how they like,” she said.

The behavior isn’t always flattering. The play, which was first performed on Broadway in 1936, has been criticized for its portrayal of woman as shallow, conniving creatures who concern themselves mainly with finding rich husbands, and who will betray their dearest friends in the process. But Sardelli says those critics are missing the point.

“Luce wants us to laugh at ourselves,” she said. “She gives us permission to laugh at that which makes us silly and competitive but she also celebrates the strength and wisdom of women.”

The Women was daring fare in the 1930s, addressing themes of the modern woman, gossip, beauty standards, socioeconomic class, and marriage and divorce.

When news of her husband’s affair hits the gossip columns, Mary flees to Reno, Nevada, where liberal divorce laws shielded society women from scandal associated with infidelity and dissolving a marriage. She remains in Reno post-divorce to allow the gossip to die out, but learns while she is there that her husband has married Crystal. Now their roles are reversed, with Crystal the secure wife of a wealthy and successful man, and Mary is single once again. Their costumes reflect changes in status.

“Mary’s costumes in the beginning of The Women show her as secure, with very clean and nicely tailored looks,” Pflüg said. “As the show progresses, her looks become softer in silhouette as she is stripped of the security she once had. Towards the end of the play, her costumes are designed for her ‘big moment’ and thus are bold, beautiful, and graceful.”

Crystal is a different story. “Crystal's looks are designed to emphasize her body, and this remains constant throughout the show,” Pflüg explained. “We explore how she has started off as a perfume saleswoman who later becomes the wife of a successful man. Her looks progress to be more luxurious as the show continues.”

As the plot develops, Mary and her socialite friends learn a secret about Crystal, and they plot to expose her, winning Stephen back for Mary. Throughout the play, scenes shift from Mary’s Park Avenue apartment to a beauty parlor, maternity ward, Reno resort, dressing rooms, powder rooms, and high society parties, and all with corresponding costume changes.

One of the most challenging for Pflüg is a spectacular evening gown for Mary’s friend Sylvia, the most fashion forward of the society ladies.  “The evening gown has to help tell that part of the story,” Pflüg said. “I had a lot of fun designing Sylvia's gown; I can’t wait for everyone to see it!”

Though set in the 1930s, the play is relevant today because of the characters and their relationships, Sardelli said. “I think every woman in the audience will see herself reflected somewhere on the stage,” she said, adding “there are clear moments in the play where men are receiving some helpful hints about how they might view and treat women.

“Clare Boothe Luce found a very fun way to educate the men in the audience about the lives of the women who surround them without preaching.”

Michelle Pflüg
Michelle Pflüg is a senior from Whittier, Calif., who previously worked as a costume assistant for UNCSA’s 2015 production of Guys and Dolls, and designed costumes for a student film, "Just a Body." Her love of costuming started at the age of 12 when she took a history of fashion course at a local community college. She was later accepted into the Production and Design conservatory at the Orange County School of the Arts in Santa Ana, Calif.

Pflüg chose to attend UNCSA because the School of Design and Production affords students the opportunity to specialize in a specific field of study such as costuming, sound, or scenic design, rather than pursue a general theater degree offered by most universities.  “I was further drawn to my major of Costume Design and Technology at UNCSA because it is designed to give students the opportunity as an undergrad to concentrate on either a technology or design track within a costuming major,” she said, adding, “To top it off, the instructors here are top notch professionals and are highly experienced in their given fields.”

Sardelli spent more than a decade on the faculty of the Dance Department and five years on the faculty of the Graduate Acting Program of New York University, the program from which she received her MFA. She is also a graduate of their Director’s Lab. Though based in New York City, she is the director of new works for TheatreWorks Silicon Valley.

Upcoming projects include Mr. Wolf by Rajiv Joseph for Cleveland Play House and Velocity of Autumn by Eric Coble for TheatreWorks.

Clare Boothe Luce
Before becoming a playwright, Clare Boothe Luce worked as a journalist, serving as an editor for Vogue and Vanity Fair, and as a war correspondent for Life during the early years of World War II. Married at the age of 20 to 43-year-old wealthy businessman George Brokaw, she divorced him after six years and later married Henry R. Luce, publisher of Time magazine and founder of Life magazine.

Her second play, The Women, drew on her experiences with high society women, and her own Reno divorce from her first husband. The Women was a great success on Broadway in 1936, and was adapted for the screen in 1939.  Her subsequent successful plays Kiss the Boys Goodbye in 1938 and Margin for Error in 1940 were also made into major motion pictures.

Luce served two terms in the House of Representatives as a Republican from Connecticut. From 1953 to 1956, she was the Unites States ambassador to Italy. She was awarded the Presidential Medal of Freedom in 1983, and died of cancer in Washington, D.C., in 1987.