Orlando Haddad and Patricia King have been best friends for forty-one years. Their friendship is the base of a strong marriage and a flourishing musical career that has allowed them to travel the world together, performing as Minas—a highly-acclaimed, Grammy-nominated bossa nova duo. And it all began at UNCSA.

In 1975, Haddad and King were both students in UNCSA’s School of Music. King, who moved from Pennsylvania, studied opera, while Haddad enrolled as the first international student from Brazil.

“I already loved Brazilian music,” says King. “So I hunted Orlando down.”

The duo began making music together before graduation, and the close-knit campus community was supportive.

“Our teachers helped us to focus our direction,” says King. “The discipline and practice and the sense of training that is impressed upon students at UNCSA can apply to your work, as well as to your whole life.”

They married in 1979 and lived in North Carolina for several years before moving to Brazil, where they created their first record, mixing their musical backgrounds in jazz and bossa nova.

Haddad and King returned to the United States in 1984 and have spent the last thirty-two years raising their family, composing, recording and performing.

Though they often perform as a duo, both Haddad and King enjoy working on solo projects. King has composed an opera, La Giara, which explores the history of her Sicilian ancestors and their immigration to America. Haddad has written works for documentaries, composed a chamber music piece and was commissioned to work with The Orpheus Club of Philadelphia.

Whether working together or exploring solo opportunities, it’s an asset to have a spouse in the same industry.

“Music is the most important thing,” says Haddad, adding that even simple tasks like planning and warming up for a performance are completed together.

King echoes his sentiment. “We can bring music to each other for feedback and vet our opinions and tastes.”

Last year, Minas released “Symphony in Bossa,” which was a labor of love for the duo, as well as for their many close friends and supporters. The record was funded in part through a digital fundraising campaign that exceeded its goal of $20,000. Recorded in memory of Bill Zaccagni, a longtime friend and colleague at University of the Arts in Philadelphia, “Symphony in Bossa” was an immediate hit and a 2015 Grammy contender.

Returning to UNCSA to celebrate the success of “Symphony in Bossa” in January, Haddad and King taught master classes and shared the stage with students, giving a memorable bossa nova performance to a sold-out crowd.

What was it like trekking across campus together once again?

“It’s been a pleasure,” says Haddad. 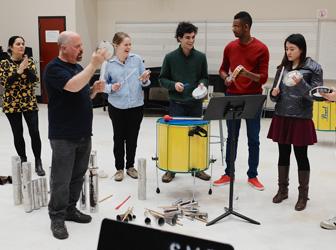 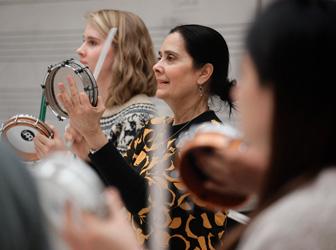 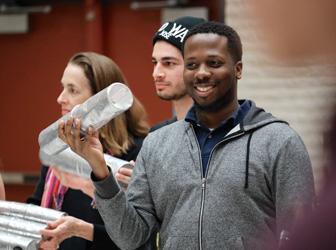 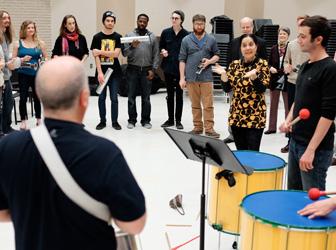 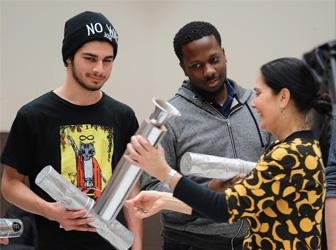 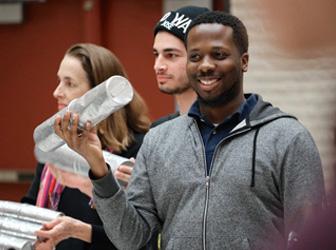 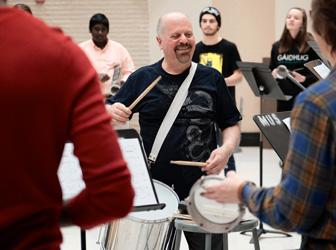 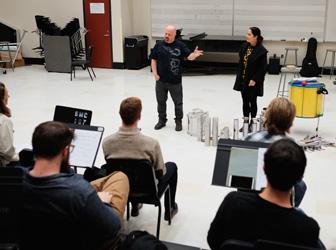 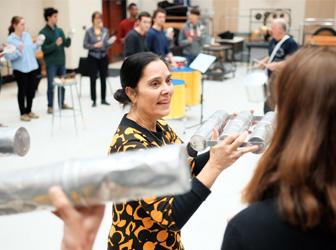 The January 29 performance gave the duo the opportunity to experience the stage as if they were students once more.

“It’s amazing to see the experience of the student performers on stage,” says King. “They are so full of life and in that moment on stage, they’re full of wonder as well.”

When they’re not on tour, Minas calls Pennsylvania home. King enjoys spending her free time writing, while Haddad is the chef of the house.

“During the day, I often find myself thinking ahead to the evening, when we’ll come home and enjoy dinner together,” he says.

Minas will re-release their first record, “Num Dia Azul,” this spring on vinyl and cd. They continue to tour the world together, performing a combination of bossa nova and jazz. Listen to their music on their website.