Secrets are sewn into The Nutcracker costumes: jewels and silks bought off the streets in Singapore, the Snow King’s sleeves tailored for lifting, gloves sewn in the mice costumes so they can battle the Nutcracker and his soldiers. These are just some of the insights University of North Carolina Dance Costume Shop will tell, but not all secrets can be revealed.

“There needs to be a little Drosselmeyer magic,” says Kathy Grillo, director of the UNCSA Dance Costume Shop.

The Nutcracker ballet is a story about a girl who travels to magical lands. Uncle Drosselmeyer arrives at a Christmas party in the opening scene of The Nutcracker, charms the party attendees with illusions and gives his niece Clara a beautiful nutcracker. Later that night a battle between the Nutcracker and Mouse King ensues and the Nutcracker turns into a Prince and takes Clara to the lands of snow and sweets. Along the way, she meets the Snow Queen, Sugar Plum Fairy, Mother Ginger and bands of Spanish, Arab, Chinese and Russian dancers.

The staff of the UNCSA professional Dance Costume Shop work their magic each year to make the costumes not only sparkle with jewels and sequins, but to move and flow for some of the most athletic moves the dancers need to perform. Part puzzle, part design, part technology – all fit together in building and maintaining theses costumes.

“There a lot of things that the audience doesn’t notice about the costumes, but that makes it right” Grillo says.

Spoiler Alert: If you want to preserve the magic of watching the ballet, stop reading here. If you’re intrigued about what you may learn, continue reading, though we dare you to be able to spot these secrets while watching the performances.

The shirt of the Snow King’s tunic is actually two separate pieces made to look as one to the audience explains Lisa Weller, who built several of the menswear costumes in the Dance Costume Shop.

“It is a Lycra shirt with the fancy sleeves,” Weller says as she slides the sleeves through the arm holes of the ornate outerwear, “It gives him the freedom of motion to pick up the Snow Queen as there are some pretty spectacular lifts in that section. Also a normal sleeve has the curve down here. What we have to do in order to let him raise his arms but keep the shirt down is to curve the gusset up. Since the sleeve aren’t set into this arm side, it just stays magically.” 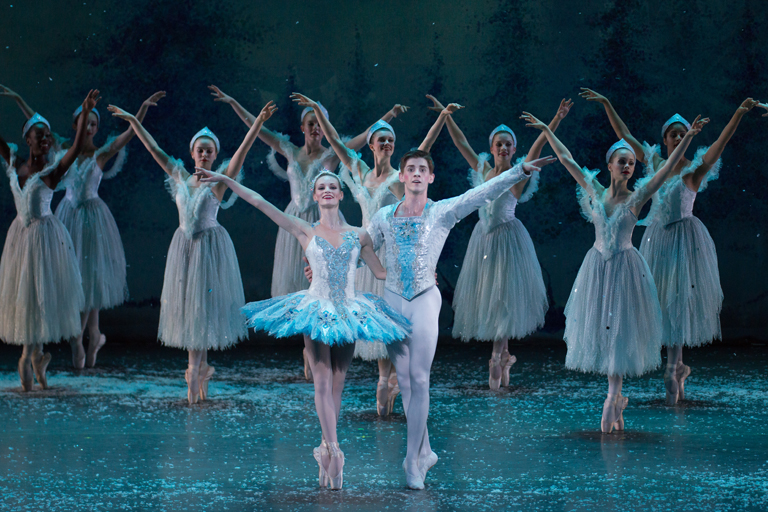 The Snow King's shirt is designed for lots of movement and lifting.

A Tale of Two Nightgowns

Clara, daughter of the host Herr Stahlbaum, changes from her party dress to a nightgown, but she actually wears two nightgowns in the performance. One is plain and the one she wears in Act II has jewels to make it sparkly.

“Her nightgown is specifically designed,” Grillo says, “One of the things that the audience doesn’t notice is that it is built on a leotard because when she twirls you may see more of the body. The skirt is built in lots of pieces so it is not bulky up at the top but flows really beautifully so when she spins around the whole thing goes out and flutters.”

Many of the costumes have layers called flat lining which adds strength and sturdiness to the costume. The inner fabrics are sturdy and make it so the costume can hold its shape and the outer fabrics are then gathered over it. Flat lining is done on every costume for different reasons.

“Sometimes it’s for the strength of it. Sometimes it is because that will take the stress on the seams away from the outer fabrics,” Grillo explains. 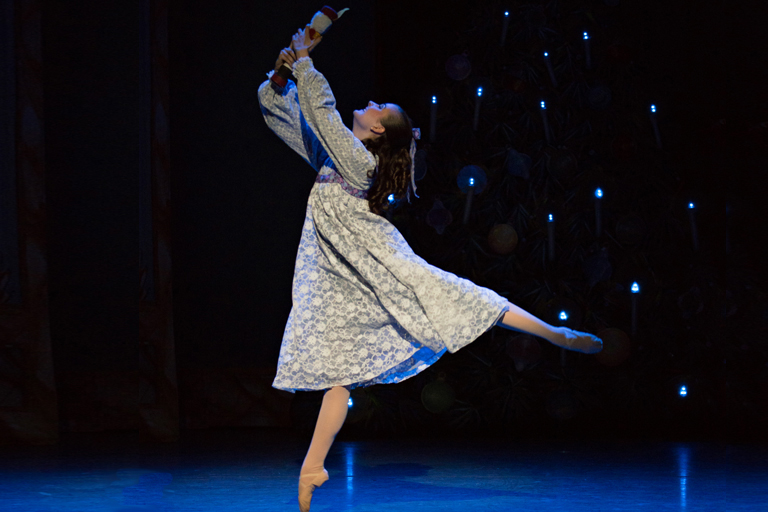 UNCSA’s The Nutcracker has a lot of high school dancers, which presents its own sets of challenges. The main one is that students grow taller and become more athletic as they mature. A costume a high school dancer may have worn his or her freshman year, may not fit them their sophomore year.

Who wears what when is left to Marissa McCullough. Spreadsheets, charts and labels are her secrets to keeping things running smoothly. Once the choreographers give her the casts, she starts to see which dancers have similar torso and leg lengths and are in the same dance or are in the same spots in the dance.

“On a lot of the snow costumes, we make the bodice so the skirts can switch around. There are buttons on the skirts and button holes on elastic on the bodices,” McCullough says. “Just because dancers are the same height doesn’t mean they can wear the same costume. If you try to put a skirt on a person with a long torso and shorter legs, her skirt will be too long.”

Added to the variety of dancers’ proportions that is that the cast has increased, so there may be costumes that are shared by three to five dancers during the production run. For the Dance Costume Shop this means several ways to adjust the same costume. Rows of hooks and snaps can be seen on several of the costumes for the quick changes and costume sharing. 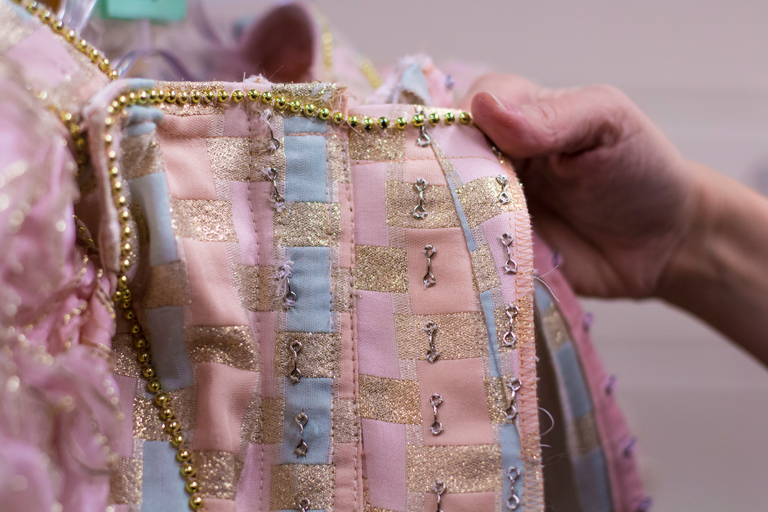 When this package, meaning a set of costumes, was built in the 1990s every remnant of fabric was saved to use for “spare parts” in the future. Boxes of boxes of material are in The Nutcracker storage room to replace when certain parts of costumes, such as collars and sleeves, show wear.

“After 18 years, the silks that have been worn, taken in or taken out begin to deteriorate and need to be replaced,” Weller says. “I spent time working on the party mothers costumes, which are all silk. There are a couple this year that are plaid. I found the proper plaid material, but it meant cutting it so all the lines matched up so you don’t waste any scraps. It was literally like doing a jigsaw puzzle, though no one will know from the audience.”

Every year costumes are evaluated to see what needs to be repaired or to be enhanced before the costume shop launches into fittings and making adjustments for the performers. This year, all of the flower tutus were re-sparkled. Hours will be spent on a costume that may only be on stage for a few minutes, but details matter.

“People may not remember what last year’s costumes look like, but they will say ‘Wow, the costumes are so pretty!’” Weller says. “With a show like this that comes out year after year and that has so much magic to it, we work really hard to maintain the illusion of fresh, beautiful costumes.” 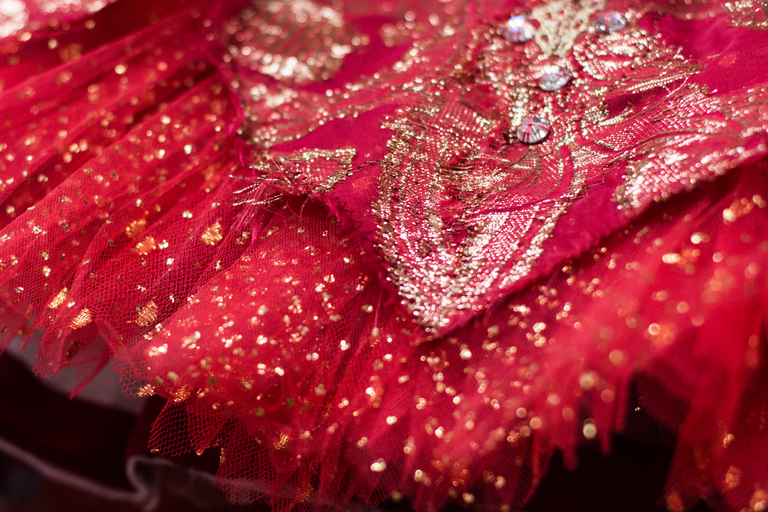 Hand-sewn jewels and other "blings" make the costumes sparkle.

Inside the Dance Costume Shop 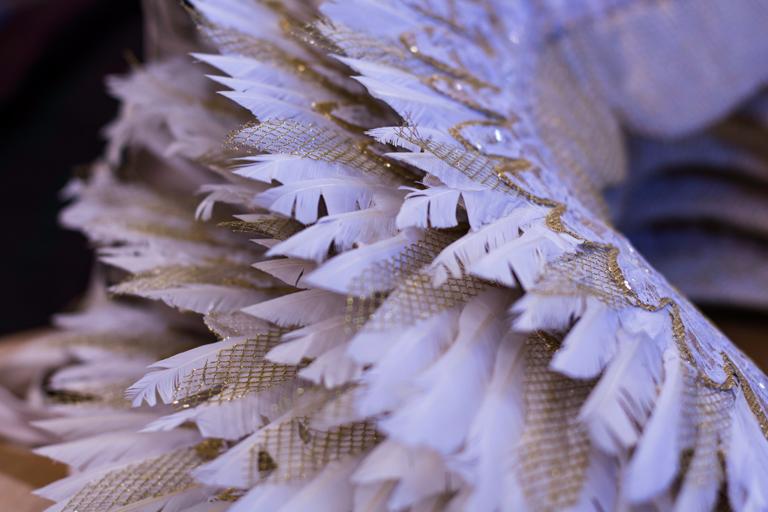 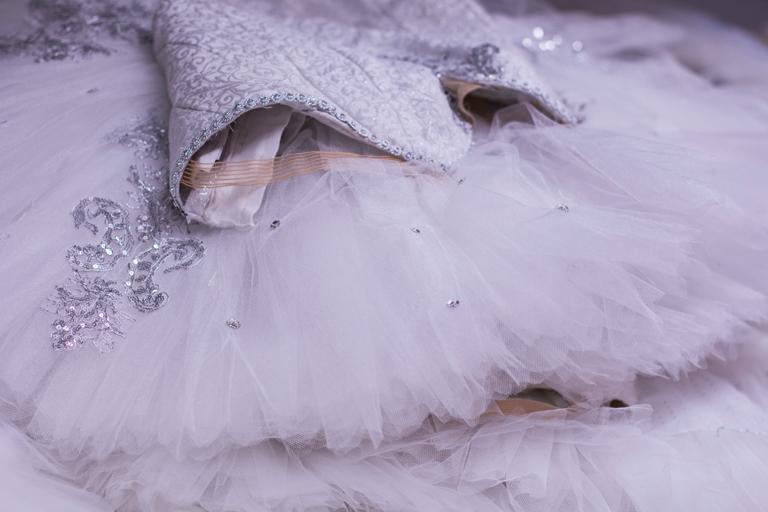 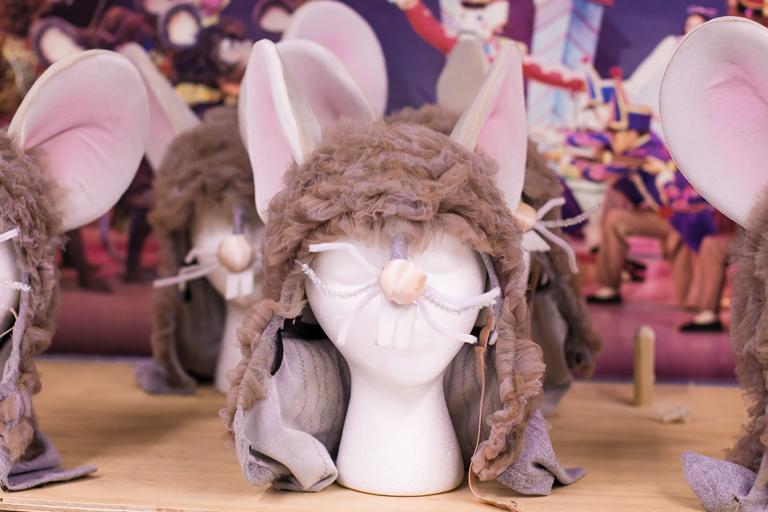 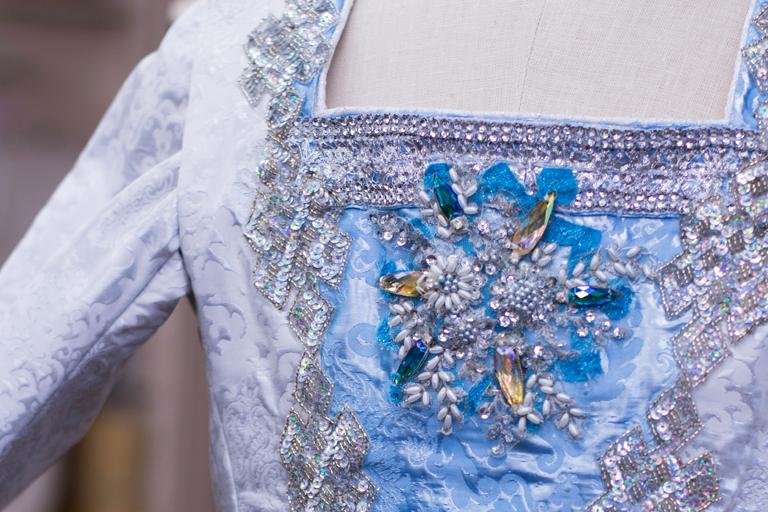 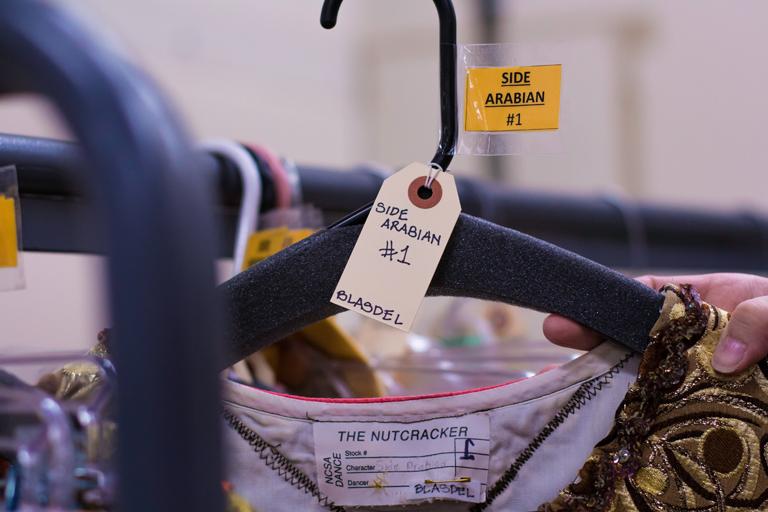 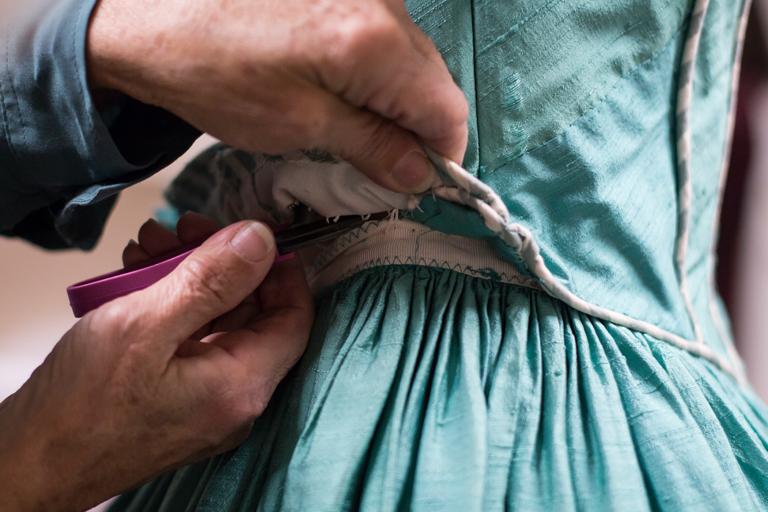 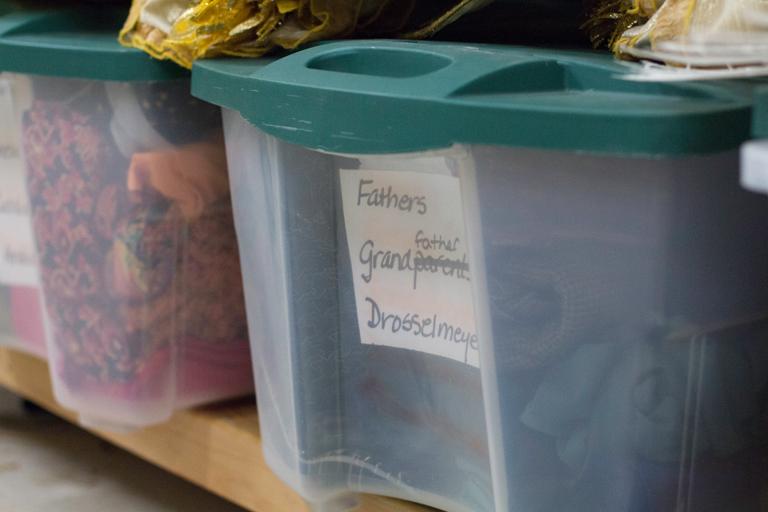 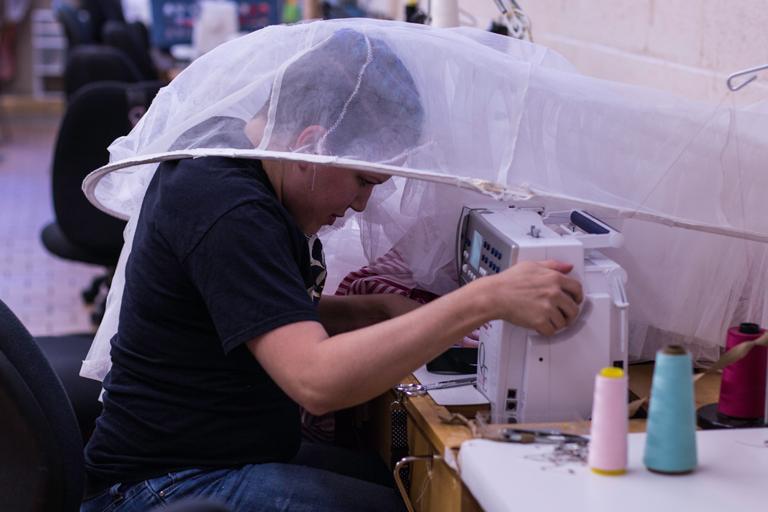