First, female, film: Building a career as a Steadicam operator

The first time Janice Arthur encountered a Steadicam, it was love at first sight. The fact that the camera equipment was relatively unknown at the time, especially in her hometown of Cincinnati in the early 1980s, didn’t faze her. Neither did the fact that the bulky, heavy system was hardly ever operated by women.

Instead, Arthur, now a visiting cinematography faculty member in UNCSA's School of Filmmaking, set out to get one for herself.

The Steadicam is a camera stabilizing system invented by cinematographer Garrett Brown in 1975, and consists of several pieces worn like a harness by the operator. The system allows camera operators to get smooth, steady shots on uneven surfaces and small spaces—like the “Groundhog Day” clip above, shot by Arthur—without the cumbersome tracks used with dollies and with more stability than handheld cameras alone.

It also allowed Arthur the chance to make a career in the world of filmmaking. 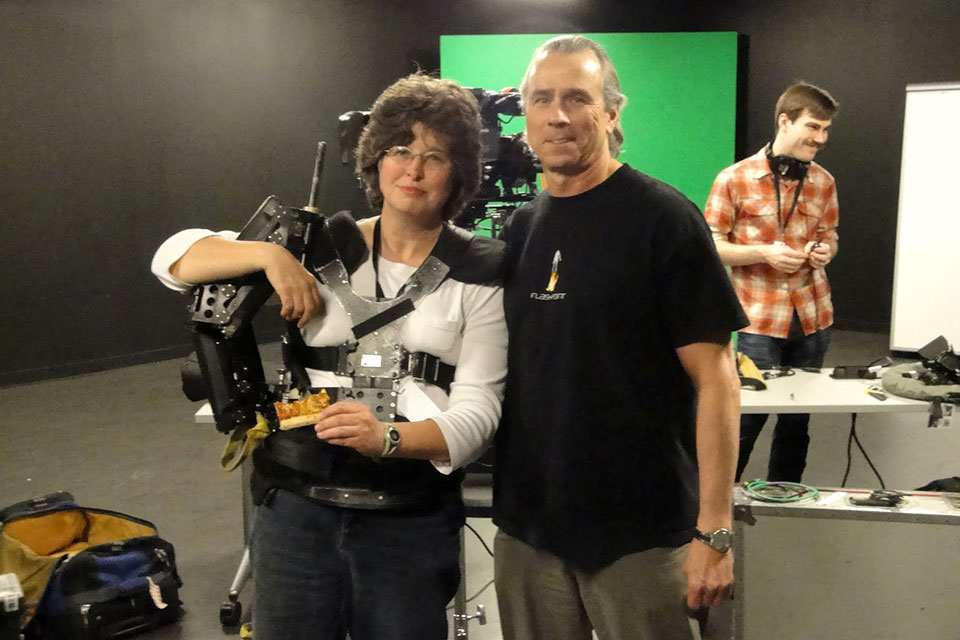 Arthur wearing Steadicam equipment during a workshop in Chicago.

She was drawn to the world of movies from an early age, although it was the allure of fame and fortune that initially caught her attention. Growing up, she heard tales of an uncle who went off to California after World War II and broke into “show business” as an animal handler for Hollywood productions. “It was a time when movies and television were still coming of age,” she says.

But it wasn’t until college, at the University of Cincinnati where she studied in the radio, TV and film department, that she discovered the world of production. “I really liked it because it was both physical and artistic,” she says.

After college, she worked for local television and production companies. “I was blindly, goofy happy to do it,” she laughs. The willingness to work hard was a requisite trait on set, she says, and earned her the respect of her peers.

When a coworker told her about a workshop being held by a local Steadicam operator, it sparked her interest. “There was a guy in Cincinnati who owned one and that was very rare,” she says. At the very least, she figured, she could attend the workshop and have something new to add to her resume.

After the workshop, she was hooked. “I didn’t talk about anything else,” she remembers. She began to look for financing to purchase her own Steadicam equipment, which turned out to be a bit more difficult than she expected. Banks were willing to finance a house or a car, but they weren’t sure what to do with an unknown piece of camera equipment.

Eventually, she was able to secure a loan from a small credit union, and with some of her own money thrown into the mix, purchased a used Steadicam.

Still, there wasn’t much work for a Steadicam operator in Ohio. She decided to move to Chicago, close enough to home, but big enough for her to find work as the new “specialized” cinematographer she was.

The technology was new enough that her training, coupled with the fact that she had her own equipment, gave her an edge. She wasn’t just the first female full-time Steadicam operator, but one of the first Steadicam operators, period. “It was something that not everyone could do,” she says. “It made me a bit of a specialist … I got pretty well known in the production community.”

Her work continues to this day, and often when Steadicam shots are needed, production companies know to give her a call. She has worked on countless commercials for companies like Disney and Frito Lay, television shows like “ER” and “Chicago Hope” and major motion pictures like the Billy Murray classic “Groundhog Day.” 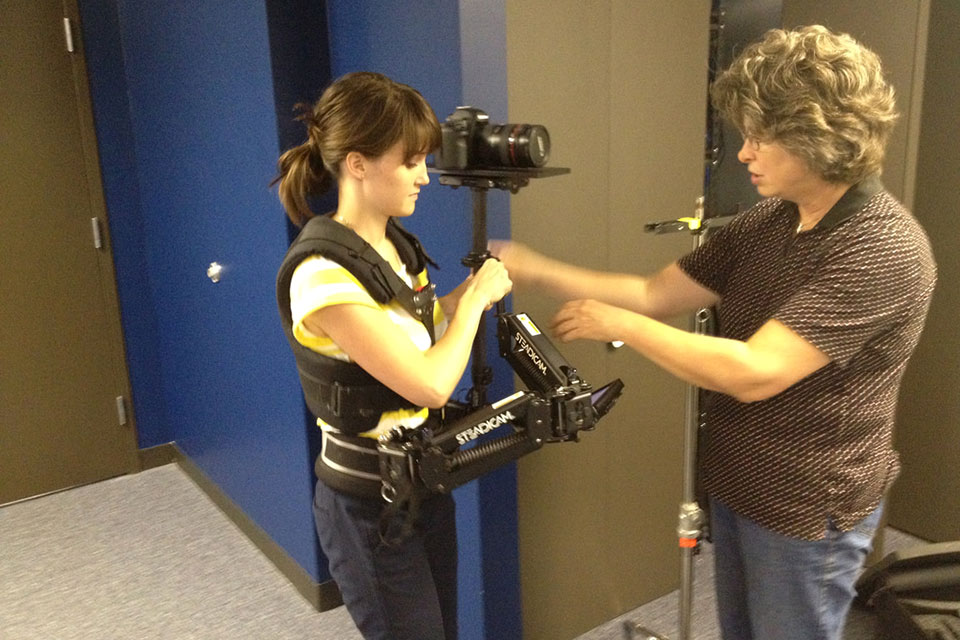 Arthur demonstrating how to operate a Steadicam.

Along the way, Arthur says, most of her fellow crew members (predominantly men at the start) respected the hard work she put in on shoots.

“At the time, the men who were working had spouses going into the workforce as well,” she recalls. “They didn’t want anyone to treat them badly and most of the men on the film sets were conscious of that.”

She remembers a particularly grueling outdoor scene she filmed for the television show “ER” with actor George Clooney on a frigid Chicago winter day. “It was a long walk out of a hotel and around a fountain,” she says.

The equipment she was carrying weighed at least 60 pounds and she was walking backwards to get the shot in one continuous take. “Every other scene that day took one or two takes, but we kept doing this one over and over,” she says. By the end of it the cast and crew were tense and exhausted, but she got the shot. “They did use one of those shots in the episode,” she says—a small triumph.

The real victory, though, came from her peers. “When I climbed on the crew bus at the end of the day, everyone burst into applause,” she says. “After that, I got a lot nicer about criticizing other peoples’ work,” she adds with a smile.

Shows like “ER” and “West Wing” made Steadicam shots a part of their look, and these days it’s all fair game, Arthur says. Working with Steadicams has become less of a specialty and more of a part of the standard repertoire of virtually all cinematographers.

As an instructor at UNCSA, Arthur has been able to see how things have “come full circle.” Women are integral on film sets, students are open-minded and hardworking and she gets to educate film students about her beloved Steadicam.