How to be a filmmaker: 5 tips for success

There is also plenty to be gleaned from studying the paths of filmmakers who’ve been there before. Hartigan, whose films “Morris From America” and “This Is Martin Bonner” have taken top prizes at Sundance Film Festival, reflects on his own path to becoming a successful writer and director and some of the lessons he learned along the way.

How to be a filmmaker in 5 tips:

It starts with determining your own definition of “filmmaker.” For some, it may mean being a screenwriter on a popular television show, for others it may be editing blockbuster features. For Hartigan, it happened as soon as he got to UNCSA.

“I felt like my career started when I got to film school and started making films,” says Hartigan, who was influenced in part by a quote from Academy Award-winning director James Cameron:

“Pick up a camera. Shoot something. No matter how small, no matter how cheesy, no matter whether your friends and your sister star in it. Put your name on it as director. Now you’re a director.”

Pick up a camera. Shoot something. No matter how small, no matter how cheesy, no matter whether your friends and your sister star in it. Put your name on it as director. Now you’re a director.

“That stuck with me,” Hartigan says. Even though he knew some of his student films might never be seen by a wide audience, he felt like a filmmaker the moment he started building his own body of work.

2. Utilize your connections and alumni network

As students collaborate on their own and each others’ films during their time at UNCSA, they also cultivate a network of filmmaking peers that far outlasts the four years spent in film school. That network was essential to some of Hartigan’s earliest opportunities.

After graduation, he hopped the first flight to Los Angeles with his fellow graduates for the School of Filmmaking’s annual senior trip, where new alumni meet and network with professionals in the film business. He bought a one-way ticket.

He spent two weeks crashing on the couch of some older UNCSA alumni and friends, searching for work and a place to live. He landed his first filmmaking job through another alumnus, working as a production assistant on the TV show “World Poker Tour.” “My job was to wait hours for someone to win and then dump confetti on the table,” he recalls, laughing.

3. Find opportunities that advance your goals

He eventually landed a job at a company called ReelSource, where he worked for six years, analyzing and predicting how much money films would make in order to help inform the booking decisions of movie theater companies. He loved the job and the fact that it came with one incredible perk: daytime hours.

The job’s hours gave him the flexibility he needed to advance his own aim of becoming a director by allowing him time to work on his own projects and stay connected daily to the business of filmmaking. 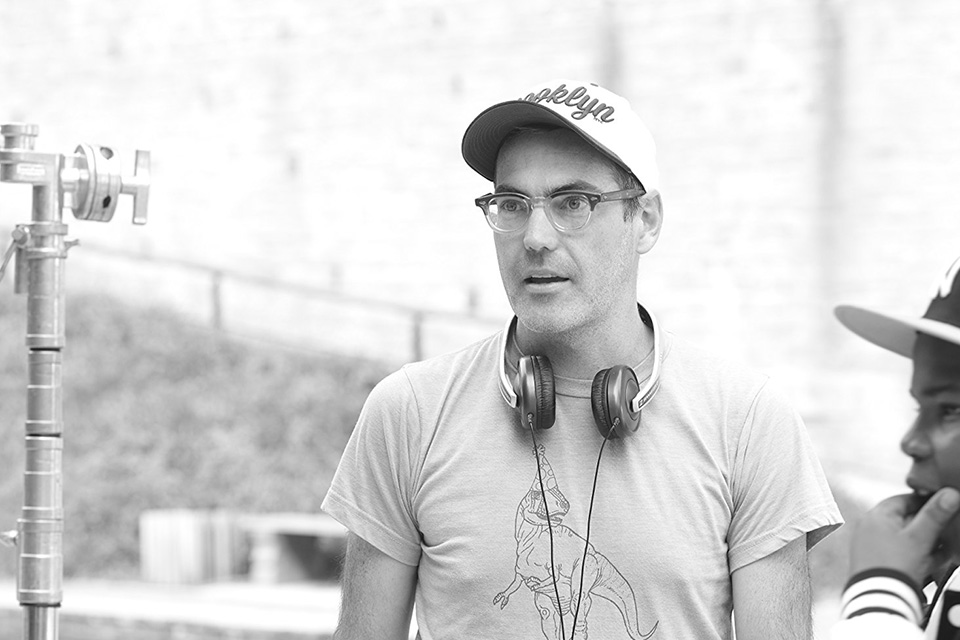 Hartigan on set of his 2016 film, "Morris From America." / Photo: Bettina Keller

Aside from the studio system of TV and film production, there are other “ecosystems,” Hartigan says, where film thrives. He encourages students to explore the festival scene and other filmmaking communities.

He discovered the power of the film festival in 2006, when friend and UNCSA roommate Aaron Katz’s film “Dance Party, USA” (in which Hartigan acted) was submitted and accepted to a festival neither of them knew much about at the time, South by Southwest (SXSW). Until that moment, they did not realize that low- and no-budget films made by budding filmmakers could attract a festival audience.

“That was an eye-opening experience,” Hartigan says.  “There was this whole other ecosystem of movies that existed in their own, significant world—the film festival world.”

5. Be your own best advocate

“No one will ever care about you or your work until you do something to make them care,” Hartigan says. Before “Morris From America” and “This Is Martin Bonner” he made other, less successful films. But instead of being daunted by challenges, he learned from each experience. He learned that he liked directing, that he was good at it and that he could, indeed, make films.

So, if you want to know how to be a filmmaker, start by making films. And if the first thing you make doesn’t ignite a fire, he says, be ready to pick yourself up and start again.

Learn how to be a filmmaker.