D&P students and faculty worked on the "Freak Fight" television pilot during the 2015-16 academic year.

“A freak is anyone who doesn’t fit the norm,” says Jonathan Judge, co-creator and director of “Freak Fight,” a television pilot project about a teenage girl who breaks into a secret battle league to uncover the mysterious circumstances of her father’s disappearance.

The yearlong project certainly did not fit the norm for Wig and Makeup, Costume Design and Costume Technology students in the School of Design & Production who helped to bring the freaks to life. A one-time joint course offering between the two programs, “The Monster Class,” allowed for collaborations on everything, ranging from prosthetics to animatronics.

Are you ready to get your freak on?

Co-director of the Costume department Pam Knourek established a partnership through “Freak Fight” Costume Designer and UNCSA alumna Chris Field, and Judge and co-creator Jeremy Slutskin helped to determine the scale of the project.

“When I first told Pam about ‘Freak Fight,’ we were going to do just one or two outfits,” says Judge. “Of course that grew, just like the show did, from one or two to six.”

UNCSA students and faculty worked on concept design, build and implementation of costumes for Major Malfunction, Mashup, Eggosaurus, Pom Pom, Kid A and Tinker. W.R.I.S.T.Y., described as a bracelet/power gauntlet worn by Kid A, has a mind of its own and is a character in its own right.

When it was time to film the pilot in Los Angeles, two students took a cross-country road trip to deliver the final pieces because the cost to ship them would have exceeded the cost to build them.

The UNCSA team had only three in-person meetings with the full “Freak Fight” team during the year and relied heavily on Google Hangouts to make the coast-to-coast production work.

Watch how the production evolved, from wig design to on-set costume adjustments:

Slutskin initially created design concepts for the freaks in Photoshop, which provided a jumping off point for the students.

“I didn’t think about how people wear these costumes,” says Slutskin, laughing. “Can they fit into them? I designed things that were awesome, but impossible.”

Each character presented a unique set of challenges. “With Major, I learned how to do more servo work and also hair work—how to glue it onto different things,” says Joel Erwin, who graduated from the Wig and Makeup M.F.A. program in 2016.

Major also had two heads—a stunt head and an animatronic head, complete with a camera and baby monitor built in to help the actor see. Wig and Makeup student Jared Smith was responsible for the tiniest of details: controlling the movement of Major’s nose and cheeks to match his breathing.

The Eggo costume was extremely heavy, weighing far more than the actor who wore it. Judge and Slutskin wanted Mashup to be bigger, but when the costume grew in scale, the actor could no longer operate its long arms. 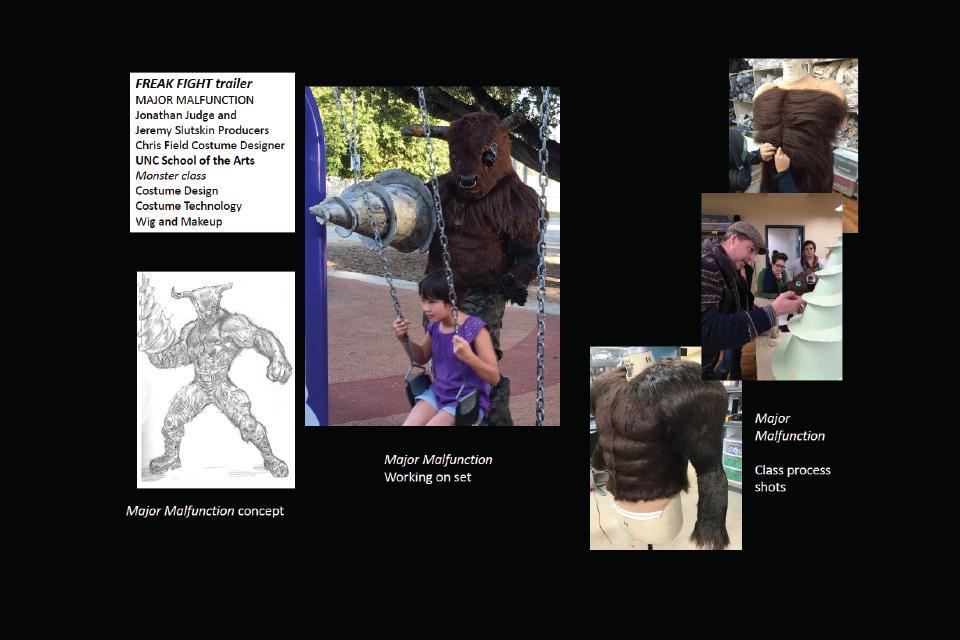 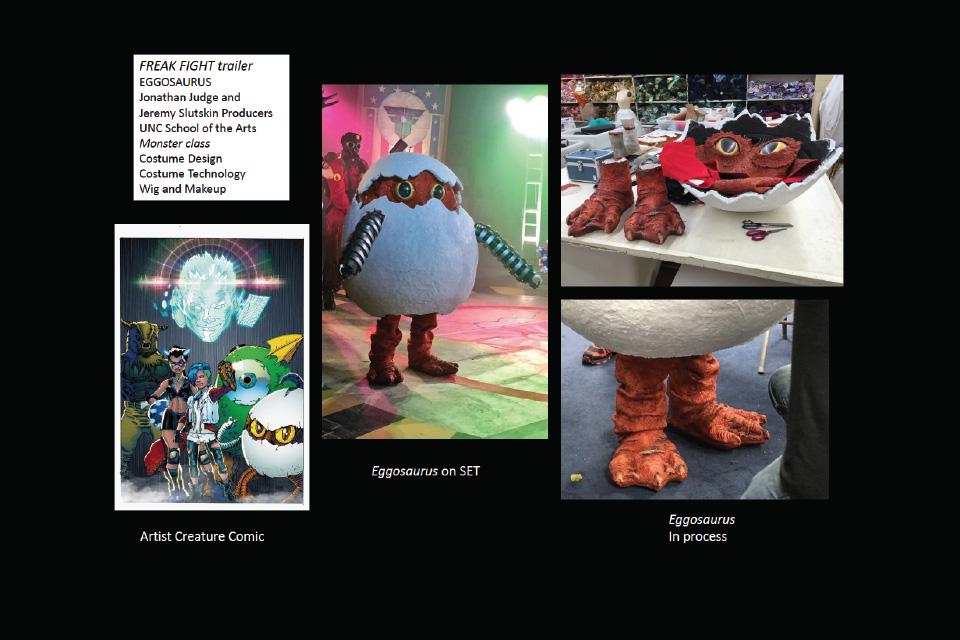 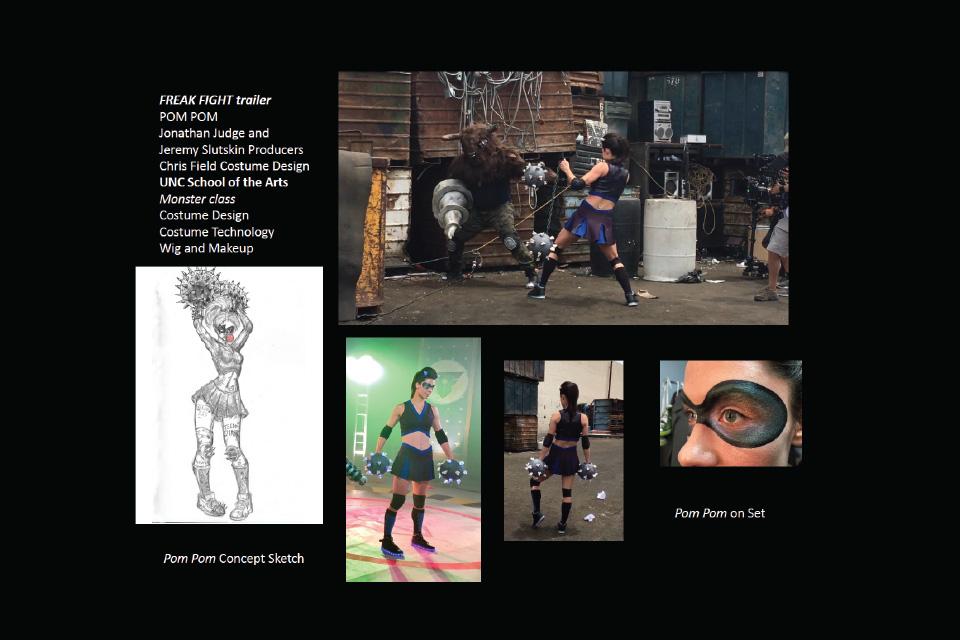 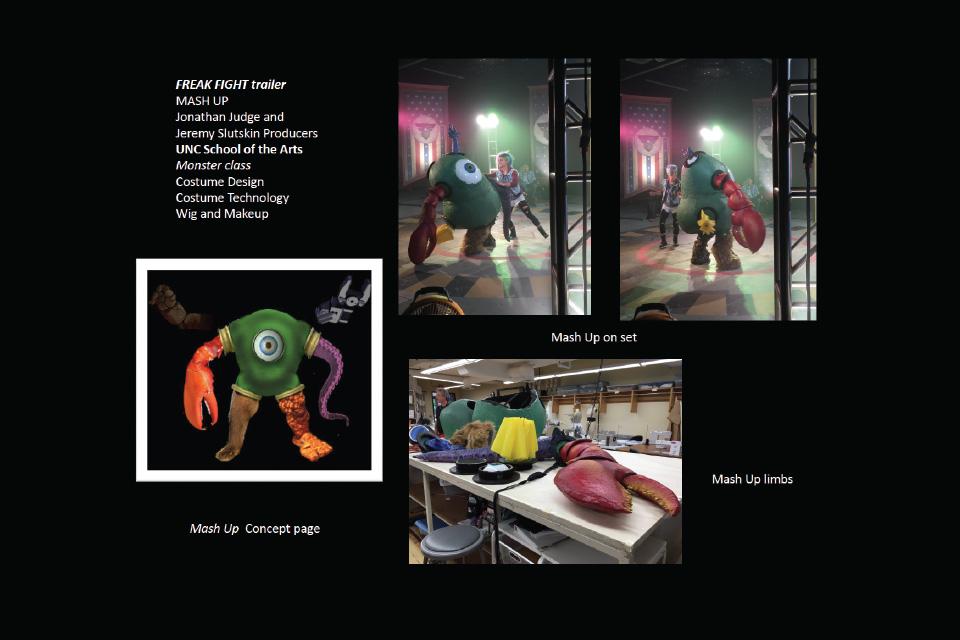 “It’s one thing to make a suit that looks cool on the outside,” says Judge. “But it’s another to make it function and let it handle the beatings we’re putting it through.”

Field was thrilled to have the opportunity to work with students at her alma mater.

“We view the students as professionals and treated them like any other professionals,” she says, adding that students were true collaborators and were relied heavily upon throughout the process. “There’s a lot of learning and growth happening, which is amazing to see.”

Things look a bit less “freaky” in the UNCSA shops now, as the pilot is complete and currently being shopped to potential buyers to develop it for children’s television or for a movie. But keep your eyes peeled–you never know when Kid A or her arch nemesis Pom Pom will reappear.