“We want to hear a human being on stage or in a movie. We want to know what they have to say,” says Robin Christian-McNair, the voice, speech and accent instructor in the UNCSA School of Drama. Voice, she adds, gets to the truth of a character.

Discovering that truth is about more than producing the right sounds, at the right volume, in the right accent. There are acting exercises for all of those components, but finding the character’s voice is a craft that is honed over time. At UNCSA, Christian-McNair teaches actors to do just that.

Why vocal acting exercises are important

Many people think that vocal acting exercises are about making yourself louder or developing the ability to be understood more clearly. But, Christian-McNair says, it’s about more than that. “What’s interesting is that voice work is about finding the truth in your voice.”

What’s interesting is that voice work is about finding the truth in your voice.

In many ways, training your voice for acting is as much about unlearning old habits as much as it is about acquiring new skills. “As we grow up, we start having these physical places of holding,” she says. “Vocal exercises free up those physical and mental patterns.”

Acting exercises that focus on the voice often involve freeing what she refers to as the “first impulse”—the initial, gut reaction you have to a given action or scenario—that we are taught to suppress in everyday life.

Suppressing the impulse to, say, yell at a stranger who cuts you off in line, often involves clamping your jaw, clenching your stomach, adjusting your breath and other physical reactions that happen when you’re attempting to maintain a nice, calm tone.

“In acting, though, we’re not looking at being nice,” Christian-McNair says. “We want to find the truth of what the actor is thinking and feeling. Honest is not always pretty.” Depending on the role an actor is playing, that can be a powerful tool.

“This work has been so valuable for me as an actor,” she adds. “Through breath, I could be much more present and listen to my fellow actors. Actors must train their voices, not to describe the story, but to reveal the story.”

At UNCSA, that process develops and unfolds over a period of years and varies from actor to actor. Christian-McNair largely follows the techniques outlined in “Freeing the Natural Voice” by Kristin Linklater.

“Everything is taught in a very organic way, with the idea that everything I'm receiving, my point of view, what I'm thinking and feeling is communicated truthfully under imaginary circumstances.” she says, “This truthful communication demands intellect, body and voice. This is true for film work as well as the stage.”

To start, students in the School of Drama learn acting exercises that focus on the physical aspects of speaking with methods like the Alexander technique. Actors are learning to release the tension in their belly, tongue and jaw and imagine the movement of the lungs and diaphragm.

Focusing on these different areas helps free the breath, she says, which is what ultimately makes the sounds of the voice. Although not necessarily emotional every time, voice work can be very a vulnerable process for actors.

“You are essentially rewiring your nervous system,” Christian-McNair says. “It can feel taboo to release that holding pattern you’ve had for so long. I am interested in helping students free their voices and be the best actors they can be.”

Applying what you learn

After learning to release these areas, students begin to rebuild with vocal exercises that hone strength and resonance. “At this point, we’re looking at resonators,” she says. “The holes and cavities in your head that can be so revealing of a person’s voice.”

By their third year, students begin bringing their voice and acting exercises together, applying their work to accents and works by Shakespeare. Class activities involve at least one day where students choose an accent in class and only speak in that accent (which might account for any unexplained influx of British accents in the dining hall on any given day). 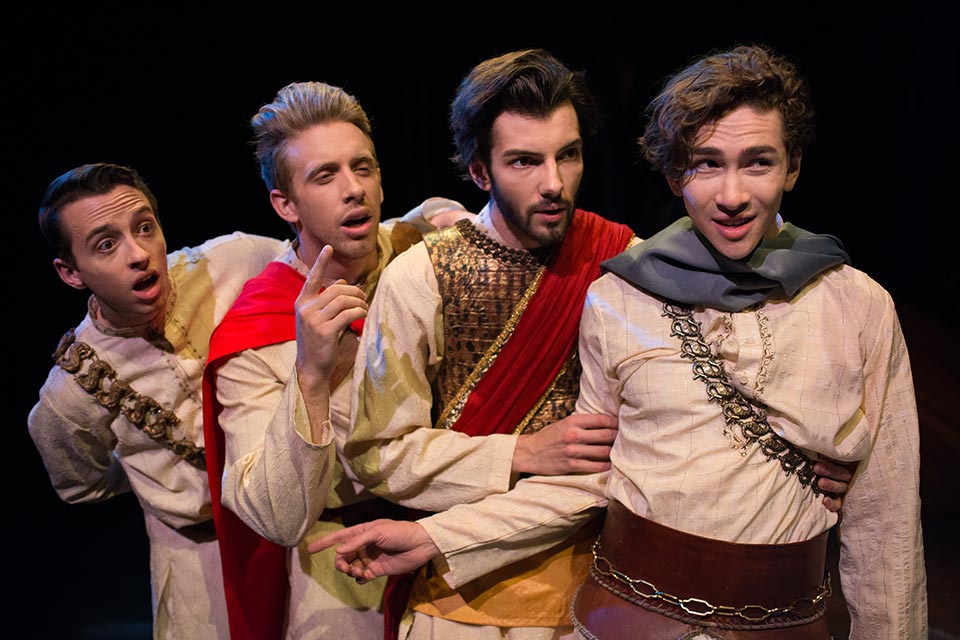 Performing works by Shakespeare help drama students to apply their vocal work. / Photo of a 2016 production of "Pericles" by Peter Mueller.

Finally, fourth-year students’ work culminates in each actor building and leading a 20-minute vocal warm-up for his or her peers. This helps them learn how to lead themselves once they hit the professional stage.

Getting started on your own

For aspiring actors or anyone interested in voice work or vocal acting exercises, Christian-McNair has a few suggestions. Pick up a copy of Linklater’s work or attend a local workshop. Or, if you’re up for travel, visit Linklater herself at her Voice Centre in Orkney, Scotland.

For potential Drama students, she recommends sitting in on a class at UNCSA. “Always keep in mind whether it speaks to you or not,” she says. “Voice work has made me a better, more open actor. It’s such beautiful work and it brought me back to who I truly am.”

Find truth in your voice.