Eric Rimes is the advance electrician for the national tour of "Wicked."

When asked recently how he got into lighting technology, Eric Rimes had what he called “a joke answer.” As a fourth grader in Gainesville, Florida, where he grew up, Rimes auditioned for a part in his school’s Christmas show. “When the tryouts were over, they told me to do lights,” he said.

What followed has been anything but a joke:

Rimes would go on to light many a school and church production during his youth. He enjoyed the work and did so well at it that he ultimately decided to pursue a career in lighting technology. He has excelled as both a practitioner and as a teacher.

Rimes recently received the 2019 University of North Carolina Board of Governors Award for Teaching Excellence. He is a professor of lighting technology in the School of Design & Production at UNCSA, where he began working in 2003.

Bringing industry experience to the classroom

Before his UNCSA appointment, Rimes held electrician positions with numerous touring productions, from “Aida” to “Beauty and the Beast.” While at UNCSA, he has kept working for such regional companies as Carolina Ballet and Piedmont Opera of Winston-Salem. He’s also the advance electrician for the national tours of “Wicked” and “The Phantom of the Opera.”

Not surprisingly, then, Rimes has learned much outside of the classroom, and it only serves to enhance what he teaches inside of it.

“I do try to bring my professional work into the classroom, in terms of talking to students about my experiences,” he said. “I tell them a story of something I have done, or had an experience with—which becomes an example of the lecture topic we’re talking about.”

Rimes stressed that lighting technology continues to undergo disruptive changes since he began working in the 1990s. LEDs, for example, have gained a strong foothold in the last few years because they produce more light with less energy, and they also feature many more parameters that can be controlled from a computer-directed lighting console.

About 20 years ago, Rimes remembers working with a console that could control 156 things; the console used during a recent tour of “Phantom” controlled 11,000. Similar advances await Rimes’ students when they enter the workforce, and his approach to teaching reflects that.

“One of the central tenets of my teaching is to prepare students to learn new things as they come along,” Rimes said. “When they graduate and they move to their first job, they find out the things that they really need to know for that job. My teaching prepares them to do those things, whatever it is.”

Casey Taylor, a lighting technology student of Rimes’ who graduated this spring, echoed this sentiment.

“I’m leaving UNCSA with the knowledge to tackle nearly any position in my field, and the courage and resources to solve the unknown and complex issues that I’ll face along the way,” he said. “Eric doesn’t just teach stage electrics; he teaches resilience, compassion, integrity and patience.”

Rimes’ work experience has also yielded a long list of industry contacts, many of whom offer guest instruction in his classes. The contacts also connect with students where they’re working, namely in theaters on the road.

One of Rimes’ former students, Robert Virzera ’10, whose work credits include head electrician for a tour of “Phantom,” said that because Rimes is an advance electrician for a touring production of “Wicked,” he was able to take Virzera and his classmates to cities where that show was playing.

“We had the opportunity to talk with other professionals in our industry and to see how things work in the real world,” Virzera said.

For Rimes, technical knowhow is but one ingredient for finding success in the lighting technology field. His students learn that other qualities are likely even more important: a willingness to learn something new; being pleasant to work with; being able to work hard and long (putting in 11 hours a day, six days a week is typical); and an ability to work with people, not against them.

Anyone who doubts the importance of these qualities should look at Virzera’s work history.

“After college, I went right on the road and haven’t left,” he said. 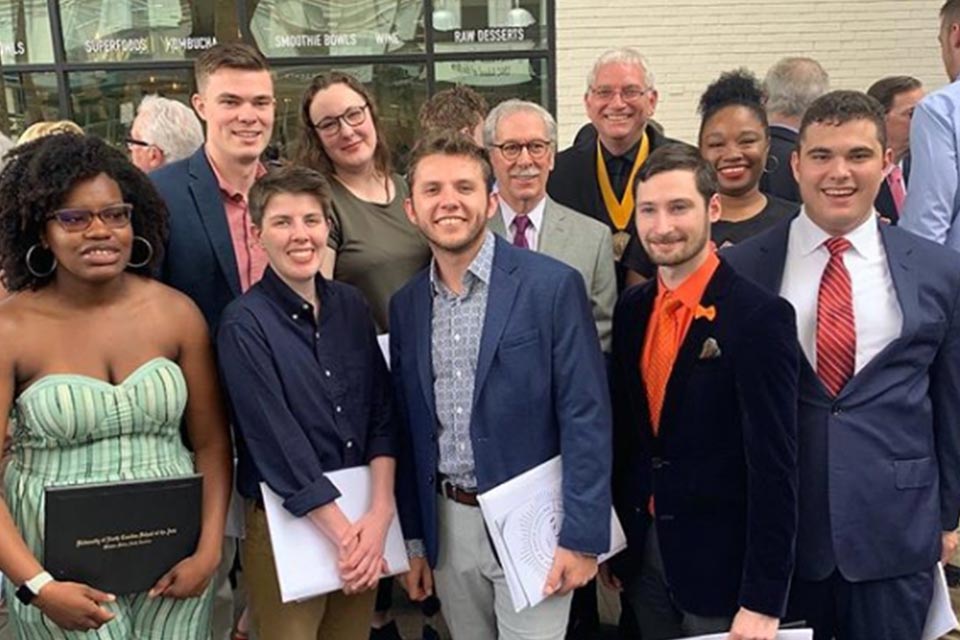 Eric Rimes (back) with 2019 Lighting graduates after Commencement.

Before Rimes landed his current position at UNCSA, he toured as Pyrotechnician and an electrician on “Martin Guerre,” a musical. When the show closed in 2000, “I thought I was going to take some time off,” Rimes said. “The next day I got a phone call from the Production Electrician of ‘Martin Guerre’ asking me to go out on ‘Ragtime.’”

“It’s extremely important to remember you get jobs based on reputation as much as you do your rèsumè,” he said.

Rimes’ students are continually reminded of this philosophy, not only in the example he sets outside the classroom but also in his lists, which he frequently uses as teaching aids. One list, which Rimes pasted recently on a classroom wall for the benefit of Taylor and his classmates, includes these points: “Music can be good for work, but you shouldn’t have to yell over it” and “Gravity should be your friend.”

There’s also a Top Ten list for troubleshooting. Point 2: “Check the obvious. Is it plugged in, is it turned on, is it getting power?” Point 6: “Keep accurate notes for next time. What did you do” to solve the problem? Point 7: “If you think you have found a solution, test it.” Point 9: “When in doubt, call for help,” which means call Professor Rimes. Taylor is sure that he means it.

“His commitment to us isn’t for four years,” he said. “He makes sure that we know it’s for life.”