Released in February 2019, “Black Myself” earned the Grammy nomination as Best American Roots Song. It was written by Kiah and recorded by Our Native Daughters, a quartet formed by the Triad’s Rhiannon Giddons. Kiah was nominated alongside I’m With Her, a trio that performed at the Stevens Center for “UNCSA Presents” in February 2019. I’m With Her was awarded the Grammy for “Call My Name” on Jan. 26, 2020. 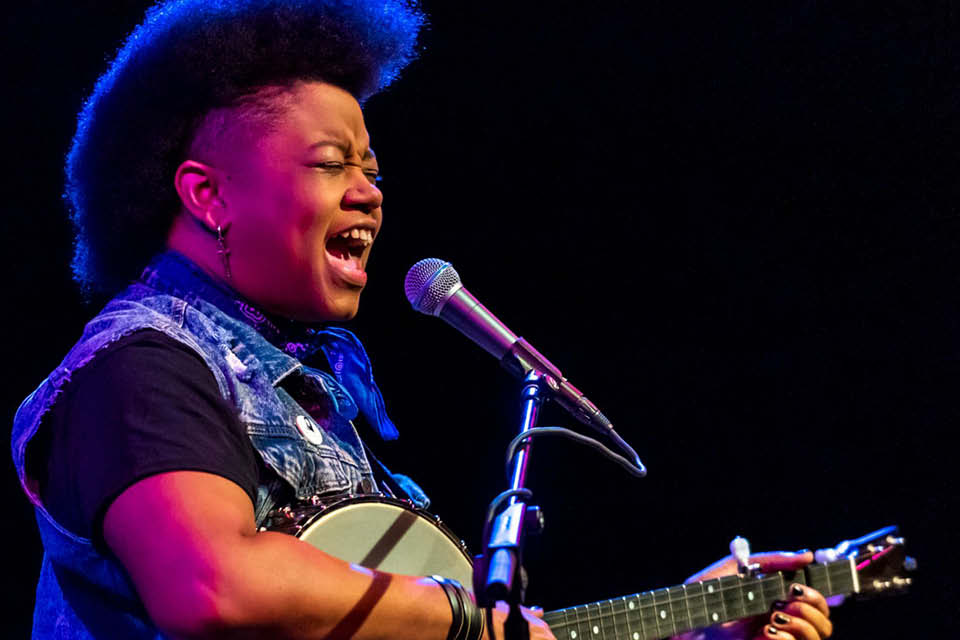 “We’re thrilled to provide our Triad-area audience with the opportunity to experience stand-out artists like Amythyst Kiah and I’m With Her,” said Wiley Hausam, who curates the “UNCSA Presents” series. “This season of the American Music Series has offered a diverse, all-female roster of artists, and Amythyst Kiah adds something very special to the mix. I believe our audience will look back in a few years and say they saw the next great stars of American roots music right here in downtown Winston-Salem.”

Naming Kiah to its list of 20 must-see shows at Nashville’s AmericanaFest in September 2019, Rolling Stone said she is “one of roots music’s most exciting emerging talents, blending a deep knowledge of old-time music with sensibilities spanning classic country to contemporary R&B.”

She was the only solo musician on the multistage showcase GlobalFest, held in New York’s Times Square a year ago. The New York Times called it a standout performance and noted that her voice “can change on a dime from brushed steel to melted toffee that commands attention.”

The American Music Series is part of “UNCSA Presents,” an initiative offering entertainment at the Stevens Center by professional touring artists. The 2019-20 season includes the pub concert experience Choir of Man on March 3 and the national Broadway tour of “The Color Purple” on May 13.

Born in Chattanooga and based in Johnson City, Tennessee, Amythyst Kiah’s commanding stage presence is matched by her raw and powerful vocals—a deeply moving, hypnotic sound that stirs echoes of a distant and restless past. Accompanied interchangeably with banjo, acoustic guitar, or a full band, her eclectic influences span decades, finding inspiration in old-time music, alternative rock, folk, country and blues.

Our Native Daughters, her recent collaboration with Rhiannon Giddens, Leyla McCalla and Allison Russell (Birds of Chicago), has delivered a full-length album produced by Rhiannon Giddens and Dirk Powell: “Songs of Our Native Daughters” (out now on Smithsonian Folkways). NPR described the opening track, “Black Myself,” written by Kiah, as “the simmering defiance of self-respect in the face of racism.” The supergroup hit the road in July 2019 with a series of special dates that included performances at Washington, D.C.’s Smithsonian Museum of African American History & Culture as well as Newport Folk Festival. The group was nominated for Duo/Group of the Year at the 2019 Americana Honors & Awards.

Provocative and fierce, Kiah demonstrates an ability to cross boundaries that is groundbreaking and simply unforgettable. Her stylistic range will be on full display in her next full-length album expected later this year.