UNCSA presents an online screening of narrative, documentary and animated films produced by graduating seniors in the School of Filmmaking, beginning at 7 p.m. on Friday, May 8, and continuing through Sunday, May 10.

“These are our capstone projects for the 2019-20 academic year,” said Interim Film Dean Henry Grillo. “Some of them have been in process throughout the students’ four years in the School of Filmmaking. This year, due to COVID-19 pandemic, students were working remotely – without the professional caliber equipment they use on campus – to finish as much as they could.  Many of these films are still works in progress, but we’re very proud of the way our graduating seniors rose to the challenge, and we’re pleased to offer their work to our community.”

Two of the films, “échappé” and “Reality is Constructed,” feature dancers and collaborative choreography from the School of Dance.

“Our students take full advantage of the diversity of arts disciplines found at UNCSA,” Grillo said. “No other film school in the country offers access to conservatory-level dancers, musicians, actors, designers and technicians. It’s what makes us unique.” 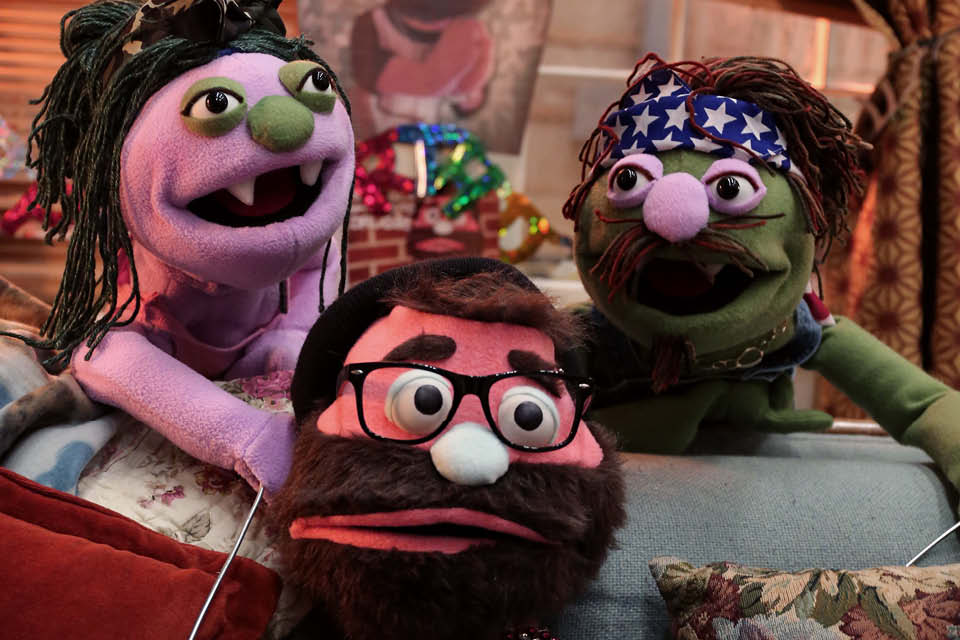 "Hallswallow Hollow" is among the films by fourth-year students that will be screened online May 8-10.

With information available at press time, the films to be screened include:

“Cost of a Stranger”

A pregnant sex worker must make a decision when her madam pressures her to get an abortion. Narrative film directed by Elizabeth Schwab; written by Schwab and James Hashimoto; produced by Jacob Fleming Briguglio and Taylor Davis; cinematography by Hashimoto; production design by Grant West; editing and sound design by Kevin Mackler; music by Jui-Fan Lin; costume design by Rachel Nicole Anderson; wig and makeup design by Whitney Cline.

A young woman recounts her difficulty coping with painful inner emotions through a series of memories in which her feelings are represented by different forms of water. Animation directed, written and animated by Victoria Cruell; produced by Kayana Waller; sound design by Maddison Whitfield; music by Alexandra Franco Zorro.

When faced with the opportunity for a solo performance, an aging dancer must question whether her moral compass and personal integrity are important enough to stand up to a choreographer’s unwanted sexual advances. Dance narrative film directed by Rebecca Walters; written by Walters and Brandon Rieff; produced by Rieff and Julia Lofton Walpole; cinematography by Rachel Schattle; production design by Shelby Grzech; editing and sound design by Joe Linford; music by Meng Tung Lee; choreography by Dance alumnus Gary Taylor and Isabel Newport; costume design by Rachel Nicole Anderson; wig and makeup design by Brittan Furr.

An adolescent vampire in the 1950s must attempt to suppress her thirst for blood if she is to have a normal relationship with her boyfriend. Narrative film directed by Joey Moore; written by Edward Taveras; produced by Taylor Davis; cinematography by Jack Salmon; production design by Madison Harvey; editing by Graham Swanston; sound design by Langston Styles; music by Scott Rodeheaver; costume design by Dale Jones; wig and makeup design by Joan Paluska.

An animated documentary that explores the relationship between humanity and the natural world. Directed by Echo Wilson; produced by Nick Bailey; animated by Wilson, Mckayla Singleton, Abby Davenport and Kamryn Szeliga; editing and sound design by Jacob Boyle; music by Alexandra Franco Zorro.

“Lost In the Red Snow”

In 1970s Kashmir, a child soldier who is injured delivering a package for his handler finds himself under the roof of a man and woman who care for him as their own. When pressures mount against the boy to return to the fight, the threat of involving the family in the struggle causes him to question his role in the conflict. Narrative film directed and written by Raunak Kapoor; produced by Jacob Fleming Briguglio and Billy Costello; cinematography by Tess Hasbrouck; production design by Noah McCormick; editing by Gage Welch; sound design by Welch and Will Smith; music by Ryan Mulder; costume design by Lizzie Lovett; wig and makeup design by Spencer DiBiase. 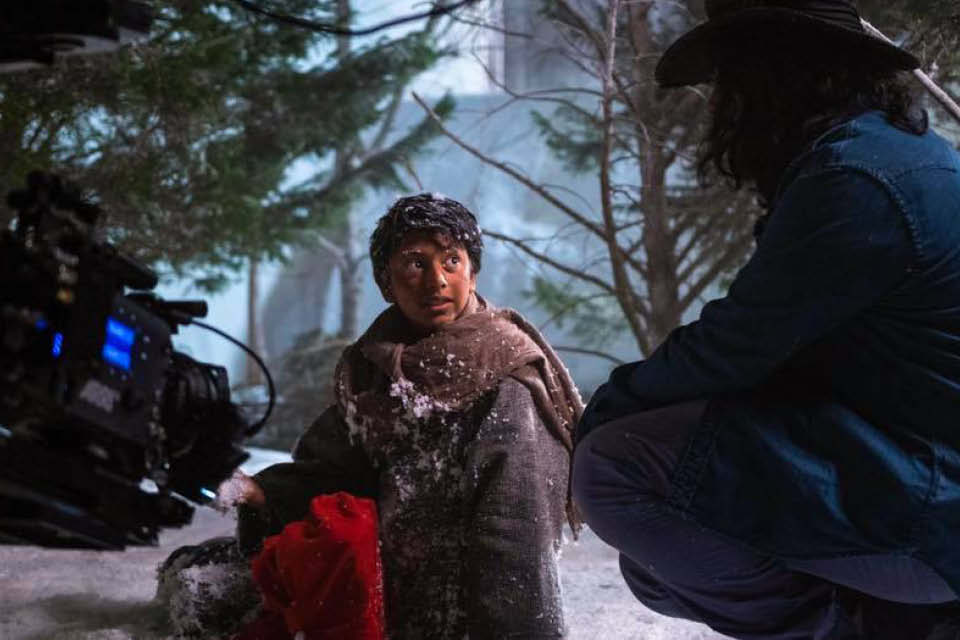 "Lost In the Red Snow" is among the films by graduating seniors that will be offered online May 8-10. / Photo: Hailey Cheyenne Port

After years of transitioning in front of a camera, Aydian Dowling discusses how allowing his transition to be visible via YouTube has helped the trans community as a whole grow in pride and Allyship. Documentary directed by Ash Malone; produced by Epiphany James, Ellie Emfinger and Erin Gallagher; cinematography by Ian Price; editing by Ash Malone.

How can we really know anything outside of our own subjective experience? This film addresses the anxieties and confusion that come with the unknown factors of our existence. Kinetic movement and abstract textural experimentation create a visceral environment that challenges our preconceived notions of reality and our human experience. An experimental dance film directed by Alexander Cantenanzzo and Aidan Millroy; written by Cantenanzzo; produced by Benjamin Mailloux and Gillian M. Skipper; cinematography by Clark Ivers; production design by Cam Brone-Hamer; editing by Cantenanzzo; music by James William Stamm; choreography and dance by Catheryn Clifford and Savannah Jade Dobbs; costume design by Caroline Knight; wig and makeup design by Alex Howard.

Best friends Kurt and Carter find out that living together may not be as easy as they thought when their competing lifestyles begin to crash. After a huge arguement, Carter wakes up to find his gravity has shifted to the wall. He has gone sideways. Narrative film directed by Daniel Robert Smith; written by Ben Trauner; produced by Thatcher Johnson-Welden; cinematography by John Curtis; production design by Jordan W. Sayman; visual effects by Will Smith; editing by Nikos Spiridakis; sound design by Spiridakis and Micah Godsey; music by Michael Gaffney; costume design by Lizzie Lovett; wig and makeup design by Nic See.

In a desperate attempt to maintain sobriety, a recovering young addict grapples with the need to leave his loved ones behind. A narrative film directed by Patricio Camára Rubio; written by Clayton Bloodworth and Tanner Poff; produced by Sam Varriale; cinematography by Calyn Heller; production design by Colin Palmer; editing by Mack Wolf; sound design by Will Smith; music by James William Stamm; costume design by Andrew Walsh; wig and makeup design by Alex Howard.

Tasked with raising her younger siblings, a teenage girl must decide whether to pursue a social life or continue as a caretaker in the wake of her mother’s addiction. Narrative film directed by Cameron McCormack; written by Ashley Miller; produced by Emily Drake Padgett and Jordan T. Moore; cinematography by Mitchell Brinker; production design by Meghan Cowen; editing and sound design by Eric Randolph; music by Hudson Waldrop; costume design by Olivia Alicandri; wig and makeup design by Saoirse Keegan.