Dance alumna Helen Simoneau, founder and artistic director of Helen Simoneau Danse, has been awarded $15,000 Arts Projects Grant from the National Endowment for the Arts (NEA) and a Guggenheim Fellowship.  Named by Dance Magazine as a “choreographer on the rise,” Simoneau received her B.F.A. in 2002 and her high school diploma in 1998. She frequently serves as guest artist in the School of Dance, and is a member of the UNCSA Board of Visitors.

The NEA grant will support a new choreographic work, “Delicate Power.” It is  among the more than 1,100 projects across America totaling nearly $27 million that were funded during this second round of Grants for Arts Projects for fiscal year 2021.

“As the country and the arts sector begin to imagine returning to a post-pandemic world, the National Endowment for the Arts is proud to announce funding that will help arts organizations such as Helen Simoneau Danse reengage fully with partners and audiences,” said NEA Acting Chairman Ann Eilers. “Although the arts have sustained many during the pandemic, the chance to gather with one another and share arts experiences is its own necessity and pleasure.” 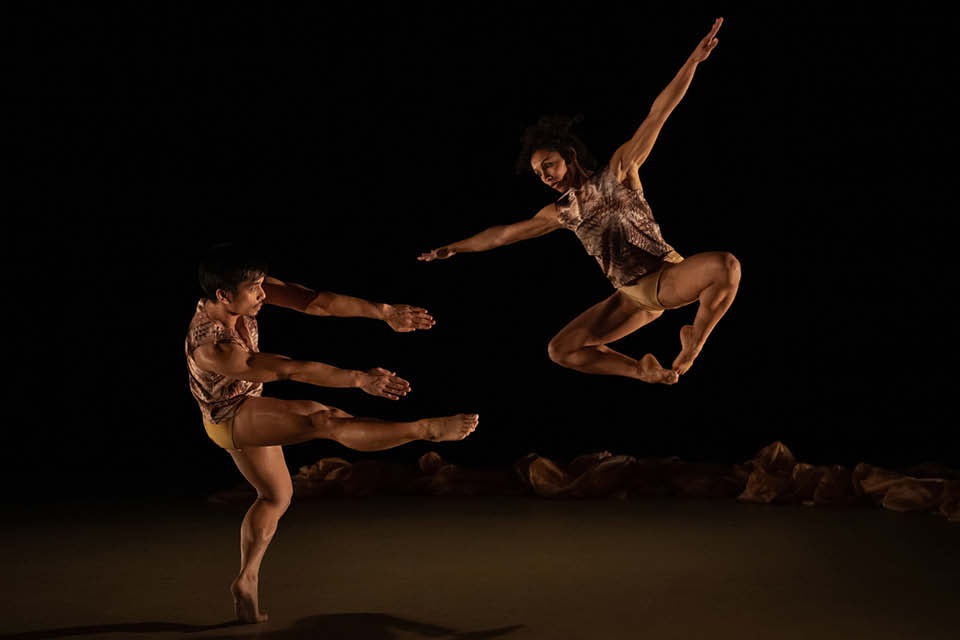 "Darling" was presented in 2020 by Helen Simoneau Danse at Hanesbrands Theater in Winston-Salem. / Photo: Peter Mueller

“It is so encouraging to receive this national recognition and support for my next dance work,” said Simoneau. “HSD is so excited to get back into the studio to create new work to share with our audiences. Thank you to the NEA for helping us reemerge from this pandemic!”

For the Guggenheim Fellowship, Simoneau was chosen from nearly 3,000 candidates through a rigorous peer-review process. She is among a diverse group of 184 artists, writers, scholars, and scientists in this year's fellowship class. Created in 1925 by Senator Simon and Olga Guggenheim in memory of their son John Simon Guggenheim, the Foundation has offered fellowships to exceptional individuals in pursuit of scholarship in any field of knowledge and creation in any art form, under the freest possible conditions.

"I am thrilled to announce this new group of Guggenheim Fellows," said Edward Hirsch, president of the Guggenheim Foundation, "especially since this has been a devastating year in so many ways. A Guggenheim Fellowship has always been meaningful, but this year we know it will be a lifeline for many of the new Fellows at a time of great hardship, a survival tool as well as a creative one. The work supported by the Fellowship will help us understand more deeply what we are enduring individually and collectively, and it is an honor for the Foundation to help the Fellows do what they were meant to do."

"This is a huge recognition of my cumulative career, and it feels incredible," said Simoneau. "I am so honored and grateful. My gratitude goes out to all my past and present collaborators, board members, and supporters."

Choreographer Helen Simoneau is originally from Rimouski, Québec, Canada. In 2009, she founded Helen Simoneau Danse, a contemporary dance company is based in Winston-Salem with a presence in both North Carolina and New York City.

Simoneau’s commissions include The Juilliard School, Oregon Ballet Theatre, BalletX, the American Dance Festival, UNCSA, The Yard, Springboard Danse Montréal, The Ailey School, the University of the Arts in Pennsylvania, and the Swiss International Coaching Project (SiWiC) in Zurich.

Simoneau was a resident artist at Baryshnikov Arts Center at New York University’s (NYU) Tisch School of the Arts, Bates Dance Festival, New York Dance Lab, the National Choreographic Center in Akron and the University of Buffalo via the Creative Arts Initiative. She has received fellowships from The NYU Center for Ballet and the Arts, the Bogliasco Foundation, and twice from the North Carolina Arts Council.

Her work has been presented nationally and internationally at The Guggenheim Museum and Joyce SoHoin New York City;  Dance Place in Washington, D.C; Jacob’s Pillow Inside/Out in Massachusetts; Tangente in Montréal; the Aoyama Round Theatre in Tokyo; the L.I.G. Art Hall Busan in South Korea;  PACT-Zollverein in Essen, Germany;  Athens International Dance Festival in Greece;  and the Shanghai Dance Festival in  China. Simoneau was awarded first place for choreography at the Internationales Solo-Tanz-Theater Festival in Stuttgart, Germany.

She was recently a fellow at Ailey’s New Directions Choreography Lab and is the current choreography fellow at New York City Center.

In addition to an annual performance in North Carolina, Helen Simoneau Danse has led outreach programs, collaborated with local organizations like Aperture Cinema, Peppercorn Theater, SECCA, Wherehouse Art Hotel, Ramkat, Music Carolina, and Phuzz Phest. In 2016 and 2017, the company produced a downtown dance festival supporting the work of local, regional, and national artists, emphasizing the necessity for exchange between artists from different areas. Following this, HSD partnered with local dance artists and the Second Harvest Food Bank to present Food for Thought, a platform to see thoughtfully curated performance and collect donations for the local food bank. In 2019, Simoneau partnered with the Wake Forest  Innovation Quarter and Incendiary Brewery to present a new performance series called Moving Landmarks. Its inaugural event presented the works of four female-choreographers at the Coal Pit at the Bailey Power Plant.