Tanase Popa: Man behind the curtain

A 2006 B.F.A. graduate of the School of Design and Production in stage management, Tanase Popa is a Peabody and AFI award recipient as well as a ﬁve-time Emmy- and Golden Globe-nominated television and film producer.

Now an imperative cog in acclaimed producer Ryan Murphy’s film and television empire — which has spawned network TV’s “Glee,” cable TV’s “Pose,” the “American Horror Story” anthology series and ﬁlms like Netﬂix’s “The Prom” — he has quickly risen through the ranks, building his career on a foundation that was laid at UNCSA nearly two decades ago.

“Man behind the curtain” is a little overworn, but it’s applicable, not merely for the backstage quality of Popa’s creative partnerships, but also for his tendency to avoid press. With Murphy, he has played a vital role in seeking out talent for a wide array of projects. In 2019 alone, Popa personally worked with the Emmy-winning mogul to bring on 78 directors for 78 episodes of television. He also helped create and curate the company’s Half Initiative, which is focused on mentoring underrepresented voices. For “Pose,” he has helped extend opportunities to more than 300 transgender men and women hired as cast and crew on the series thus far. All of it while remaining out of the spotlight.

“I don’t want to be the one doing it. I want to be the one behind the scenes putting it together,” Popa says. “I never looked at myself as someone who was creative in the sense that I need to write or be a director to put the pieces together that way. I always loved ﬁnding the right people for the right project.”

I don’t want to be the one doing it. I want to be the one behind the scenes putting it together. I never looked at myself as someone who was creative in the sense that I need to write or be a director to put the pieces together that way. I always loved ﬁnding the right people for the right project.

Before Popa’s road to Hollywood ran through UNCSA, he was an immigrant in Florida, already with an incredible story to tell. He didn’t meet his father, who had spent Popa’s youth traveling the world trying to get the family out of Communist Romania, until he was ﬁve years old. They ultimately settled in Jacksonville, where Popa grew up and where he came out as gay at a young age. As a survival instinct, he says he sought out the theater community. “I needed to do something so I could protect myself and be around other people who might be gay,” he says. “Theater became a family and a place I could focus and not get in trouble.”

He started out studying acting in middle and high school, but admits he was not very good at it. During his junior year, a connection to the Florida State Thespian Festival opened the door for Popa to ﬁnd his footing and zero in on a potential career when he organized and executed the festival for 6,500 students. That led to an offer to stage manage a community theater production of Michael Frayn’s “Noises Off,” notorious for its practical complexities. “I said yes, not really knowing what a stage manager was,” Popa admits. “I loved it and loved the logistics of it. That’s when I was like, ‘Maybe I could pursue this as a career.’ I started thinking of it as a business.”

After that first ﬂurry, as he headed into his senior year of high school, Popa learned about the then-North Carolina School of the Arts. He set his sights on the School of Design and Production with a stage management focus, but those early passions didn’t fade. Popa was always drawn to the craft of acting, so he audited directing courses taught by former dean of the School of Drama Gerald Freedman to better understand how to work with actors. He even added to his arsenal of resources by taking on foreign-language classes like Italian and German.

“Tanase always presented himself authentically. If he didn’t understand something, he wouldn’t pretend he did,” says Pamela Knourek, co-director of the UNCSA costume design and technology department, who was a mentor to Popa and also helped him secure a life-changing internship at the Santa Fe Opera, in scenic northern New Mexico. “He would ask the questions so he would understand it. If he was supposed to sweep the floor, he was going to sweep the floor the best he could. That’s a wonderful thing to see in somebody who can stay in the present and see how this could help them later. You could see that in Tanase early.”

Popa was moving at such a clip that he completed nearly all of the credits required for his B.F.A. before his senior year. During that last year, he spent some time in New York as an intern at Alvin Ailey American Dance Theater, working in revered dancer Judith Jamison’s ofﬁce. (That particular stint would come in handy years later, when Murphy would be scouting New York locations for a dance studio for “Pose.” Popa knew just the place.)

By the time Popa returned to New York after graduating college to begin work on the Broadway production of “Sweeney Todd: The Demon Barber of Fleet Street,” it would be fair to say he had fully arrived.

“I kind of got fast-tracked to being a union company manager within nine months,” Popa recalls of his time in the Big Apple. “I was an intern, and then a production assistant, and then an assistant to a general manager, and an apprentice company manager.”

His early adulthood begins to read like a list of milestone markers ﬂying by. At 21 years of age, fresh out of college, Popa was already moving through the two-year apprenticeship program of the Association of Theatrical Press Agents and Managers (ATPAM) with folks 10 or 20 years older than him. Next came touring experience, as he managed “Wicked” in San Francisco for two years. Before long, an inevitable bridge to the film business materialized: For three years, Popa worked as a senior assistant to Darla Anderson and Lee Unkrich at Pixar Animation Studios in Emeryville California. But he didn’t see a lot of opportunity for growth, given the extended timeline for animation projects. He needed more hustle and bustle.

Popa eventually met with one of the producers in Ryan Murphy Productions, who saw potential for the eager recruit. Not unlike the move from “Wicked” company manager to assistant at Pixar, Popa would be taking a step back to join Murphy’s team, but it was one he was willing to take in order to go forward. So he packed up and moved to Los Angeles. Soon, a professional split between Murphy and an executive producer led Popa to a fork in the road. He had not worked directly with Murphy yet, but he wasn’t going to miss his shot.

“I ended up emailing Ryan and said, ‘We haven’t formally met, but I’ve been in the ofﬁce and I know you’ve heard of me from other producers and writers,” Popa recalls. “The reason I left my previous job was to come work with you and be a part of the cultural impact that you make.’ He responded really quickly and said, ‘I want that, too. Let’s set up a time to talk and make that happen.’” 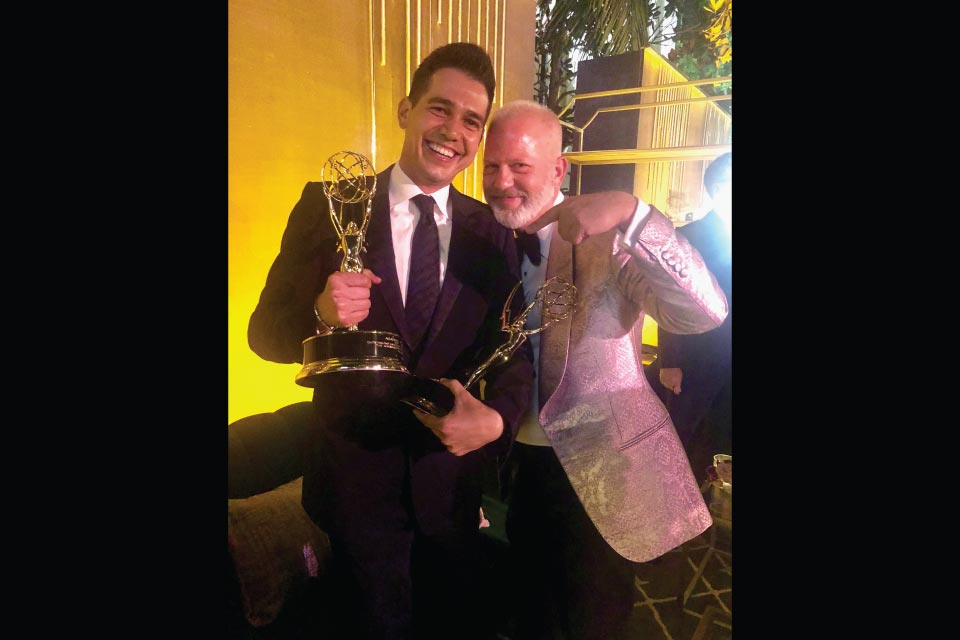 Popa and Ryan Murphy celebrate the success of “The Assassination of Gianni Versace: American Crime Story” at the 2018 Emmy Awards.

At that point Popa was working on FOX’s “Glee.” Murphy then brought him onto a massive undertaking for FX, “The People v. O.J. Simpson: American Crime Story.” Unsurprisingly, as soon as an opportunity to prove his value showed itself, Popa was on the spot.

The miniseries was to be a 10-episode dramatization of the 1995 Simpson murder case. The use of “playback,” such as news programs of the era that would need to appear on television sets in different scenes, was a crucial element of the production. It would just be green screen on the set, ﬁlled in later with visual effects, but the context was often important for the actors, so someone had to keep track of it. Popa volunteered to lead the team in breaking down the scripts accordingly. He had already gotten a jump on it, in fact.

“We broke down two scripts with an entire team in 45 minutes, from something that nobody knew how to address, and it was just putting on my stage manager hat,” Popa says. “After that, Ryan just kind of found me invaluable and I just grew through the company really fast.” It’s an indispensable quality that Knourek says she recognized way back in Popa’s UNCSA years.

“Sometimes you feel like there are some people who do their job like they are psychic,” she says. “To be able to know to ﬁnd the answer before the question is ever asked; I think that’s just intuitive within him.”

When we talked, Popa was ﬁnishing the third and last season of “Pose” in New York. Working during COVID-19 has been a new challenge, but one he and his team have been able to adjust to given how quickly the ﬁlm and television industry adapted. Popa is in a unique position to get a bird’s-eye view of industry standards, as he works on a variety of Murphy productions for different studios, from Netﬂix to Disney.

The biggest challenge, Popa says, might be the creative one. The production environment today is quite clinical, so for a show that is so much about family and community, it’s been particularly hard for the actors to ﬁnd their zones, he explains. But Popa is trying to think on his feet, pushing for intimacy where possible so that the actors can still feel creative without things feeling stiff. Most importantly, he continues to strive for opportunities for inclusivity in front of and behind the camera, and his hustle does not go unnoticed. 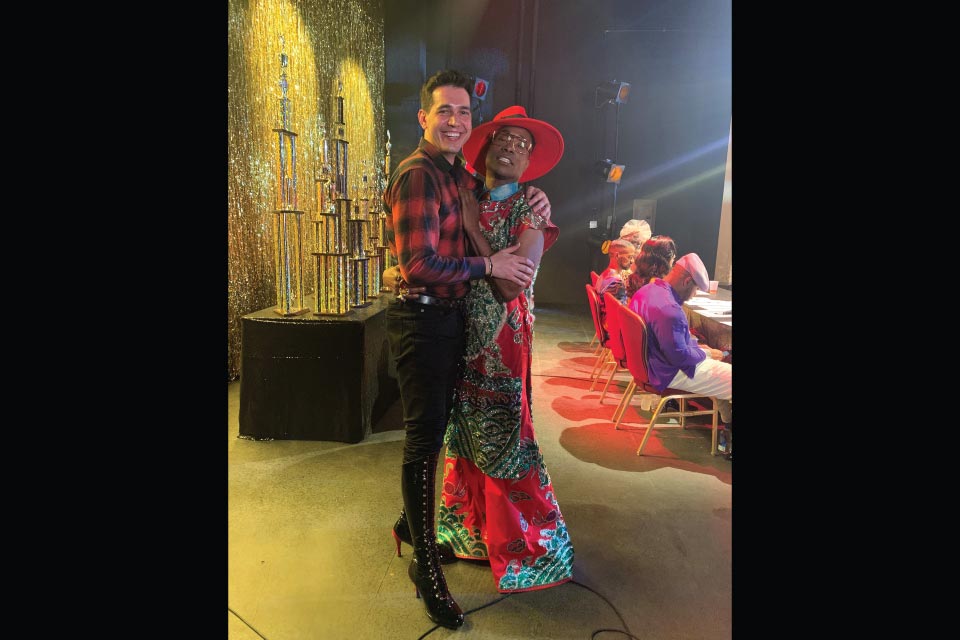 Friend and collaborator Billy Porter has worked with Popa on “American Horror Story” and “Pose.”

“Mentorship goes hand-in-hand with opportunity,” says Billy Porter, the Emmy-winning star of “Pose.” “Tanase has the resources to put the money where the mouth is and create true, signiﬁcant change. I have watched him as he’s nurtured the new and unbridled, as well as also being a calm in times of storm for us old-timers, too…. His job’s ephemeral nature makes it very difﬁcult to describe. All I can say is, Tanase is the full embodiment.” 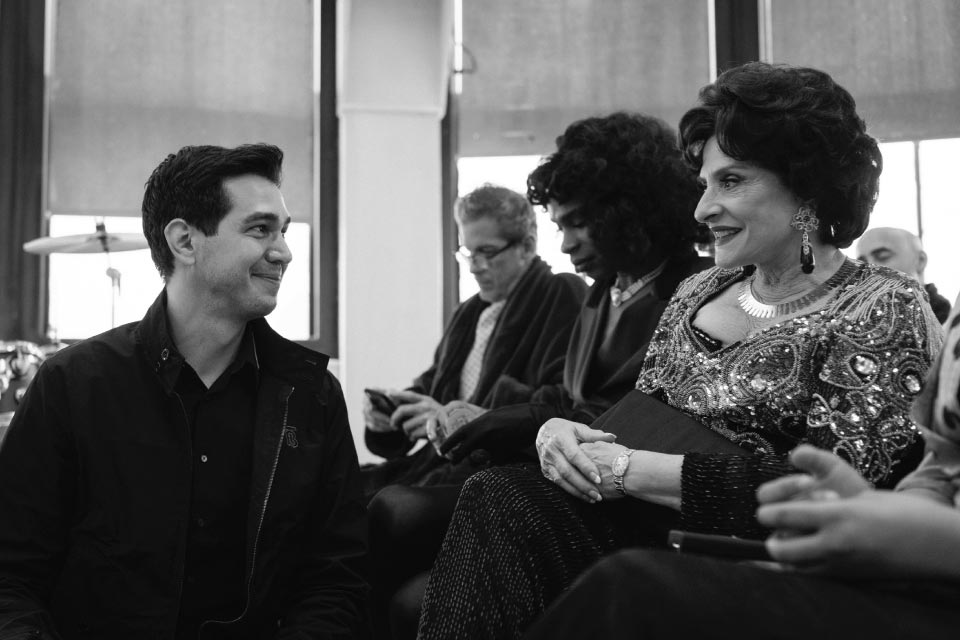 Veteran actress Patti LuPone has worked with Popa on a number of Award-winning television shows.

The term Popa often comes back to for himself is “connector.” He sees his role as a conductor for creatives, moving the pieces around to maximum success. It plays itself out in many different ways, from making pivotal casting suggestions, like Patti LuPone in Netﬂix’s “Hollywood,” to transitioning raw talent to ﬁlm careers, like author Janet Mock. It’s a skill set that took root at UNCSA because of the school’s intimate setting, which geared everyone toward healthy competition and ﬁnding their strengths. Popa says the school fostered a potent supportive environment, and that is something he tries to pay forward to this day.

“It gives you a full-circle feeling,” he says, “like everything you’ve learned and worked for is paying off.”

Kristopher Tapley (B.F.A. Filmmaking ’04) has covered the ﬁlm and television industry for 15 years, with bylines at Variety, The New York Times, Netﬂix Queue and The Times of London. He now works as a writer and a consultant in Los Angeles, where he lives with his loving wife, lively son and lazy cat.