School of Filmmaking is a partner in North Carolina's new training program for film, television and entertainment industry jobs

The top-ranked School of Filmmaking is partnering with the city of Wilmington, the North Carolina Department of Commerce, and others in an initiative to help grow the state’s film industry. The newly formed Film Partnership of North Carolina will launch a new film, television and entertainment industry training program with a $400,000 grant approved Wednesday by the Wilmington City Council.

The nonprofit Film Partnership will help build the skill set of the local and regional workforce with an emphasis on women and minorities who are largely underrepresented in the industry. The first training session will kick off later this year. 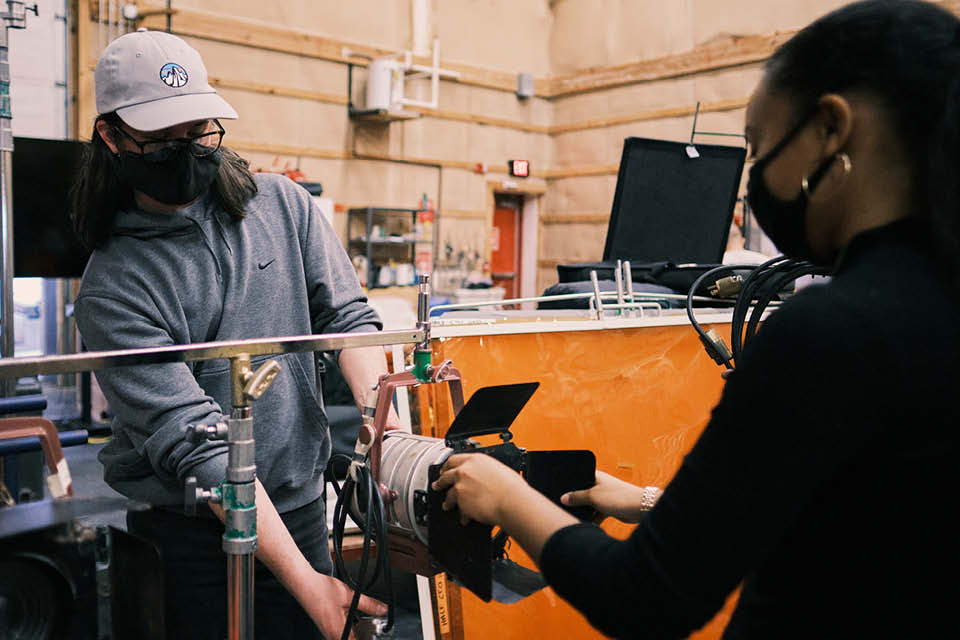 The School of Filmmaking is a partner in a new job training program serving the film, telelvision and entertainment industry in North Carolina. / Photo: Wayne Reich

Deborah LaVine, dean of the School of Filmmaking, said the partnership and the grants will help North Carolina attract more projects, which will boost the state’s economy. “The film and television industry cannot produce content quickly enough to satisfy consumer demands. The timing is perfect for North Carolina to cement its place as the southeastern United States’ most desirable hub for producing stories that highlight the rich diversity of our nation and are told by filmmakers and skilled workers who reflect that diversity,” she said. “These grants will be a tremendous boost, and we are thrilled to partner in the initiative.”

Lauren Vilchik, assistant dean and a member of the Governor’s Advisory Council on Film, Television and Digital Streaming, said she and her colleagues in the School of Filmmaking are eager to help design the curriculum for high school and community college students who want to learn trades that are essential to the creation of film and television productions. “To make a film or a television show, you need adequate facilities and locations and a skilled workforce,” Vilchik said. “This generous grant from the city of Wilmington will provide for high-quality training, which will attract more projects, and that hopefully will spark interest in funding for state-of-the-art production facilities and other infrastructure,” she added.

The timing is perfect for North Carolina to cement its place as the southeastern United States’ most desirable hub for producing stories that highlight the rich diversity of our nation and are told by filmmakers and skilled workers who reflect that diversity.

The initiative will also benefit UNCSA students and alumni, according to Vilchik. “Alumni can be instructors and mentors for the training courses, and both students and alumni will see expanded job opportunities as more projects flow into the state. We also hope to encourage our alumni to film their own projects here in North Carolina, and this initiative will provide the skilled crew they need,” Vilchik said.

This has been a banner year for film in North Carolina, with a record-shattering $410 million projected in direct spending.

“We are breaking records for film and production investments this year, and it’s important that we create a pipeline of well-trained talent to meet the demands of the industry,” said Darla McGlamery, business agent for Local 491 of the International Alliance of Theatrical Stage Employees, which is also a member of the Film Partnership.

The Film Partnership of North Carolina is a 501c3 economic development organization, vocational education resource and advocate structured to grow the film, television, and digital streaming industry in North Carolina by creating a diverse, well-trained and inclusive workforce. The partnership’s leadership is a diverse group of industry insiders who work on or invest in filmed content across the state. The partnership connects film influencers in and outside of North Carolina and promotes the industry with state, local, nonprofit and private partners.

Consistently recognized as among the nation’s best training programs for filmmakers, the School of Filmmaking at the University of North Carolina School of the Arts has produced some of today’s most creative storytellers, including Danny McBride, David Gordon Green, Craig Zobel, Zach Seivers, Brett Haley, Rebecca Green, Jody Hill, Jeff Nichols, Vera Herbert, Martha Stephens, Aaron Katz and Zoë White. Led by independent filmmaker and educator Deborah LaVine, who became dean in July, the award-winning faculty have decades of real-world experience and a passion for mentoring undergraduate and graduate students in concentrations that include animation, cinematography, directing, film music composition, picture editing and sound design, producing, production design and visual effects, and screenwriting.

Get the best news, performance and alumni stories from UNCSA.SUBSCRIBE TO OUR NEWSLETTERS(OPENS IN NEW TAB)