Reagan Mitchell says education is in his DNA. Coming from a family full of academics — his mother is a retired psychologist, his father was a historian and professor, and all three of his brothers have advanced degrees — it's a hard point to argue.

The Nashville native has an assortment of academic and artistic experiences that he brings every day to his work as a Humanities professor in the UNCSA Division of Liberal Arts. The common thread that has run throughout his experiences — from his jazz studies and work as a musician, to his advanced degrees in curriculum instruction, to his role as an educator — is an overwhelming and all-encompassing curiosity. "First and foremost, I'm a learner," he says.

That's something he brings to each of his courses (or, as he calls them, "learning communities") — he is there to learn, too. The desire and deep interest in learning is a path he's been on his whole life.

Mitchell’s background as an academic is something that began at birth, with the family and community he was born into. His father, Dr. Reavis Mitchell, was a professor and administrator at Fisk University, as well as a historian and the first Black person to serve as the chair of the Tennessee Historical Commission. His mother, Dr. Patricia Mitchell, is a retired psychologist.

"This whole process of education for me, I learned because of the community I was in," Mitchell says. "I had a dad that was on the PTA, but who would also go to middle schools and give a Black history lecture. I had a mom whose research supported launching the HeadStart programs in Nashville. That is my philosophical DNA when I come into the classroom. This has been a lifelong understanding." 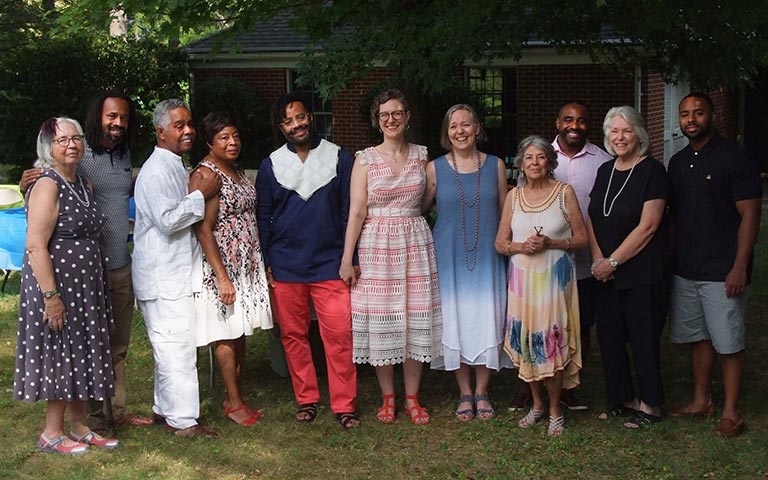 Mitchell (fifth from left) and family

With undergraduate and graduate degrees in Jazz Studies, Mitchell worked as a musician in Nashville after college. When the economy crashed in the late 2000s, his attention turned inevitably toward academia.

"My intent was to be in Chicago, being a freelance musician," he says. "I came back to Nashville in 2009 and it was the middle of the economic crisis. A lot of musicians were out of work, but I still had no intention of getting a Ph.D. at that time."

Spending time with his family moved the needle for him. At the time, Mitchell's brother, Dr. Roland Mitchell — who is now Dean of the School of Education at Louisiana State University (LSU) — was earning his doctorate. "I would hang out with him, go to classes and read with him," Mitchell says. "We were sitting around the house together, talking, and he said, 'Why don't you go back and do a Ph.D. in curriculum instruction?'

Mitchell decided to try the program for a year. Seven years later, he emerged with his doctorate and education specialist degrees in curriculum instruction from LSU, a hub of curriculum theory and home of the Curriculum Theory Project (CTP).

His work as a musician continued throughout his time at LSU. One of his primary academic advisers at LSU, Dr. Denise Egea, encouraged him to incorporate his music throughout his time there. "She found out I was a musician, and she required me to incorporate my music into what I did," Mitchell says. "I laugh about the fact that she was one of my heaviest composition teachers, because she would make me write [musical] pieces to go along with my papers." 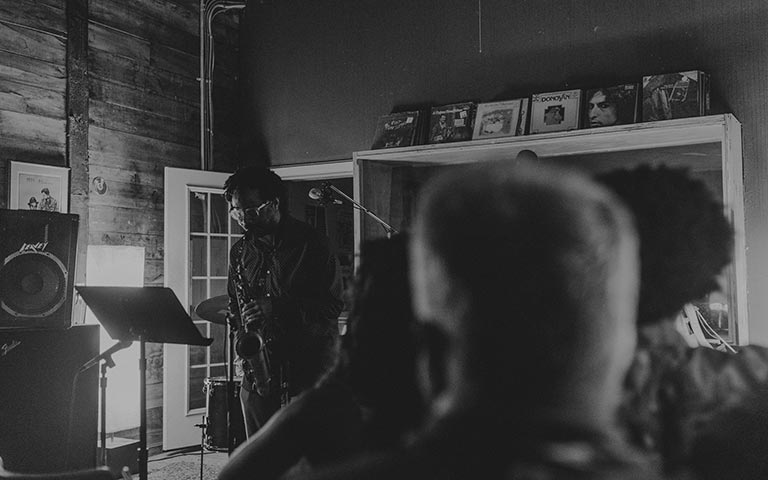 In fact, he adds, it was a robust musical period for him and solidified the connections between his work in music, education and a wide variety of other interests.

"I think of all of these things that I do, it's all academic, it's all intellectual to me," Mitchell says. "Whether I'm going out and engaging in activism, at an institution teaching, playing music — it's all deeply academic and intellectual work. Period. It's not separated."

And it's that ethos that he brings to his learning communities at UNCSA.

Each fall, Mitchell teaches a first-year seminar and the Self, Society and Cosmos course. His goal is to establish the courses as learning communities where students come to appreciate the power and beauty of their minds and the minds of their peers.

"I look at those courses as a way to give them an introduction to what I do, but also remind them, 'Hey, let's have a fun time thinking.' And carry that through. There are all these really cool ways to think."

Each spring, he teaches topical courses such as The Black Diaspora, Black Music, Black Feminist Thought and Critical Disabilities. All of the courses are discussion-based. "I think it's important that you get in the habit of talking to each other and understanding that it's not only my point that matters," he says. "We talk to each other because we are enriching the space. We all come in with this beautiful knowledge."

He encourages reflection in each course, through to the final exam, where he asks students to reflect on a piece from the semester that they disagreed with or that confused them. Courses culminate in a curated multimedia project.

In these learning communities, Mitchell says, each person brings their own intellect and knowledge to the table. "I want people to think about how they're engaging with this material, but also remember that they are already enough when they come to the space," he says. "They already have this beautiful mind. So let's engage with a variety of texts in a variety of modalities to think about other possibilities."

What I am concerned about is us engaging with deep education. I want you to really understand that you have this beautiful thing that you do and you do better than anyone else in the world.

"What I am concerned about is us engaging with deep education," he adds. "I want you to really understand that you have this beautiful thing that you do and you do better than anyone else in the world."

A homecoming at UNCSA

As a musician (and former music student), UNCSA is not a totally unfamiliar sphere for Mitchell. "Teaching at UNCSA has been like a homecoming to me. I had an arts experience before," he says. "But there was always this point of reimagining what I would want as a student. That was the thing that always bummed me out, because I could only take music courses."

It comes back to the interconnectedness he sees in his work and across disciplines. He encourages students to think about the historical and social contexts of what they do. "I often ask, especially in my Black Music course, 'What does it mean to be engaged with work in which there's a good portion of that community that couldn't walk through the front door?'"

He continues to approach those questions in his own music, most recently with Byron Asher's Skrontch Music, based in New Orleans. The ensemble is currently working on a multimedia project exploring topics like Jim Crow, Black women in Blues and James Baldwin. 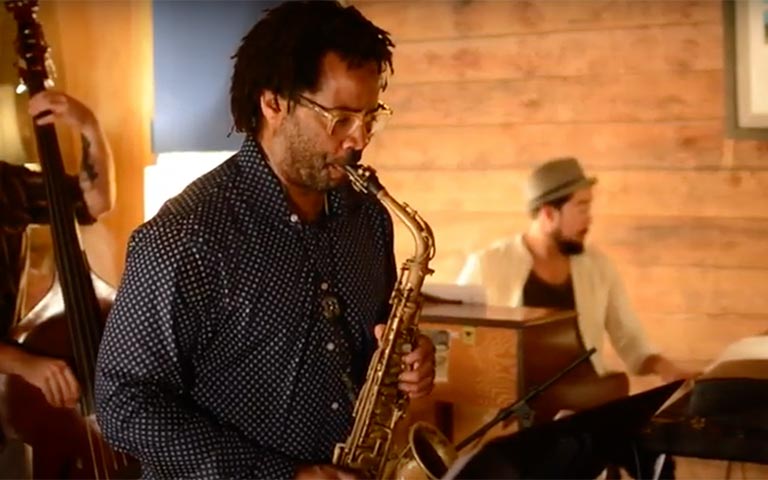 In all that he does, Mitchell brings that same sense of curiosity and the deep roots of his family and community. It ultimately informs his work as both an educator and a lifelong learner. "I see education as a way of community building. That's what I mean when I talk about deep education," he says. "How do we begin to radically reimagine what community might look like? And what does that process infer about our responsibilities?

"The act of engagement in education is always a radical equity imagining, dreaming project."