When "Masterpiece" screens with this year's fourth-year films from the School of Filmmaking, it will cap the first projects of its scale between graduate and undergraduate students for the school. Originating in a graduate-level class last fall, the six-episode series has broken ground in a number of ways, particularly in its episodic structure and cross-level collaboration.

Combining the worlds of classical music and slasher films, "Masterpiece" follows the story of violinist Jac, who discovers that committing violent acts has unexpected and beneficial effects on her musical abilities.

The project was a massive undertaking, with an extensive script, limited production timeline and students (and alumni) creating many of the rules as they went. For those students and alumni, the results were an exercise in teamwork that has been well worth the effort.

The "Masterpiece" trailer was produced by Rohit Lila Ram and edited by Cameron Wofford, with music composers Geet Chaudhari and Pierce Martin.

In the writers' room

The concept of "Masterpiece" came from the mind of graduate student and showrunner Sarah Deitrich, written for Creative Producing faculty Kim Zubick's "Writers' Room" class in the fall. As its name suggests, the class is styled as a writers' room, with each of the seven students in the class pitching their own ideas for a series. The group collectively chose, wrote and developed "Masterpiece" and approached Zubick about bringing the show to life.

Inspired by Deitrich's love of classical music and horror films (she points to the 2010 film "Black Swan" as a similar example), she says of “Masterpiece”: "The show asks, 'How far can you be pushed in your pursuit of perfection?'," a struggle many artists are likely familiar with, albeit with much different stakes.

Working together in the writers' room was a highlight for second-year graduate student Chanel Smith, writer, producer and casting director for "Masterpiece." "As a writer, it was fantastic. Each class, we were able to dive deep into each character and episode, which is so satisfying for me because I want to be a TV writer," she says. "The more we talked about the main character, Jac, the more she came to life. Working in a writers' room with my classmates was a dream of mine."

Transforming the written project into an actual production is a shift for many students in the graduate program. "Masterpiece" offered the chance to work with an undergraduate crew and bring the story to the screen as one of the first collaborations of its size between the two programs. Once Zubick and Lauren Vilchik, assistant dean of graduate studies and undergraduate producing faculty, were able to provide the greenlight, things ramped up rapidly. "We had about six weeks from when we pitched it to when we started shooting," Deitrich says. 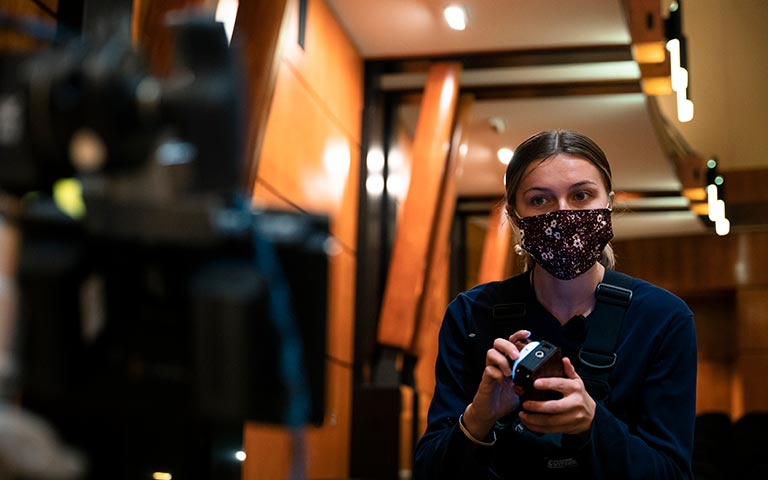 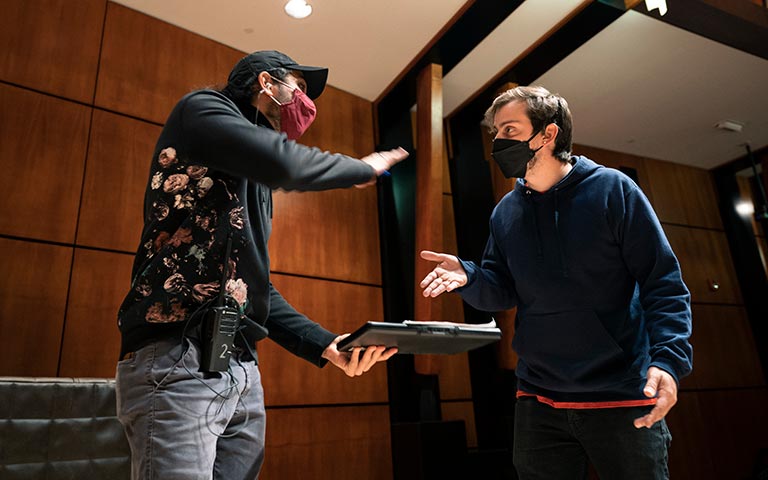 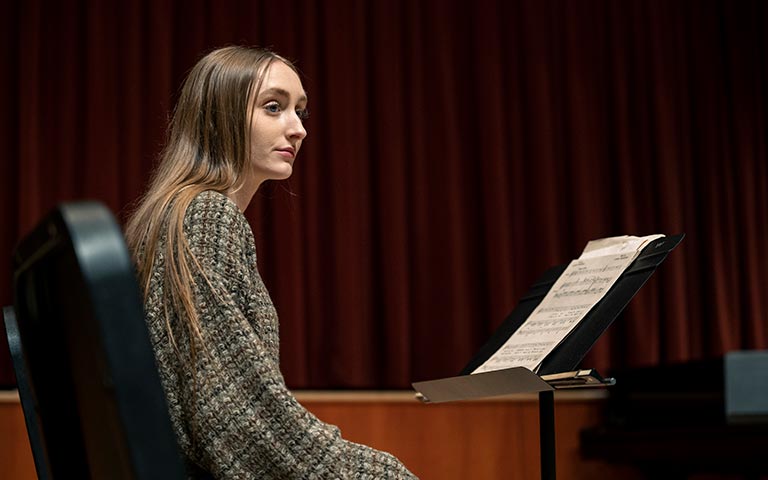 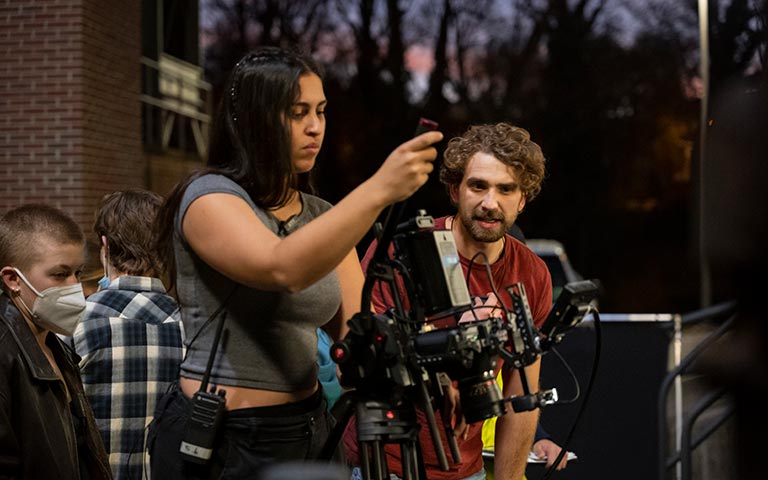 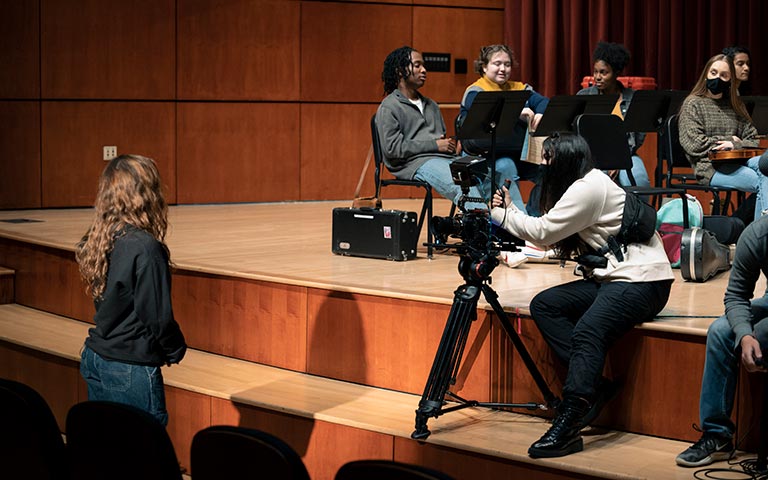 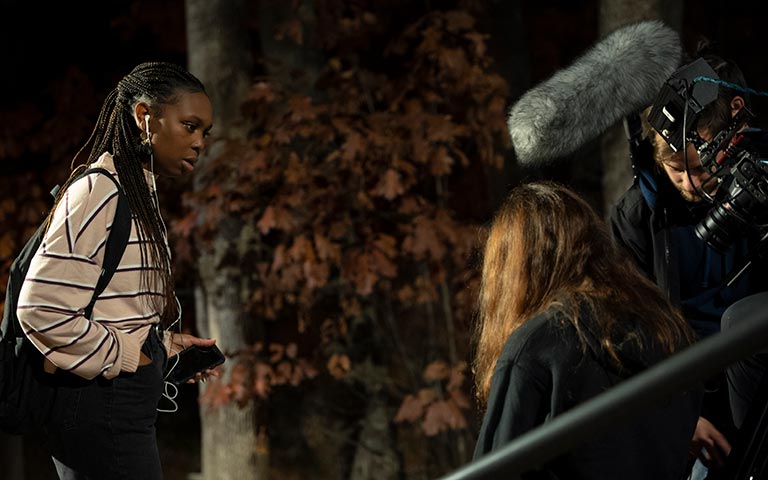 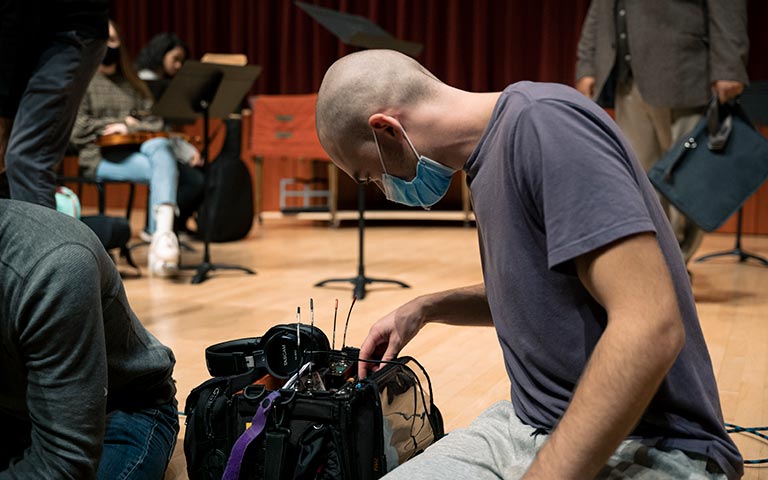 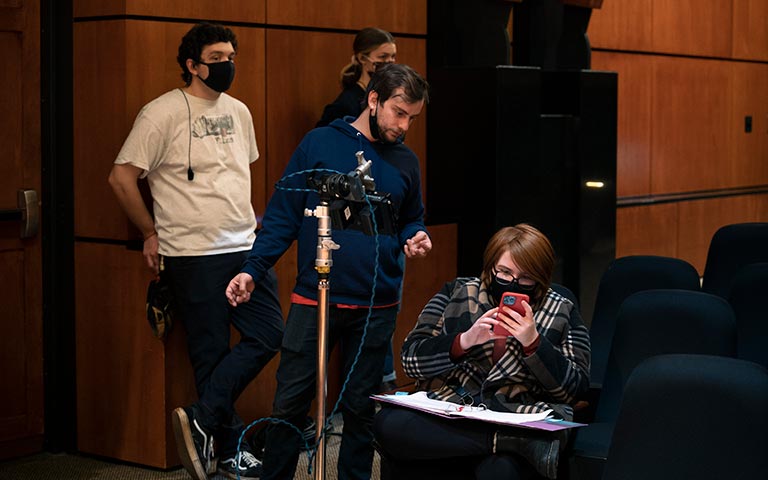 A quick and collaborative production

"Masterpiece" was filmed over five days in December, an impressive timeline for the amount of content in the script. For executive producer and first assistant director Rohit Lila Ram, a third-year undergraduate student, filming the series was a whirlwind, but one that came together well.

Many of the components of the series were ambitious, even for a production with the scope of a fourth-year film. "A third- or fourth-year film is usually an 8-12 page script, and students have five to six months to prepare," Lila Ram says. "'Masterpiece' was 30 pages of content and we had about a month to prepare. The production included eight stunts, special effects, blood, prosthetics, shattering glass and more than 10 locations." Among the crew members were a stunt coordinator and intimacy coach, and the School of Filmmaking was able to provide a lighting package, sound equipment and cameras.

What became quickly obvious, despite the crunch, was the sense of camaraderie and collaboration among cast and crew — a necessity given the fast-paced production. "Everyone focused on their task and we never forgot that the main thing is the story and the performance," Lila Ram says.

Smith, too, was impressed with the cohesiveness of the production. "When I arrived on set, I was in awe of the undergraduate students’ work ethic and how professional they were," she says. "It was a pleasure working with them to bring this project to life."

Behind the scenes of "Masterpiece"

Helping guide the production as one of its two directors was alumnus Jim Boemio (B.F.A. Filmmaking ’20). When Vilchik called him in the fall to gauge his interest in the project, Boemio was both flattered and excited. And he just happened to be close by in Asheville, N.C., working as a production assistant on the upcoming Amazon series "The Peripheral."

"Lauren Vilchik told me about the script and she knew it might be something I was interested in. It felt good to be recognized and remembered, and I didn't want to take that for granted," Boemio says.

Having spent time over the past two years working extensively with friends and fellow alumni on independent films and music videos, Boemio felt equipped to handle the no-frills production and accelerated timeline of "Masterpiece." Fresh off of his experience with "The Peripheral," he drew similarities in the process of the $100 million big studio behemoth and the film school series.

"I was able to bring another perspective to the 'Masterpiece' project as an alumnus," he says. "I have that experience from all of the independent projects, but also from within the industry. And I was able to implement my experiences on the set. It was important for me to be there and inject that hustle and energy. I think it was really beneficial."

A challenge and an opportunity

As the crew approached the end of the process, they were able to reflect on the creation of "Masterpiece" and the challenges it presented in terms of scope, timeline and resources.

We basically had the crew of a second-year film with the scope of a fourth-year film. ... It was definitely a challenge, but that also made it fun. With the amount of time and resources we had, it's a big accomplishment.

"We basically had the crew of a second-year film with the scope of a fourth-year film," Boemio says. "It was definitely a challenge, but that also made it fun. With the amount of time and resources we had, it's a big accomplishment."

For Smith, her work in so many roles throughout the process was enlightening. "On this project, I was the writer/executive producer/casting director, which gave me a chance to see how a project goes through development, pre-production, production and post-production," Smith says. "In addition, it allowed me to watch a scene I wrote come to life, which was an awesome experience. And to see the undergraduate students help with that, made me proud to be a part of the UNCSA community."

Lila Ram says the project renewed his interest and sense of belonging in the filmmaking realm. "This whole series was extremely stressful," he says. "But it made me feel like, 'Oh, this is why I'm doing this.' There were so many things about the show and filming that have kept me excited throughout this process."