Art has an unmatched capacity for opening the door to critical conversations. Gregg Mozgala (H.S. Drama ’96) has come to rely on that in his work as an actor and as artistic director of his own theater company, The Apothetae.

Mozgala is coming off a national tour of the play “Teenage Dick,” a modern take on Shakespeare’s “Richard III” commissioned by The Apothetae and written by Mike Lew. The play centers around the experience of Richard Gloucester, a high school senior with cerebral palsy, and the lengths he is willing to go in his quest to win the race for class president. 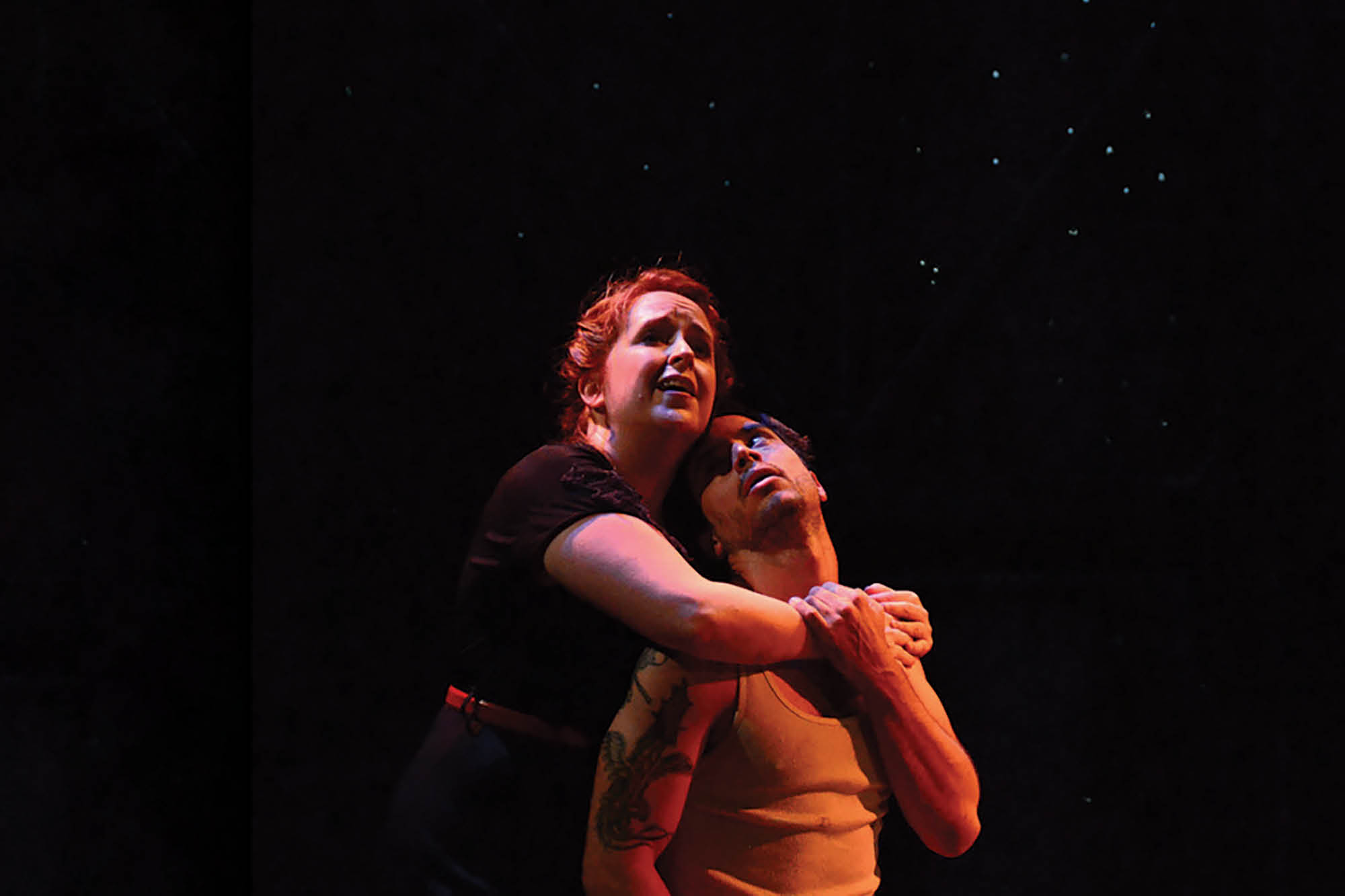 Playing the titular character, Mozgala was able to tap into his own life experiences to inform his portrayal of Richard. As an actor with cerebral palsy, Mozgala said Richard’s fears and anxieties are familiar, and he remembers them well from his days in the high school program at UNCSA.

He recalls a time in high school when novelist, screenwriter and School of Drama alumnus Peter Hedges (“What’s Eating Gilbert Grape,” “About A Boy,” “Ben Is Back”) visited the school as a guest artist. A thought-provoking assignment from Hedges served to crack open Mozgala’s sense of identity as a disabled person. “There was a realization that this would be a part of my life forever,” he says. “And I started to grapple with what it might mean for me personally and in this career. That anxiety and that terror became a major trait of the character in ‘Teenage Dick.’”

In many ways, Mozgala’s sense of his own identity (and his ability to come to terms with it) has evolved over the years — but his frustration with the industry is ongoing. There’s a lack in both the number of disabled actors appearing on stage and in the authentic representation of people with disabilities when they are on stage, he says.

“Once I got out of undergrad,” he said, “I realized I was only being seen for disabled roles. And even though cerebral palsy is a mobility disability, I was called in for characters with Down Syndrome, characters with autism. There was no consideration or real understanding of what it meant.”

All he wanted to do was act. So, he decided to create a path for himself.

“I never saw myself reflected on stage until I was on stage,” Mozgala said. And to see himself on stage more required taking ownership of some of the mechanisms to make that happen. In 2012, he founded The Apothetae to develop new works and roles for deaf and disabled actors. The company commissioned five writers to create new works — one of whom was Lew, who wrote “Teenage Dick.”

Mozgala was recently named an Alumni Artpreneur of the Year by UNCSA for his work with The Apothetae, with a $20,000 grant going to support the company.

“It was almost as an experiment to say, ‘Well if I’m only being seen this way, then roles need to be created that I can actually play with characters I can inhabit where there’s that seamless integration of disability and character,’” Mozgala said. “Being able to take agency and ownership over one’s experience through storytelling, I think, is very important.”

That model is based on the experience of other historically underrepresented and unrepresented populations. “Other communities — communities of color, the LGBTQ+ community — developed their writers, their talents from within,” Mozgala said. “They may have initially shared them with those specific communities and populations, but those stories eventually branched out into the larger mainstream. Theater was always the tip of the spear for that kind of representation. I was just following that model.”

Art is the change agent. Art enables the conversation. The play or the content is an entry point. People may not want to talk about disability, per se, but they will talk about the work, or the issue raised in that work.

In that sense, he sees “Teenage Dick” as an achievement. Although he’s likely done with the role after tour productions at The Woolly Mammoth, Huntington Theatre and Pasadena Playhouse in the 2021-22 season, Mozgala is proud that the play has graced the stages of the Public Theater in New York, Donmar Warehouse in London, Seattle Rep and others, creating jobs for other actors and theater professionals with disabilities.

And, most importantly, it has started conversations.

“That’s what theater can do unlike any other kind of art form,” he said. “It gives people an opportunity to be exposed to people, experiences and points of view they may not be used to. And they have to deal with it in real time — theater is an art of flesh and blood.

“One of the biggest things I’ve learned is that there’s so much fear and anxiety around disability. I always say, ‘Say everything you feel like you shouldn’t say and ask everything you feel like you shouldn’t ask.’ We can always course correct in terms of semantics, but people are so afraid to even speak about it for fear of making a mistake, they won’t even try to engage in a conversation.

“Art is the change agent. Art enables the conversation. The play or the content is an entry point. People may not want to talk about disability, per se, but they will talk about the work, or the issue raised in that work.”

His own work in the space is ever-evolving — and always aimed at moving the conversation forward. It is slow and painstaking at times, but he sees some signs of progress. He’s eager to move into other mediums, to expand the reach and accessibility of his work.

“I’m really interested in developing work for film and television,” Mozgala said, “and I’m a history buff. With the idea of history as a guide, what are our stories from the dawn of time until today? How can we hit a wider audience and bring the diversity of this experience to more people that could potentially be more affordable or accessible?”

While he’s always considering how the stories of deaf and disabled people can become more visible, he shies away from calling his work advocacy. He is, first and foremost, an actor. This summer he plays King Edward IV/Richmond in the Public Theater’s production of “Richard III” during the free Shakespeare in The Park series in Central Park, and he resumes his role in the Pulitzer Prize-winning play “Cost of Living,” by Martyna Majok, as it moves to Broadway this fall. He also helped to develop Queens Theatre’s Forward Festival of the Arts, a national festival highlighting the artistry of deaf and disabled performers.

“I’ve had to carve my own path,” Mozgala said. “And in doing so, I hope I have helped create opportunities for others as well. Because I’m an actor at my core, and that’s ultimately what I want to do. I don’t consider myself an activist or an advocate. It’s the art that has driven the change.”