The Arts of Language: ESL at Reynolds High School

High school is a challenging time for most teens. So much is changing in their lives and worlds, and the stress of young adulthood is beginning to set in. SATs, friendships, relationships, work, prom, college applications, extracurriculars. These things all coalesce to create a complicated and crucial four years. For ESL students, though, these already difficult years are made even more complex by the upheaval of transitioning to a new culture, new school, and new language. Having someone to guide them through those challenges and help them gain confidence in their English can make a world of difference, and that’s exactly what ArtistCorps members are doing at RJ Reynolds High School.

I recently spoke with ArtistCorps members Mayra Rodas (Picture Editing & Sound Design) and Scott Lee (Voice Performance) on a break between ESL classes. They’ve been working alongside other ArtistCorps members to help students gain a practical understanding of English through storytelling.

“A lot of people are more likely to learn when they get to be creative,” Scott explains. “When we show them what we do with character development and ask questions about what a character’s motives are or what they feel about their situation, we’re also showing them another way that they themselves can process these complicated emotions.” 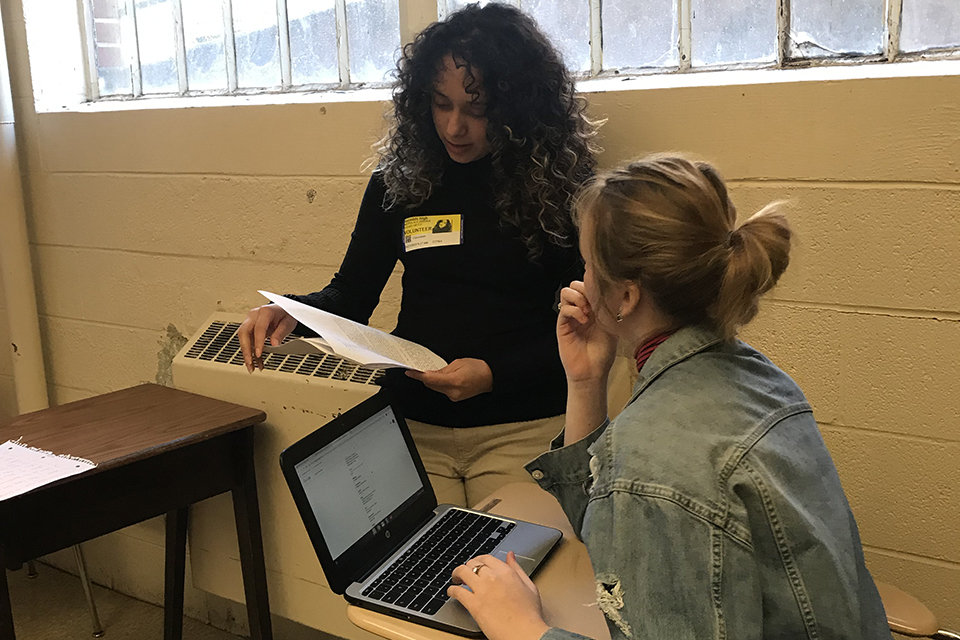 Mayra adds that allowing students to create and flesh out their own characters helps boost their confidence when it comes to speaking in front of other people. This freedom to create has led some students to discover their own potential as writers.

“We were doing an activity and I told one student he could either draw a poster or write a song,” Scott begins. “He came up to me and he had written a full song in one block. He put it in front of me and I asked, ‘Did you come up with this in here?’ and he said, ‘Yeah, I’ve had it in my head for so long and I’m finally writing it down.’ It was in English, too, not in his native language!”

He goes on to share a story about another student who began writing a novel thanks to their work with her ESL class.

“She came from a Russian language-speaking country and has been having a hard time building friendships,” he says. “Writing has become her way of making a connection with people.”

“She came up with this wonderful novel — with chapters — in one hour,” Mayra adds. “Her characters and their stories were so well developed, and the way she writes is so beautiful. I can really see what she’s writing about.”

ArtistCorps members have the unique opportunity to refine their understanding of their own craft by teaching these students about what they’re learning in their studies at UNCSA. This desire and willingness to share their own passions with the students they serve opens doors of creative freedom and exploration.

“When we get a new group we always introduce ourselves and our art,” Scott explains. “I show them a little bit of opera and ask what they liked about it, or if they liked it, or if they didn’t like it and why not and stuff like that. It’s cool to see their reactions because it’s something they don’t see every day.” 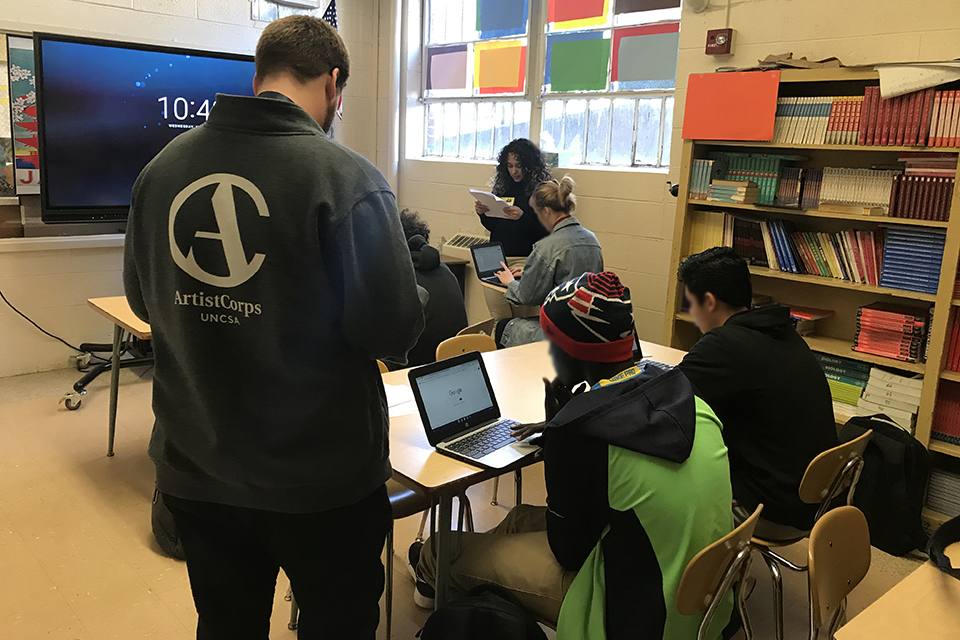 Mayra says it’s been fun showing the students what goes on behind the scenes when it comes to film.

“They kind of freaked out when I showed them the editing software I use,” she says, laughing. She says that, despite many of the students being avid film watchers, they’ve never seen what goes into creating the movies and shows they love. “I showed them how VFX shots are applied later on in the process while you’re editing. I showed them the beams of how the scenes are taken and how many takes are taken of each action and how many different angles. They were so surprised and said it looked complicated.”

But it’s not just the ESL students who are learning new things. Mayra says being at Reynolds this year has taught her a lot about herself.

“I never thought this would come out of my mouth,” she says with a grin. “I actually enjoy teaching, and sitting down with them one-on-one and helping them figure out how to conjugate verbs and whatnot.” She explains that serving in ArtistCorps while she’s also interning in her field of study has allowed her to see other dimensions of what it means to be an artist.

“I’ve realized that respect and creative freedom come in a lot of different ways. Being in ArtistCorps — especially in this program for the ESL kids — has given me that,” she explains. “I feel like I’m respected and I’m doing something to help people. That has really changed my perspective of where I want to go. I want a job where I feel good. It might not be exactly the same as what I expected in my career but as long as I feel good and I’m doing good for others I’ll be fine.”

Scott, too, has discovered a love for teaching through his time with the ESL classes.

“I’m not scared to teach anymore. I can do it,” he says. His training as an ArtistCorps member has given him the skills and confidence he needs to work in a classroom. “At the beginning of the year I was so nervous to go into a classroom. I didn’t know how to teach them but also keep them interested and make it fun. And I think I’ve learned to maneuver around all those things. I know that I have my tool belt that I’ve crafted through this year.”

Their time serving recent immigrants has changed Scott’s perspective on the ESL community as well.

“There were ESL classes in my high school, but I didn’t really pay attention to who was in there,” he begins. “Being here, I’ve gotten to know these amazing, intellectual students. Sometimes people skip over them because they don’t speak or are insecure with English, but they have really interesting stories to share. They have more life experience in some ways than I do.” He adds that this experience has made him passionate about elevating the ESL community and getting more people involved in welcoming these newcomers. “I think more people need to be a part of this sort of thing so they can realize that these students have just as many hopes and dreams as anyone else.”

For Mayra, serving these classrooms has been like looking back on her younger self.

“I always felt very close to the ESL community because that was my story as well,” she explains. “I came here when I was 15, didn’t have the language or anything like that. I’m from Venezuela, and there are two Venezuelan girls in the classroom and I know exactly what they’re going through. The situation in that country is awful.”

She says she wants to give them hope for their futures. “Having that mirror image of me when I was fifteen and seeing them going through that at such a young age — I try to give them the hope that, even though they don’t have control over what’s happening right now, they do have control over where they’re going from now on. The career choices that they make, going to school — I know it could be hard, but I’m hoping that by me saying that I know what they’re going through and now I’m in college, they can do the same. It just depends on how they want their lives to go forward.”

The value of what the ArtistCorps members do goes beyond helping the students gain a better understanding of the English language: at the core, this service is about giving them guidance in life.

“We have a responsibility to care for these kids,” Scott says. “When we finish service we never see them again. I’ll never really know where they’ll go, but I really hope that they’ll do something they love, and maybe that’s partially from having known us.”

Mayra believes that it’s important for the teens to have someone who is close in age to them encouraging them to get an education and follow their passions.

“I think it’s important for them to see someone young who is finishing college who can give them guidance on where they want to go and how to ask the right questions and to whom,” Mayra says of the value of ArtistCorps’ presence in the classroom. “It’s important to us as well because we learn from them as much as they learn from us.”