A dance performance at Manatee School for the Arts

A life in dance comes full circle for Cheryl Carty

Cheryl Carty believes that dance education changes lives. From being supported by her childhood dance teachers to studying at UNCSA, she says that learning dance is the way that she discovered herself. Carty, the co-founder of Florida’s Manatee School for the Arts and co-chair of its ballet program, has spent more than two decades educating the next generation of dancers.

Carty has enjoyed a storied career as a dancer, including a long run with the Radio City Music Hall Rockettes. She has directed and choreographed award-winning musicals such as “Crazy for You,” “Brigadoon” and “Godspell” in the Sarasota and Manatee Players theater community. We talked with her about her journey to becoming a professional dancer, choreographer and arts educator.

How did you discover dance?

Growing up in Clearwater, Florida, I always loved music, and my mother loved to dance. She wanted to be a dancer, and once auditioned to perform with a traveling group. They offered her a job, but her parents wouldn’t let her go. She went to business school instead and it really impacted her for the rest of her life. So, I grew up with a mother who wanted to dance but really wasn’t allowed to. She always played music in the house and encouraged me to move.

I had a complicated childhood. My mother also had mental health issues, and my parents divorced when I was seven. We were very poor. But I was able to take a dance class once a week, and at a young age got my first scholarship to a dance school. It was a work scholarship, so I cleaned the studio along with taking classes.

My home life became more and more difficult; my mother went through depressive episodes. I needed that dance studio, and learned to channel my energy into dance. I was lucky that I had teachers who encouraged me, even picking me up and driving me to classes.

How did you learn about and get to UNCSA?

A friend of mine said she was going to an out-of-state workshop—it was like $35 a week! I went, and during that workshop a friend told me that she was going to the school next year. A ballet teacher from Augusta, Georgia, arranged an audition for me and somehow I got in. I thought, “I can never afford this.” But I learned about scholarships and found a way.

I then asked my mother if I could leave to become a dancer, just as she had once asked her parents. I’m sure she didn’t want to let me go, but she said yes. It was a miracle, one of many in my life.

Tell us about your experience at UNCSA.

The first year of school I learned how to keep up with the group. I was young and nervous. The second year I came into my own a bit. I remember dancing a solo in “The Planets” and performing as The Arabian and as a snowflake in “The Nutcracker.”

One day when I was performing in “The Nutcracker” I hadn’t eaten enough and during a move in which I was upside down, I landed the wrong way and seriously injured my ankle. That was a difficult time. But I made it through, graduated at 17 and immediately went to work. I actually missed graduation because I had to get to my first job.

How did you you build your career, and how did it evolve?

“I moved to New York, immediately started to audition and got a dinner theater job right away doing “Carousel.” I went home to Florida in winter, then came back. My friends from the School of the Arts were very helpful, from helping me get jobs to navigating the theater world. I got jobs as I could, working in dinner theater, taking classes and earning money as a waitress.

Though ballet was my first love, I found out I liked learning about jazz too. Then I auditioned for a ballet company called American Chamber Company out of Carnegie Hall, and got that job. We traveled all over. During that time I auditioned for Radio City Music Hall as a ballet dancer and got it, but three weeks later that company folded. However, I was then asked to become a Rockette. I performed with the Rockette from 1976 to 1986, during which time I also did shows, including Off-Broadway. I also choreographed shows, including some at the Equity Library Theater. I also had my two sons, Zach and Nick. 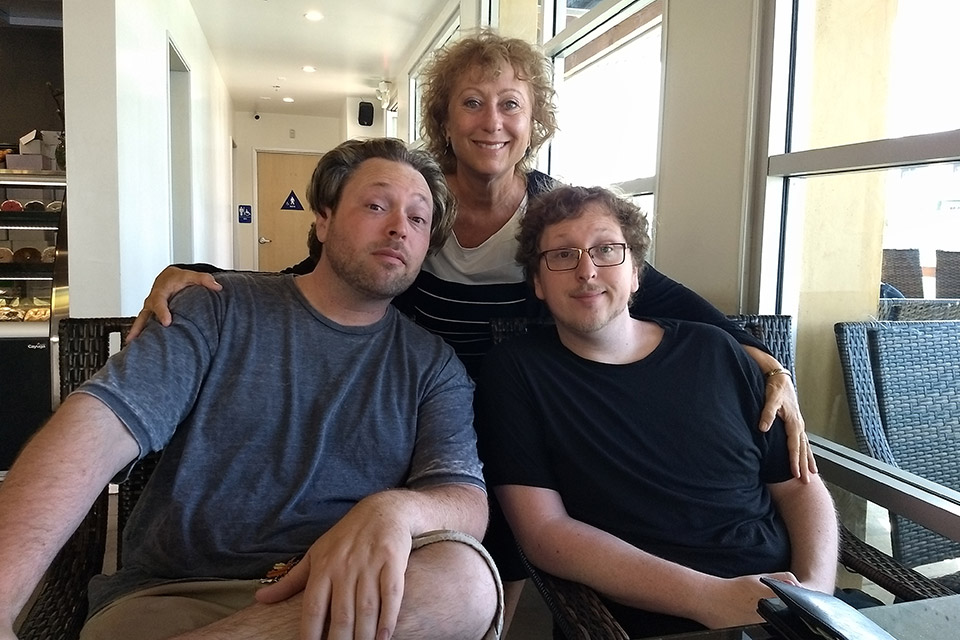 Cheryl Carty and her sons.

I had so many wonderful experiences with them. I traveled with them during their only European tour—the 50th anniversary show—which took us to France and Germany. We performed the “Dancing in Diamonds” number, the one with 150 kicks.

I also got to perform with some real legends, people like Peter Allen and Liberace. Liberace was so incredibly nice. But during one of the shows the curtain got stuck. We were all running with candelabras in our hands and got knocked down by the curtain! It was pretty funny.

How did your career evolve at this time? What was the pathway to become an arts educator?

During my time with the Rockettes I began to learn how to teach dance, including at the American Dance Machine. I took a class in commercials and landed a commercial with one of my sons, who was five at the time. When he was about seven years old, we decided to move back to Florida. In addition to the sunshine and temperature, I really need to be around water— pools, lakes, beaches and rivers. Somehow the fluidity of the water and the movement of the waves is a dance that brings me the most peaceful feeling of lucid creativity and physical peace.

Somehow the fluidity of the water and the movement of the waves is a dance that brings me the most peaceful feeling of lucid creativity and physical peace.

I began to teach at studios in Florida and then opened my own school, Carty Academy of Dance. I had a friend who had a not for profit called Born to Act. She asked if I wanted to take it over, and I did. We changed the name to Born to Broadway. Through that work I met Dr. Bill Jones. Dr. Jones had the idea that this area [of Florida] needed a public charter school that would have a strong arts and academic program. Born to Broadway became the launching pad for the charter school, which became Manatee School for the Arts. We opened the school in a converted bowling alley in 1998.

How has Manatee School for the Arts grown since then?

Fast forward 20 years later, and we now teach students sixth through twelfth grade, have eight dance studios, and teaching everything—modern, ballroom, tap, jazz. This year we’re adding Pilates and Acro. We have a hip hop competition team called Heat, and they rank seventh in the nation. One of my former Carty Academy students teaches at Manatee and leads our competitive hip hop and jazz teams.

We have a strong dance program here, where students closely collaborate with one another. I believe arts education is about learning who you are and how to embrace the world with your hands and feet—learning what your body can accomplish and also what your limitations are. 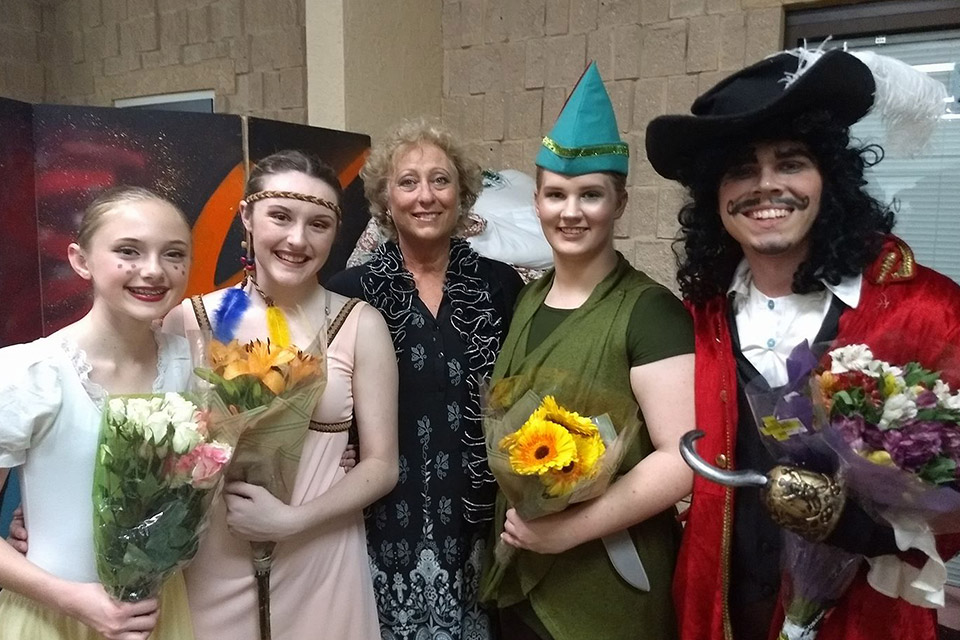 Palmetto, the town where the school is located, is a place where many children wouldn’t get this kind of exposure to the arts without the school. We intentionally chose the location of the school to serve these students.

We’ve found that the programs at Manatee make kids want to stay in school and finish school because they are not only receiving an education and friends, but also a sense of satisfaction from both the arts and academics.

What do you enjoy most about working with the students?

For me, dance is playing. The students don’t know that when they come in and have all kinds of preconceived ideas when they arrive. I enjoy teaching them that hard work, sweat and learning are fun, and the magic is being able to put together all these new skills. I enjoy seeing them find the satisfaction and joy in dance by accomplishing a technique or understanding the rhythm of the music. They learn that dance is filled with life lessons. Dance isn’t just steps, or pieces of choreography, but a way to express ourselves and find freedom.

I enjoy seeing [students] find the satisfaction and joy in dance by accomplishing a technique or understanding the rhythm of the music. They learn that dance is filled with life lessons. Dance isn’t just steps, or pieces of choreography, but a way to express ourselves and find freedom.

Do you still dance?

Absolutely! There is a lot of talent in this area, and many of us who grew up dancing here didn’t leave, or have returned after living elsewhere. I’m deeply connected to this community, and have been performing here for many years. I’m fortunate that I still get work as both a dancer and a choreographer. I still take Saturday ballet classes, and love being part of this very talented community. Florida is my home, and we are surrounded by talent here. I am so thankful to still be doing what I fell in love with all those years ago.