Working at Cirque du Soleil is like a circus

Shanomie Blackwood (’13) is living it up in Orlando, Florida, as she works on Cirque du Soleil’s show "La Nouba," derived from a French phrase meaning just that — “to party” or "to live it up." The two-shows-a-day schedule has Blackwood working hard, but she is doing what she’s loves — working in technical theatre. 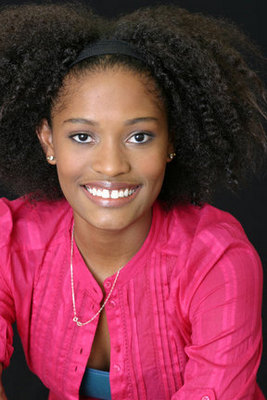 “I knew I loved building and creating things,” Blackwood says. “It’s the fascination of seeing something on paper come to life and helping others display their talents.”

Blackwood was a natural fit for UNCSA’s School of Design & Production. She came to the school with a wealth of experience as a graduate of Fiorello H. LaGuardia High School of Music & Art and Performing Arts in New York City. She had several internships – including with the Kaufman Center in New York where she painted scenery for children’s summer workshops – under her belt. Along the way, people in the technical theatre recommended UNCSA to her as a college possibility. She was excited, but there was the problem of cost.

“I actually had to turn down my acceptance to UNCSA because I couldn’t afford it, but then I found out I got the scholarship which paid for my first year,” Blackwood says. “The scholarship was a godsend.”

Blackwood was the first recipient of The Larry Leon Hamlin and Sylvia Sprinkle-Hamlin/Winston-Salem Urban League Endowed Scholarship. The scholarship is awarded in alternate years to first-year students studying at the School of Design & Production or the School of Drama. The scholarship honors the late Larry Leon Hamlin, founder and artistic director of the National Black Theatre Festival, and his wife Sylvia Sprinkle-Hamlin.

The scholarship selection process is extensive as the candidates are evaluated on the strength of their audition, community service, leadership capabilities and academic achievement. As part of the scholarship, Blackwood interned and helped with the preparation for the National Black Theatre Festival held in early August.

“It was a bit hectic,” she said of her internship. “There was a lot going on, but it was fun. You’d be working on something for a show that may be down the street or even across town.”

The next three years at UNCSA she said she worked and took out loans to pay for college.

“It was frustrating, hard, and you had no social life,” Blackwood said. “But it was all worth it at the end of the day.”

Blackwood spent a good chunk of any free time she had being involved in the college’s Student Government Association. Her work here is evident every August as she named the Welcome Squad, which is the group of student orientation leaders, and was its first co-coordinator.  Though this is a volunteer group, it is quite selective of its members because the mission of the group is all about first impressions. The members of the Welcome Squad are the cheering students who greet carloads of nervous college freshman and parents on move-in day and help incoming students throughout orientation.

Her work ethic is unmatched. She was a part of student government that helped shape what our student leadership looks like today. - Steve Gallagher, Director of Student Engagement

"Her work ethic is unmatched. She was a part of student government that helped shape what our student leadership looks like today," said Steve Gallagher, Director of Student Engagement.

The admiration is mutual.

“Steve is always there for his students,” she said. “If you have a bad day or not and just need somewhere to hangout between class, his office was always open."

Upon graduation she secured a job with Cirque du Soleil. She started out in rigging, keeping the performers safe as they fly over the stage. She recently moved into the carpentry department, where she routinely checks the props and, if needed, builds props in-house. She says she meets several UNCSA alumni in her line of work.

“I keep running into alumni,” she says, “that speaks well of the school that so many are working in the field.”

Next? She says she’d like to work on Cirque du Soleil’s touring shows.