While Martha Stephens ('06) may not be your typical girl next door, to those in her small Kentucky town she fits right in. Maybe a bit quirky, somewhat reserved, she is extremely humble and down-to-earth, with not a pretentious bone in her body. But the graduate of UNCSA’s School of Filmmaking has something to be very proud about. Not only is she a Spirit Award winner, but she just sold her latest film, “Land Ho!” to Sony Pictures Classic.

Despite the success, she hasn’t strayed too far from her roots, opting to live just 20 minutes from her hometown. Stephens grew up in a gritty, industrialized Appalachian town in Kentucky where the opportunities for “fun” were somewhat limited to the small movie theater and one’s own imagination.

“It was simple,” she said of her upbringing, “but there’s something nice in a childhood routine.”

Luckily for Stephens and her three older brothers, their mother, a painter, helped expand their imaginations through art.

“She always made art a big part of our lives,” Stephens recalled. “While other kids were going on trips to Myrtle Beach, we were going to D.C. for the art museums.”

A small town gave way to a small school, where Stephens graduated with 60-some fellow classmates. There weren’t many unique offerings in the form of arts classes while she attended - although now there is an entire art wing where an autographed poster for “Land Ho!” now hangs. “There was a drama club,” she said skeptically, “but nothing really happened except for going to the Cincinnati Renaissance Fair once a year.”

While some students may have turned to athletics to fill the extracurricular void, Stephens, a self-described introvert, opted for reading books.

“I was always a very visually oriented person, I always loved storytelling, so books were an escape,” she said. And since “film is visual storytelling, it was a sweet spot for me.”

Stephens grew up fascinated by and drawn to Tim Burton movies, especially “Edward Scissorhands” and “Beetlejuice.”

"All of these movies are about misfits. I’ve always had that complex of not fitting in,” she explained, “of yearning for something that you can’t quite put a finger on." 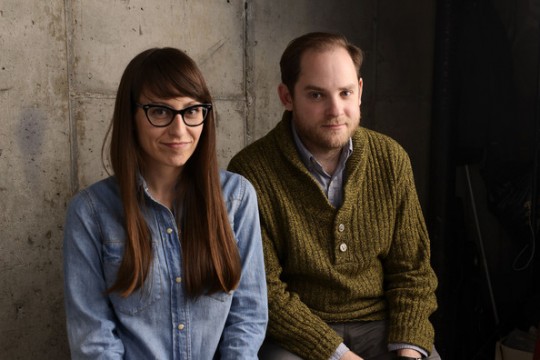 Read more about the making of "Land Ho!" and their time at UNCSA at We Got This Covered and TribecaFilm.com.

Stephens’ first real taste of filmmaking came from a stint in Governor’s School where she was able to attend classes for five weeks on a college campus. Participating students were able to choose their “major.” She chose film.

With that brief encounter, Stephens knew that filmmaking was her calling. She began to look into filmmaking programs at various schools, with her father pushing for the full-ride she could receive at the University of Kentucky. But her mother happened to meet UNCSA’s Dean of Filmmaking at the time, Dale Pollock, and so the bug was put in her ear to make the trek to North Carolina.

“I can’t imagine myself at any other school,” Stephens said. “It was the best fit for me coming from a really small town, a bit less intimidating.”

Although the small size helped the transition, she admitted to being very intimated at the start. “There were kids from all over, and I felt like this bumpkin coming in,” she said. While many students were rattling off their studies of obscure movies and filmmakers, she remembered worrying that the most obscure filmmaker she knew was Wes Anderson.

But she quickly learned that filmmaking has nothing to do with what you’ve seen or who you’re familiar with. It boils down to how good of a storyteller you are. “Just cause you’re a fan or a critic doesn’t mean you can make a movie or be better at it than me,” she said. It was this realization that helped her feel comfortable pursuing her dream at UNCSA.

During the first two years of the program she was able to try her hand at all facets of filmmaking before being accepted into the Directing concentration.

Courses that really stood out for Stephens were Renata Jackson’s theory-based class, and a Stanley Kubrick course where students directed various Kubrick scenes shot-for-shot. Screenwriting workshops were instrumental in allowing Stephens to explore her creativity, and production courses where students rotated positions in creating a film helped her gain an appreciation of all filmmaking components. While she loved editing, sound editing was a different story – “it was way beyond my comprehension!”

“I owe a lot to the school,” Stephens said. “It was the foundation of my learning. I’m proud to come from the same pool of filmmakers as David Gordon Green and Jeff Nichols. There’s something really special about that.”

Her “heroes” were the writers and directors of films she revered, and it just so happened that one day in her sophomore year she ran into one of her biggest heroes, David Gordon Green, in a parking lot in Winston-Salem.

“He’s been nice to me since I was 19. It’s hard to believe that 10 years later he was the executive producer of one of my movies,” she said. “I’d pass on that kindness to anyone out of that school. It’s kind of a weird club, we’re all on common ground.”

Those she was at first intimidated by became her close friends, both socially and professionally. “The friends I made there, we’ve all influenced each other and still do. There’s a core group of friends that I still work with,” she said.

During her summers Stephens taught summer sessions at UNCSA until she graduated in 2006.

“In the classic Martha way, I thought ‘to hell with Los Angeles! I’m taking the road less traveled.’” And that she did. She and two of her classmates packed up and moved to Austin, Texas on the heels of the filming of “Grindhouse” in hopes of finding easy work.

After a year of struggling to find work, Stephens headed back home to Kentucky. Discouraged, and with “no possibilities in sight,” Stephens enrolled in a grad school program for education as her backup plan. A year of student teaching easily “sealed the deal that there was nothing I’d be good at other than filmmaking,” she said.

She packed up again and moved to Asheville, N.C. where she found a job at a bar. She knew that work was not going to come easily, but she had set her mind to writing her own screenplay. “Passenger Pigeons” was the result. In 2010, it debuted at the SXSW Film Festival.

“The rest is history,” she said. “This was a sign that I needed to make movies. People really start to notice you in the festival circuit, and I didn’t know anyone!”

Her second film, “Pilgrim Song,” premiered at the 2012 SXSW Festival. And in 2014 her latest film, “Land Ho!” that she co-wrote and directed with fellow UNCSA alum Aaron Katz, premiered at the Sundance Film Festival. Not only has this film received a 2015 Spirit Award, but it was also recently purchased by Sony Pictures Classics.

“I remember staying up ‘til about 2 a.m. going over and signing papers for that deal. I was so tired,” she recalled. “It didn’t really sink in until I woke up. It was very surreal.”

After all the “big-city” recognition, she said, “It’s nice to come home, back to a sleepy environment” where she lives with her husband of four years. No one really knows what she does for a living, but it suits her just fine. “Being in this small town has forced me not to be in a bubble. I guess I’m kind of a novelty.”

Most of Stephens’ films capture this small-town aesthetic, exploring social issues through slice-of-life, regionally specific stories. She admits that “Land Ho!” is a bit of a departure from the norm, but it oozes with her dry sense of humor.

And the reason for her success? “You have to stay true to yourself. People have a tendency not to, and I think that’s why people make bad choices,” Stephens said. “They try to do what people like or expect, and you end up getting yourself into trouble. Find out who you are as a filmmaker instead of doing what’s cool.”