Every summer, the Aspen Music Festival and School offers its students the opportunity to learn from and perform alongside some of the world’s most revered classical musicians.

And the Thomas S. Kenan Institute for the Arts makes it possible for young musicians from North Carolina to take advantage of that rare opportunity through its Kenan Fellowships at AMFS.

Kevin Murphy, a Kenan Fellow in 2015 and 2016, says he’ll never forget watching a live solo recital by Augustin Hadelich, the Grammy-winning classical violinist from Italy who studied at The Juilliard School. 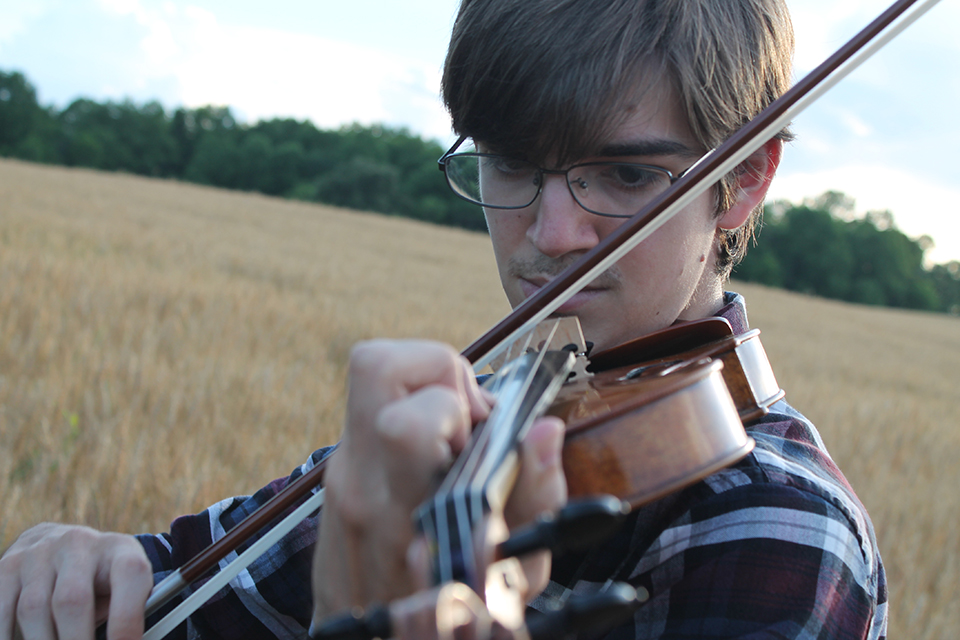 “I remember thinking that we in the audience were witnessing the rise of a truly gifted, poetic solo musician, someone who will be one of the great classical musicians of the 21st Century,” recalls Murphy, a violinist who graduated from the University of North Carolina School of the Arts in 2016 and now is working on a master’s degree in music at Rice University in Houston, Texas.

The country’s premier summer music festival, AMFS offers Kenan Fellows eight weeks of intensive one-on-one instruction and professional performance experience of unparalleled depth and breadth. The Kenan Institute covers the full cost of tuition as well as room and board, travel expenses and health services for four fellows each summer — two from UNCSA and two from UNC-Chapel Hill. More than 600 students from some 40 countries attend the program in Colorado. The majority are orchestral students, others are singers, conductors, composers and pianists.

Trumpeter John Parker, a graduate of UNC-Chapel Hill, jumped at the chance to take private lessons with Thomas Hooten and David Bilger in 2012, the first year the Kenan Institute offered the fellowships. Hooten is principal trumpet of the Los Angeles Philharmonic Orchestra; Bilger holds the same position with The Philadelphia Orchestra.

They weren’t necessarily hard on me, but they were very critical of my playing. I was able to take all that feedback and apply it to my practice ... I feel without their feedback I wouldn’t be where I am today.

“They weren’t necessarily hard on me, but they were very critical of my playing. I was able to take all that feedback and apply it to my practice in Chapel Hill. I feel without their feedback I wouldn’t be where I am today,” says Parker, now associate principal trumpet of the Houston Symphony.

“That summer lit a fire under me. It reinvigorated and inspired me to be the best musician I could be.”

Jennifer Johnston, vice president and dean of students at AMFS, has seen many a career launched from Aspen.

“When you are sitting next to the concert master of the Chicago Symphony, you feel the urgency to perform at a level that would make you feel good about playing alongside this person,” Johnston explains. “Really there is nothing like it for finding motivation and inspiration in your art.”

Frenetic may best describe the pace at which orchestral students tackle new repertoire for weekly performances. They also are encouraged to participate in chamber music and community outreach activities and to attend as many of the nearly 400 performances, master classes, lectures and panels as possible.

“They prepare for orchestral performances within five to seven rehearsals. That is a huge amount of repertoire they are going through in eight weeks, and they are performing in venues that seat up to 2,050,” Johnston says.

One of the first things Murphy learned in Aspen is that perfectionism has no place in a professional orchestra. During week two of his first summer there, the violinist found himself sitting third stand in the festival’s flagship orchestra.

“They threw us Also spruce Zarathustra, one of the crazy-difficult tone poems Richard Strauss wrote for orchestra. It is just brutally difficult,” Murphy says. “That was the moment I realized they are not playing around. There are passages in that piece that are literally unplayable — you just do your best. The good news is I never have to play that piece for the first time ever again.”

From his experiences in Aspen, Murphy became a keen sight reader, a skill his classmates at Rice comment on today.

“I had this kind of mentality that you have to learn every single note, and there was no way I could learn every note of the music that was given to us within three days. I learned that is not what professional musicians do. They can’t.”

Parker, a native of High Point, recalls feeling “out of place” his first few weeks in Aspen. But he found the students to be quite supportive and equally as passionate as he was about music.

“You know, small-town boy meets big-time competition. I felt I didn’t compare to everyone else there. After I got over that I felt there was no limit to what I could do.”

Indeed, Parker has enjoyed success in the orchestral world since his days in Aspen — he actually won a position with the Charlotte Symphony while still in college and then with Houston a mere two years later.

“I was getting a music education degree at UNC in 2014 and was preparing to go student teach in Raleigh. I had everything lined up. I took that audition on a whim and I won it,” he says.

“Once anybody gets that confidence in what they are doing, it shows in how they play and how they approach music in general. The students there inspired me to tell myself that it was possible.”

Parker firmly believes he wouldn’t be where he is today if not for the Kenan Fellowship at AMFS.

Johnston says many Kenan Fellows feel that way: “That’s what makes the Kenan fellows unique in Aspen. They value the opportunity as an honor to be recognized as a named fellow. They carry it forward and represent the Institute and the Aspen Music Festival well.”