SPACE on Ryder Farm a life-changing experience for Kenan Interns

Grant Conversano discovered a greater sense of purpose and the courage to ask himself some tough questions.

Margaret Gayford received a warm welcome into the most functional living and working community she’s ever experienced.

All students at the University of North Carolina School of the Arts (UNCSA), they worked as interns this past season at SPACE on Ryder Farm, a nonprofit artist residency program founded by UNCSA alumna Emily Simoness.

Every June through October, SPACE hosts residencies and retreats designed to reinvigorate artists and creative innovators while contributing to the ongoing viability of one of the oldest organic family farms on the East Coast. As many as four interns each year from UNCSA have been supported by the Thomas S. Kenan Institute for the Arts in partnership with Simoness, who graduated from the arts conservatory in 2007 with a BFA in acting.

“They really and truly live with people who are at the top of their game in the profession they want to be in,” said Simoness, noting that interns gain not only experience in arts administration but also connections with a community of professional artists and industry leaders in New York City, where many will choose to launch their careers. Campbell and Gayford are fourth-year drama students at UNCSA; Conversano, a fourth-year film major.

“The minute that these students graduate from school, their reality is entirely different than it has been in the halls of the University of North Carolina School of the Arts,” Simoness said. “If there is an opportunity to make the landing a bit softer or equip them with more relationships, more perspectives and a community, I think the value of that cannot be overstated.”

Far from the feverish environment at UNCSA, yet just an hour north of New York City, Ryder Farm offered the interns both the time and space to enjoy the beauty of their surroundings and to contemplate their futures. They described the experience as “life-changing.” 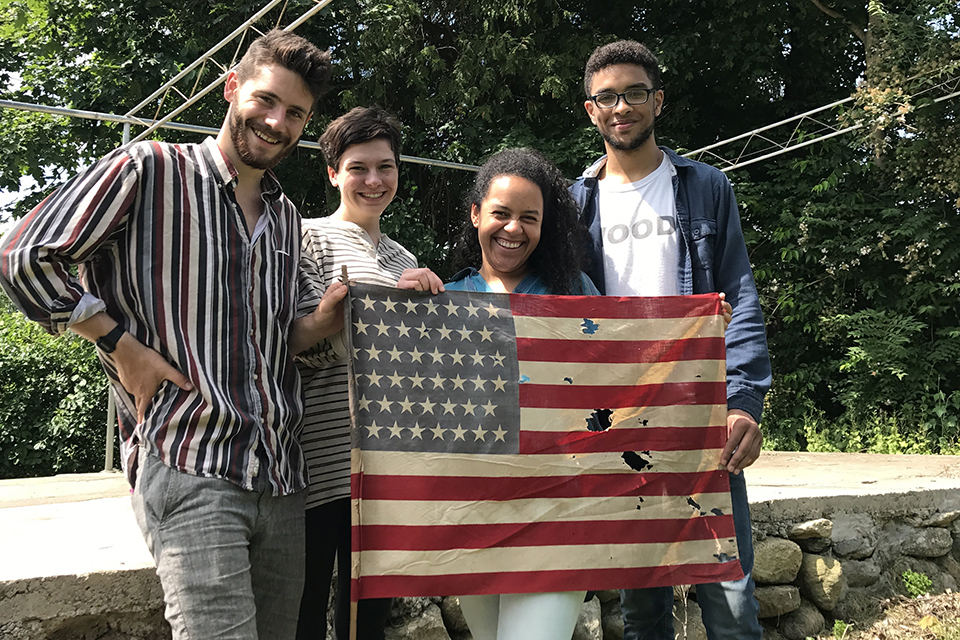 Conversano and his peers became intimately acquainted with the resident artists, sharing meals and housing, and collaborating on new work. The interns often took an active role in readings, workshops and rehearsals in addition to working on their own artistic projects.

“At times it can get out of balance at school. If you keep yourself busy enough, you don’t have to think about the hard questions like why you are here and why you are doing this,” recalled Conversano, who filmed and edited a short promotional video about SPACE on Ryder Farm for his artistic project.

“Here, you are removed from everyday pressures, far away from the world and a lot of noise. It put me in front of myself, and I had to reckon with that,” he said. “It’s given me a greater sense of purpose and desire to make work that matters and is from me, rather than accommodate to what it seems like other people want from me.” 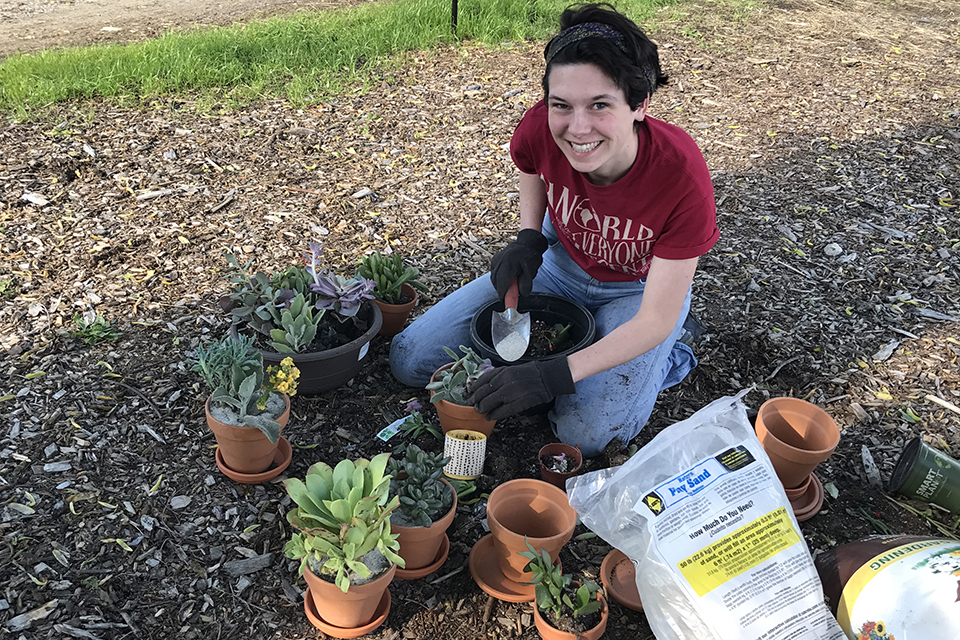 Margaret Gayford works in the garden at SPACE on Ryder Farm.

The communal experience of living and working with cutting-edge playwrights inspired Gayford to finish her first full-length play. “It was a play that I needed to write to get it out of my system so I could write and create other things, but it wasn’t a play I want produced,” she explained. “The others knew this, and there was no judgment from the community there.”

Gayford received professional feedback on her work and, at the end of the internship, felt comfortable sharing it in a warm and welcoming environment. She returned to UNCSA with her mind opened to a wide range of career possibilities.

“I met people that I never would have had the chance of meeting without this internship — playwrights at all different levels of their careers,” Gayford said. “I learned everyone finds their niche in the creative world through winding paths and no one’s path looks the same. I had my mind opened to the broad array of opportunities there are to be an artist and an activist in this world.” 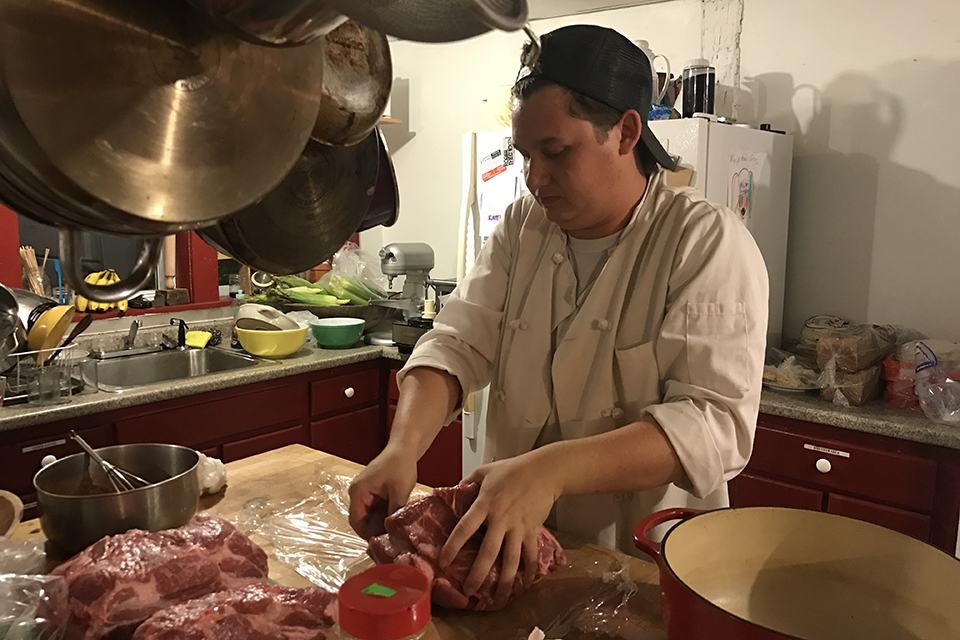 Tyler Campbell works in the kitchen at SPACE on Ryder Farm

For his project, Campbell directed a scene from a Kimber Lee play — "brownsville song (b-side for tray)”  — about a senseless act of gang violence and how it alters the life of a high school senior in Brooklyn.

Then he got to meet the playwright herself. “She came as a resident to the farm. She was so humble and wonderful. We talked about life.”

In addition to supporting residents and artistic work happening on the farm, Campbell and the other interns helped manage the office, as well as maintain living and working spaces. Another of their tasks was to assist the chef in preparing communal meals. The kitchen, in fact, would become Campbell’s main stage and the two dozen artists he helped feed, a second family.

“If I hadn’t gone into acting, I would probably have gone to culinary school. Cooking is one of my biggest passions. They really noticed that in me and they allowed me to flourish in that way,” he explained.

One night the chef ceded the kitchen to Campbell, allowing the assistant to take charge of the meal. “I made North Carolina BBQ and baked beans and all this Southern stuff. I brought the South up to Brewster for the night,” he recalled.

“When I was in the kitchen I felt like I was on the stage acting. It was thrilling.”

Campbell is among the UNCSA students heading to New York City after graduation in May. His parents are worried about the move — as parents are prone to be — but he couldn’t feel more secure about the decision.

“I didn’t realize how life-changing SPACE would be. I have a family there now that I know will hold me and support me. And the artists I met, I know I can reach out to them,” he said.

“My dad always says I came into this world with a top hat and tap shoes. I’m ready to go now. It’s time to start living the dream. I have waited for this most of my life."