For UNCSA saxophone professor Robert Young, a benefit concert held this year was part of a deeply personal journey. The concert was part of The Gio Project, dedicated to Young's infant son, Gianni, or Baby Gio, who was born with a congenital heart defect known as hypoplastic left heart syndrome (HLHS).

"In 2019, my wife and I had identical twins," Young says. "One of them, Gio, was diagnosed with HLHS. Essentially, he spent his entire life at Duke Hospital. After a little over 8 months, he passed away from HLHS because he wasn't able to get the surgery that he needed."

During those 8 months, Young thought a lot about what he could do to honor his son. "Music is my best tool. I decided to figure out how I can use music and Gianni's name to promote, advocate and make the lives of other kids who are going through these heart conditions better."

In that spirit, The Gio Project came about. The virtual concert featured a mixture of music and information about congenital heart defects presented by Young and his wife, Amir Young. The concert was supported in part by UNCSA and a Faculty Leadership Grant from the Thomas S. Kenan Institute for the Arts. Proceeds were donated to the Mended Little Hearts of the Triangle.

The Gio Project virtual concert raised more than $8,000 for Mended Little Hearts, who then distributed the funds to pediatric units at UNC and Duke hospitals. Young's focus for the concert was to not only make it a musical experience, but an informative one as well.

Two pieces served as the cornerstones of the concert. "The Solitude of Stars" was written for Young in memory of Gio by Chicago-based composer Stacy Garrop. The second was a transcription by Young of William Grant Still's "Mother and Child." Young played saxophone and Polina Khatsko was pianist for the concert.

The Youngs were touched by the outpouring of support the concert received. "It was overwhelming," Young says. "We had a great turnout online. There was support from around the country. Even after the fact, just to see that kind of support from our friends, family and coworkers that wanted to help a child — that maybe they don't even know — it was great to see that."

That support underscored his goal of raising awareness. "We decided to share our story because we can and we had the means to do it in a special way," Young says. "Sitting in that hospital in the intensive care unit day in and day out, you see different families go in and different families go out and everyone's dealing with different things.

If we can give hope to another family or make another kid in the intensive care unit smile, I think that was the most meaningful thing and probably the main reason that we started The Gio Project. Of course to raise awareness, but also to raise hope.

"We had our son going through that journey. Our son didn't make it — but if we can give hope to another family or make another kid in the intensive care unit smile, I think that was the most meaningful thing and probably the main reason that we started The Gio Project. Of course to raise awareness, but also to raise hope. It's a serious condition but people do come out of it."

Young received support for the concert in part from a Faculty Leadership Grant from the Thomas S. Kenan Institute for the Arts at UNCSA. The Institute distributes grants annually in support of projects that give the school's faculty members opportunities to explore new approaches to creative learning challenges; impact student learning outcomes; foster the capacity of faculty to lead; engage diverse stakeholders; and produce creative ideas, analysis, strategies and initiatives for further study or implementation. 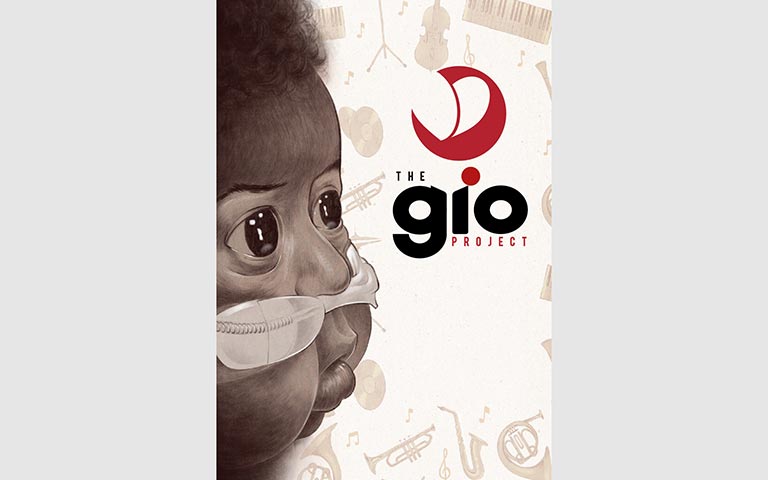 "The biggest thing going into the concert was I wanted to do it with excellence and quality. And of course that can be expensive," he says. "Getting the grant took that burden off of my shoulders and I could just focus on the product and know that everything was going to be taken care of. The Faculty Leadership Grant was crucial to the success of this event."

To learn more about Mended Little Hearts of the Triangle, visit the organization's Facebook page. More about The Gio Project can be found on Young's website.