Imagine a job where you collaborate with different coworkers every week on a carefully planned schedule with millions of eyes on you as you work. Now, imagine that job is The Late Show with Stephen Colbert and you are a member of the house band, Jon Batiste and Stay Human. For UNCSA alum Eddie Barbash (HS ’07), that’s an everyday reality.

Barbash, who plays saxophone in the band, has already had some pretty awesome moments on the show, which began with Colbert as the host in September 2015. One of the highlights so far, he says, has been performing “The Swan” by Charles-Camille Saint-Saëns with cello legend Yo-Yo Ma.

“One of the things they are trying to do with the show that I love,” Barbash says, “is that they have the house band play with the musical guests as much as possible.” Guest artists like Yo-Yo Ma, Vance Joy, CeeLo Green and Darlene Love, Elvis Costello and Steven Van Zandt team up with Jon Batiste and Stay Human for special performances and web exclusive videos that can all be watched on The Late Show’s YouTube channel. 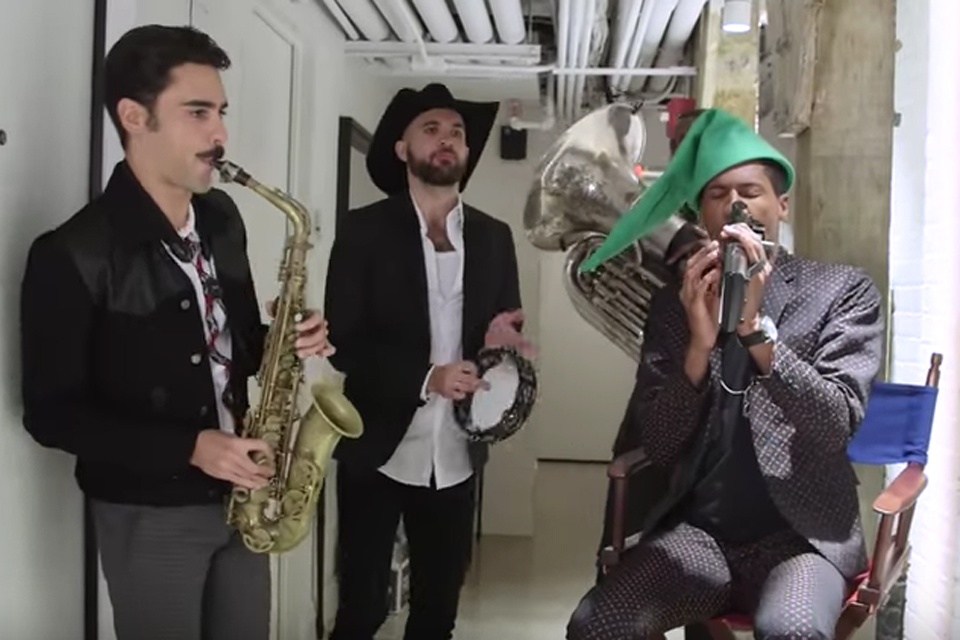 It certainly makes for a pretty interesting work experience. But Barbash has had no shortage of opportunities to play with incredible musicians since his high school years in the UNCSA School of Music and throughout his subsequent journey in New York City and around the world. For him, being a musician is as much about who you play with as it is about the music itself.

He’s always loved music but it was possibly after his first jazz band concert in fifth grade when he realized he wanted to be a professional musician. “I just remember I never wanted it to end. I love playing music with other people,” he says.

As a high school student in Atlanta, that passion for music began to concern his mother. “I was spending so much time practicing that my mom got worried,” he laughs. “I didn’t have a lot of friends who were also musicians, so she suggested an arts high school.”

After doing their research and checking out a few other high schools, they ended up at UNCSA. “When we came up and visited, it was awesome,” Barbash remembers. The sense of community was immediate. In fact, three of the people he met that very first day ended up being some of the most influential during the two years he spent in high school here.

Going to UNCSA was really the beginning of my life as a musician, socially,” he says. “I started playing professionally and getting paid for it. I was in a community of friends who did what I did."

Going to UNCSA was really the beginning of my life as a musician, socially. I started playing professionally and getting paid for it. I was in a community of friends who did what I did.

To him, the juxtaposition of the small-town Southern charm of Winston-Salem with the creative, artistic culture of the School of the Arts was a perfect combination. “There is a soulful, community-oriented, friendly atmosphere. It’s casual, but everybody works so hard,” he says. “Not everyone is serious and intense, but they all really love the arts. And it attracts such incredible teachers.”

Among those incredible teachers was saxophonist Taimur Sullivan, who began teaching at UNCSA the same year Barbash became a student. “He was amazing. He is great because he’s such a warm person and an incredible musician. To hear him play, he is one of the best I’ve ever heard.”

He also studied flute with Tadeu Coelho, learning the second instrument for his application to Juilliard (where he was accepted and attended for undergraduate studies). “He was one of the best teachers I’ve ever had at anything,” he says. “In two years, he taught me enough flute to get me into Juilliard. Lessons with him were always amazing.”

And then there’s the coveted job of Ron Rudkin, who directs UNCSA’s Jazz program. “He was so much fun to work with. I secretly always imagine that when I’m older, I will move back to Winston-Salem and take Rudkin’s job,” he laughs.

After graduation, Barbash moved to New York to attend Juilliard and explore the music scene. “I immediately started playing gigs and I met Jon Batiste,” he says. He transferred from Juilliard and finished college at The New School, all the while constantly playing music in New York and beyond. With Batiste, he played prestigious venues like the Kennedy Center and the mainstage at the New Orleans Jazz Festival.

They hit even greater success when they signed with a major booking agent and label, embarking on a European and U.S. tour that lasted from the summer of 2013 through 2014. “There was a nine-month period where we had no more than two weeks off at a time,” he says. “It was hard, but it was a really great experience.”

After that, Barbash decided it was time to take a break and spent the remainder of the year just practicing and playing music he loved – bluegrass and string band music, among others. He started his own band and spent time “figuring out what I wanted to do.”

In the fall of 2014, Jon Batiste and Stay Human booked a gig on Comedy Central’s The Colbert Report. “Stephen Colbert just really loved us, we were one of his favorite bands he had on the show,” Barbash says. They must have been, because less than a year later they became the house band for the Colbert-hosted Late Show.

Performing for a nationally broadcast television show has been a learning experience and has challenged him as a musician to think outside the box. “It’s definitely not like any other performance,” he says. “The way the taping works, there’s a lot of stopping and starting. And it’s not ‘our’ show or audience so we are learning how to engage them.” But after a few months, “we are starting to get into a groove.” And, of course, there’s always the added perk of working with legendary musicians and guests.

Through it all, Barbash has stayed connected to his UNCSA roots. He dates School of Dance alum Katheryn Walker and played for several years in a band, The Amigos (now Silver City Bound), with UNCSA graduate Justin Poindexter. He also frequently sees fellow saxophonists Sam Owens and Travis Calvert. Even in New York, there is a close School of the Arts community.

“Whenever I meet someone who went to School of the Arts,” Barbash says, “I always feel an instant connection. It’s special that way.”