The embers of conducting stirred in Laura Jackson as she played violin in the University of North Carolina School of the Arts orchestra. The 15-year-old from upstate New York was all about becoming the best violinist she could be. Today she is the music director of the Reno Philharmonic and guest conducts nationally and internationally. To her, music is personal, sacred, transcending and fleeting.

“It’s the love for the moment when people come together and they are deeply present with each other. Whenever we make music or whenever we engage in this art form, we are doing exactly that,” Jackson says. “It draws out of us something that makes us better than human. It brings out our very best.”

“We have to be present with each other. We have to listen to each other and respond to each other. There are very few things in our life experience that demand that kind of attention. We don’t have anything visual. There is nothing you can come back and look at tomorrow. We are sending a beautiful sound into the concert hall right now and you have to be there to experience it right now and to create it. That is what I seek. That is what I hope to create this week and every time I’m on the podium.” 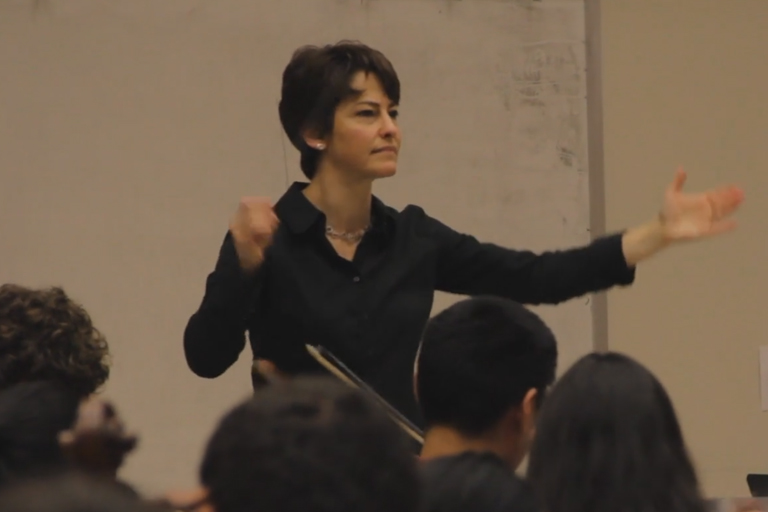 High school violin alumna Laura Jackson returns to campus as a national and international conductor and speaks about how UNCSA laid the foundation for her career paths.

Jackson (HS ’85) returned to campus as part of the North Carolina Music Educators Association Conference, held in Winston-Salem in November. She conducted its Honors Orchestra, composed of North Carolina’s most promising student musicians.

She came to UNCSA from Plattsburgh, N.Y., as a high school junior. Her violin teacher had been pushing two violin teachers that were at UNCSA. Though she says she had a wonderful public school program and a great private teacher, she really needed to be catapulted to the next level in order to make music her career and to be competitive.

“I had pretty decent fingers as a violinist but the kind of orchestral experience and the breadth of knowledge that I needed, there was no way I would have gotten that had I stayed in my lake community,” Jackson says.

She had her sights on playing in Carnegie Hall and playing great chamber music. One thing the school offered her was the orchestral experience and exposure. Inspired by the conductors coming for the concerts here, it was at UNCSA she began to fall in love with conducting.

You know the colors, the mysteries of orchestral music was so fascinating to me, but it was also watching the different interpreters and what they would do with the same orchestra -- with all of us and make us sound different. They would push and pull and challenge us in many directions. That is what laid the foundation for me falling in love with orchestra and with interpreting great orchestral music.

“I was so amazed not only by the orchestral repertoire but the incredible organism an orchestra is,” Jackson says. “What all the different parts of an orchestra are doing to bring together to create this beautiful sound one after another, one great crescendo, one great climax after another. You know the colors, the mysteries of orchestral music was so fascinating to me, but it was also watching the different interpreters and what they would do with the same orchestra -- with all of us and make us sound different. They would push and pull and challenge us in many directions. That is what laid the foundation for me falling in love with orchestra and with interpreting great orchestral music.”

Jackson pursued her undergraduate degree at Indiana University where she studied both violin and conducting. After spending several years as a professional violinist, she started conducting on the side. Later she earned her doctorate in orchestral conducting from the University of Michigan.

I loved looking at these great works of genius and the challenge of finding my own voice within them is what pulled me into conducting.

“I never thought I would switch, but I did,” she confesses. “I decided that was where my real opportunities were coming, but also I was better suited for it. I loved the creative aspect. I loved looking at these great works of genius and the challenge of finding my own voice within them is what pulled me into conducting.”

She’s not just staying in the concert halls. Jackson has been infusing new ways to bring orchestral music to new audiences. In Reno, they offer a Conduct Us event where a small orchestra is placed in a park with a sign on the podium asking people to come and to conduct them. (Watch a video of a Conduct Us event.) 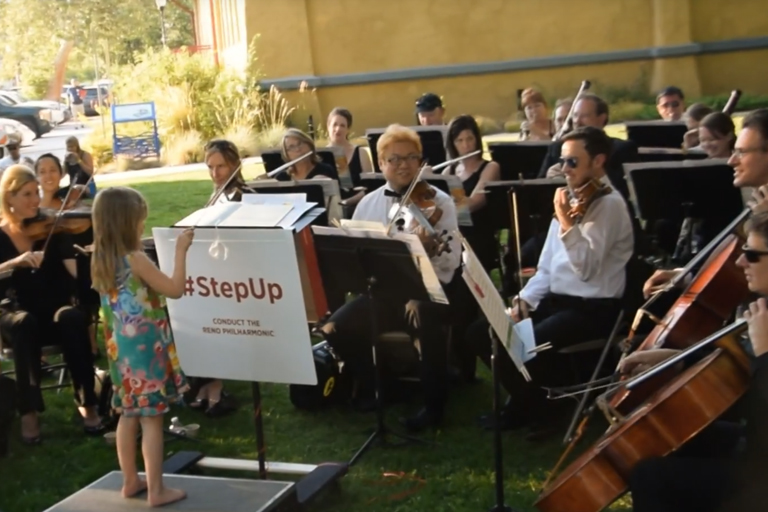 As part of Jackson's efforts to bring new audiences to orchestral music, the Reno Philharmonic does a Conduct Us in area parks.

“I’m off hiding and watching this because it’s about me being absent and someone getting up the nerve to walk up, step up and pick up the baton, then play with sound,” she explains. “We have pieces for kids – everything from ‘Pop Goes the Weasel’ and ‘Hot Cross Buns’ to Mozart’s ‘The Marriage of Figaro’ and various pieces. We have had everybody from age 4 to age 80 come and have a great time. One of the best things about it is not only the way they engage with sound and realize that its vibrant and changeable, but they also develop friendships with our musicians which is so incredible valuable.”

Jackson’s view from the conductor’s podium spurred her Leadership of Note workshops where she takes CEOs and business leaders and sits them beside musicians in an orchestra and on the podium. Not only do the business people get to play with sound, but they learn skills on team structures, leading teams and bringing out individual talents for solo parts. (See a video of what happens in a Leadership of Note workshops.)

“They are learning how to persuade people to do what they are asking and how to do it with energy and vibrancy,” she says. 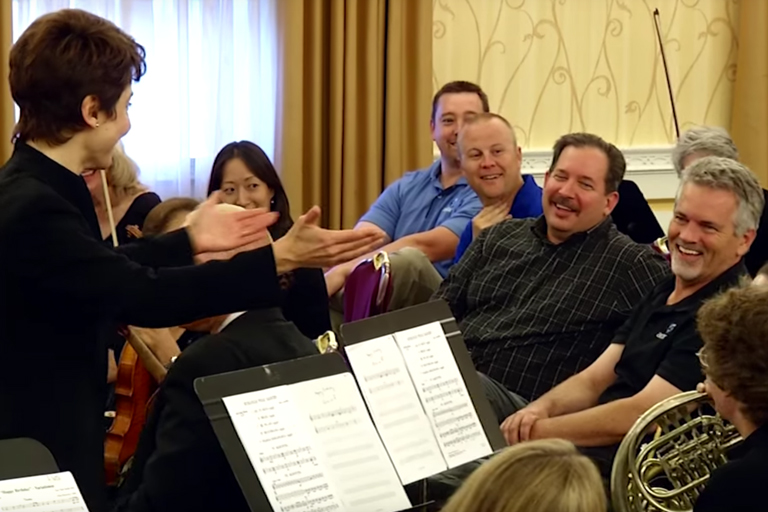 Jackson conducts a Leadership of Note workshop with business leaders on how to lead teams and to bring out an individual's talents.

The skills Jackson learned as a musician have translated well beyond the concert stage. The use of body language, silence and timing, she believes, gives musicians a special ability to translate and to communicate well with others.

“I think one of the most exciting things that I’m seeing in conservatories and music schools around the country is entrepreneurial thinking and entrepreneurship,” Jackson says. “Programs are springing up where artists of all types are thinking much more proactively: What are my strengths? What can I offer that is unique? They are no longer sitting and waiting for the phone to ring or climbing a specific ladder. Now it is about who am I? How am I different from everybody else? How can I hone my skills? How can I do something that no one else is doing and make a business out of that?”