School of Music alumnus Ludwig Carrasco (M.M. '01) spent much of the past two decades traveling around the world, studying and performing music in the United States, Europe, Asia and Latin America. In the last two years, though, he's found himself back in his home country of Mexico as Artistic Director and Chief Conductor of the Orquesta de Cámara Bellas Artes in Mexico City.

He began that role in September 2019, with a debut concert in October. "This chamber orchestra is the most important in the country and in Latin America," Carrasco says. "I'm very honored to be a part of it."

His first full season began in February 2020, about a month before the coronavirus pandemic shut down the country. While the pandemic has certainly restricted his work as conductor, he's found other ways to continue his artistic mission, which includes presenting works by unknown or little known composers.

Carrasco shared with us some of his current projects, how he's adapted to the pandemic and his work of illuminating Mexcian history and composers.

Part of Carrasco's mission as a musician, both during his time with the Orquesta de Cámara Bellas Artes and before, has been to shed light on unheard and underrepresented composers through his programming.

Recently, he's undertaken a project to promote Mexican composers, both contemporary and historical. As 2021 marks the 200th anniversary of Mexican independence from Spain, this project is especially timely.

"We want to build national awareness of our composers from at least the last 200 years," he says. To that end, he's been working with musicologists and historians for months to unearth and translate historical works, with an aim of 10-15 pieces for the orchestra to perform.

Other such projects have included organizing a concert of works by all women composers. "I was raised by women and a lot of my colleagues have been women … why should we be limited to just European male composers?" Carrasco says.

And even before he joined the orchestra, the group regularly performed for communities who are not usually exposed to live concerts, like inmates and those with cognitive disabilities — something Carrasco embraces wholeheartedly. "One of the most touching things is to share music in that way," he says. "It's really beautiful to be a part of."

Having the time to dedicate to some of these other projects is at least one unexpected consequence of the pandemic and its restrictions. In Mexico,, there is a limited capacity to stream orchestra performances, but Carrasco says he's been able to take advantage of the time in other ways.

Another such project is the new edition of a violin concerto by Mexican composer José F. Vásquez (1896-1961), which was released in early February 2021. Prior to the February edition, Carrasco says, "This has only been played one other time since it was composed — by me. This is a big concerto that no one knows."

"Before the pandemic, I was so busy conducting," Carrasco says. "I was doing 50-60 concerts per year. Suddenly, there were none."

"I started several projects I didn't have time for before," he says. "And last fall, I was very busy with virtual seminars, conferences, masterclasses." At the end of the season, he counted 93 such events on his calendar. Despite the hardships of the crisis, he has found ways to continue practicing and sharing his art. That's something he encourages others, especially students, to do.

This is a difficult time for students, but they should make the best out of it. There are great opportunities through the internet. You can take a masterclass with someone who is 10,000 miles away without ever leaving your home. That wasn't possible even a few years ago.

"This is a difficult time for students, but they should make the best out of it. There are great opportunities through the internet. You can take a masterclass with someone who is 10,000 miles away without ever leaving your home. That wasn't possible even a few years ago."

The journey to conductor

Carrasco began his college studies in music and violin on the East Coast of the U.S. After completing his undergraduate degree in Virginia, he decided to pursue graduate studies in violin performance at UNCSA.

He was familiar with the school from friends and colleagues and drawn to it for the financial and personal growth opportunities it offered him. "They had a great scholarship program and the tuition was accessible for me," he says, especially when compared with private institutions. (His sister, Laura Carrasco-Curíntzita, also earned an M.M. at UNCSA in 2001, in organ performance.)

During a visit to campus, Carrasco says the relative calm of Winston-Salem was incredibly appealing. "I was attracted to it as a city that's not as active as other places," he says. "In New York City, I would be distracted by the city. UNCSA was a great environment to focus on my studies. It was a competitive environment, even though it was friendly, and the faculty were very supportive."

Following graduation, he spent many years performing and touring across the world. Then, during another global crisis Carrasco made the decision to focus on conducting.

As a musician in orchestras and chamber groups, Carrasco says "I was feeling a little bit constrained with how the music was presented. … There's a limit to the feedback you can give, even as concertmaster. There's only so much space to influence." That led to the realization that he wanted to lead as a conductor.

He began taking workshops. Then, while living in Spain in 2008, the Great Recession happened. As concerts and other performances were cancelled, he recognized an opportunity to further his studies. He moved back to the U.S. to pursue additional graduate studies and, later, doctoral work.

"Since then, my focus has been mainly conducting," he says.

Returning to his home country

As a student and professional performer, Carrasco traveled around the world extensively. His current role landed him somewhat unexpectedly back in his home country of Mexico. 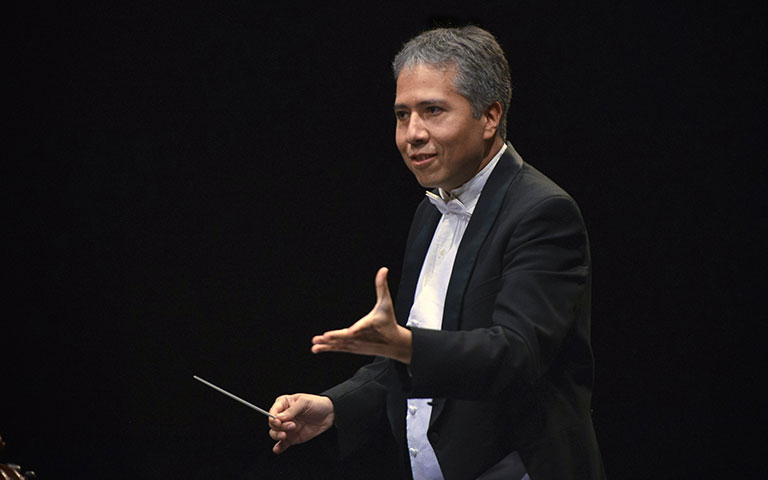 "I was not thinking about going to Mexico," he says. As he pursued a conducting career, he knew there may not be as many opportunities there. Then, he had the opportunity to finish out a season with the Orquesta de Cámara Bellas Artes.

"They told me there wasn't much budget, but I needed the opportunity and experience. It was supposed to be a week and I'd be gone," he says. He looked forward to the chance to spend time close to home and visit with family and friends, for what he imagined would be a short visit.

But, the organization liked him and the opportunity was a rare one. He went through the screening process and, several months later, he got the job.

"I have mixed feelings about Mexico," he says. "It's so beautiful, there's so much human warmth. But there are also a lot of social and economic problems. … But nowhere else have I had so many opportunities to do projects that improve the quality of life for people and help the culture."