School of Music alumna Rebecca "Bex" Nelson is a Ph.D. student at UNC.

Rebecca "Bex" Nelson sees mathematics in everything. And more than four years removed from her days in the high school program at UNCSA, the 2017 School of Music graduate can still point to the essay she wrote her junior year when she came to realize and appreciate the ubiquitousness of the discipline.

"I really love interacting with mathematics in the world and seeing them in the natural and physical world," Nelson says enthusiastically. One of the times she first thought about this was when she discovered how much she liked fractals, essentially mathematical shapes that repeat themselves in patterns that look very similar at different scales. "I wrote a paper my junior year at UNCSA about fractals in nature and the way branches on trees grow and how shells are formed."

She began to follow that thread as a high school student, dually enrolling at UNCSA, where she studied clarinet, and at the North Carolina School of Science and Mathematics (NCSSM), where she took online courses.

That path continued through her undergraduate career at the Massachusetts Institute of Technology (MIT) and in her current role in the Ph.D. program at the University of North Carolina at Chapel Hill (UNC). Throughout that time, she has continued playing music — and she traces her willingness to pursue her passions to her days at UNCSA.

Nelson spent four years in the School of Music before moving to Massachusetts to attend MIT for her undergraduate studies. "I spent a long time in my senior year deciding whether I wanted to major in clarinet or mathematics," she recalls. "I really wanted to do both."

She eventually landed at MIT, where she spent time in both the mathematics lab and the orchestra pit — she majored in applied mathematics and business analytics, with minors in music and computer science.

"The [MIT] experience was actually really similar to UNCSA in terms of all of these people being together and just doing what they loved doing," she says. 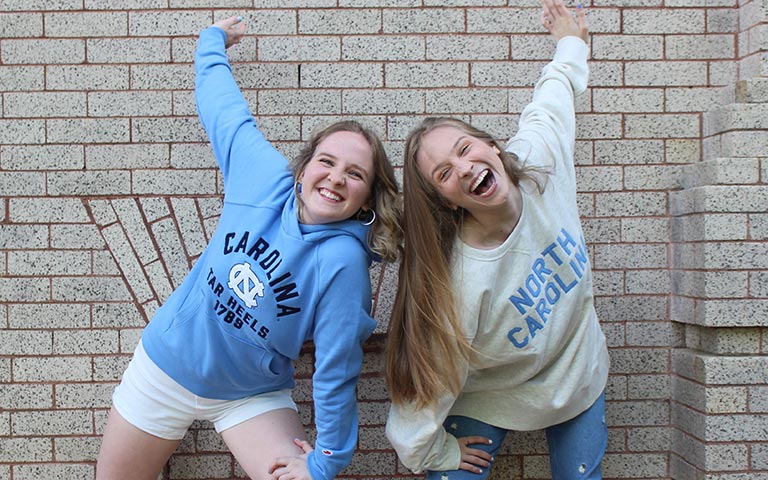 Nelson (left) and her younger sister Irma are both UNCSA graduates and current students at UNC.

In the spring of her junior year, though, the COVID-19 pandemic hit. She headed back to her family home in Mebane, N.C. and adjusted to being a remote college student. She was at home with her younger sister, Irma, then a high school student studying piano at UNCSA.

It was during the summer of 2020, working and studying from home, that Nelson discovered what her next step was going to be. She had been planning to spend the summer at an internship in Illinois. Instead, she found herself working remotely, but with a new opportunity to help one of her professors with a research project.

She knew then that she wasn't done learning and decided that graduate school was her next step. After many applications and many more decisions, she found herself back close to home — studying applied mathematics as a Ph.D. student at UNC.

She is currently in her second semester of coursework in the applied mathematics program, where she is also the recipient of UNC's North Carolina Excellence Fellowship. And she's once again studying with younger sister Irma, who graduated from UNCSA in 2021 and is now an undergraduate at UNC.

A vital part of her math studies, Nelson says, has been her role as a teacher and mentor for students of all ages. One group that she joined in Cambridge as a student at MIT has been particularly meaningful. She is a mentor and teacher with Girls' Angle, a math club for girls ages 8-15, a role she has been able to continue online from North Carolina.

"This is a place for people to do extracurricular mathematics that is not competition," Nelson says. Its importance to her is twofold — to help close the gender gap in the field and to show young people the joys of math in a collaborative, non-competitive environment.

"They get to be in an environment where we're learning about topics outside of the school curriculum," she says. "They are focused on doing it together and exploring math that isn't just 'study this for your next school test.' This is just math for fun."

One of her favorite lessons to teach is modular origami, where individually-folded origami pieces  are combined together to create a plethora of shapes. 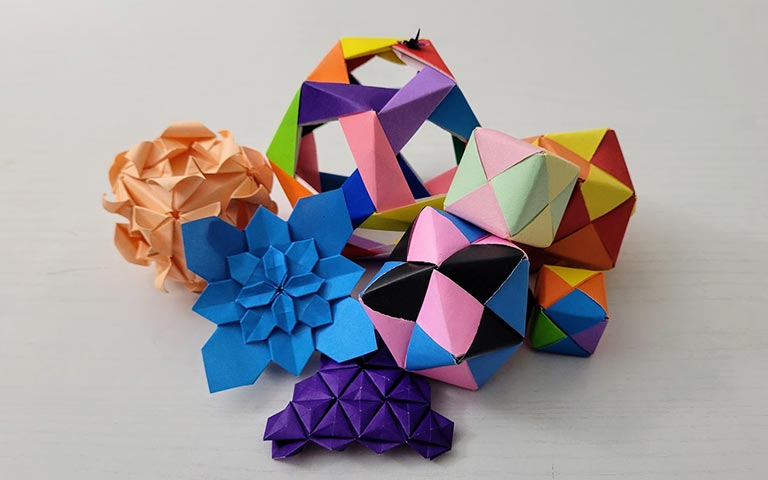 "I really like thinking about how to teach topics in mathematics in a really approachable way for each student," Nelson says. "I love knowing that math can be displayed in a lot of different types of ways."

Pursuing what she loves

Nelson has spent the last several years following her curiosity and exploring her passions. She traces that willingness to reach for things she wants to her time as a student at UNCSA.

"UNCSA helped me in a lot of ways, especially in confidence in myself in pursuing the things that I love," she says. "UNCSA is so great at encouraging you by saying, 'Is it something you love? Go do it, go get it.' I have never felt that there was something that I couldn't reach for. I think that's a wonderful attitude to instill in young people."

She recalls how she felt as a high school musician knowing that she was going to study and play music alongside graduate students. "I was so nervous when I first got there as a freshman to play with graduate students in the same master class," she laughs. "I love that about UNCSA, the integration between all of the different age and skill levels. It's so good to be exposed to people who can be role models and mentors and inspire you."

She has turned those lessons into advice that she shares with current students. As a speaker at the 2021 UNCSA High School Convocation, she encouraged students to take advantage of those resources.

"Don't be afraid to reach for things you care about and work really hard for things that matter to you," she says. "UNCSA exposed me to a lot of new ideas and new information and ways of being passionate. That was super fundamental to my growth as a person, an artist and a student."