On New Year’s Eve, School of Music alumna Nia Franklin performed the National Anthem at the Military Bowl in Annapolis, Maryland. The day before, she performed in the Citrus Parade in Orlando, Florida. Since being crowned Miss America on Sept. 8, 2018, the composer and classically trained opera singer has performed with the Bay Atlantic Symphony in New Jersey and at Philadelphia’s Thanksgiving Day parade. But throughout her reign, Franklin will use her voice for more than singing. She has dedicated her year as Miss America to advocating for arts education.

That’s music to the ears of Chancellor Lindsay Bierman. “Nia is a remarkable young woman who embodies the power of the arts to enrich and transform lives,” he said after she was crowned. “Now she has a powerful platform to advocate for one thing she has always cared about most deeply, something very near and dear to the hearts of everyone at UNCSA, the guiding principle that has saved the lives and souls of so many of our nation’s youth: the value of the arts, of artists, and of arts education.”

Advocating for the arts

Franklin is taking full advantage of her platform. After kicking off a publicity tour on ABC’s “Good Morning America” and the syndicated talk show “Live with Kelly and Ryan,” she interviewed with countless media outlets and organizations like the National Association for Music Education (NAfME), spoke at a gathering of the American Society of Composers, Authors and Publishers, and visited a host of elementary schools.

“In the last three months, one of the biggest highlights of being Miss America has been being able to use my voice to share the importance of arts in education from speaking in schools across the country to performing at the Lincoln Center and to taking every media opportunity to continue expressing just how vital the arts are in schools,” she said in a social media post in December 2018.

This weekend wouldn’t have been the same without you! You were phenomenal on the panel discussion about arts being vital in our society. Thanks for being a friend, mentor, and my attorney 💁🏾‍♀️ Love you, Cheslie! 💛💛

Today I’ve been reflecting on the teachers who encouraged me to follow my passion for the arts AND my academic goals. From Mrs. Piatkowski (my high school English teacher who opened my eyes to things a novel alone couldn’t teach), to Lorrie Coltraine (my freshman English professor who helped me gain more confidence in myself as a writer), to my undergrad and graduate music composition professors (who pushed me to think outside of the box), and to my mom (who constantly teaches me unforgettable life lessons.) The list goes on and on. I can’t imagine going through school and life without the INCREDIBLE educators that I’ve been blessed to know. I truly believe my love for music strengthened my desire to achieve academic excellence. #teacherappreciationweek

Advocating for arts education comes naturally for Franklin, a Winston-Salem native who has been surrounded by music throughout her life, even composing her first song at the age of six.

“I participated in choir throughout my school years. I was fortunate that my parents could pay for lessons,” she said during a panel discussion at UNCSA in November. “There are children who don’t have art in their schools simply because of where they live.”

After high school, Nia headed to East Carolina University in Greenville to study music composition, but her education plan was nearly derailed when her father was diagnosed with a rare form of lymphoma. She underwent a stem cell transplant for her father, essentially saving his life. Faced with finding a way to help pay for school, Franklin entered and won a campus pageant that emphasized service, scholarship and talent. Friends urged her to enter the Miss North Carolina competition for additional scholarship money. She competed as Miss Capital City in 2016, establishing music education and lymphoma research as her service priorities.

After graduating from ECU, Franklin enrolled in the UNCSA School of Music’s graduate composition program, studying with Lawrence Dillon.

“Dr. Dillon …was so inspiring to me,” she recently told NAfME. “His thoughts about music were very similar to mine, so I felt as though I was on the right track in a lot of ways because of that.”

While at UNCSA, Franklin’s passion for music education and her drive to serve led her to ArtistCorps, an artist-driven AmeriCorps-based program that places UNCSA students in public schools and community-based institutions to work with high-needs students.

Franklin believes every child should be exposed to music from a young age. Music fosters creativity and enhances the development of motor skills at a young age, she said, and builds confidence and a sense of community. 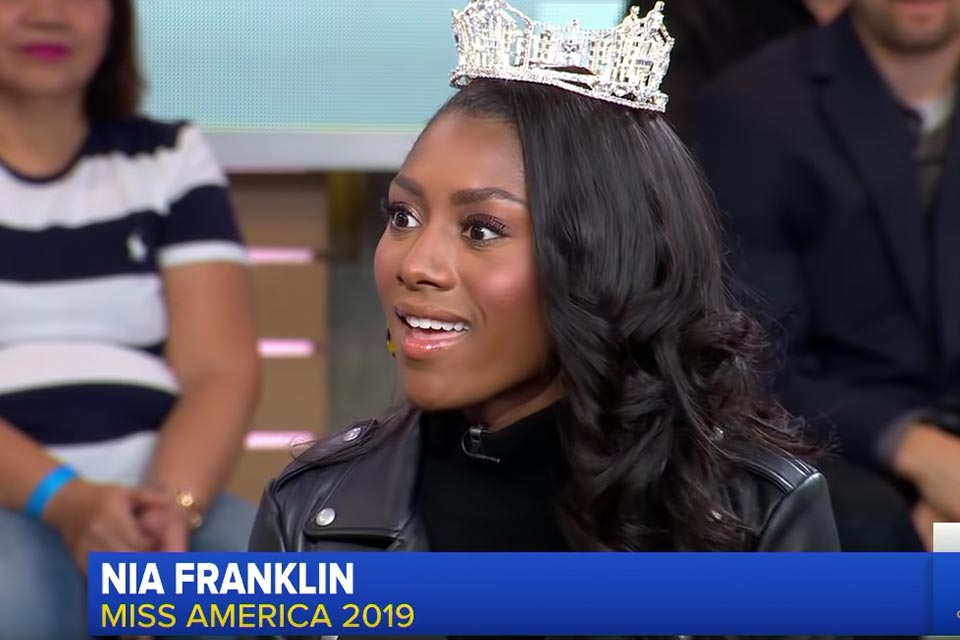 “With ArtistCorps, I was going into different sites teaching music in schools and preschools that didn’t have it,” she said, adding that she met a two-year-old named Noah who had limited vocabulary, a very short attention span and no ability to focus.

“As the year went on, I was able to get him to focus on the music and become more engaged in what I was teaching,” she said. Exposure to music turned Noah’s life around, increasing his vocabulary from about 20 words to 100 during the year.

“I created one activity where the students could play one note on the piano at the end of class, and they all loved it. This tangible activity was where I began to notice a big difference in their attitudes when it came to paying attention and understanding how music is made,” she said.

“It was in that year that I knew I really have to go farther with my love for music.”

Dean of Music Brian Cole said Franklin is a strong voice for the power of art to transform lives. “Through her work with ArtistCorps, she witnessed how exposure to music in particular improved children’s capacity for learning,” he said. “The arts and arts education have a very powerful advocate in Nia.”

Franklin received a Master of Music in 2017, and was awarded a Kenan Fellowship at Lincoln Center Education. In New York, she collaborated with Success Academy Charters Schools and as a cultural partner with Sing for Hope to reach as many students and communities as possible. She competed in the Miss New York competition as Miss Five Burroughs, winning preliminary competitions in swimsuit and talent for her performance as a classical vocalist.

After winning the Miss America crown, Franklin said music helped her find herself as young black woman. “I grew up at a predominantly Caucasian school and there was only five percent minority, and I felt out of place so much because of the color of my skin,” she said. “I found my love of arts, and through music that helped me to feel positive about myself and about who I was.”

During the November homecoming festivities on campus, Franklin performed original compositions on piano before headlining a panel discussion, “Women Power the Arts, the Arts Empower Women.” Participation in the Miss America program has taught her the importance of building a strong network of supportive friends and colleagues, another message she hopes to promote.

“I want to be the voice and advocate for young girls and women that had no idea that they could even write compositions and notate music,” she said.