Taylor Fleshman has spent her time since graduating from the UNCSA high school music program making a name for herself in the world of harp. Just in the last few years, Fleshman has performed with renowned orchestras including the Cincinnati Symphony Orchestra, Richmond Symphony Orchestra, the Cincinnati Chamber Orchestra, Kentucky Symphony Orchestra and the Civic Orchestra of Chicago. Additionally, she has received numerous accolades including the first prize of the 2018 Pacific Region International Summer Music Academy's concerto competition and second prize at the North International Music Competition. 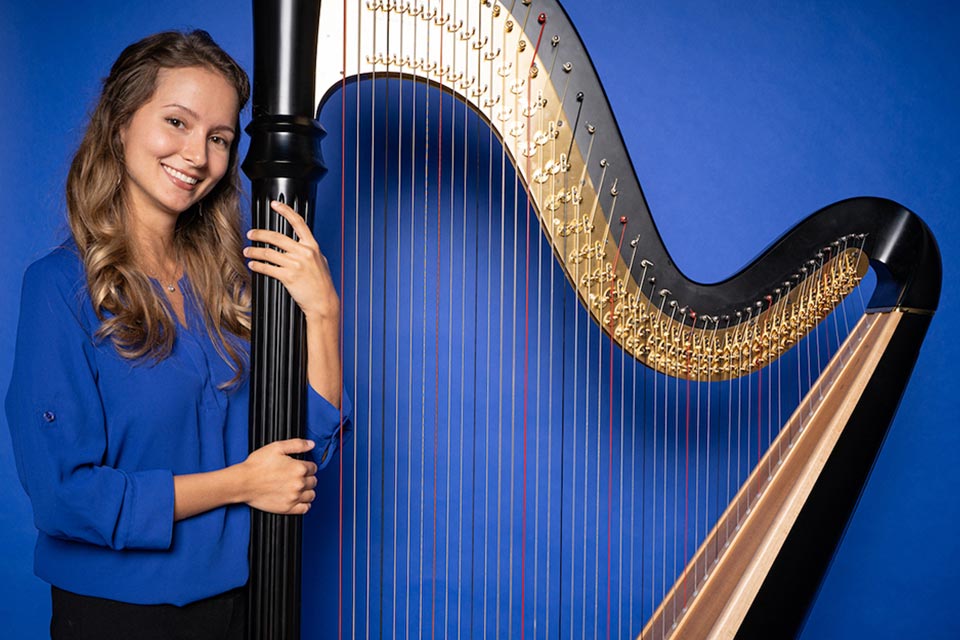 In 2019, Fleshman had the opportunity to premiere and create the first ever recording of Alexander Mosolov’s “lost” Harp Concerto with the Moscow Symphony Orchestra and the NAXOS Music Label in Russia. Mosolov, who is considered one of the foremost composers of the Russian avant-garde era of the 1920s, never published the piece and it was only performed once, in parts, in 1939. After the handwritten parts were discovered in a library in Moscow, NAXOS took interest in bringing to the world this repressed Russian composer. After almost two years of waiting, the CD was released in December 2020. It quickly reached the top spot on Amazon.com in the “Symphony” category.

We caught up with Fleshman to learn more about her time at UNCSA, continuing music education and exciting future as an in-demand harpist:

Tell us about your current and/or upcoming projects:

An arrangement of Ravi Shankar’s “Sandhya Raga,” which was put together by my University of Cincinnati colleague, Vidita Kanniks, will soon be released. I have concerts with The Orchestra Now in New York this Winter, and  I also have a potentially amazing opportunity that would involve dabbling in Latin music. 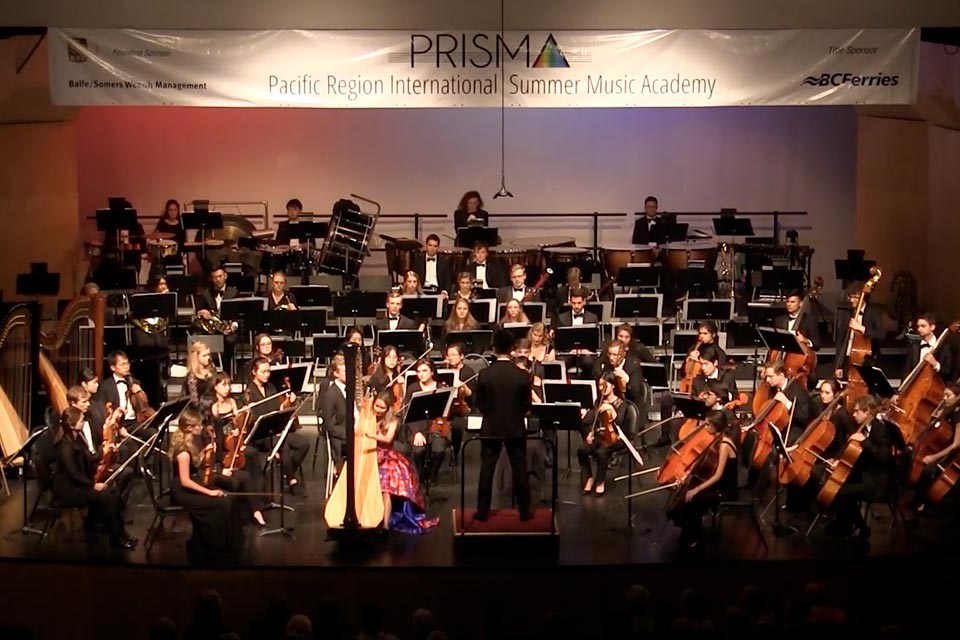 What have been the highlights or most significant moments of your music career so far?

My top highlight was performing Mosolov’s “Harp Concerto” in Moscow, Russia. It was surreal to be in the country where the piece was composed and to be in the same hall where it premiered in 1939. It was a moment you always fantasize about, but then it came true. I kept thinking, “pinch me, I must be dreaming!” Another highlight of my music career was performing live with the band Evanescence in Carmel, Indiana. I grew up listening to them and absolutely loved them. Never did I think that this rock band would need a harpist in one of their performances.

COVID-19 has undoubtedly changed all aspects of the entertainment industry. How have you been staying creative over the last year?

Much like most people, my creative output has been collaborating through solo and chamber recorded projects. Another way to keep my mind fresh has been attending and performing in video master classes.

Why did you choose UNCSA for high school?

I chose UNCSA because I wanted to further my studies as a musician and harpist, and ultimately make music my profession. I wanted to be immersed in an environment where the people are following the same dreams and are committed to doing their best. I found that UNCSA could offer me this. I also really loved being surrounded by artists and creativity constantly.

I wanted to be immersed in an environment where the people are following the same dreams and are committed to doing their best.

What advice do you want to share with current or prospective students?

My advice for students is to believe in yourself, work hard and go for it! When I was considering UNCSA as a school, I did not think I would be good enough to get in. But the only way you know is if you try.  Lo and behold, I was accepted! I felt the same way about performing in Performance Hour (a weekly forum for students to perform in public before their peers and the faculty) and auditioning for colleges. Along the way, there were some opportunities that I did not get, but the most important thing is that I kept pushing, and trying and doing my best.

Harp professor Jacquelyn Bartlett was a great influence in my life and career. I really love the passion and drive that she has for her students and instrument. She taught me one of the most important lessons in my life: “there are no excuses.”

What was your favorite performance/project you worked on at UNCSA?

My favorite performance at UNCSA, by far, was “The Nutcracker” in 2013. The score has a beautiful, yet challenging harp part, and it is a big part in the orchestral repertoire, which is something we do not get often. Bringing together all the art forms, such as ballet, orchestra, lighting, and costume and design, is a cathartic experience. I was so sad when it ended! 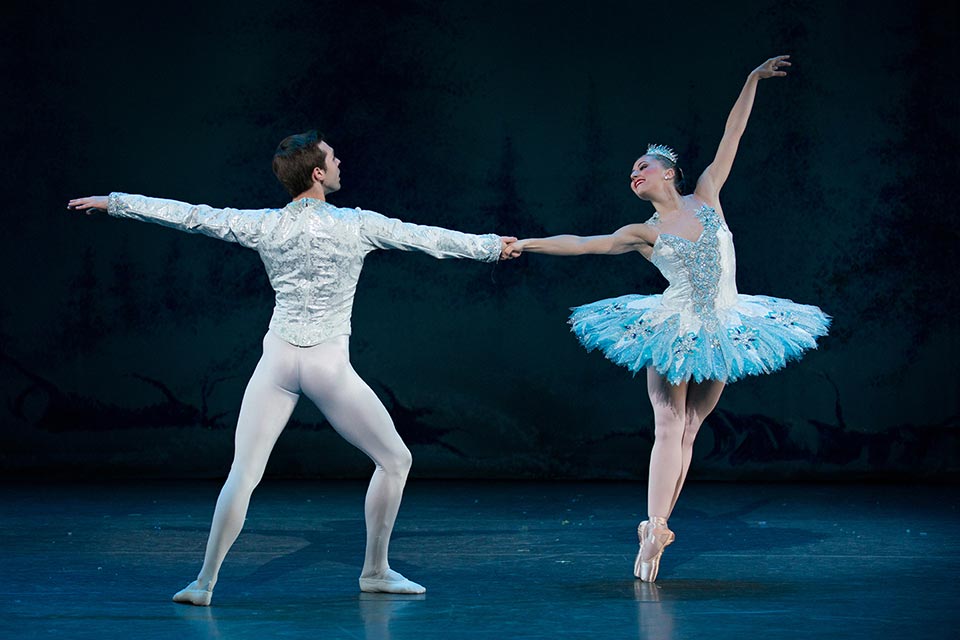 Fleshman's favorite performance that she participated in during her time at UNCSA was the 2013 rendition of "The Nutcracker." / Photo: Peter Mueller

Talk a little about some challenges you've encountered in your music studies and how you've overcome them:

I think one of my biggest challenges during my music studies is trying to not compare myself to other colleagues in my field. There will always be someone better than you out there, an opportunity that you were dying for but someone else obtained or a specific path that many other people are following. That can build up a lot of pressure, creating so much turmoil. I remind myself along the way that my path can look different yet still be rewarding and successful. There is not a cookie cutter path in the music field.

One of my favorite things to do while traveling is trying different food from the culture. Eating Fugu is on the top of my “food-to-try” bucket list from Japan.